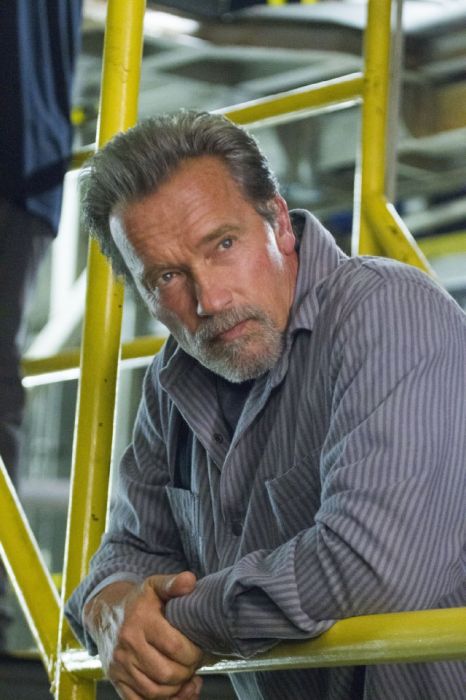 Director :   Mikael Hafstrom
Year Of Release :   2013
Principal Cast :  Sylvester Stallone, Arnold Schwarzenegger, Jim Caviezel, Vinnie Jones, Vincent D’Onofrio, Sam Neill, Curtis Jackson, Amy Ryan, Faran Tahir.
Approx Running Time :  115 Minutes
Synopsis:  Professional escape artist Ray Breslin finds himself incarcerated in a secret, maximum security prison, double crossed and in serious trouble.
What we think :  Throwback to the glory days of 80’s B-movies, Escape Plan delivers some minor thrills and “Prison break” hijinks, although it’s let down by inane dialogue and even worse acting (especially from Jim Caviezel, having the time of his life, no doubt). The film offers a glimmer of humor, plenty of masculine thuggery, and a whole slew of expendable (ha!) action moments that, when you think about it, aren’t really all that awesome; the film is a pleasant diversion, but it will never be a classic.

Escape is the only option.

The resurgence of 80’s action superstars Sly Stallone and Arnold Schwarzenegger comes with a cost. For every Expendables mash-up and Rocky Balboa, we have to endure a film like Escape Plan. I say endure like it’s a bad thing, but it really isn’t. Escape Plan feels like the kind of film big stars did back in the day to while away the time until a major project came their way. It’s got production value, a couple of major Hollywood players, and a terrific set-up, but it’s all played somewhat for laughs, as if we should all be in on the joke that people get paid to make these kinds of films. Escape Plan isn’t a great film, but it is a fun one. Removing my Oscar-loving hat for a moment, it’s films like these, not your 12 Years A Slave or Zero Dark Thirty’s of the world, that make me want to be a film critic. And by critic I mean somebody who enjoys film simply for the sake of itself; I go into every film I watch expecting to be entertained, although to what fashion you class “entertainment” will depend on your mood, your sense of humor, or the narrative of said film. I went into Escape Plan hoping to be entertained in the best possible way – watching two nearly-70ish Hollywood legends have a cracking good time at a prison escape film. Both men, Sly and Arnie, are well past what the industry would consider their “use by” date, at least as far as action stars go, but the wry humor involved in the pair’s refusal to bend to cinematic convention and retire has seeped into every film they’ve made in the last few years. At least since Stallone’s triumphant return in Rambo. So how does Escape Plan stack up to their previous glory? Is it another Expendable cavalcade of one-liners and indestructible testosterone? Is it one of those embarrassing blips on the career of two of the big screen’s most popular, and iconic, figures? Do they escape Escape Plan with their dignity intact, and their rising career statuses unblemished?

Ray Breslin (Sylvester Stallone) works as a professional escape artist. Implanting himself into Federal prisons, he breaks out in an attempt to uncover weak spots inside the correctional facility system. Breslin and his team, led by accountant Lester Clark (Vincent D’Onofrio), associates Abigail Ross (Amy Ryan) and Hush (Curtis “50 Cent” Jackson), agree to his implantation into a secret CIA detainee facility, known as “the Tomb”, of which he will be given no information. With the payment on a successful escape a hell of a carrot, Breslin agrees to the job; he is kidnapped off the street and thrown into a vast, labyrinthine prison run by Warden Hobbes (Jim Caviezel), a man who tolerates no disobedience or disorder, and who plays with inmates lives as a whim. Inside the prison, Breslin (going by the name Portos) befriends Emil Rottmeyer (Arnold Schwarzenegger), who begins to aid him in his quest to escape. Realizing he has been betrayed by one of his own, Breslin plans to make his way to the surface (he guesses they are underground) and raise the alarm. But, upon a brief escape to the surface realizes the situation is a lot more complex than that. Both men are also assisted by a doctor, Kyrie (Sam Neill), who might just be the ally they need to escape the inescapable.

Prison movies have been made for nearly as long as there have been prisons, and movies. They range in sub-genre from “wrongly imprisoned”, such as Shawshank Redemption, to the “good criminal”, such as Stallone’s own Lock Up, and the crazed inmates with nothing to lose, such as… well, Con Air is probably a good example. Escape Plan fits neatly into the “Wrongly imprisoned” genre of prison film, with both Stallone (and to a lesser degree, Arnie) being innocent parties in the highly illegal usage of The Tomb. Both Stallone and Schwarzenegger have built their careers on masculine, testosterone-driven action (even in their comedies, they still have that manly man feel about it all) and Escape Plan offers little change in that respect. Considerable status of the two leads aside, the film never really feels like it’s a major release for either, perhaps due to its relatively subdued tone after The Expendables movies, or Arnie’s recent release, The Last Stand. Escape Plan is less about the bullets and guns (although it has them aplenty, late in the game) and more about the rapport between the two, the kind of thing we never thought we’d see when Arnie looked disdainfully at Sly’s visage in that weird Terminator 2 reference in Last Action Hero.

Truthfully, Sly and Arnie do have a nice screen chemistry, yet it never really rises above simplistic machismo into genuine affection; I know, I shouldn’t expect much from either men in terms of emotional range, but the film spends a great deal of time with the two of them chatting and planning without gaining much ground. Sure, there are laughs at the vague attempts at humor – the line from the trailer, about “hitting like a vegetarian”, is the best line in the film, in all honesty – but the focus remains on the silly, inconsequential subplots about the Warden’s real issue, in trying to obtain information from Rottmeyer about some criminal kingpin back in the world, and how Breslin and Rottmeyer subvert that in order to enable their escape. Stallone’s Breslin is hideously simplistic, with zero background other than he was once a family man (and is no longer, in a subplot that goes nowhere), while Arnie spends a great deal of time behaving like he’s Hugh Hefner at the Playboy Mansion, with his villainous beard and all. Escape Plan isn’t the kind of film where you really need characterization other than the broadest brushstrokes, but it might have helped to give at least some weight to their plight in the script.

The other major player here is Jim Caviezel, having a whale of a time as the scenery chewing, utterly bizarrely caricatured villain of the piece, Warden Hobbes.Caviezel is a far better actor than the material deserves, or warrants in this story, but he hams it up nicely, giving Hobbes just enough crazy-loopy edge to make him a true threat to our two heroes. Trouble is, he’s considerably hamstrung by woeful henchmen, although second-stringer Vinnie Jones makes a nice addition to the roster as Hobbes’ right-hand-thug, prison guard Drake. Aside from Jones, the rest of the guards are faceless avatars, designed to add number but not depth to the eventual battle sequences to come – and they come. The finale of the film, involving the total all-in involvement of the entire prison population and those supposedly supervising their incarceration, is bawdy and rowdy, just the way Stallone and Arnie fans like it. Also, catching Sam Neill in the cast on this was a welcome surprise, but one which is vastly underutilized, in my opinion.

The film’s sweaty, scrotum-tightening masculinity leeches into the very fabric of the production design too, with plenty of leathery, metallic and hard-edged visuals accompanying the brutal setting. Every second prisoner looks like they’ve spend three years in the gym, while the prison guards have an inexhaustible supply of energy when it comes to beating the shit out of their captives. Director Mikael Hafstrom, the man behind low-rent fare such as 1408 and The Rite (ugh), manages to give this film a fairly simple visual framework, as well as a rather distinguished sense of epic-ness that broadens the scope of the film as Breslin uncovers exactly where the Tomb has been constructed. The plot is, for a film like this, rather slow to unravel itself, winding through gradual reveals and the dialogue-driven “plotting” of the escape, until the final act unleashes the full fury of Stallone, Arnie, and their inmate cohorts as the Tomb blows wide open. Okay, there’s no posters of Raquel Welch on the wall anywhere, but the film has a similar echo of tricks behind the tricks and it delivers with comfort and unassuming ease. Escape Plan isn’t terribly clever, just clever enough not to be totally stupid.

Escape Plan is definitely a throwback to those good old actioners of the 80’s, from the synthetic score to the B-grade plot and casting, even if the whole thing is most definitely a modern production. Arnie and Sly have a ball delivering their hokey dialogue, the film cruises through its motions of supply and demand with regards to tension, while the second stringers all provide enough ballast to keep this thing from toppling over through sheer lunacy. It’s fun, frivolous silliness, and should be approached as such. It’s the kind of film you watch and forget; while I doubt this’ll be the one everyone talks about in a hundred years, it’s certainly a pleasant time-waster and does exactly what it says on the box.