Ever heard that old saying, that “Money is the root of all evil”? I disagree – love of money is the root of all evil, and The Wolf Of Wall Street epitomizes this like no other film I’ve seen yet. Martin Scorsese’s diatribe on the excesses of Wall Street trading, underlined by the rise, rise, and sharp fall of stockbroker Jordan Belfort, makes for captivating, at times abhorrent viewing, in one of the funniest films I’ve seen the director make. Scorsese is one of the living legends of Hollywood – as a director, he’s had no equal, and as someone who has probably forgotten more about movies than most of us will ever know, he’s easily the most knowledgeable person on the planet to understand the very fabric of making movies. His films always come with a pedigree unattainable by most standards, and his ability to create entire worlds and utterly compelling characters – both good and bad – makes him a genuine legend in his field. The Wolf Of Wall Street marries a director of violent, salacious adult-themed films (excepting Hugo, of course) and one of the most affluent Wall Street brokers in the 90’s, Jordan Belfort, and never has a more potent mix extracted some of the most brilliant work of both Scorsese and DiCaprio’s careers.

I like money. If you have a problem with that, f@ck you!

Plot synopsis courtesy Wikipedia:  In 1987, Jordan Belfort (Leonardo DiCaprio) becomes a stockbroker at an established Wall Street firm. His boss, Mark Hanna (Matthew McConaughey), advises him to adopt a lifestyle of sex and cocaine in order to succeed. He passes the Series 7 Exam and earns his broker’s license, only to lose his job when the firm fails after Black Monday. With nobody hiring stockbrokers, Belfort considers another career, but his wife Teresa Petrillo (Cristin Milioti) finds an advertisement for Investor Center, a Long Island boiler room which deals in penny stocks. His aggressive pitching style soon earns him a fortune. He befriends Donnie Azoff (Jonah Hill), a salesman who lives in the same apartment complex as Belfort, and they decide to open their own firm together, recruiting several of Belfort’s friends (all experienced marijuana dealers) and some co-workers from Investor Center to join them. The firm, Stratton Oakmont, soon becomes a billion-dollar company, and Belfort brings his parents, accountants “Mad” Max (Rob Reiner) and Leah Belfort (Christine Ebersole), to handle his finances. Belfort and his employees lead a lifestyle of total debauchery with lavish parties, sex and drugs , and he also begins cheating on his wife with several prostitutes, as well as becoming addicted to cocaine and Quaaludes. FBI agent Patrick Denham (Kyle Chandler) begins investigating Belfort and the company. At one of his parties, Belfort meets Naomi Lapaglia (Margot Robbie) and begins an affair with her. Belfort falls in love with and proposes to Lapaglia. They wed, and eventually have a daughter, Skyler. The FBI investigation continues, with the Securities and Exchange Commission joining in. Belfort opens a Swiss bank account with Jean-Jacques Saurel (Jean Dujardin) in the name of Naomi’s aunt Emma (Joanna Lumley). She and and her family regularly carry cash to Geneva for deposit, helping Belfort launder the proceeds of Stratton’s securities frauds. The scheme is nearly exposed by an incident where Azoff gets into a fight with Brad Bodnick (Jon Bernthal), a drug dealer and friend of Belfort’s who has been helping transfer money to Switzerland. As the FBI closes in, and Belfort refuses to give up control of Stratton Oakmont, all his carefully laid plans begin to unravel in a spiral of booze and drugs as Naomi threatens to leave him, taking Skyler, and the money can no longer buy him out of trouble. 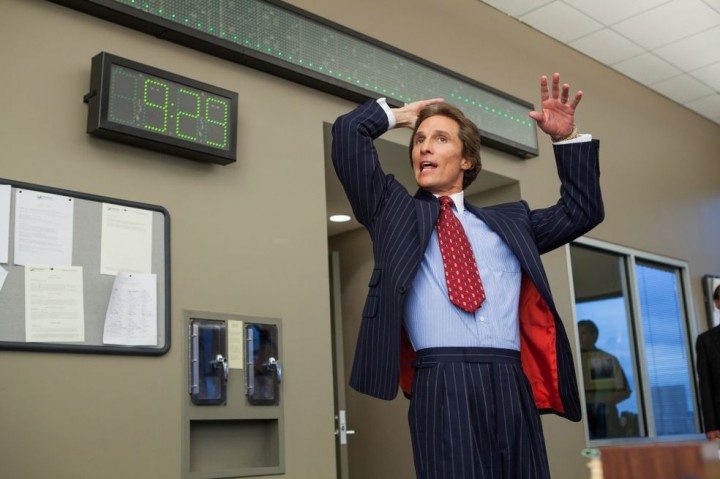 How Roger started his version of the Macarena…

The Wolf Of Wall Street is a film of little subtlety. Jordan Belfort is a real person (the film is based on his autobiography), and it’s fair to say that a lot of what occurs in this film is probably true – or at least embellished a little – but if even only half of it is true, this is still a story that will make your jaw hit the ground. I mean, one of DiCaprio’s first scenes has him snorting drugs out of a hooker’s ass. Not “off of”, out of. Er…. Okay, so you know where the level of taste in this film is, and it’s not high – what Wolf is, however, is damn funny entertainment. Although Scorsese could be called out for not making this film into an indictment on the loose-cannons of Wall Street, and heaven knows the stockbroking miasma that led to the economic collapse in 1988 (Black Monday happened to be Belfort’s first day on the job, would you believe it!) should be a cautionary tale told until the end of time, The Wolf Of Wall Street feels more like everyone involved was mainlining adrenaline throughout the production. Wolf Of Wall Street does not let up for a second. Scorsese eschews a more parochial approval of Belfort (and what the man represents) and goes for the jugular with a swirling mixture of sly classism, elitism and disregard for American values. 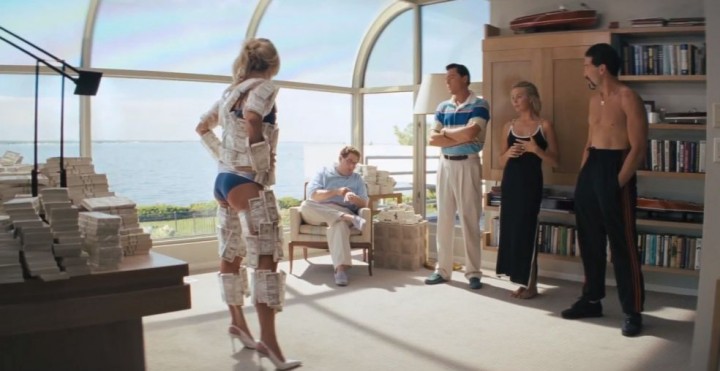 No, I’m not sticking money up by vajayjay.

It’s fair to say that Wolf Of Wall Street would be half the film it is without Leonardo DiCaprio leading the charge. In not the guy’s biggest fan, since I tend to find a lot of his performances are identical from film to film, but in Wolf, DiCaprio delivers a career best performance as Belfort, manic and crazed, drug-addled and utterly contemptible of all around him (even his friends, considering at one point he nearly kills his best friend and business partner, Azoff, played with sublime skill by Jonah Hill); Belfort is charisma and zealous greed personified, and DiCaprio has the wherewithal to give this odious, horrendous human being some sense of likability – as an audience, we should find this rebellious douche a complete wanker, but throughout the gang-busting momentum of the film one has the sneaky thoughts that you kinda hope he gets away with it. Testament to DiCaprio and Scorsese that they manage to do this without resorting to cheap tricks. 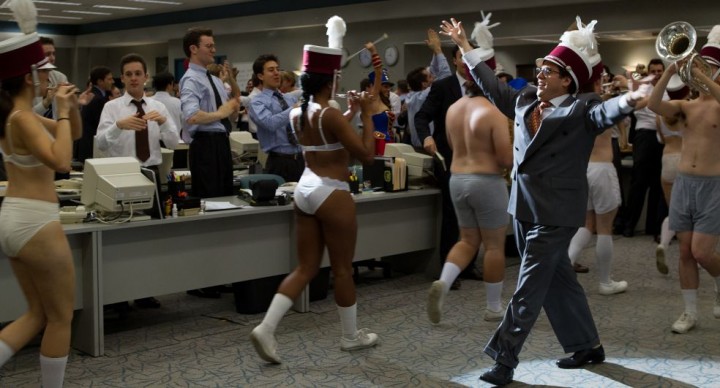 DiCaprio is aided by a terrific cast – I already mentioned Jonah Hill, who plays Azoff as the white-toothed, could-be-gay enabler to DiCaprio’s power-mad psycho. Hill is remarkable, offering a performance I haven’t seen from him before – at times, he’s tender and thoughtful, and at others, he’s a rocket of insanity (a lot like DiCaprio), but the pair of them have great chemistry and you really can tell they like each other. The third wheel in this triple-play is the luminous, ultra-sexy Margot Robbie, as Belfort’s second wife Naomi. Robbie (also seen in 2013’s About Time) is stunning, a blast of fresh air in this man-heavy film, and puts across a Jersey accent with faultless precision. She’s an Aussie actress made good, your Margot, and her leading role here is a breakout contender to put her into the big time. Here’s hoping! Smaller roles to Hollywood players like Rob Reiner, as Belfort’s father, Jon Bernthal (from The Walking Dead) as one of Belfort’s heavies, Matthew McConaughey as an early mentor for Belfort, and Kyle Chandler, as the FBI Agent in charge of pursuing the case against Belfort, bring a sense of ensemble to the film, although considering he’s in almost every scene, Wolf belongs to DiCaprio. The acting is faultless from even the minor players, and I’m gobsmacked that the film doesn’t just keel over with the talent on the screen.

Do NOT wreck by Jimmy Choo’s, okay hun?

And funny! God, I don’t think I’ve ever laughed so hard at a film that wasn’t an outright comedy in ages! Wolf has plenty of hilarity for audiences; a scene with Belfort trying to drive his Lamborghini home, desperate to stop Azoff from spilling his guts to the FBI, all while affected by large amounts of drugs in his system, is dynamite (and will hopefully become a “moment” the world uses when looking back on Scorsese’s career in years to come), as is the hubris of having Belfort’s private yacht modified so it can fit a personal helicopter to the roof (which, in a raging storm late in the film, actually detaches! LOL!!). A lot of humor is derived from Rob Reiner’s character, Belfort’s father, who upbraids his son for excessive spending and a lavish lifestyle, and who is nearly as bad with the English language as Belfort himself. Reiner steals every scene he’s in. The massive orgy-like work parties are also hilarious, with hookers, midgets and even a random head-shave thrown into the melting pot of salacious humor. Is the film a laugh riot? No, it’s not intended as such, but the interplay between Belfort’s drug-fueled binges and his personal life is so dynamic and random, there’s always something to laugh at. 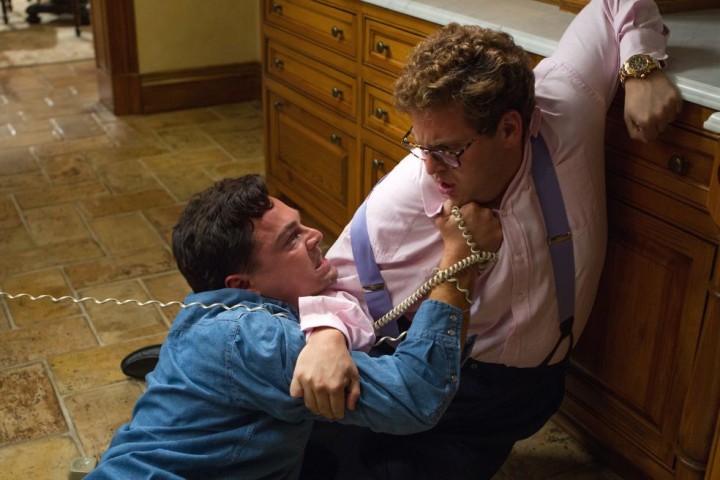 Connecting this call was a bitch!

If I had any criticism to the film, it would be simply that the whole thing is rat-a-tat-tat fast; there’s barely a pause for breath amongst the parties, drug snorting and nudity, and while I tend to go for this kind of film-making (thanks to a mild man-crush on Michael Bay) I do think it kept the characters somewhat at arms length from being accessible people. While one cannot condone what Belfort did, the film doesn’t really dig into what makes him do what he does – other than a lust for wealth and power, I guess – and any kind of emotional back-story is missing, making Belfort merely another arrogant prick who thinks he can get away with anything. He lacks any kind of empathy (which might be Scorsese’s point, now that I think about it) where he needs some; the whole film is filled with people who would otherwise sell their own mothers to make a buck, and even though there’s a tacit comedown for the gang towards the end (isn’t there always), it’s bittersweet and hardly a lament at the wrong perpetrated in the name of making money. Edited by Scorsese’s chopper of choice, Thelma Schoonmaker, Wolf Of Wall Street is a barrage of coarse language, vulgar behavior, adrenaline-fueled speechifying and some terrific laughs drawn from the absolute insanity of what transpires; Schoonmaker ensures that everything is crystal clear, makes sense, and accompanies the script’s humor with skill and class. 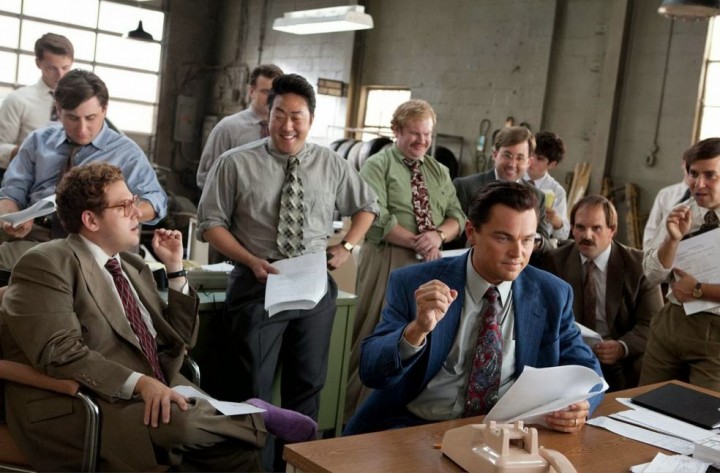 Okay you guys, you seriously have to be joking right now!

The Wolf of Wall Street isn’t a film you can watch easily. It has copious uses of “f@ck” (and all associated derivations), plenty of drug use, sex and nudity, violence and gratuitous insanity of the like we’ll probably never see again. It’s a master director at work here, his iconic tracking shots and trademark delivery of cinematic language honed to perfection, and his modern muse in DiCaprio delivers the role of a lifetime. This is sex-drugs-and-rock’n’roll writ large, a burst of utter ludicrous human failure in every regard, the kind of sour-burst lolly you used to suck on as child turned into a frantic, vicious film. It is to Wall Street what Any Given Sunday was to Pro Football. While the detractors might complain that there’s no definitive endorsement or condemnation of Belfort (or indeed the entire stockbroking industry, considering this film is analogous to that industry’s perceived public image), what we have here is an absolute blast from open to close.