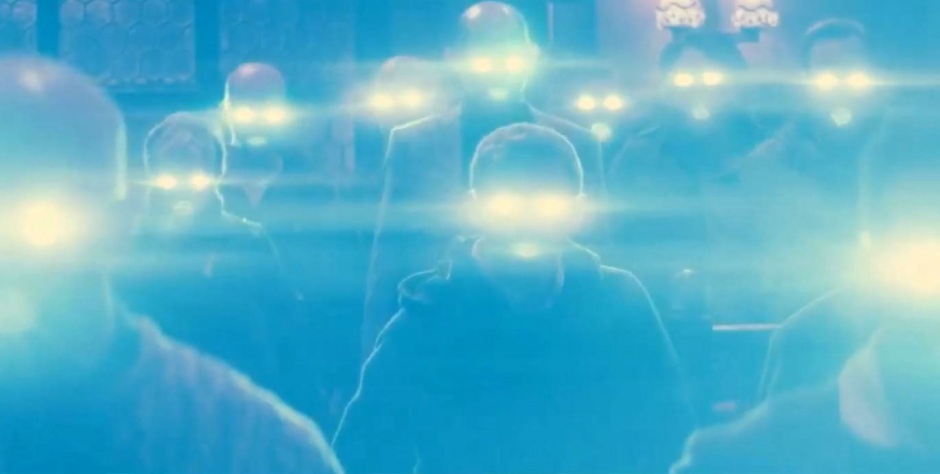 Director :  Edgar Wright
Year Of Release :   2013
Principal Cast :  Simon Pegg, Nick Frost, Paddy Considine, Martin Freeman, Eddie Marsan, Rosamund Pike, David Bradley, Pierce Brosnan, Thomas Law, Bill Nighy (Voice)
Approx Running Time :   109 Minutes
Synopsis: Five old school chums get back together after twenty years, to try and complete their childhood mission to drink a pint at twelve pubs in a single evening.
What we think :  Edgar Wright’s conclusion to his “Cornetto Trilogy”, The World’s End feels like wearing a film version of a nice, well-worn, comfy pair of soft, warm slippers. Much like Hot Fuzz before it, this film takes its time setting up the pins, before letting fly with a massive strike of action and gonzo comedy in the finale – the cast seem to be having a blast, and the “getting the band back together” flavoring Wright sprinkles throughout touches a nerve in this reviewer; in many ways, it proves the old saying, that you can never go home. The World’s End is an absolute corker.

The Ultimate Pub Crawl. With aliens.

After the release of Edgar Wright’s Hot Fuzz, the zany action/comedy featuring Simon Pegg and Nick Frost, fans expected another team up of this cinematic wunderkind trio sooner rather than later. Expectations were left wanting, however, when Wright went off to make the comic-book-film Scott Pilgrim, while Pegg and Frost teamed up with director Greg Mottola for the alien-comedy, Paul. It would be six long years before Wright and his leading lads would team up again, this time for The World’s End, the concluding chapter in what has become loosely known as the Three Flavors Cornetto Trilogy; Shaun Of The Dead and Hot Fuzz being the previous installments. The World’s End was set to be some kind of genre-slapping comedy masterpiece, if you asked fans of Wright and Co; would it revolutionize an entire genre like Shaun Of The Dead, or would it go from 0 to 100 in five minutes like Hot Fuzz? Or would it….  not? Considering it’s a slightly different beast than either of those other films, that’s a tough question to answer, but the cliff-notes version is that The World’s End should satisfy fans of Wright, and will entertain even the casual viewers who stumble upon this expecting some kind of apocalyptic Armageddon-clone.

Synopsis courtesy Wikipedia: Gary King (Simon Pegg), a middle-aged alcoholic, resolves to track down his estranged friends and complete the “Golden Mile”, a pub crawl encompassing 12 pubs in their hometown of Newton Haven. The group attempted the crawl as teenagers over 20 years earlier, but failed to reach the final pub, The World’s End. Gary persuades Peter Page (Eddie Marsan), Oliver “O-Man” Chamberlain (Martin Freeman), Steven Prince (Paddy Considine), and Andy Knightley (Nick Frost) to join him in Newton Haven. After arriving in Newton Haven, the group are briefly joined for a drink by Oliver’s sister Sam (Rosamund Pike), over whose affections Gary and Steven were one-time rivals. In the toilets of the fourth pub, Gary gets into a fight with a surprisingly strong and agile teenager. Gary accidentally knocks the teen’s head off, exposing him as a robot. Gary’s friends join him and fight more robots, after which Andy abandons his teetotal ways and drinks an order of shots. The group decide to continue the pub crawl to avoid suspicion; as they do, however, it becomes increasingly obvious that Newton Haven in currently in the midst of an alien invasion, and our boys must do their level best not to be killed or captured, and to drink their way to the end of the Golden Mile.

Where to begin? You’d have to go a long way to find anybody who hasn’t at least seen one of Edgar Wright’s previous two Cornetto films, Shaun of The Dead and Hot Fuzz. Whether you enjoyed them or not, there’s no denying a certain skill and rapacious wit goes into each one of his movies, and I’m pleased to say The World’s End is yet another example of the man’s brilliance. The team of Wright and Simon Pegg deliver a script that’s obviously set up for Pegg’s unique humor and status as a rising star (general audiences will know him as Scotty from the JJ Abrams Star Trek franchise), and you can sense the film’s “family” ethic from script to screen. There’s a lot of friends here, working behind the camera and in front, and The World’s End gives us not only some terrific comedy beats, but (like Hot Fuzz before it) some gangbuster action moments – not to mention several genuinely moving moments of dramatic gravitas that overreach anything Pegg and his buddies have done before – it just feels so effortless on their behalf, you want them to continue to do so forever.

What always makes me laugh about an Edgar Wright film is that they generally start going in one direction, until a complete left-field plot twist takes the film into uncharted territory faster than you can say “aliens are invading”. Hot Fuzz’s balls-out finale, a massive shoot-out through a small British town, was a terrific example – until then, the film had the flavorings of some kind of sly (slightly gory)  mystery, before exploding into action with a frantic final twenty minutes. The World’s End doesn’t spend quite as long setting things up before it all goes bananas, but let’s just say this film puts Hot Fuzz’s over-the-top finale in the shade. Gary and his friends only get four pubs into their crawl, before they uncover the presence of robots (aliens, actually, but who’s counting), and the film’s zany antics ratchet up even further than before. The thing driving the action, however, is not the fact that the town appears to be taken over by robots, but rather the characters we’ve come to know and love. Gary, Pete, Ollie and Steve are all solid, well-written characters with faults and foibles that make them utterly relatable – Nick Frost’s Andy, who is given a “mysterious past” with Gary, provides much of the more crucial moments of angst and drama, although once he downs those shots in pub 4, all bets are off.

The World’s End makes the most of its small-town, big-concept premise. Wright is canny enough to know that he can trigger fear in people by the simplest of methods: make something familiar creepy, and it’ll creep people out even more than normal. Setting an alien invasion in a small town like Newton Haven, where the illusion of normalcy provides security for the main characters, brings us into this falsehood until Wright’s ready to unleash his special-effects-driven trick-bag. And when it is unleashed, you’re sitting there thinking how awesome it all is. It’s the “it could happen anywhere” thing that freaks people out, and The World’s End certainly delivers that.

It also delivers its fair share of laughs. Simon Pegg absolutely steals this from all comers as Gary King, the loudmouth, garish, obnoxious and self-centered drunkard who never made it past the age of about sixteen. His performance ranges from moderately outlandish into complete drunken mess by the end credits, as he bullies his friends into doing what he wants, and drinking his way through the movie. There’s something about King, though, that screams at us for sympathy – we do sympathize with King’s inability to move on from his school days, while his friends have all gone on to get jobs and have families. That sense of being left behind, of not living up to the dream, is something we can all understand. Pegg’s backed up by a wonderful cast, all of who approach this material gamely. Paddy Considine is solid (and quite funny) as Steve, Eddie Marsan makes the role of the unfortunate Peter Page one to remember, Martin Freeman’s stiff-upper-lip Oliver is serviceable, while Nick Frost goes hard to steal the spotlight from Pegg (he doesn’t succeed) as Andy, the teetotaler who fell out with Gary years prior, and who seems to hold a grudge. Rosamund Pike provides some welcome female fun throughout as Sam, and her tete-a-tete’s with Pegg and Considine make for hilarious viewing.

Folks are likely to be asking where The World’s End ranks in the Edgar Wright filmography, as far as quality goes. I still say Hot Fuzz beats it for sheer hutzpah, but it’s definitely on par with Shaun Of The Dead (time will tell, I guess) and only slightly less fun than Scott Pilgrim’s cartoonish antics. Honestly, though, we’re only talking about miniscule factors of enjoyment here; none of Wright’s films to-date have been dogs, and The World’s End isn’t going to be the one to break the chain. It’s furiously edited, funny and energetic; the manic energy from Pegg and the gangbuster final two thirds (it’s weird, but the alien bombshell happens quite early in the film, making the latter hour or so a full-bore action extravaganza!) provide The World’s End with a delightfully adult momentum that traverses this film from open to close. The World’s End comes highly recommended.