Director :  Ruairi Robinson
Year Of Release :   2013
Principal Cast :  Liev Schreiber, Romola Garai, Elias Koteas, Olivia Williams, Johnny Harris, Goran Kostic, Tom Cullen, Yusma Warsama.
Approx Running Time :  91 Minutes
Synopsis:   A research crew of eight inhabiting the Tantalus Base outpost on Mars are just over 19 hours from the completion of a six month mission and a rendezvous with the lander Aurora, which is due to return them to their main orbiting craft. From there they face another six months in space before arriving at Earth. However, when one of the team makes an amazing discovery, things suddenly take a horrible turn for the worst.
What we think : Well mounted sci-fi thriller turns into a stock-standard survival chiller, complete with oxygen deprivation via an airlock, one of the cast trying to sacrifice themselves bravely, and the inevitable question-mark finale that leaves the ending open for both interpretation and a sequel. The cast are solid, the film looks great, but the story is a shoulder-shrug to genre aficionados and will engender few memorable thoughts.

We keep going there, it keeps killing us.

Humanity’s long-held fascination with the stars and exploring galactic bodies beyond the gravity of Earth has been fodder for science fiction since man invented papyrus, figured out the Earth was round (mostly) and that we orbited the sun, instead of it orbiting us. In the 60’s, humanity finally achieved the seemingly impossible – we traveled to, and landed on, the moon. Since then, literature, film and all manner of creative media have been focused on exploring the rest of not only our immediate solar system, but the entire galaxy. Stanley Kubrick’s 2001: A Space Odyssey made space exploration a cinematic reality, while fantasy franchises like Star Trek, Star Wars, Flash Gordon and a host of others all gave rise to the popularity of the burgeoning “science fiction” genre, of which modern cinematic techniques lent themselves to rather well. If you could imagine it, Hollywood could show it, albeit in fictionalized form. Mars, the closest planet to Earth, was ripe as a storytelling landscape, due to its proximity and the real-world possibility that humans might one day actually go there in our lifetimes. In recent years, though, science fiction portrayals of Mars exploration have lapsed into the “horror/thriller” genre by seeming default; Brian De Palma’s cinematic abortion Mission To Mars, the Val Kilmer starrer Red Planet, John Carpenter’s ill-advised Ghosts Of Mars, and even The Rock’s video-game-movie Doom, all made going to Mars a mission fraught with potential (and inevitable) catastrophe. Not to mention the ultimate Mars flick, Total Recall; Mars is an inhospitable, completely alien landscape, allowing creative minds to generate all manner of horrors, terrors and dark-shadowy evil to manifest within the recesses of our minds. The Last Days On Mars, the latest exploratory mission to the red planet, comes with all this expectation (read: baggage), so how does it hold up compared to other films of its genre?

I don’t know what it is, but that suit makes you sure look sexy!

A team of astronauts are completing a 6 month expeditionary mission to collect samples from the surface of Mars. Their replacement team is due to arrive in a little over 19 hours, and the team is recalled to their base pod by mission captain Brunel (Elias Koteas) for a last briefing before they are returned to Earth. One of the crew, Marko (Goran Kostic) requests special permission to return to one of his sensors with the intention of repairing it at the last minute. Along with astronaut Harrington (Tom Cullen), Marko uses one of the mission’s rover vehicles to return to his site, where, just as he is about to proclaim a major discovery, a section of the ground collapses beneath him, sending him out of sight into the icy underbelly of Mars. Back at base, a belligerent crew-member, Kim (Olivia Williams) decides to fidn out for herself why Marko was being so secretive, and uncovers the truth – Marko has discovered a living bacteria beneath the surface (the first ever discovery of alien life). When Brunel and mission medic Dalby (Yusma Warsama) return to Marko’s site to recover the body, things take a further turn when they cannot locate a body. Mission technical specialist Vincent Campbell (Liev Schreiber) and fellow crew-member Irwin (Johnny Harris), as well as Campbell’s friend Rebecca Lane (Romola Garai) discover that not only is Marko no longer in the collapsed pit, but he’s still running about the surface of Mars. And he isn’t alive. 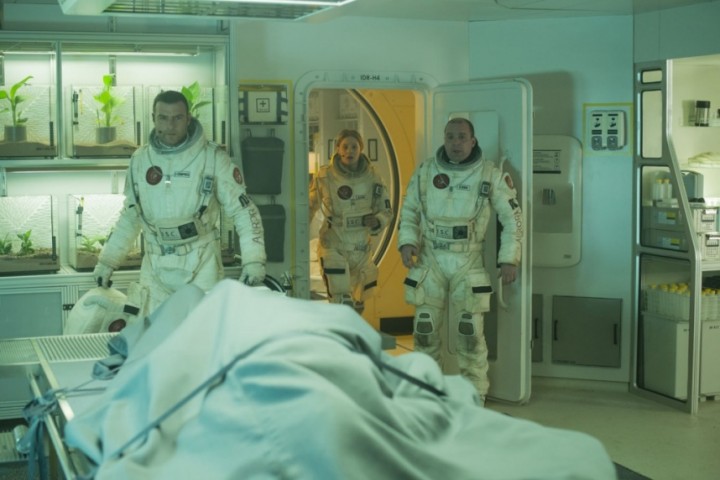 How did the remains of Michael Bay’s career get way out here?

I hate to spoil this film, but it’s hard to give it a solid review without mentioning its one enormous caveat. The Last Days On Mars might as well have been titled Zombies On Mars, because that’s what the film becomes about twenty minutes in. I really felt the film kneecapped itself by becoming yet another zombie flick, rather than a more creative, less obvious sci-fi outing. The “bacteria” the astronauts discover infects them, and they morph into Fast Zombies, which is kinda even more terrifying than normal considering they don’t need oxygen to breathe, making them quite formidable in the oxygen-free climate of Mars. On the one hand, I was disappointed the film didn’t strive for something else, anything else really, because as a zombie movie it’s rather predictable and poorly constructed. As a science fiction film, the production values and aesthetic provide for a vastly more interesting story than the one we end up with, which is a shame, because it’s annoying to see a film with this solid style go out the window thanks to a corny, half-cocked zombie plot. 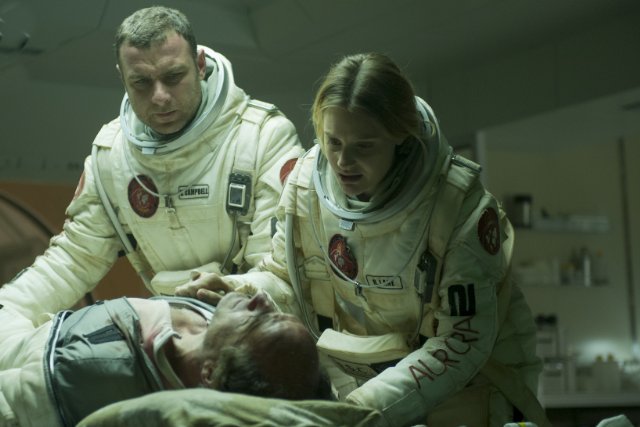 Are you telling me that with all this technology, we haven’t invented an anti-zombie serum yet?

Once the bacteria is discovered, and the final fate of Marko known, the film rapidly spirals into a discordant screeching of shadows, Martian dust and monologing about the futility of life and blah blah. The set-up, the opening fifteen or so minutes, feels a lot like Ridley Scott’s Alien (a brave comparison, I know) in that it depicts the crew and their mission in all its human failings – the crew are at the end of the mission, emotionally frayed and more often, biting at each other with barely contained frustration. The mission base, a construct of corridors and living quarters with the sterility of a hospital, is their home, but it feels more like a prison. The cast feel roughed up, as they probably should considering their locale and their proximity to death with any wrong move. This foundation for the film is as good as any film is likely to get, including the eclectic cast delivering characters that feel like they really exist, that really have history behind them. Yet, for all its exceptional work in drawing us into this world, the subsequent story twists severely undermine the goodwill one has towards the project as a whole.

Weird how much the surface of Mars looks like a Middle Eastern country….

Frankly, the zombie element is just badly handled. I mean, it’s see-it-coming-from-space stuff (pun intended), and it ruins an otherwise well made movie. Once Marko becomes a zombie, and infects poor Dalby as well, the film becomes a survivalist thriller, hitting all the Zombie Movie cliches dead-on and descending into that melancholy, “who will survive” horror style that usually ends with one, or none, of the cast surviving the onslaught. Liev Schreiber leads the cast with his usual taciturn style, his character being given some kind of claustrophobic flashback arc that lacks coherence or clarity, yet is supposed to make him a more flawed character. Indeed, the entire cast have their Genre Flaws – the one who freaks out, the one who closes the door on a fellow human, consigning them to death, the one who screams and shouts a lot, the angry one, the commanding officer who hesitates a lot; all the cliches are here, its just they’re hidden by some terrific performances (Olivia Williams, take a bow) for the most part, until the scrambling, scraping finale. 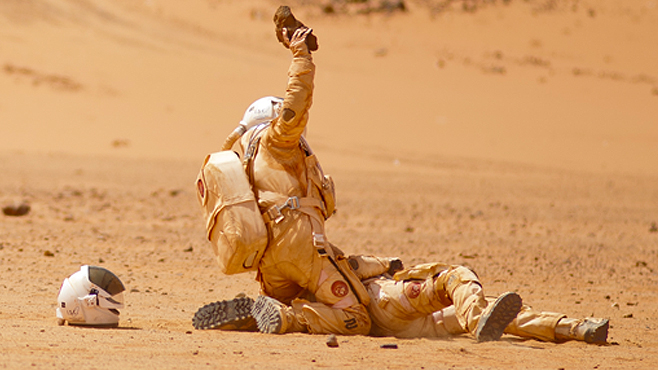 Adam Sandler is NOT going to appear in this film, right?

While the story spirals into Monster Movie Of The Week stuff, kudos to the film-makers for making the film at least look and feel unique; apparently, a lot of the film was shot in Jordan, with the vast desert vistas of that country standing in for the Mars surface. It works well, the barren landscape and Monument Valley-esque buttes protruding into the sky adding an element of frontier-ism to the film which, in my opinion, is highly evocative. A lot of post-production dust and Martian sand has been added to the exterior visuals, which has the double-edged sword of making the film feel claustrophobic in nature outside on the one hand, and hard to see what the hell is happening on the other. Quite regularly, people moving through the external atmosphere of Mars were hidden or camouflaged by the large quantities of Martian dust, providing an extra sense of what might be lurking out of sight, waiting to jump out and bite you. The Last Days On Mars is certainly a visual treat, if nothing else. 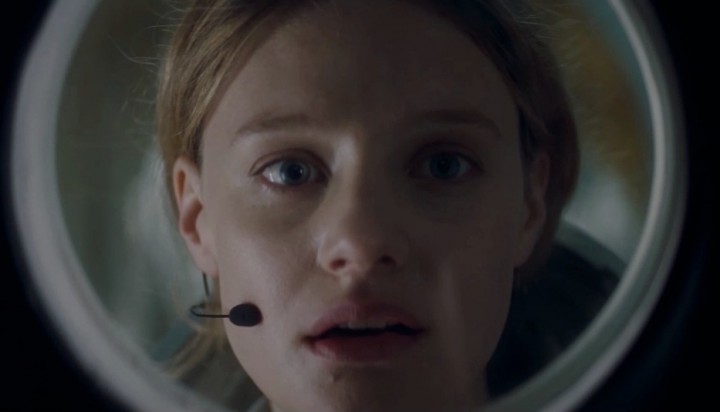 Oh no. There’s no escape. Not even for the viewer.

The Last Days On Mars has a lot going for it. The fact that it fails to make the most of both its excellent production values, and highly competent cast, and deliver a rote and generic zombie movie set in outer space, is the most disappointing aspect of the entire thing. Although it has some nice underpinning concepts, and tries hard to give us more intelligent, real-world scares and details, the film falls hard in its basic premise, unable to recover from what is, essentially, a stylishly derivative zombie apocalypse flick.