Director :  Jeff Wadlow
Year Of Release :   2013
Principal Cast :  Aaron Taylor- Johnson, Chloe Grace Moretz, Christopher Mintz-Plasse, Jim Carrey, Clark Duke, Olga Kurkulina, Lindy Booth, John Leguizamo, Morris Chestnut, Garret M Brown, Claudia Lee, Yancy Butler, Lynda Fonesca, Iain Glen, Benedict Wong, Donald Faison,
Approx Running Time :   100 Minutes
Synopsis: After giving up their vigilante ways, Mindy and Dave (aka Hitgirl and Kick-Ass) are called back into action by the acts of an unknown vigilante calling himself The Motherf*cker.
What we think :   The battle scars are showing on the Kick-Ass franchise, as this rip-smart sequel wears thing quite quickly, lacking either the snappy wit or the stylish execution of the original. The cast do their best gamely, but Jeff Wadlow’s direction lacks the class of Matthew Vaughn’s visual acumen, and the end result feels more like an homage than a true sequel.

The old Hollywood laws of sequels would have us believe that any sequel worth its salt needs to be bigger, larger, faster and louder. Kick-Ass 2, based on Mark Millar’s hugely successful comic book series, sees the return of almost all of the popular characters from the original film (sans, obviously, the deceased Big Daddy, as essayed by Nic Cage), and throws not a few, but an entire legion of new characters into the mix, as director Jeff Wadlow goes for broke trying to emulate original-film helmer Matthew Vaughn’s success. As a violent, bloody follow-up to the original, Kick-Ass 2 doesn’t quite have the same in-your-face gore and bone-crunching thrills, and with the departure of Mark Strong’s central villain from the first, lacks a legitimately threatening antagonist for the narrative – it’s left up to Chris Mintz-Plasse’s Chris D’Amico, known throughout the film as The Motherf*cker,  to carry that burden, and he’s hardly threatening any more than I might be. So how exactly does Kick-Ass 2 hold up as its own film, let alone as a sequel to one of the best comic-book-movie productions of the last decade? 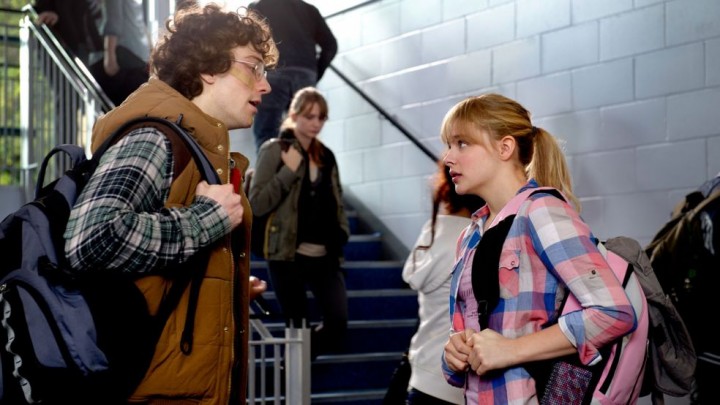 This ain’t what I had in mind when I stopped being a pervert.

Settling down to life a relatively calm life in high school, Dave Lizewski (Aaron Taylor-Johnson) is fast becoming bored, so he joins up with Mindy Macready (Chloe Grace Moretz) to train with her in order to become a proper superhero. Meanwhile, former costumed villain Red Mist, Chris D’Amico (Christpher Mintz-Plasse) is being kept cooped up at home by his mother (Yancy Butler), and her manservant Javier (John Leguizamo), driving him crazy. After accidentally killing his mother, D’Amico Jr, still seeking revenge on Kick-Ass for the death of his father, decides to use his family fortune to become a super-villain, named The Motherf*cker. He invites a variety of heavy mercenaries to join his group, intent on wreaking havoc throughout New York City. At the behest of her guardian, Detective Williams (Morris Chestnut), Mindy is forced to give up her Hitgirl persona, and return to High School, where she is “befriended” by a trio of uppity brats (who conspire to embarrass her). Dave, as Kick-Ass, joins a local vigilante superhero group, run by Colonel Stars and Stripes (Jim Carrey) and known as Justice Forever. Inevitably, as Justice Forever and The Motherf*cker’s paths begin to cross, the showdown between Chris D’Amico and Dave Lizewski becomes a foregone conclusion. And will Hitgirl make a return to the superhero fold, or is Mindy Macready lost to the lure of teen high-school angst? 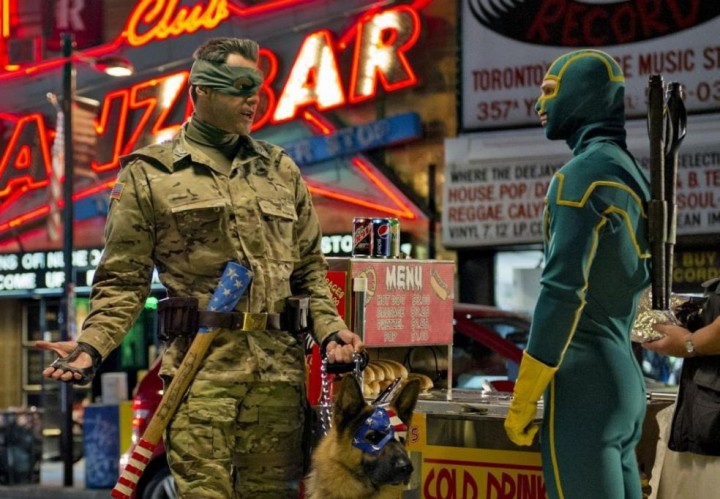 You think you have problems? I have a chin larger than John Travolta!!

Considering its launching pad, it’s something of a shame that Kick-Ass 2 turns out the way it does. Perhaps surprisingly, Matthew Vaughn decided not the direct the sequel, making way for Jeff Wadlow, whose major claim to fame until now was as the director of fight film Never Back Down. Wadlow brings a pretty decent grab-bag of tricks to Kick-Ass 2, although it must be said that he never really even approaches what Vaughn was able to do from the outset. A lot of this has to do with the impossibly bulky cast roster, which sees not one, but two teams of costumed folk preparing to duke it out, leaving core characters like Dave, Chris and Mindy to somehow flounder their way to the surface for air, amongst the teeming throngs of extraneous characters. The film has Millar’s trademark ironic humor, and Wadlow makes a good fist of bringing the violent, bloody consequences of vigilantism to life, but there’s simply too much going on for it all to register amidst the gaudy (and often sexy) costumes. 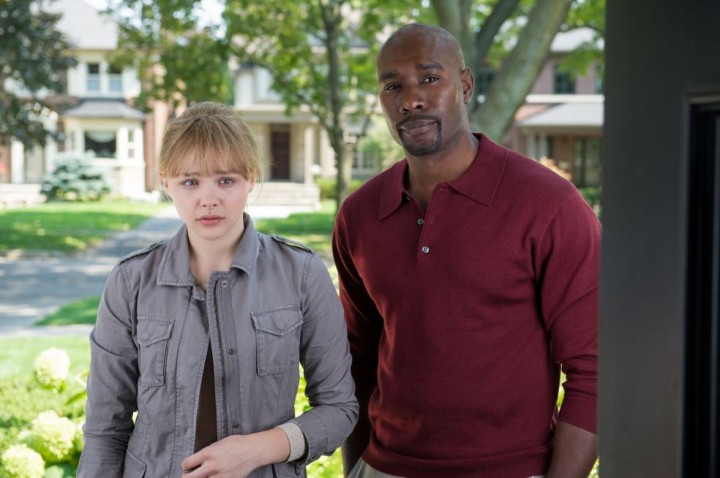 The cast do their best, there’s no doubt. Aaron Taylor-Johnson never really inhabits the role like he did previously, feeling a lot more like a blank canvas wandering through the set than an actual character, while poor Chris Mintz-Plasse is forced to perform some utterly inane dialogue and dress in one of cinemas worst costume design disasters (by design, perhaps?) as The Motherf*cker. Chloe Grace Moretz has a story arc that doesn’t quite jibe with her (now) maturing character – she’s forced into some teen angst narrative about conforming to society’s values or something, before eventually saying “f*ck that, I’m Hitgirl!” and getting back to doing what she does best. The new addition to the franchise, Jim Carrey’s wonderful turn as Colonel Stars and Stripes, isn’t given anywhere near enough to do – he’s this film’s Big Daddy element, although neither the script nor Wadlow make the most of Carrey’s fabulous turn as the Mob Enforcer turned Good Guy. 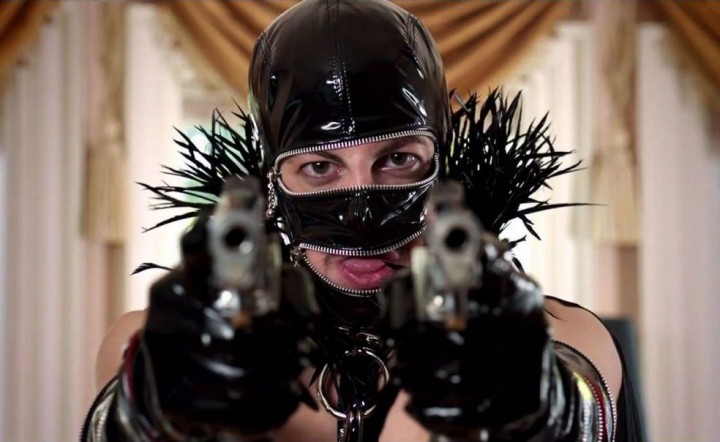 Second string players like Lindy Booth (as Night Bitch), and John Leguizamo (as Javier) are amusing and good to watch, and many of The Motherf*cker’s henchmen are laugh-out-loud badass (especially the brutal Mother Russia), but the film lacks focus on central characters by trying to scoop up story points to the secondary ones, and the result is a meandering, occasionally pert yet almost entirely wasted sense of creative kitchen-sink-isms. There’s so many ideas packed into this film, so much subtext (most of which is hammered home with abbreviated subtlety) and a large amount of “find your true self” motivational claptrap, it suffocates any single, identifiable trajectory the film tries to impart.

All of a sudden, Jerry needed to wee. Very, very badly.

The film is packed with wry in-jokes, references and subtle (and not-so-subtle) humor. Barbs at the very comic-book medium are rampant throughout the film, especially when The Motherf*cker is on one of his rants, where it’s constantly stated that “this isn’t a comic book, people die” – juxtapose that with the use of comic-styled scene interstitials, and it’s actually relatively funny. The dialogue rattles along with the hipster-styled repartee of people who never utter “um” and “er” in their life, although the use of Dave Lizewski’s timidity and bafflingly endearing reluctance to actually be Kick-Ass does allow for some moments of apparent emotional weakness – it’s moments like this that make Kick-Ass 2 more approachable. Allusions to great superhero team-ups, like the Justice Society Of America, are funny, and Dave’s father, played by Garrett Brown, feels like a rip-off of Spider-Man’s Uncle Ben; there’s plenty of comic-riffs here, and if you can spot them you’ll have a great time. 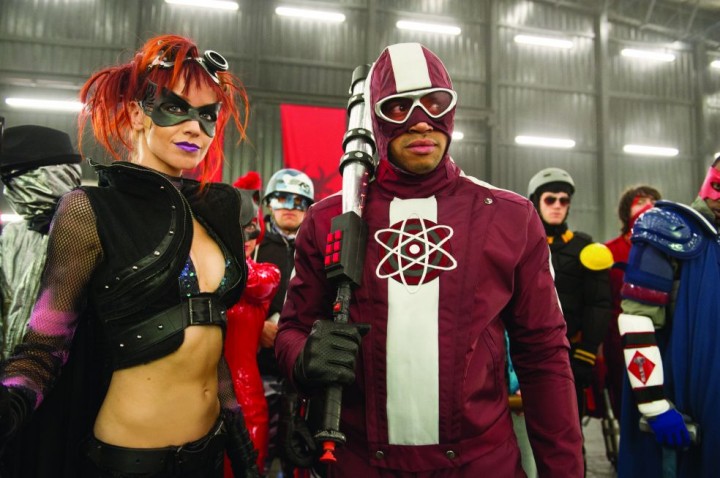 Boobs and bats. What’s not to love!

Kick-Ass 2’s main issue is the fact that it never really has a convincing villain. In the previous film, Chris D’Amico’s Red Mist was something of a wannabe villain, and frankly a bit of a laughing stock, while Chris’s father was the real deal – the only time Kick-Ass 2 comes close to a really menacing antagonist is a short scene involving Chris’s incarcerated uncle, played by Iain Glenn (Game Of Thrones), who delivers more menace and evil in three screen minutes than Mintz-Plasse is able to conjure in the entire movie. To bastardize a famous line: The Motherf*cker isn’t the classic screen villain this film wanted, but I guess it’s one we got regardless. Mintz-Plasse does his best, but the character is a comedy relief creation, and having him lead the villain wolfpack hamstrings the film in generating tension. It’s a shame the real menace in the film comes from second-stringer Mother Russia, who would put Dolph Lundgren’s Rocky appearance to shame. On a personal note, I was annoyed to see Lyndsy Fonesca’s Katie written out of the film in a single scene; her chemistry with Dave was a key driver to the original films’ success, and Dave’s eventual dalliance with Night Bitch just didn’t have the same chord-strike to it. 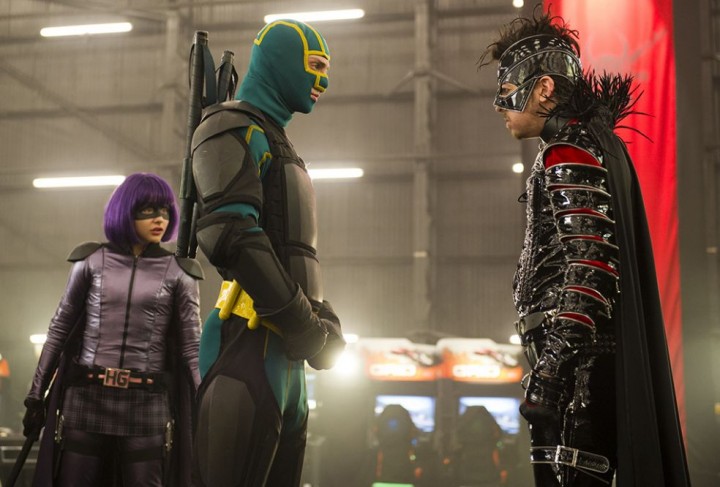 The face off to end all face offs….

While it’s great to see these characters up on the screen again (and to hear that terrific theme melody once more), there’s a sense that something is missing from the Kick-Ass universe. Perhaps it’s the fact that they tried to go bigger and louder, leaving the core conceit struggling for air amongst the thrashing subplots within, or the fact that the film feels more like it’s paying homage to the original instead of trying to carve a path on its own, but whatever the case, this worthwhile, yet largely going-through-the-motions sequel, never really takes flight like it should. It’s worth a watch for Moretz’ portrayal of Hitgirl, and Mintz-Plasse’s spittle-chewing turn as The Motherf*cker, but non-fans will be better served leaving this one alone.