Movie Review – Kings Of Summer, The

Director :  Jordan Vogt-Roberts
Year Of Release :    2013
Principal Cast :  Nick Robinson, Gabriel Basso, Nick Offerman, Alison Brie, Megan Mullally, Marc Evan Jackson, Moises Arias, Erin Moriarty, Eugene Cordero, Mary Lynn Rajskub, Kimail Ninjiani.
Approx Running Time :   94 Minutes
Synopsis:   Three young boys run away from home, build a “house” in the woods, and live there in rebellion at their overbearing parents. Naturally, hijinks ensue.
What we think :  Just a lovely, lovely film, Kings Of Summer brings you right back to your childhood; a cobbling of familiarity and humor, mixed with a sweet-natured commentary on modern, disenfranchised youth, makes this film a true delight to watch. From the opening minute I was smiling to myself, nodding acquiescence at just how much I could associate with the central characters. There’s something for everyone here.

Stand By Me In The Woods, Bro.

Oh man, how I wish I could be young again. Watching a film like Kings Of Summer, a film hinging on audience’s familiarity with adolescence and the trials of puberty, family and friends, I’m reminded of other seminal Coming Of Age films; Stand By Me, for example, is one such film, or even The Goonies. The Kings Of Summer fills itself with whimsy, feels like a summer shower on your face, and delights in scents of golden hued times past and the giddy reflections of ghosts long dormant. The shared adventure, the striking out of teen rebellion as a substitute for personal growth – this film largely derives much of its sense of fun from our formative years, and while I dispute some assertions that the film lacks some edginess or sharp-tipped focus, there’s a warm glow of shared acceptance in this movie that is hard to ignore. It’s a film about life, love and the pe0ple who make us who we are; The Kings Of Summer is a movie about friendship. 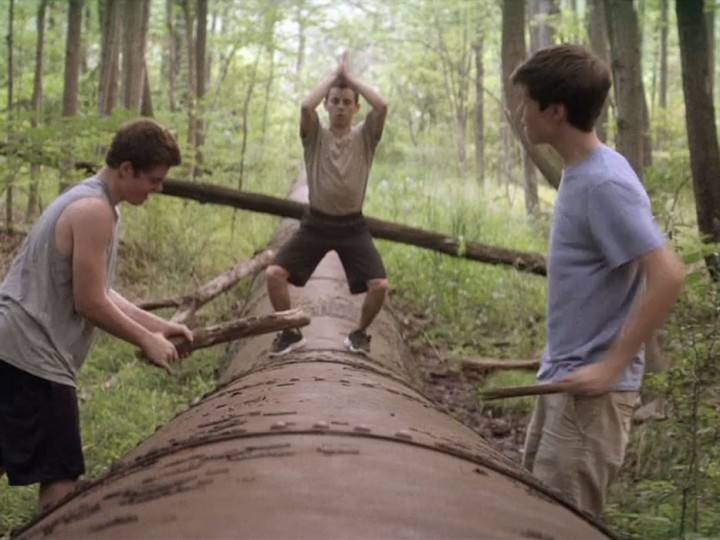 Joe (Nick Robinson) and Patrick (Gabriel Basso) are best friends; Joe lives with his widowed father Frank (Nick Offerman), who has grown increasingly distant from his son even while trying to micro-manage his life, while Joe’s sister heather (Alison Brie) lives away from home with her boyfriend. Patrick’s parents (Megan Mullally and Marc Evan Jackson) seem to treat him as a young child, and Patrick has grown resentful of his life with them. Joe and Patrick run away to a grove in the nearby woods, where they construct a ramshackle house of sort with a weird kid who tags along, Biaggio (Moises Arias). There, they live off the land (really, Joe ducks down to the chicken shop for their meals) and play at living “in the wild”. Joe’s infatuation with a local girl, Kelly (Erin Moriarty)  leads to friction between he and Patrick, as Kelly and her friends arrive at the hidden house, whereby Kelly and Patrick form a relationship. Joe believes this to be a betrayal of his and Patrick’s friendship, forcing Joe to push Patrick away. Meanwhile, both Joe and Patrick’s parents are desperately searching for their missing boys, with police involvement leading them no closer to locating the runaway teens. 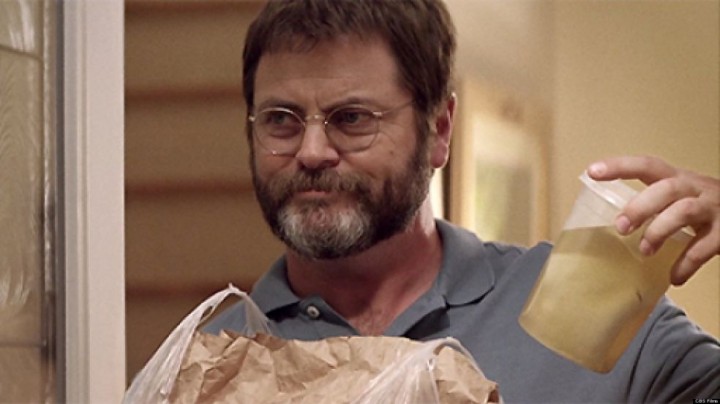 I doubt there’s an adult alive today who didn’t, at some point in their early teens, seriously consider packing a bag and running away from home. If you didn’t, you are one of the unfortunate ones; the concept of running away from home remains one of the formative points in a child’s life, when the desire to break free of parental control and become “a man” (or, a woman, not to be sexist) on their own terms overrides common sense or the ability to generate a significant income which which to live on. This urge, usually brought on by some kind of “unfairness” in living standards (home before midnight, no closed doors when girls come over, etc etc) is a strong one, more often brushed aside by the cooling of the angst-ridden ardor of hatred, although occasionally the moment comes when some of us – you, perhaps – have actually committed to the deed and walked out the door. The Kings Of Summer is something of a “fantasy film” in this regard, because the central premise is one of freedom and breaking of control; Joe and Patrick are representative of anyone who’s ever thought about it or done it. 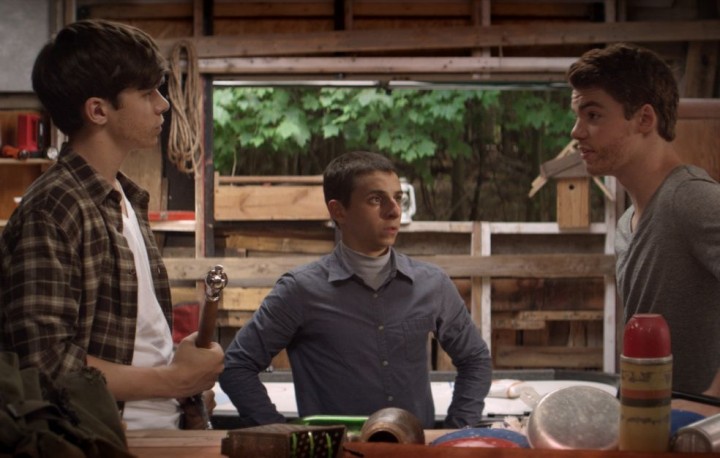 You want to…. invite a girl?

The Kings Of Summer lives in its characters; the central duo of Joe and Patrick are fairly generic Modern Youth archetypes, driven by hormones and a desire to resent their parents (no matter the flaw), and the growth the pair have throughout the movie is – by and large – limited to adolescent meanderings we’re all painfully familiar with. Nick Robinson is excellent  as Joe, giving the character a “misunderstood” quality which mixes well with his internal strength to stay the course even when the ship threatens to capsize. Gabriel Basso, as Patrick (a name which, for some reason, now always reminds me of SpongeBob Squarepants) is equally good in his “comfortable slippers” role; Patrick’s the loyal best friend who inadvertently becomes romantically involved with a girl Joe has a crush on. Basso’s not given a lot to do emotionally, rather this angst and gnashing of teeth is given to Joe as “the spurned one”, yet Basso’s able to carve a sympathetic streak in a role with limited range and motivation. Nick Offerman is solid support as Joe’s dad, the kind of father you’d hate to have, but love to have, if you get my meaning. He’s still despairing being single, taking his frustration out on his family – and in particular, Joe – and when Joe goes missing Frank goes through the various stages of grief, until acceptance and resolution occurs late in the piece. Offerman’s the surprise package here, and offers viewers probably the most emotionally resonant character in the entire film (considering he’s largely a second-string character!), and his screen chemistry is wonderful. He’s an actor I’d like to see more of. 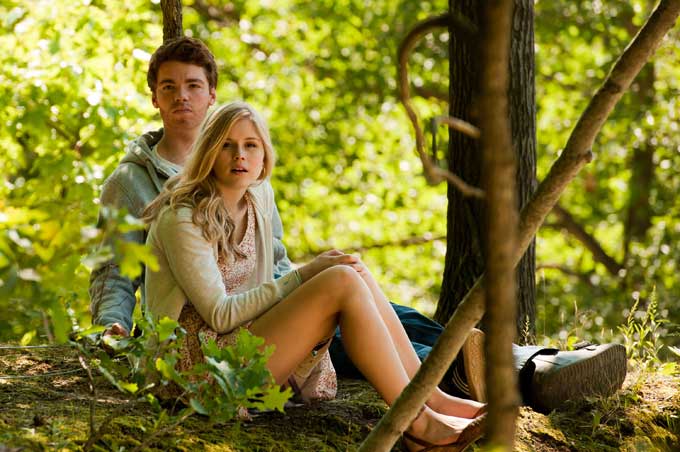 The girl who came between them!

The film’s comedic element revolves around the quirky, unique individual known as Biaggio, a small-statured kid with a penchant for random comments, weird behavior, and a decidedly warped sense of humor. It’s weird to see Joe and Patrick even associating with Biaggio, yet they do (perhaps “tolerate” is a better word), and the film works even in spite of this crazy friendship. Moises Arias plays him with eerie, creepy ferocity, giving the character a warmth even when there’s ice to be found with the character’s detached, almost semi-primitive activities. Erin Moriarty is lilting and whimsical as Kelly, The Girl who comes between the two best friends (Bro’s before Ho’s, man!, c’mon!!) and although has little impact on the film’s emotional depth, provides support and a semi-bohemian attitude with her portrayal of the character. 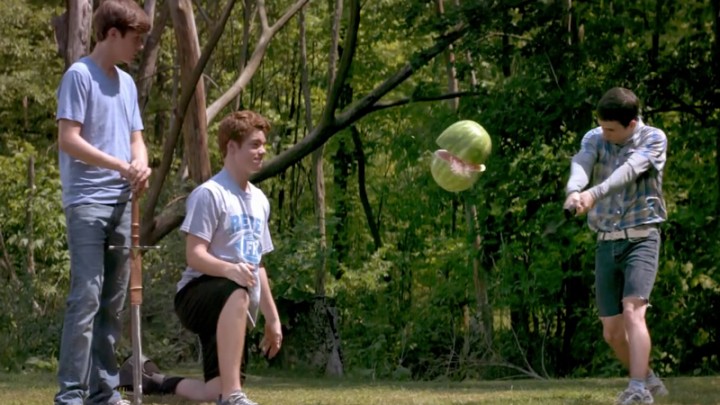 If there’s a single word I can use to describe the feeling of watching The Kings Of Summer, its “relaxed”. This film feels effortless, the kind of kinetic ambivalence of watching a silk sheet collapse onto a freshly made bed. It’s so leisurely, so content within itself, you can’t help but feel good just watching it. Sure, there’s elements of drama that raise the tension a fraction, more often counterpointed successfully by the wry humor injected by the script, but by and large you’ll be hard-pressed to really frown or feel depressed while watching this movie. Perhaps it’s the setting, given the film’s predominantly woodland setting, the occasional sprinkling of Terrence Malick’s nature photography echoing through the translucent settings our character find themselves in. The film’s scattering of youth and innocence lost (or being lost) could have worked against the story: after all, who wants to relive painful childhood experiences like losing your first love? Yet, director Jordan Vogt-Roberts infuses so much love and care into this film it’s impossible not to fall for its charms. From the warm and inviting cinematography (kudos to DP Ross Reige for his work here) to the delightful soundtrack and Ryan Miller’s largely effective score, the film’s look says as much about it as the story it tells; this is a beautifully made film.

Dad, I don’t think you’re supposed to leave all your bills this late….

If you’ve ever loved, had your heart broken, wanted to unshackle the teenage years of pimples and school recess, or even if you’ve actually ever run away from home before, The Kings Of Summer is a film that will resonate with you – hell, it’ll resonate with everyone. There’s a piece of you and I in this movie, a simple, elegant work of art that might not strain intellect or slake a thirst for explosions, and I cannot recommend it higher than that. It’s personal, uplifting, joyous and oh so familiar. It’s about growing, about loving, and being loved. The yearning for something you can’t quite put your finger on – that “something” which comes with burgeoning adulthood. This is a terrific, gorgeous film in every respect.