In the early 2000’s, WWE star Dwayne “The Rock” Johnson was making a name for himself outside the wrestling ring in feature films – his small role in The Mummy Returns, where he played the villainous Scorpion King, was followed by reprising the role for the lead part in 2002’s The Scorpion King, before he starred alongside American Pie’s Stifler, Seann William Scott, in The Rundown. In what was effectively only his second full feature film role, Johnson (still only known as The Rock back then) showed that he had a genuine screen presence, and in many ways heralded the changing of the guard in Action Cinema of the time; a small cameo by Arnold Schwarzenegger in the opening sequence was something of a “handover” of the baton, as it were. Johnson certainly fit the mold of an action star – he was huge, imposing, filled the screen and could deliver a line with precision and wry humor; in many ways, he was an Arnie or a Stallone for the new millennium, only this time, with the ability to speak English. And, it seemed, audiences were able to accept him as a leading action star as well; in saying that, The Rundown was a commercial failure (grossing barely it’s $81m budget back) but was generally received well by critics, in one of those rare instances where the result of an action film is inversely slanted. In looking at The Rundown now (in some territories, it’s known as Welcome To The Jungle), Dwayne Johnson’s talent to magnify his hulking screen presence and genuine likeability in leading roles is never more raw and fresh than it is here. While the Scorpion King might have put him on the map, The Rundown (and a series of action films to follow – Walking Tall, Doom, and Gridiron Gang among them) laid the foundation for a successful film career for the former WWE champ. 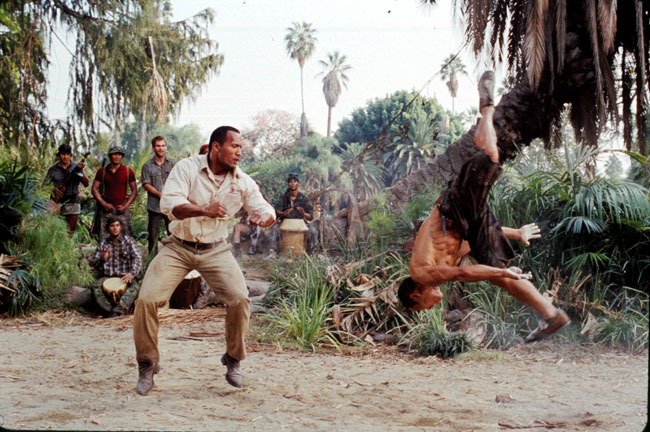 Beck (Johnson) is a “retrieval expert” sent by his employer, Walker (William Lucking) on “one last job” to track down the crime boss’s erstwhile son Travis (Seann William Scott) in the deep Amazon jungle. Travis, who hangs out in a small mining town of El Dorado where he attempts to hook up with local barmaid Mariana (Rosario Dawson), is trying to find a lost ancient artifact, El Gato, which he hopes will prove to his family that he’s a success. Meanwhile, El Dorado is run by the Machiavellian Hatcher (Christopher Walken), who uses the local population as indentured slave labor to mine for gold, thereby making himself very very wealthy. After double-crossing Beck to keep Travis in the town – Hatcher doesn’t want the locals to use the money for El Gato to free themselves of his control – Hatcher then pursues Beck and a reluctant Travis into the jungle, where they are attacked by both monkeys and local rebels, before eventually locating the hiding place of El Gato. But before Beck can return Travis to LA, he must overcome the plans of Hatcher, and that’s going to involve doing something he doesn’t like doing – using guns.

Don’t confuse my concern with stupidity….

It’s a bit of a shame The Rundown wasn’t as commercially successful as it could have been, because while revisiting this film after so many years, it occurred to me that it might have made a great action franchise. The Rock’s charismatic presence, coupled with Seann William Scott’s effusive (and then-fresh) sense of comedy, makes The Rundown a very easy watch. Although the film ends with little thought for a sequel, it’d be easy enough to have Johnson and Scott return to these roles as a kind-of buddy-comedy action franchise that might have worked better than some of the Rock’s “comedies” did a few years later. Peter Berg’s stylish, slick direction, mixed with some nicely worked action set-pieces and the inclusion of Rosario Dawson’s sexy-as bartender babe, make The Rundown a lot like those cool 90’s action films that eschewed sense and sensibility for outright comedy action beats. Plus, what other film do you ever see where The Rock’s head is used as a sex toy by a randy monkey?

The film makes excellent use of its Hawaiian location (the film’s story is set in the Amazon, but Hawaii was used as the principle filming location for security and cost factors) and the mind-boggling casting involved. Johnson and Scott aside, The Rundown sees Christopher Walken doing his best Brando-in-Apocalypse Now-crazy routine, complete with his usual tics and mannerisms, to terrific effect, while Trainspotting star Ewen Bremner (who has since fallen off the planet, it must be said) is hilarious as the near-incomprehensible Scottish pilot used by Beck to arrive in Brazil’s deep jungle. Rosario Dawson provides some female attraction in amongst the grit and grime of the Amazon, while Ernie Reymes Jr’s tiny rebel fighter dude is also something to behold. None of the cast are tested with this B-zone script (thanks to RJ Stewart and James Vanderbilt) but that’s not the point of the movie. The point of the movie is to put all these disparate characters together and watch the sparks fly. 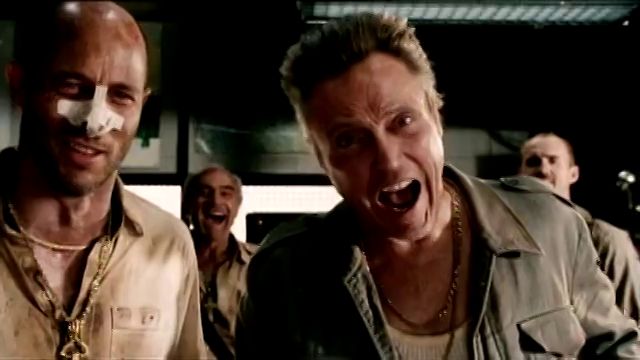 Battleship and Hancock helmer Peter Berg’s direction is apropos for the genre – it’s flashy, razor-cut edited and glossy like a postcard, ensuring the film at least looks amazing even at its low points. Not that there are many low points, because the film jumps and leaps about the flashy narrative with barely a pause for breath. Snappy camerawork and frantic editing (key moments towards the end of the film, in which Beck “sees” the enemy weapons and makes his attack calculations, are particularly cool even now), coupled with some great music by Harry Gregson-Williams and Ewen Bremner’s semi-recital of Dylan Thoma’s “Do Not Go Gentle Into That Good Night”, make for compelling action cinema. There’s laughs, there’s genuine tension, and the “cool” factor is amped up to about 11 on the Spinal Tap Scale of Loud.

The Rundown is crowd pleasing entertainment at its most elegantly simple. The plot is contrived to suit the characters and location, the characters are broad-scope 2 dimensional, and the film hangs on the pleasing chemistry between its two central leads. The Rock, in only his second major leading role, is excellent (and damn, he hasn’t aged a day, it seems) while Seann William Scott’s schtick isn’t as breathlessly annoying as it became in the American Pie franchise, leaving the film swinging between the comedy and the action with equal success. It’s fun without being frivolous, it’s silly without being stupid, and it’s easily one of the most underrated action flicks from the early 2000’s. Definitely worth a look.