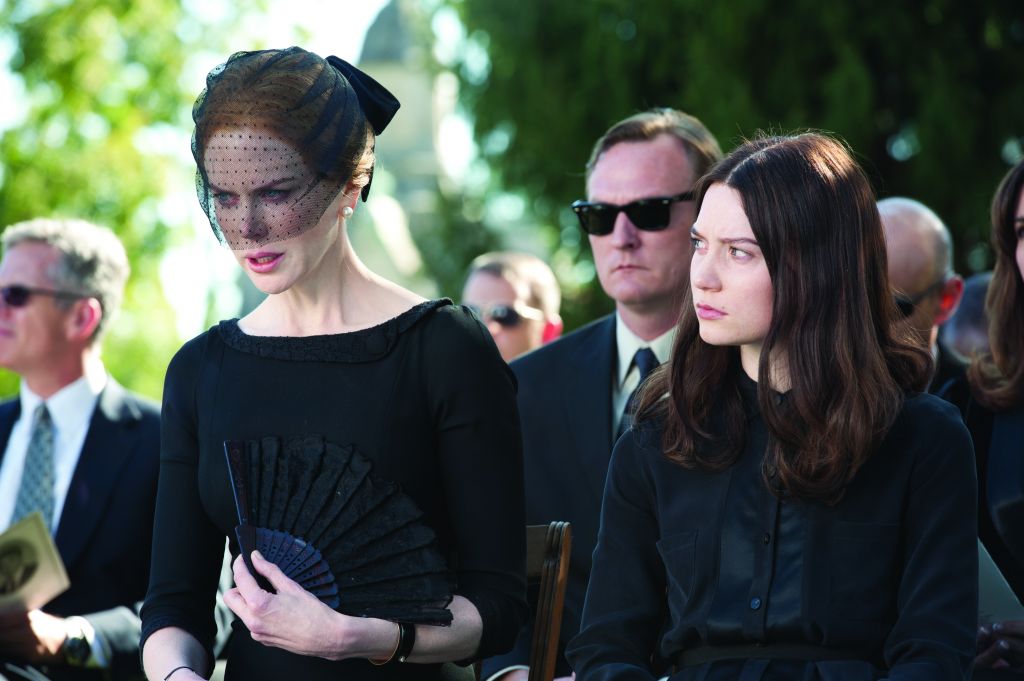 Director :  Park Chan-wook
Year Of Release :  2013
Principal Cast :   Mia Wasikowska, Matthew Goode, Nicole Kidman, Jacki Weaver, Dermot Mulroney, Lucas Till, Alden Ehrenreich, Phyllis Sommerville, Ralph Brown, Judith Godreche.
Approx Running Time :   99 Minutes
Synopsis:  A reclusive young woman, mourning the death of her father, becomes infatuated with her newly arrived uncle. However, he harbors a dark secret that will have both mother and daughter fearing for their very lives.
What we think :   If a film can be summed up in a single word (trust me, that doesn’t happen too often) then Stoker’s descriptor would be “methodical”. Edited, acted and paced to within an inch of its life, Stoker is a resplendent film of vibrant emotional, dramatic and thrilling consequence; while it may be too slow for some, those of you willing to imbibe in a gradual sip of a film (instead of the normal Hollywood guzzle) will be most pleased with what you discover here.

Anybody who Google’s Stoker’s review status will come across words such as “refined”, “restrained”, “glorious” and “beautiful”; not a single word of this would be erroneous, for Stoker is all of those and more. It is a lovely film to watch, even if the subject matter and behavior of those involved is perhaps less than socially acceptable. Led by three glorious performances, none the least Mia Wasikowska’s, Stoker seems effortless in its execution and wondrous in visual acumen. While a film about murder, rape and insanity aren’t perhaps the most easy-to-approach subjects for a film-maker, Stoker – scripted by Prison Break star Wentworth Miller, no less – has an exciting, layered and filled-t0-the-brim-with-sly-nods sense of style and (perhaps more astonishingly) purpose to everything that transpires. Not a pixel is out of place, not a hair or limb in the wrong position, not a feature of the frame is in any way deleterious to the overall aesthetic of Park Chan-wook’s first English language film. It’s a film which is so obviously constructed, yet feels almost birthed into being by a film-maker so attuned to his camera, so articulate with a lens, or lighting, or subtle visual effects; Stoker is a film that will divide casual viewers, but excite those who know what they’re in for.

India Stoker (Mia Wasikowska) lives with her mother, Evelyn (Nicole Kidman) in their manor home in an undefined location in the USA. As the film opens, they are mourning the recent bereavement of their father, Richard (Dermot Mulroney). India’s relationship with Evelyn is strained to say the least, with her mother jealous of the time Richard spent with India before he died in a car accident. At the funeral, India is surprised to find her father had a brother, Charlie (Matthew Goode), who has been traveling the world as a photojournalist. While the Stoker’s housekeeper, Mrs McGarrick (Phyllis Sommerville) wants Charlie to leave immediately, and Charlie’s Aunt Gin (Jackie Weaver) also infuses the situation with tension, India and Evelyn both find the interloper somewhat attractive – Evelyn is obviously seduced by Charlie’s charms, while India find herself attracted in less obvious ways. However, upon discovering that Charlie is in fact a killer, India finds within herself a level of arousal that is both frightening and attractive.

If Alfred Hitchcock was alive today, I like to think Stoker is the kind of film he’d be making with the technology available. As it stands, Park Chan-wook’s inscrutable eye for detail has come into full focus in Stoker, his first English language film – if you’ve never seen Oldboy, a part of the Vengeance Trilogy, then can I urge you to do so post haste! – and one which is both beautiful and horrific in equal amounts. Stoker’s languid pacing, deliberate shot selection and immaculate visuals will turn a lot of casual viewers off, especially ones thinking this is a more gory or frightening film than the poster might indicate. Stoker is not a slasher film, nor is it an outright gore-horror film; Stoker is a psychological horror film, and if it’s an intellectual tickling you need from a film, then this one might be right up your alley. Yes, there’s some disturbing material within Stoker’s complex narrative, yet it’s handled in much the same way Michael Bay handles explosions: correctly.

Blood and gore for the sake of it soon give rise to viewer apathy. Stoker, while containing only minimal blood and elements of horror, is still visceral in most respects largely because the blood is almost withheld as a narrative device, rather than front and center. The narrative is character-driven, precluding the overuse of flotsam gore to deliver a story first, shocks second. Stoker is shocking, even though the mystery wrapped up in Wentworth Miller’s dark screenplay isn’t as clever as it seems to think it is, but Chan-wook gives the film enough style and the characters enough room to breathe to overcome plot deficiencies or a lack of dialogue. Large parts of Stoker are free of exposition, meaning Chan-wook has to rely on his actors to convey emotion, feeling and character beats; the three primaries in Stoker are more than up to the challenge.

Mia Wasikowska (it’s impossible to say, let alone type!) stars as India, and her performance is strikingly good. I’d go as far as to say she’s as eerie as Sissy Spacek’s Carrie, or even Haley Joel Osment in The Sixth Sense. India’s reclusive, almost Asperger-like introverted nature is perfectly captured by Wasikowska, who aches frustration and sexual release with startling clarity. She’s ably backed up by Nicole Kidman, doing the same kind of role she brought to the latter half of Eyes Wide Shut, and Kidman’s able to bring a tragic, unfettered sympathy to the disillusioned widow. Matthew Goode sparkles as Charlie, the unhinged, raving-loony family member who may or may not be a psychotic killer. There’s a deep-seated sense of unbridled rage about him, hinted at through moments of brutal violence scattered throughout the early parts of the film. Goode gives off the uneasy vibe that makes you question his every move, his every motive – until the final reveal of his true nature brings it all home. And… just when you think Stoker has finished delivering its surprises, along comes another – the finale scene, which seems included merely to provoke coffee table conversation than anything constructive within the film, but it does have that “final knife-twist” most modern horror films enjoy delivering to unsuspecting audiences.

Stoker is nothing if not a beautifully constructed film. It’s a joy to watch, with the glorious attention to detail in the framing, the focus, the lighting and the elegant editing, all combining to provoke reactions from all discerning viewers who watch it. If I was to analogize this film, it’s the cinematic equivalent of listening classical music (does that make Chan-wook a modern von Karajan?); Stoker is a thinking persons horror film, eliciting more cerebral shocks than physical ones, and remains one of the most stylish, most accomplished entries into the genre in the last twenty years. While I understand many might find it frustratingly slow, or perhaps not to their tastes, for this reviewer it hit all the right notes and crescendoed with just the right precision to make me quiver. Stoker is brilliant in nearly every regard, and for those elements in which it’s not brilliant, it’s still good enough to be considered excellent.