Director :  Steven Soderbergh
Year Of Release :   2012
Principal Cast :   Channing Tatum, Matthew McConaughey, Alex Pettyfer, Cody Horn, Matt Bomer, Olivia Munn, Joe Manganiello, Adam Rodriguez, Kevin Nash, Gabriel Iglesias.
Approx Running Time :   110 Minutes
Synopsis:  Channing Tatum in a film about male strippers. Go. Watch.
What we think :   Energetic, well made film about male strippers does more than just titillate – it actually entertains on a more cerebral level. While I’m hardly ever likely to watch Magic Mike many times in my life, I can recommend this to anybody of a discerning nature (yes, there’s plenty of male nudity in this one, but it’s contextual….. like Showgirls…) because it’s actually a pretty good film. Magic Mike might not be quite as magical as the title might indicate, but as a story and film go, you’ll find a lot worse on the shelf at the local rental. Decent, solid entertainment.

Seeing more of Matthew McConaughey than I ever wanted to….

Magic Mike must have been a brave pitch to pull off. A film about male strippers set in Tampa, Florida, starring former stripper himself Channing Tatum, is hardly likely to get blokes in the door. Sure, it’ll pull a decent female crowd, but to remain fair to all, the lure of seeing a bunch of buffed hardbodies strutting about with abs larger than my head needs to be more than simple eroticism. No doubt there’ll be the punters out there who refuse to see this film point-blank, and fair enough, considering the film has it’s fair share of flesh on display, but take a moment to consider that Steven Soderbergh, the man who gave us Erin Brockovich and Ocean’s 11 (and, I guess, Ocean’s 12 and 13) put his name and reputation on the line in helming this puppy, and that might make you realize that Magic Mike is more than just a simple flesh-fest. Strange as it might seem, there’s brains behind the brawn; admittedly, the story is fairly thin by my estimation, and the character aside from Tatum’s aren’t that well developed, but the effort to pull off a male revue film and give it some heart is still worth a look. I flippantly referred to the 90’s shocker Showgirls in the opener above, and although these two films are world apart in terms of narrative complexity and subtlety (if there is such a thing in the stripper world) they are more alike than Soderbergh and Tatum (who produced) might ever admit. 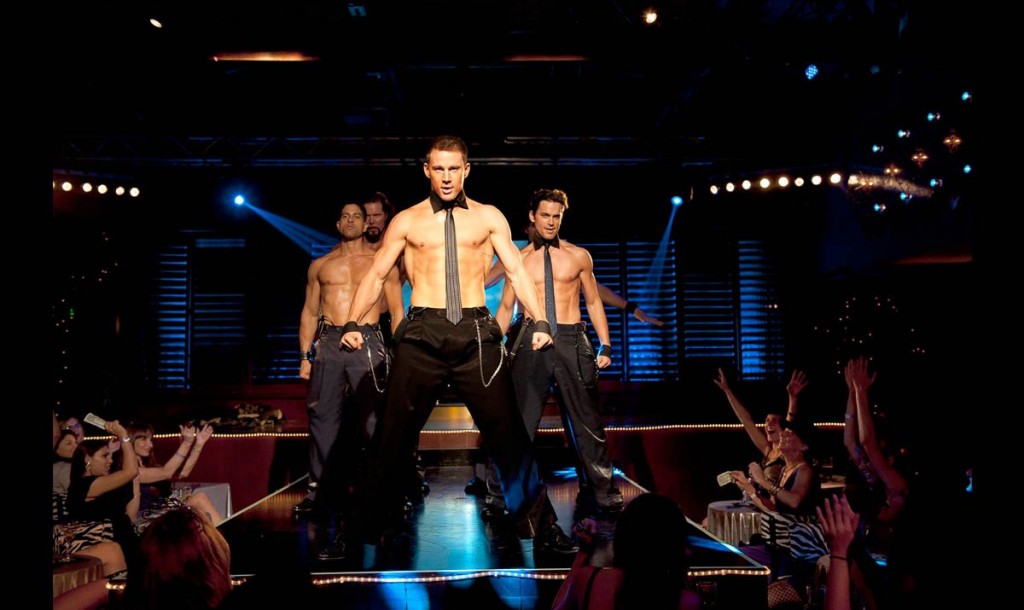 Watch, I can left one nipple independently of the other….

Mike (Channing Tatum) works part time as a laborer, and also as a stripper at the Tampa, Florida Xquisite Strip Club, run by businessman Dallas (Matthew McConaughey), who is trying to expand his empire into Miami. Mike meets a young, out-of-work Adam (Alex Pettyfer), and leads him into the seductive world of stripping for cash, a job Adam (known around the club as The Kid) takes to with enormous enthusiasm. Adam’s sister, Brooke (Cody Horn), who has had to take on a motherly role over her brother, is at first upset at Adam’s choice of career, however is reassured by Mike that he’ll look after the younger kid for her. As Mike and Brooke become closer, Adam begins to be seduced by the seedy dark side of the industry, indulging in drugs and having sex with the clients, something frowned upon by Mike and Dallas. Soon, Mike must make the choice between a relationship with Brooke, and staying in the stripping industry – he can’t have both, although both offer tempting options of a future success. 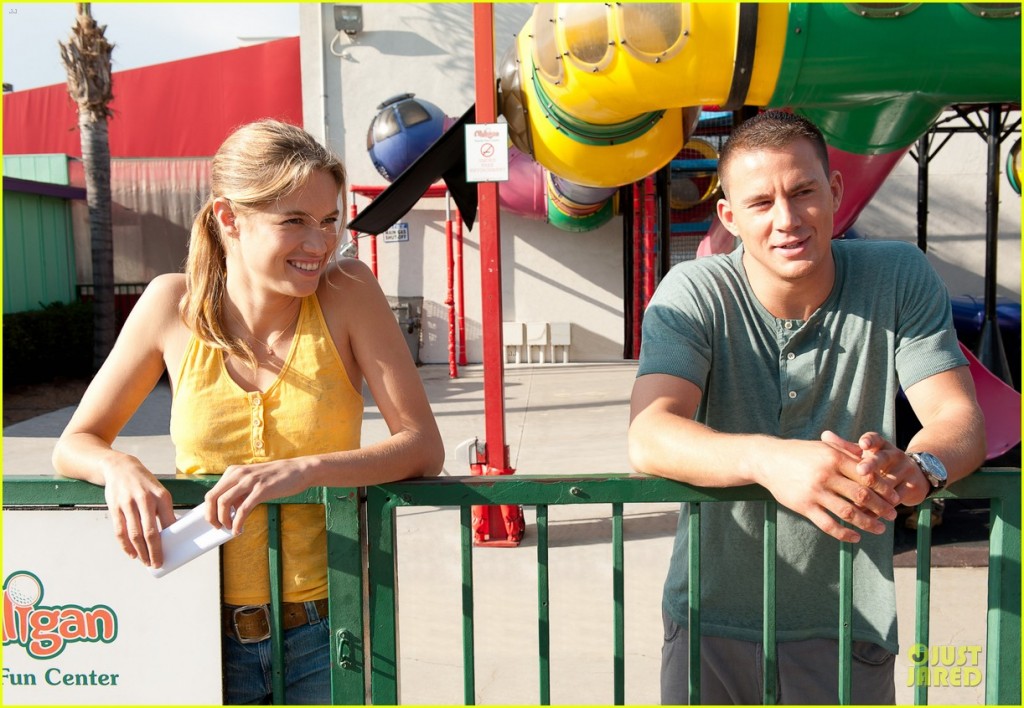 Oh I don’t know, wanna go back to my place and have wild monkey sex?

Marketed as some sort of razzle-dazzle male-eye-candy orgy, you’d be forgiven for thinking Magic Mike would appeal largely to women and gay men. In broad terms, you’d be right. What the film does do, however, is make itself accessible to all audience members – straight and gay, men and women – thanks to the use of a reasonably decent script and characters we come to know and love (although not always). Rather than journey down the sordid, flesh-fest generics of a typically trashy exploitation flick, Magic Mike does the unexpected and gives us a reason to care for what happens on the screen. Primarily through its characters, none of whom are really well developed in the way you’d hope, Magic Mike examines the life of a male stripper, the sordid world of sexualized entertainment, and the state of employment and financial burdens in America today. There’s more to this than mere flesh, yes, but it helps if you’re not fussed about it anyway. 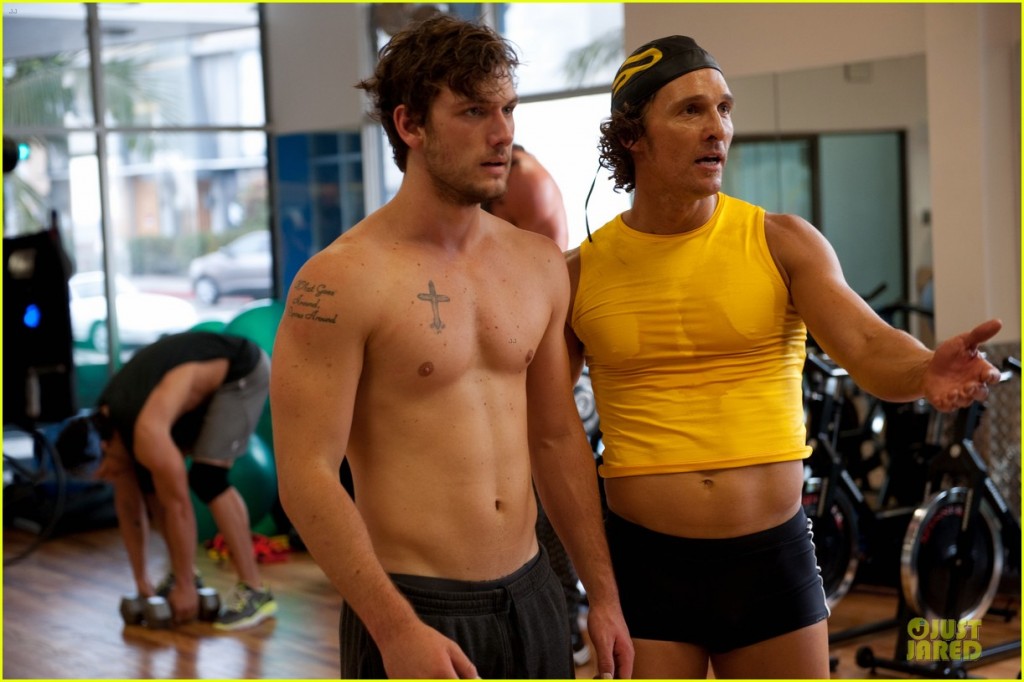 So we went back to my place, and had wild monkey sex….

The story is, on reflection, almost too simple. Older, wiser male stripper introduces new, flashier guy to the world of stripping, teaching him all he knows, until young pup becomes lost in the corruption and seedy dark side of the industry. Older stripper meets young pup’s sister, falls for her, and ends up having to choose between the stripping life and the clean-living life she offers. See, it nearly writes itself. As mentioned earlier, it’s almost a male version of Showgirls. Where the films differ is in their intent – Showgirls was simply an exercise in gratuity, while Magic Mike makes a fair attempt to humanize the stripping industry. It’s all in the context, I guess. Soderbergh, in trying to make his characters feel more human than simple lumps of grinding meat, gives us Channing Tatum as the “lovable” Mike, the guy we all want to be, or be with, depending on your gender, and Tatum delivers on the promise given by the title of the movie. He is really good in the role, although I did feel at times the part didn’t really require much of a stretch from him. Tatum was a real-life stripper back before he hit the cinema big-time, and the scuttlebut of the film’s production indicates a lot of the material was based on, or at least drawn partially from, his experiences within the industry. In a way, this leaves it hard to denounce the film as being unrealistic or pure fantasy – no doubt there are heightened characters in Magic Mike that surely wouldn’t exist in real life – and thankfully, Soderbergh never tries. 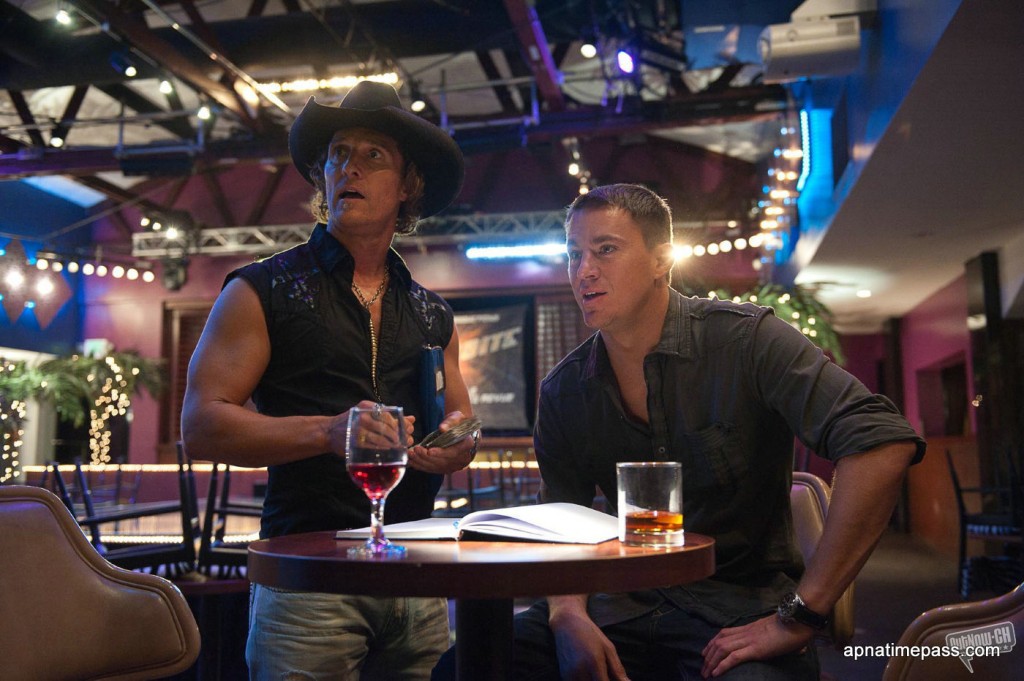 My God, that man has a penis larger than my head!

Opposite Tatum are two competing leading men, Alex Pettyfer, as The Kid, and Matthew McConaughey as Dallas. Pettyfer carries his role well, although his story lacked substance and his arc seemed shoehorned into the film towards the latter stages – he goes from clean-cut All American Boy to drugged-up sleaze-bag in the space of ten minutes, which wasn’t explained or detailed well enough to connect emotionally with me. I think it was problematic pacing, perhaps a desire to keep to the Mike-centric storyline, that caused this. McConaughey, meanwhile, has an absolute blast as Dallas, and he’s easily the stand-out character in the movie. McConaughey could have seriously upstaged everyone else with his campy, larger-than-life portrayal of a man trying to expand his empire and stepping on all who stand in his way; thankfully, Soderbergh restrains him just enough so that he doesn’t overwhelm the film completely. It’s a prime role for McConaughey, and suits his personality to the ground. Cody Horn, as Mike’s love-interest, seems bored by the whole thing; I’m not sure what Soderbergh was doing behind the camera, but Horn goes through the whole film with a sour, I-just-sucked-a-lemon look on her face, and if this film was real life, there’s no way Mike would even look at her twice, I’m sure. Her character seems too argumentative to be friends with the easy-going Mike…. 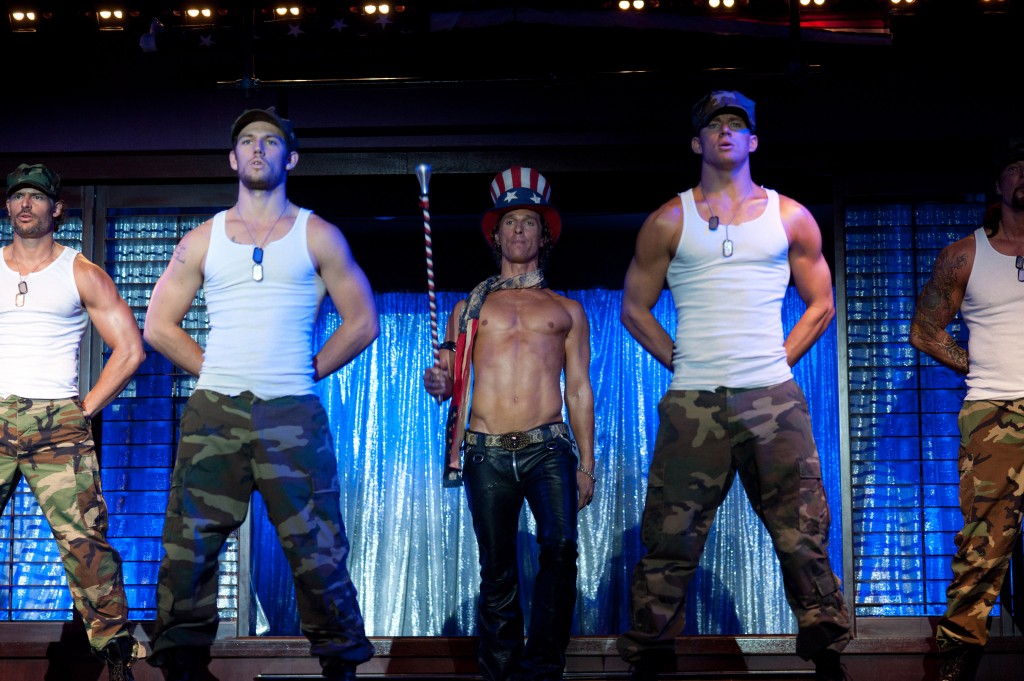 Almost nothing to add here…

Magic Mike’s simple story and relatively un-complex characters should make for a fairly simple film event, right? Well, not quite. Sure, there’s a lack of depth to everyone on the screen, and the story is as rote and Hollywood as they come, but somehow, Soderbergh makes it work. I mean, the film defies its inelegant foundations and manages to eke out a substantial amount of uncluttered entertainment. It’s surprisingly good, considering all the elements working against it. Tatum has a weird, cro-magnon man magnetism to his performance style, and Alex Pettyfer solidifies the things I said about him in my review of I Am Number Four, while Olivia Munn and Cody Horn provide nice-to-watch female roles in an otherwise very blokey film. Magic Mike isn’t a terrific film, but it is a pretty good one.