Director :   Jonathan Dayton & Valerie Faris
Year Of Release :   2012
Principal Cast :  Paul Dano, Zoe Kazan, Anette Benning, Antonio Banderas, Steve Coogan, Elliot Gould, Chris Messina, Deborah Ann Woll, Alia Shawkat, Toni Trucks, Aasif Mandvi.
Approx Running Time :   104 Minutes
Synopsis:  A successful (but struggling) young writer encounters a flash of inspiration when he invents a female character for his next novel – only to find that he’s willed her into existence.
What we think : This charming romantic fantasy is a magical, delightful, whimsical gem. While it may take time getting off the ground, and certainly won’t be a film admired by all, Ruby Sparks is cinema at its finest – it’s a great story, with great characters, and all performed perfectly. A lethargic pace undoes some of the good work at times, but persistent viewers will be rewarded with a subtle, well made work of magic.

Say that you’re an author, and you suddenly find that the character in your latest book has actually appeared in real life thanks to some kind of magical, cosmic confluence, and whatever you wrote about that character gave them those characteristics? If you’re a pervert, you’d write that character with larger boobs, or hotter body, right? I know what I’d do, and it wouldn’t be what happens in this film. Ruby Sparks is, testosterone-driven fantasy aside, a terrific little film that asks you to imagine a world where a literary creation actually springs into existence. It’s a fantasy of sorts, although approached in a very humanistic fashion, thanks to the dynamite script by lead actress Zoe Kazan. Kazan, who stars alongside her real-life partner Paul Dano, examines relationships and the search for “perfection” within our other-halves, those we love, and what we’d change about them if we could. It’s not the blistering indictment on human failings one might imagine, say, if this film came from the minds of the Farrelly Brothers, but a gentle rumination on the fallibility of trusting somebody else with our feelings and emotions. It’s a sweet, often moving love story, although not quite the way you’d expect. Think indie-art-house romantic comedy, instead of Jennifer Anniston dreck. 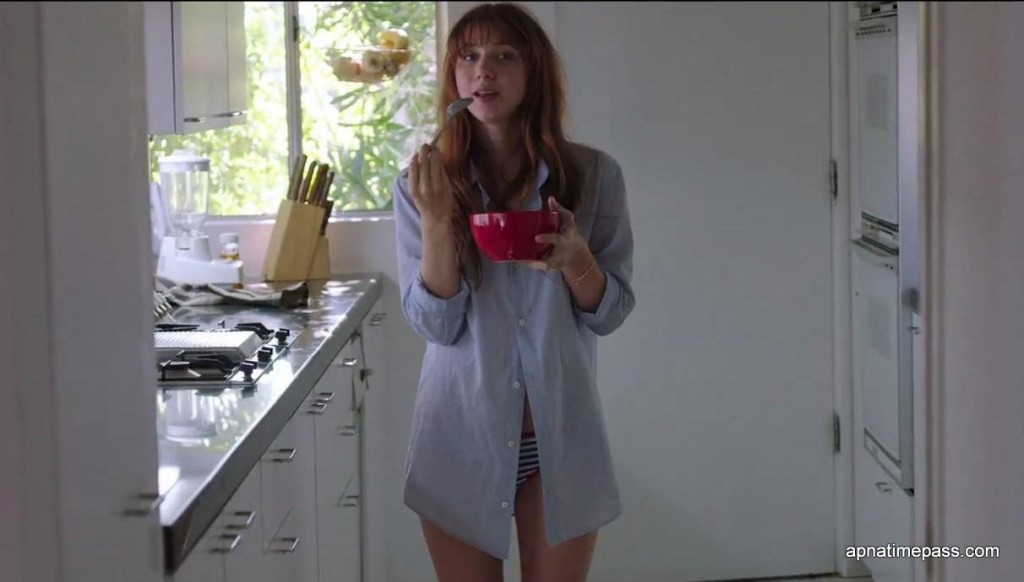 Are you kidding? I always lick the spoon…

Calvin (Paul Dano) is a young, highly successful novelist – his first novel is touted as an American Classic – struggling with coming up with a worthy sophomore effort. His psychiatrist (Elliot Gould) persuades him to write a page of bad writing in order to unblock his mental speed-bump, and in doing so, triggers Calvin into creating his “perfect” dream woman. Appearing only in his dreams, the woman, whom Calvin names Ruby (Zoe Kazan) drives him to a creative level he’s not had since his early career – until one day he wakes to find that Ruby has appeared in his apartment. At first Calvin thinks he’s going crazy, until he proves to himself (and his brother, played by Chris Messina) that she is a real-life, flesh-and-blood person. Suddenly, Calvin has the perfect girlfriend – he’s created her, and so has put all his desires about the perfect girl into her personality and history; he knows her better than she knows herself. Calvin even takes Ruby to meet his mother and her partner (Annette Benning & Antonio Banderas), before things start to spiral out of control. Ruby starts to question her relationship with Calvin, who has become somewhat demanding of her time and the company she keeps. As their relationship begins to show cracks, and fall apart, Calvin begins to realize that perhaps it’s not Ruby who needs to change (and change her he does!) but himself – at what cost, though, will this understanding come? 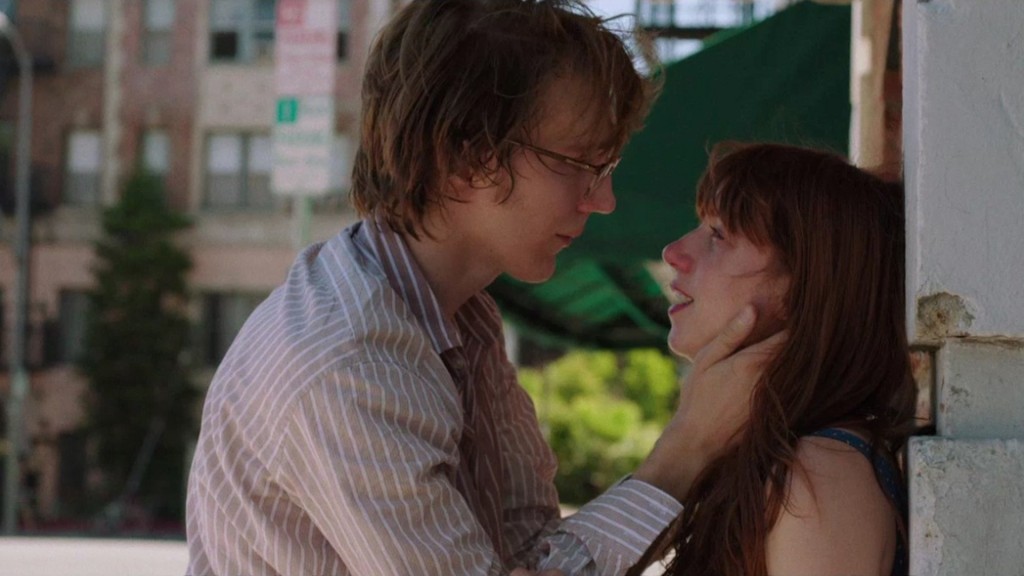 If I grab your head like this, does it feel intimidating? Or romantic?

When one considers the fact that it’s one of man’s greatest fantasies to create and understand the perfect woman (some might say this has already been achieved, in inflatable form!), it’s unique to find a film written by a woman about this very issue. Feminist slant notwithstanding, Zoe Kazan’s elegantly simple script – and the performance of it by the cast – never comes across as preachy or predictably pointed; Ruby Sparks is a subtle, intelligently written effort from somebody keen to avoid alienating one half of the species. This could have easily been a soapbox for feminist expectations, inasmuch as Calvin’s desire for female affection overrides his moral and ethical boundaries when he starts “modifying” Ruby to suit himself, and Ruby becomes simply a creature of whim. It might have been simpler for Kazan to have Ruby start to override her “programming” – in saying that, it sounds a little Stepford Wives here doesn’t, it? – and give Calvin the old heave-ho, but she never does. Instead, Calvin’s journey of self discovery is more layered, more realistic than a beating around the head with monologing female anger. In a way, Ruby becomes a slave to Calvin’s desires, and through this slavery, she educates him about himself in a way his psychiatrist never could. The trick to all this is making it not a finger-pointing lesson, but a moral story that sneaks up on you and takes you pleasantly by surprise. 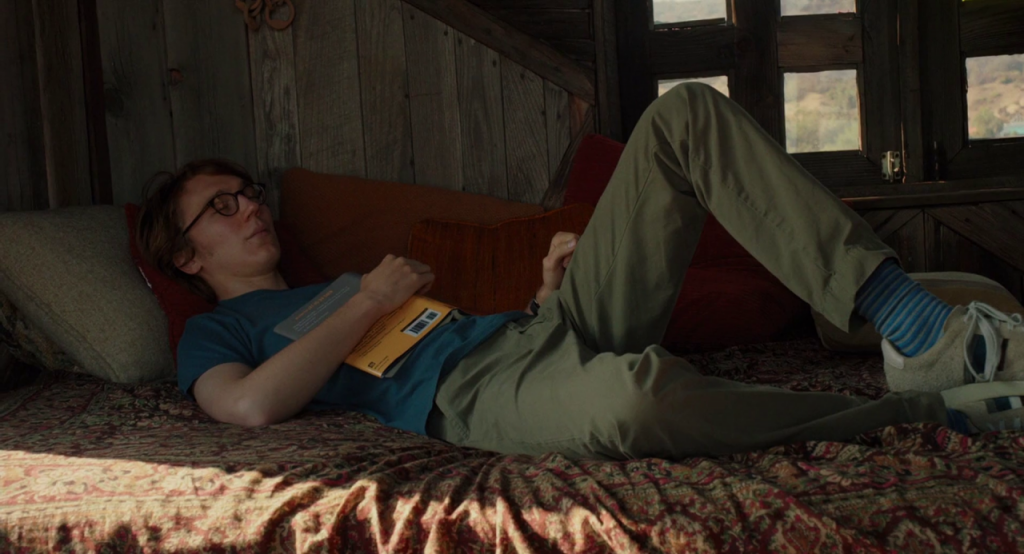 Ruby Sparks is a surprising film: it never goes where you think, never outstays its welcome, and finishes on one of those indie-film “what if?” moments that, depending on my mood, infuriate or infatuate me. The directors, Little Miss Sunshine helmers Jonathan Dayton and Valerie Faris, do a marvelous job keeping the film grounded in a sense of believability, even if the conceit is one of the more fantastical of its type. While the film could have opted for the Bruce Almighty kind of humor and pizazz, this sense of core truth and “well, if it did happen, what would the outcome be?” realism ensures the narrative arcs are never lost amongst the elements of fantasy. It’s a lot like Stranger Than Fiction, in a way – itself a brilliant film, and well worth visiting if you’re a Will Ferrell fan! – in that it doesn’t dwell on the fantasy of the concept, but uses the concept to tell the story through character and emotion. 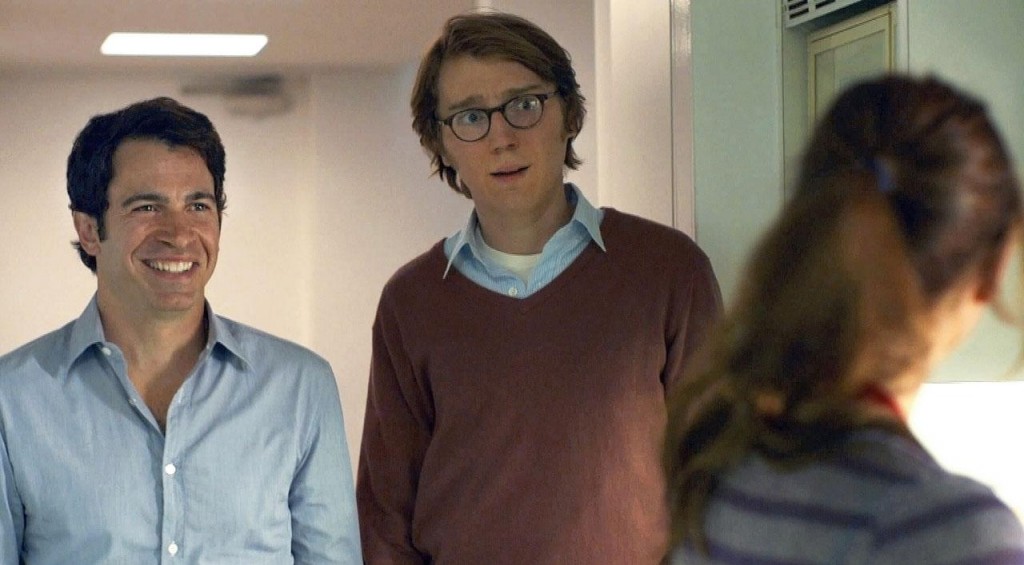 Gary, why do you have that guilty look on your face?

Paul Dano holds the film together as Calvin. Calvin is a flawed hero; he’s lonely, since his previous girlfriend left him just after his father died, and he’s struggling to write his second novel after the enormously unexpected success of the first. He’s selfish at times, he’s angry and bitter about life: he’s the typical guy trying to find a steady rock in a very uncomfortable storm. Kazan writes Calvin really well, with all his tics and subtleties, and Dano portrays him with believable ease. Calvin’s a person we could come to dislike, considering his attitude to Ruby by the end of the film, but with the journey we take, we go with him into that mental state that allows us to understand why he behaves the way he does. Dano’s chemistry with Ruby is wonderful (Dano and Kazan are a real-life couple), and in the happier moments you can really feel the emotional bond between them. Kazan feels like she’s doing some kind of riff on Zooey Deschanel’s unique style here, although that could just be me projecting some other kind of fantasy. She’s whimsical, lyrical and coquettish, resulting in a mixture of aloof independence and fragile-ness all at the same time. Chris Messina is the comedy relief of the film, as Calvin’s brother Harry, and brings a lot of fun to the movie (especially where there normally isn’t any!) while Annette Benning and Antonio Banderas have an obvious ball as Calvin’s mother and step-father respectively. 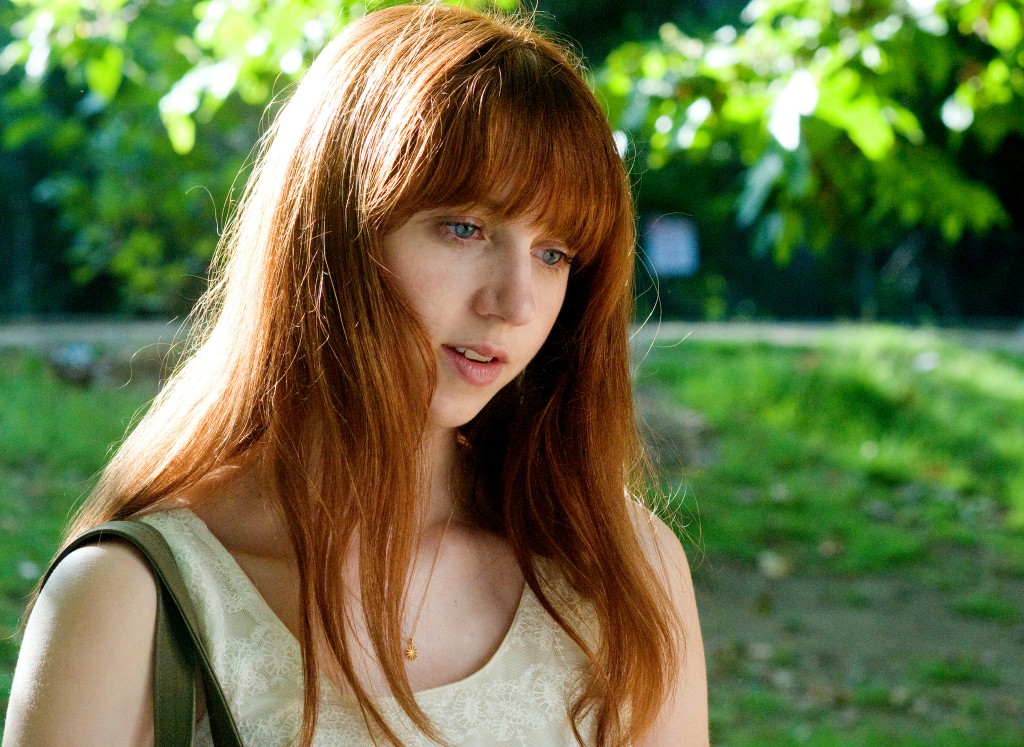 If there’s a downside to Ruby Sparks, it’s the occasional drop in pacing. From time to time, the film seems to slow considerably and start to drag; scenes with Calvin at his mothers place, in particular, are fun to watch but don’t really bring any meat to the story, and thus we don’t get to see Calvin interacting with Ruby in the way we want. The film isn’t a long one, coming in at just over an hour and a half, but there were a couple of times I did check my watch to see how long I’d been watching. From an intellectual level, this film is quite stimulating, but for those seeking more gratuitous entertainment, you’re probably going to be yawning well before the end credits on this one. Ruby Sparks is a delightful film – at least, I found it so – while others might find it hard going; if you’re into quality stories and characters, and don’t mind the grey matter being worked over occasionally, you’ll find plenty of reward in giving Ruby Sparks a go.