Director :   James McTeigue
Year Of Release :   2012
Principal Cast :  John Cusack, Luke Evans, Alice Eve, Kevin R McNally, Brendan Gleeson, Sam Hazeldene, Oliver Jackson-Cohen, Pam Ferris.
Approx Running Time :   111 Minutes
Synopsis:  Edgar Allen Poe, the American author and poet, is swept up in a mystery surrounding his own ghoulish prose, as a serial killer taunts both he and the police with crimes reflecting those in his stories.
What we think :   Stylish and handsomely mounted, yet ultimately underwhelming period thriller, with John Cusack as verbose as ever, The Raven seeks to reveal the final days of Poe’s life were spent hunting the kidnapper of his love, a woman named Emily. The mystery within the film is confusing and overly complex, lacking cohesion and a sense of thoroughness, and the denouement is decidedly ho-hum: The Raven revels in visual grandiosity and yet the story manages to remain largely non-compelling.

I guess it was bound to happen eventually, somebody stringing together a Gothic mystery around the final days of the life of Edgar Allen Poe, the man who practically invented American Gothic horror. Poe’s writings, from classic stories such as The Pit And The Pendulum and The Tell-Tale Heart, have riveted readers since their original publication in the early part of the 19th Century. A prosaic writer, Poe was found dying on a park bench in Baltimore, Maryland, raving nonsensically, before passing away four days later. The cause of his death has never been definitively proven – conspiracy theorists at the time mumbled about cholera and rabies, among other causes, although the initial listing named “inflammation of the brain”, a common result of alcoholism, as the primary descriptor. Whatever the case may be, the mystery of Poe’s untimely death at 40 seems to have haunted literary circles ever since. The Raven, a largely fictional account of the last days in Poe’s somewhat tortured life, has the famed literary giant chasing down a serial killer, a killer who seems to be copying the murders Poe writes about in his stories. Mixing the violent, often Gothic world of 19th Century Baltimore with the parallel Gothic world of Poe’s own work is probably a fait accompli, although having said that, for all its visual style, The Raven isn’t the grand collision of intellectual brilliance one might have expected. 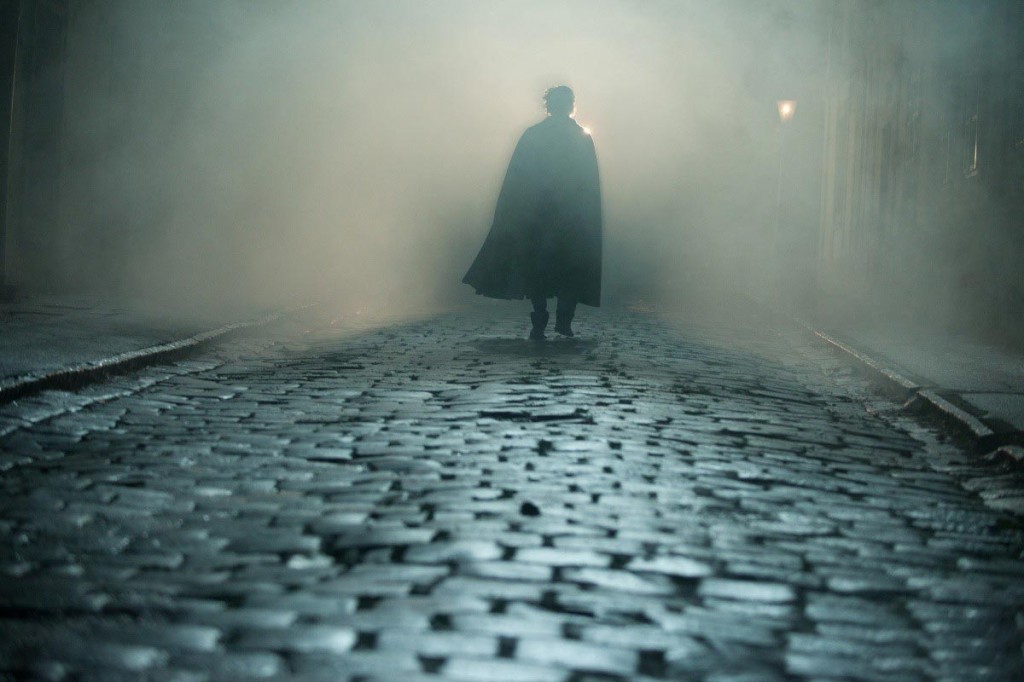 In 1849, Baltimore, local police are shocked to discover a seemingly fantastical murder scene – a woman has had her throat slashed, while the killer has escaped from a room in which the door was locked and the window nailed shut. Arriving at the scene, Inspector Fields (Luke Evans) discovers the crime scene has similarities to a story written by Baltimore author and poet, Edgar Allen Poe (John Cusack), a man who frequents drinking establishments and has no money. Poe is trying make money by critiquing other poet’s works, although this proves fruitless – his publisher, Maddux (Kevin R McNally) refuses to print material that won’t sell papers. Poe, having fallen for local lass Emily (Alice Eve), is at loggerheads with the girl’s father, Captain Hamilton (Brendan Gleeson), although one evening Poe proposes marriage, to which Emily agrees. At a birthday ball in Emily’s honor, she is kidnapped by the very man who is committing these brutal slayings, and held hostage in return for Poe writing a semi-fictional account of the killings. As Fields and Poe begin to unravel the clues to the killer’s identity, they race against time before Emily dies buried in a secret location, and the body count begins to rise. 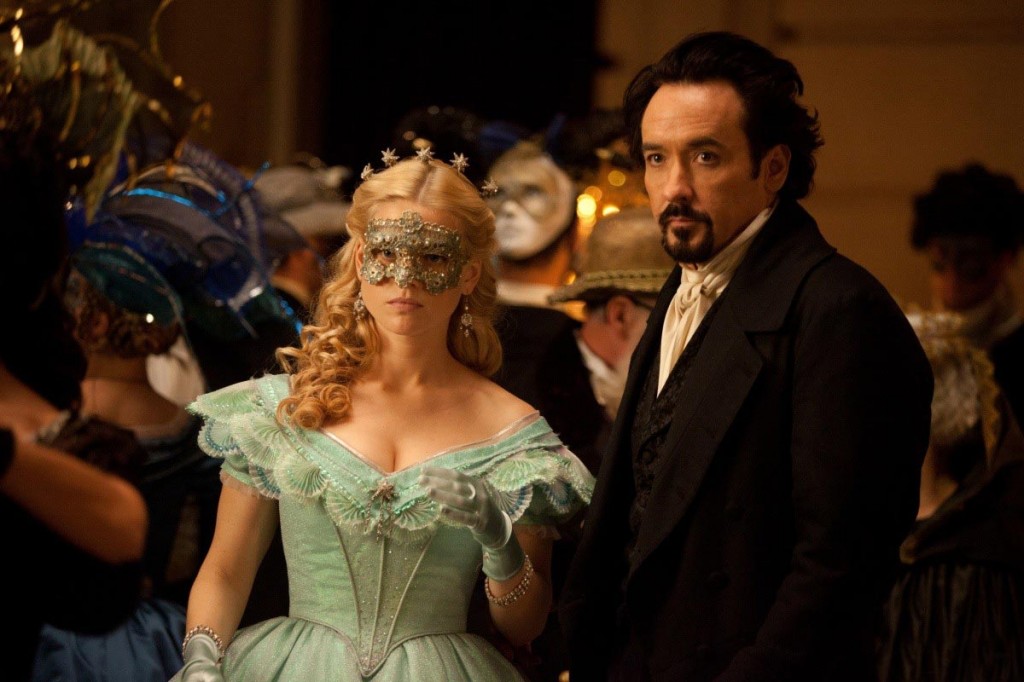 James McTeigue’s career has been one of mystifying success. An Aussie lad, McTeigue carved a name for himself as assistant director in projects made here Down Under for folks like George Lucas (first AD on Attack Of The Clones, as well as working on the Matrix sequels), before stepping into the director’s chair for films such as V For Vendetta, which was terrific, and Ninja Assassin, which… well, wasn’t. Considering his CV prior to Vendetta wasn’t the longest list Hollywood’s ever seen, he’s certainly done well for himself. The Raven is another of those crisply stylish films for which McTeigue has come to be associated – the clean, unfussy visual palette McTeigue uses is evocative of the Wachowskis, inasmuch as every frame, every shot, every edit is designed to service the story in a highly produced manner. There’s not a frame in V For Vendetta which isn’t crystal clear and with deep focus, and that style has followed him into The Raven, although it must be said that the use of dense shadow and stark light in this film mitigates some of that clarity. 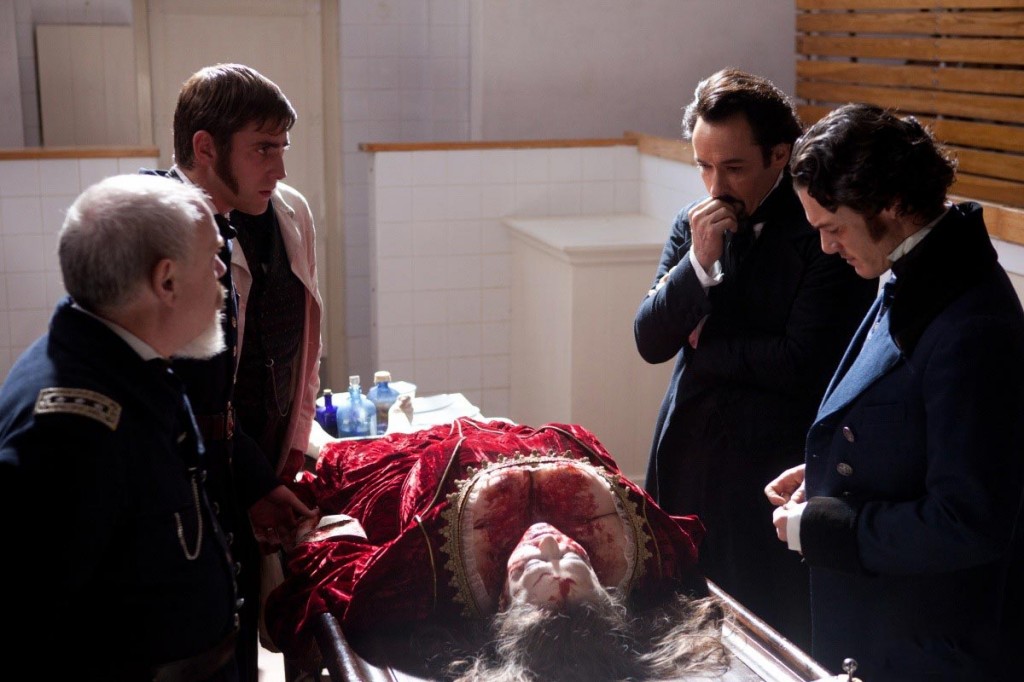 No, seriously, where did you guys leave the car?

The story of The Raven is purposely obscured; this is fiction, after all, but surrounding that fiction are facts about Edgar Allen Poe that we cannot alter (although I daresay Quentin Tarantino’s way of “altering” history might have made us all laugh!) and it’s this mixture of faction (factual fiction?) that gives the film its frission of believability. While no documented evidence might indicate the events of the film have any basis in reality, they make for salacious theorizing. The story of the kidnapping of Emily, and Poe’s fight to secure her safe release through solving a complex set of puzzles and murders, is just the bloodthirsty narrative that a man of Poe’s literary style might have appreciated, if he didn’t enjoy the lure of sordid criminality. Poe is often portrayed in fiction as a man whose soul is tortured (the death of his wife, Virginia, of consumption, a catalyst for his darker writings, perhaps) and who might have been a “mad genius” much like Mozart, and The Raven tries to offer some acknowledgement of the darker side to a man vastly misunderstood. Whether it’s true or not probably isn’t as important as the legacy he left behind, leaving The Raven with a job ahead to try and make sense of the man’s increasingly fragile state, the further he plunges into the darkness. 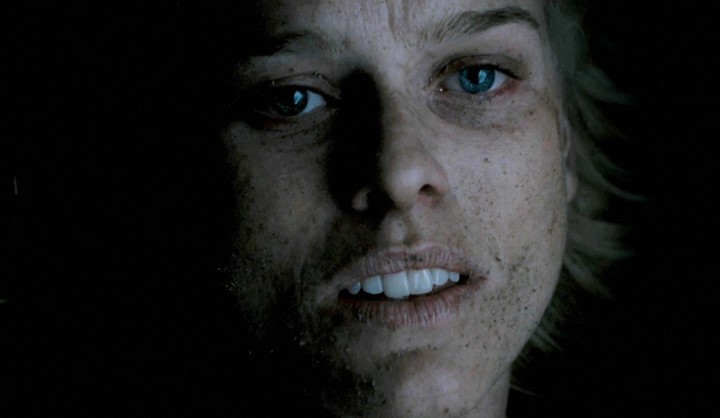 When I get out of here, I’m so moving to California.

I felt the scripting and the narrative, one of which follows Emily’s desperate attempts to escape her kidnapper, were well defined and easy to follow. The film never conceals a truer depth than what’s on offer on the screen. There’s no mystery to Poe himself, only the mystery he is trying to solve. John Cusack delivers a loquacious Poe using language only as Cusack can; the dialogue given to the Poe character here is deliciously pointed, barbed and perceptive. Cusack’s delivery leaves a little to be desired, and at times he feels like a modern man trying too hard to sound of the period, but the dialogue itself sparkles. Luke Evans is suitably police-y as Inspector Fields, a man who initially despises Poe, but who eventually comes to recognize him for his genius. Exactly how he comes to recognize that genius is itself a mystery to this film, because the script offers no “lightbulb” moment for it to occur, rather the somewhat cumbersome character beats which lead to this revelation seems to flop about on screen and exist merely to service this ill-conceived arc. Evans has little to do other than be a policeman, but he does it well enough. 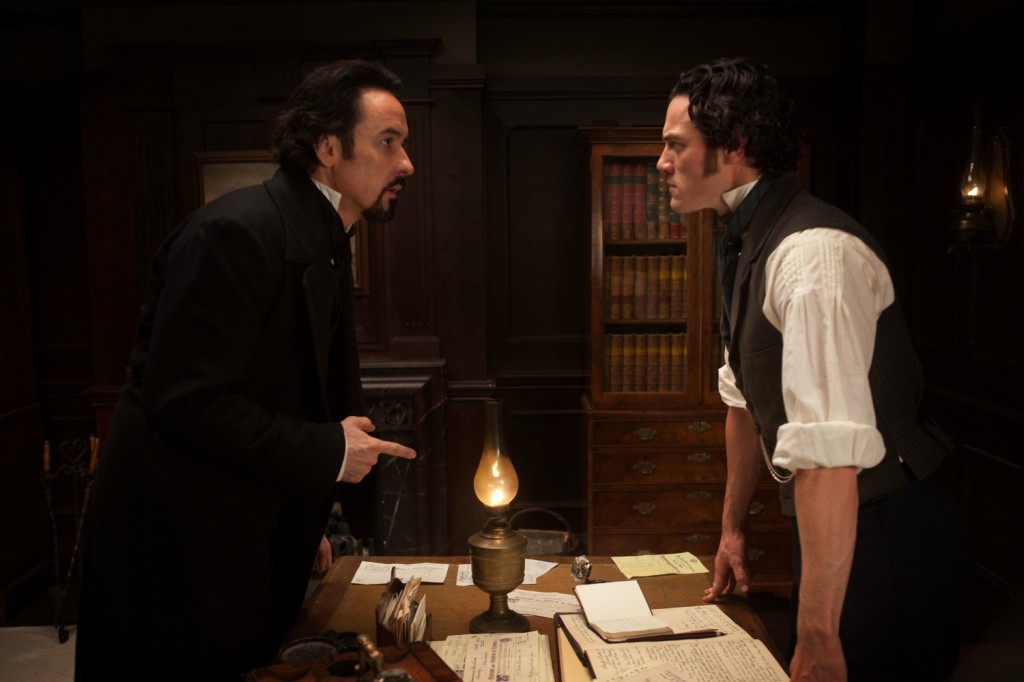 The luminous Alice Eve, who delighted with a great showing in She’s Out Of My League, is cast as the Fair Damsel In Distress in this, and although her role is generally a lot of panting, screaming and lying in the dirt, the moments where she’s allowed to speak with Cusack’s Poe are lilting in elegant dynamism. It’s not a great role, but what little she’s given she works well with. Brendan Gleeson, as Eve’s on-screen father, is a blustering, ill-tempered military man with little time for fools and authority – so he hates Poe – and Gleeson is true-to-form as the grouchy parental seeking the safe return of his daughter. Kevin R McNally serves penance for his part in the Pirates Of The Caribbean movies in a bit-role as the publisher of the local Baltimore newspaper. 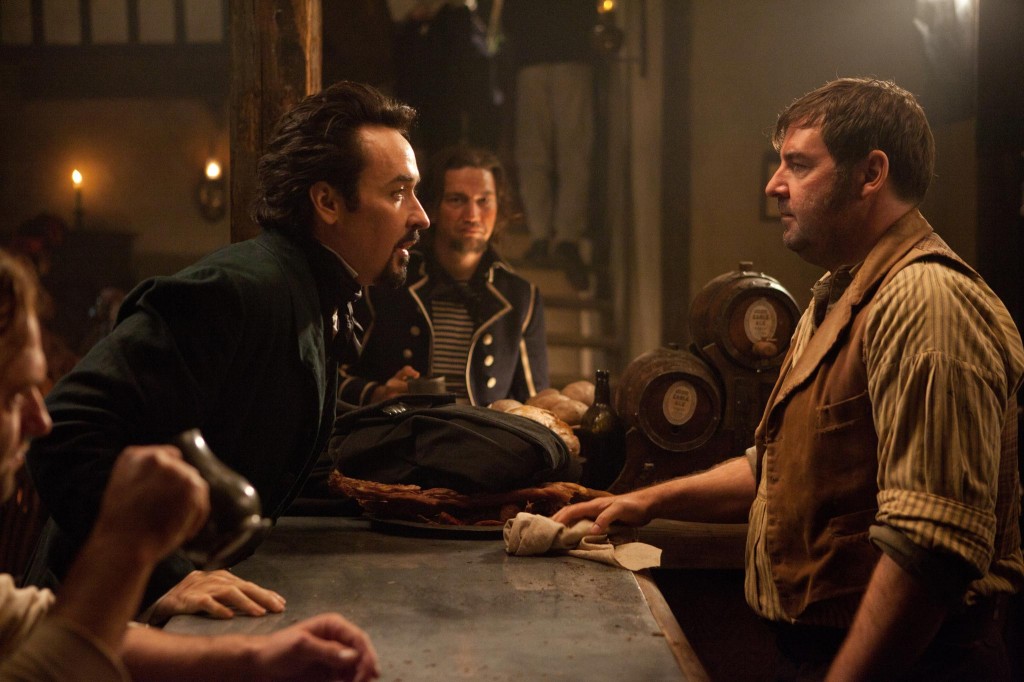 The day Rodney arrived at The Bar None.

While the story ambles along from murder to chase sequence, the narrative gets bogged down trying to keep the mystery afloat while developing the character of Poe, and his relationship with both Emily and Fields. The script isn’t strong enough to do it all convincingly, so instead of focusing on one or the other, does both with mediocrity. McTeigue keeps the pacing fluent and light, which assists with the rapidity in which the mystery is resolved, but it never quite gels with the characters. They behave inconsistently, as if the passing of time isn’t recognized and this film takes place over months rather than days. The Raven’s iconic bird reference is given tacit acknowledgement, and although the imagery of a blackbird reappears throughout the film, one never gets the sense that it’s any kind of harbinger to the plot. It’s just a visual cue that the film is called The Raven, and little else. The sense of ambivalence to the central plot, which goes for intellectual mystery but ends up being more a procedural and a run-and-gun affair, can’t quite match the literary cues offered up by Poe’s writing, and this meandering, often dissolving, content can’t seem to muster the strength to remain interesting. In the end, the film’s cribbing from Ryan Reynolds’ Buried is too burdensome, and Cusack’s earnest performance too… modern, to keep this film grounded. The tone of the plot, alongside the more Gothic tone of the visual style of the movie, don’t quite mesh as well as I’d have liked. 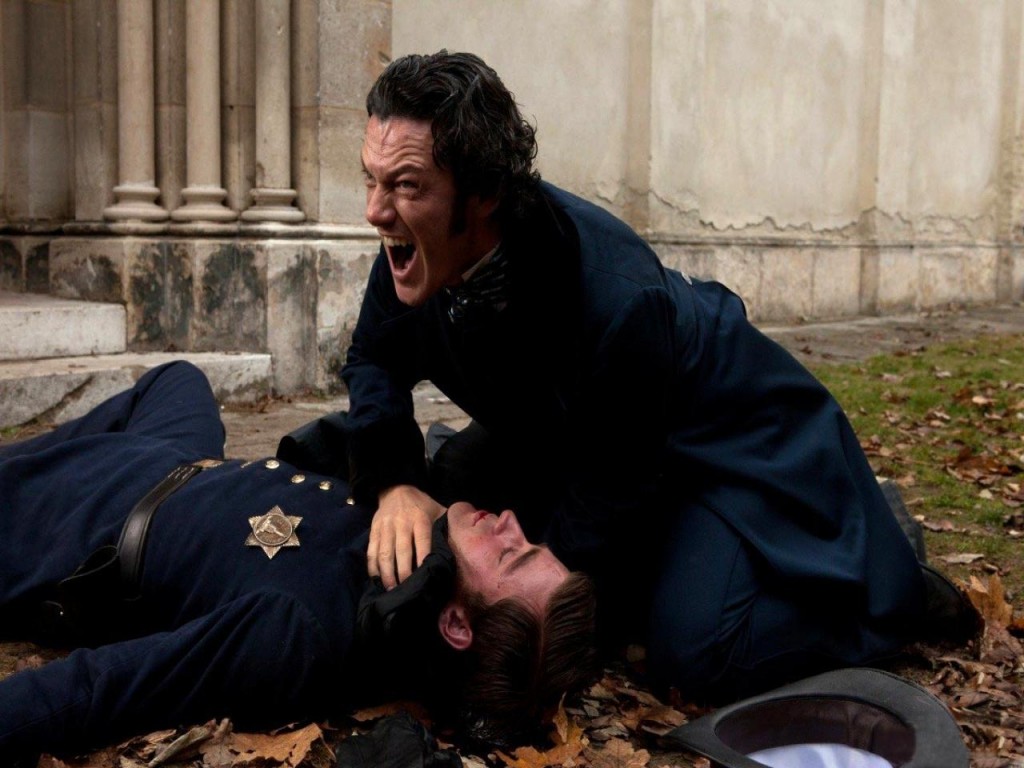 The Raven is, at best, a middling affair; it’s neither magnificent nor is it pitiful. Cusack is typically talky, the film scrabbles with mystery and flirts with echoes of Sherlock and From Hell, but remains a tenuously empty, callow story on which little emotion rests. An extended knowledge of Poe’s literary work might allow you to elicit more enjoyment, although I doubt even that will lift the final mark on this film. The Raven is a bloody, messy, often empty film, and should be approached with lower than normal expectations.