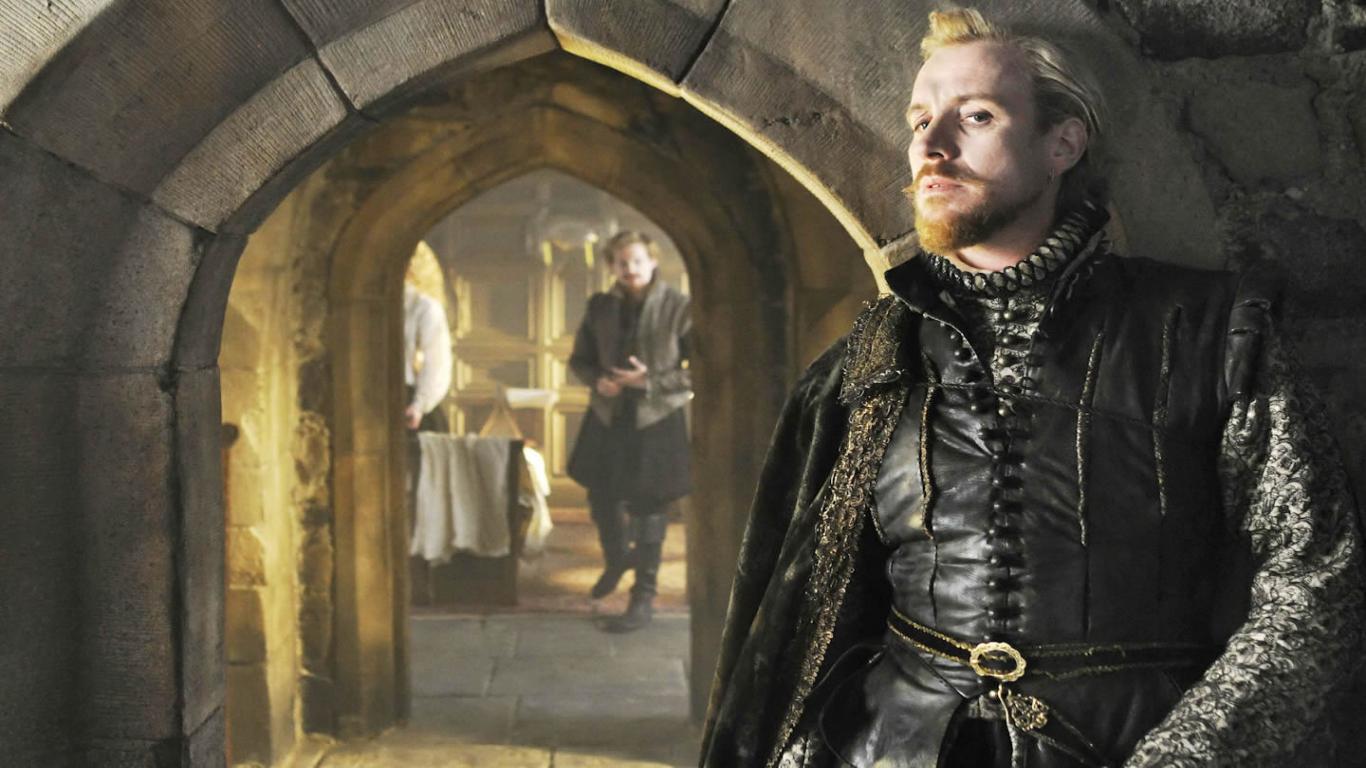 Director :  Roland Emmerich
Year Of Release :  2011
Principal Cast :  Rhys Ifans, Vanessa Redgrave, Sebastian Armiesto, Rafe Spall, David Thewlis, Jamie Campbell Bower, Edward Hogg, Xavier Samuel, Sam Reid, Joely Richardson, Paolo De Vita, Derek Jacobi, Helen Baxendale.
Approx Running Time :   130 Minutes
Synopsis:  In the reign of Elizabeth I, the authorship of the plays of William Shakespeare is brought into question.
What we think :  Bogglingly dense political-historical thriller will confuse most, confound others, and baffle nearly all. Ripe with contentious allegations of fraudulent authorship, Anonymous is controversial for its depiction of somebody other than Shakespeare as the author if his works. The cast are magnificent, the cinematography and production design stunning, and Emmerich’s direction steady as the very bedrock of 1600’s London; if you can cope with the startlingly brazen time-jumping and the incredibly dense roster of characters to follow, you’ll probably find this film fascinating as an alternative historical document than the one we all learned in school. Truth, apparently, is a matter of opinion.

You don’t screw with The Bard.

He has long been regarded as one of the finest literary minds in all of human history; his 30+ plays, countless sonnets and poems, and sheer volume of respected works have become established English language mainstays for centuries. William Shakespeare, however, is seen by many as a fraud. It has been claimed by those who follow the Oxford theory, that the works of Shakespeare were actually penned by a nobleman during Elizabeth I’s reign, the 17th Earl of Oxford, Edward de Vere. The question of authorship has long been disputed by both sides of the argument, although exactly what’s at stake for the “winner” of the argument baffles me – surely, no matter who wrote them, the quality of the work itself is not diminished? In any case, the weight of a major Hollywood director has been thrown into this controversial subject, in Roland Emmerich, a man best known for destroying the planet in nearly all his feature films thus far. Watching films like Independence Day and 2012, you might find it hard to imagine that a director of such commercially successful blockbusters might risk his reputation (ha!) on a film about the great English playwright, but it’s true. There’s no approaching asteroid, no gargantuan alien army, no marauding menace from Mother Nature here: no, Anonymous pits Emmerich against his most powerful foe yet – the English language. Does he succeed in making sense of the arguments? Does Emmerich lay waste to the naysayers and poppycockers that claim Shakespeare alone was the author of literary gems such as Romeo & Juliet, Hamlet, and Macbeth? Or is Anonymous too wrapped up in its own mystique to make much sense to anyone other than those for whom the argument remains a legitimate question?

It is nearly the end of the reign of Queen Elizabeth I (Vanessa Redgrave), and there is dispute as to the authorship of the plays assigned to William Shakespeare (Rafe Spall); fellow playwright Ben Johnson (Sebastian Armiesto) is held prisoner in the Tower Of London and is being questioned by Robert Cecil (Edward Hogg), the Earl of Salisbury. An insurrection, manipulated by Edward de Vere (Rhys Ifans) when those who conspire to overthrow the Queen are uncovered, fails, leaving the works of Shakespeare, apparently, incorrectly attributed.

I’m no expert on Shakespeare, but even looking at the most miniscule evidence I did while researching this review, it’s a fair bet that some, if not most, of the plays attributed to the man weren’t written by him. I know, there’ll be some who cry heresy at that statement, but how can any rational, free-thinking man believe that an illiterate man like Shaksepare could produce some of the most glorious prose in the history of language. Regardless of your thoughts on the matter, this controversy only serves to fan the flames of Anonymous’s often zealous charges against the legitimacy of old Willie’s claim to authorship. The film presents itself in a cloud of political and dramatic postulating and posturing: Anonymous is a terribly dense film to watch, and for most people I suspect it’ll be too much. The film wanders tangentially through a variety of time periods, skipping back from present day, to Elizabeth I’s later reign, and back again to the early part of her life, all to try and encapsulate the eras that influenced one of literature’s great authors. Which, on reflection, is probably the film’s key failing.

Anonymous is written by John Orloff, who is better known as a scribe on projects as diverse as Band Of Brothers and Legends Of The Guardians: The Owls Of Ga’Hoole. Orloff worked on this project for the best part of a decade, and you get a sense of his dedication by the sheer volume of material crammed within it. The script bounces between characters and time periods with little care for the understanding of the audience, and so filled with information, so teeming with political intrigue and maneuverings, is the story that the 2+ hours of film time doesn’t quite seem enough to really complement all Orloff is trying to say. That being said, there’s times in this film when you wish it could all be over; Anonymous covers so much material, so many characters and so much time, that you’ll probably miss a lot on the first viewing. Whether you go back for a second or third helping of this revisionist Shakespeare flick depends on your tolerance for exposition – the entire film is exposition. If I was to be bold as a critic, I’d say this film was to Orloff what JFK was to Oliver Stone; smoking gun and all. Roland Emmerich does a commendable job bringing all the nuances, flavors and smells of the Elizabethan era England to life.

The trouble is, the film doesn’t quite know when to quit, nor does it keep focus on a single character. Because of the vast number of people involved in this story, due to its inherent political nature, Orloff’s decision to cram everything into the story brings the thing undone to a degree. The lack of focus on a single emotional narrative prevents the audience from really investing emotionally in the plight of one character – instead, we’re asked to enjoy Rhys Ifans’ Edward de Vere, and Sebastian Armiesto’s Ben Johnson, and Vanessa Redgrave’s terrific Elizabeth I, all at the same time without having one to lead the way. Roland Emmerich doesn’t seem interested in character development at all, instead bringing the films controversy angle to bear and the effect it has on the various characters. This, plus the highly literal dialogue (which is pretty accurate for the time) makes Anonymous hard going even for those who know what’s going on!

Emmerich has built a reputation for being a director of the Mega Blockbuster, films which spend millions upon millions to entertain through only the crudest characters and the most salacious visuals. Anonymous attempts to correct that imbalance by allowing the director to helm a project of literary substance, controversial or not. Where Emmerich is used to explosions and devastation on a global scale, now he’s dealing with the same concepts in the literary sense, and you know what? I think he gets it right. Visually, the film is extraordinary; the movie was filmed primarily in Germany, although you’d never tell, thanks to the glorious production design and marvelously hidden visual effects. Every frame is picturesque to perfection, from the gritty mud-and-filth soaked streets of the south bank of London, to the more austere northern bank with the Tower Of London and the Queen’s residences. Emmerich’s ability to frame scenes and develop the world of Elizabethan London is exceptional, so there’s at least success in the visual department here.

Performances across the board are exemplary. The entire cast, and I mean the entire cast, never put a foot wrong, in either delivery or characterization; leading the charge is Rhys Ifans, who is soulfully circumspect and potently driven as de Vere, bringing an intensity I’d not seen in him as an actor before. Vanessa Redgrave, as the older Queen Elizabeth, is simply breathtakingly powerful in her delivery – she reminds me of Judi Dench for the ease of her ability not to look like she’s acting. Redgrave’s real-life daughter, Joely Richardson, plays the younger version of Queen Elizabeth in a casting coup – Richardson’s nowhere near the level of her mother, but she’s good enough not to shortfall on this dual role. Sebastian Armiesto is commendably solid as a competing playwright, and of all the players here, it’s he who provides the most poignant emotional performance – he’s the Everyman character here, in a role I saw paralleled with F Murray Abraham’s Salieri in Amadeus: Ben Jonson wishes he could write like de Vere, but cannot, so he remains content simply to be a lesser man. It’s a potent portrayal of a man destined to be forgotten by history, although you’d never know it. David Thewlis plays the puritan William Cecil, a powerful member of the Queen’s privy council, while hunchbacked son Robert, played by Edward Hogg, provides the film with a powerful one-two punch of nemesii. Both these actors are sublime in their respective roles, oozing malevolence and a corrupting influence over the kingdom through their beliefs; men who believe they’re right often make the best villains. Finally, Rafe Spall deserves credit for his mincing, often flamboyant portrayal of Shakespeare as a conniving dilettante, and whether this is accurate or not doesn’t prevent the role from being a hoot.

The film is bookended quite potently by a monologue by Sir Derek Jacobi – himself a vocal proponent of the Oxford theory – and it’s here that Emmerich sets up the story, and the motivation to tell it, quite well. It’s the attention to detail that Emmerich provides the film with that I really enjoyed, regardless of the story. The unfolding drama seemed to my untrained eyes to be a collision of ideas and concepts, of personalities in clash with one another, and without a direct motivation as to why this story needed to be told in the first place. It is a well told story (if you can follow along), but the film’s about twenty minutes too long, and not focused enough on the core story, which should have been the authorship of Shakespeare. Brief elements of political intrigue, most of which revolve around the Cecils and Elizabeth, become tiresome and bewildering in their complexity, when all I wanted to do was follow Shakespeare, de Vere and Jonson on their arcs to understanding what makes this controversy tick. Pare back some of the literary ebullience, and I’m sure there’s a nice little film in there somewhere. Unfortunately, as is, Anonymous buries itself with its own expectations, and collapses with the weight of information it tries to impart.

Anonymous plays like a more cerebral version of Shakespeare In Love, just without the love, or Judi Dench. It skewers its critics with an abundance of supposition and incredible analysis of every counter-argument; many might find its central story lacking in focus, and plagued by an overdose of characters with their own agendas, but at its core Anonymous remains a loud, forceful film arguing against the legitimacy of one of history’s greatest writers. Whichever side of the conspiracy you come down on, regardless of your appreciation of the works of Shakespeare himself, there’s little doubt that Anonymous provides ripe fruit for discussion, and that in itself can only be a good thing. Densely plotted, almost infuriatingly so, Anonymous is recommended only on the strength of Ifans’ performance and the hilarious work of Vanessa Redgrave as the Queen.