Director :   Eric Valette
Year Of Release :  2008
Principal Cast :  Shannyn Sossamon, Ed Burns, Ana Claudia Talancon, Ray Wise, Azura Skye, Johnny Lewis.
Approx Running Time :  87 Minutes
Synopsis:  A series of missed calls to Beth’s friends prior to their deaths leads her on a chase uncover the source of it all: a grisly fire at a hospital, a child-abusing mother, and a ghost that won’t quit.
What we think :  Terrible, ham-handed shock-schlock movie with no redeeming features whatsoever. Even in the truest of the Z-movie echelon, One Missed Call is missing the single ingredient which might make it watchable: coherence. Devoid of dramatic impetus, favoring cheap scares over an interesting (or comprehensible) plot, and a complete lack of talent in leading lady Sossamon, this film bungles every potential swipe of the jugular to capture the audiences attention. It’s barely scary (sure, the darkness and uber-powerful spirits lurking in every phone call!) and not even the slightest bit entertaining. A debacle from beginning to end.

For everyone who’s ever seen the Japanese horror film Ringu, which was remade by Gore Verbinski into the passably scary The Ring, with Naomi Watts, you’ll understand why my disdain for Hollywood remakes of truly terrifying Asian cinematic horror grows with each passing year. For every Ringu and Ju-On, there’s terrible Hollywood versions a few years later (although I actually thought The Grudge was a half decent remake itself) that destroy the shivering fear established by the originals. One Missed Call is yet another of these remakes, based on the Takashi Miike film from 2003, although it completely lacks Miike’s visual acumen and style. Instead of the victims watching a VHS video, or uncovering a curse, or anything normally quite scary, One Missed Call attempts to put the fear of God into voicemails now, with the deathly victims of this film falling prey to a future-sent voice message, only to die horribly later on. Next there’ll be a film where people open an email and die horribly, and they’ll call it You’ve Got Mail or something equally stupid. Wait, they did that one already? One Missed Call attempts to capitalize on the externalized death message genre craze that swept Hollywood horror during the 2000’s, but which thankfully seems to have died off in recent years. PG13 horror isn’t exactly horror, really, because the gore is reduced in favor of “jump” scares and creepy, discordant sound design, most of which consists of breathing funny, off-key orchestral strings, and slam-bang music cues. 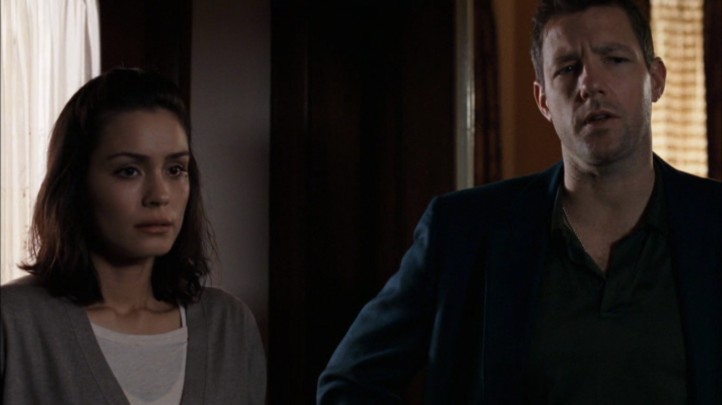 Let me get this right…. nobody in this film owns an iPhone?

Beth (Shannyn Sossamon) is worried when four of her friends die horrible deaths after receiving messages from themselves sent from the future. A police detective, Jack Andrews (Ed Burns), whose sister died in the same circumstances, teams up with her to uncover exactly who is making these calls. Piecing together the clues, they uncover a dark secret involving a child-abusing mother, a deadly fire at a hospital, and an asthma inhaler. They also decide to walk into dark rooms without turning on the lights, make bad career choices, and not once explain what’s going on to each other because that would mean being clever, and horror-film characters are never clever. 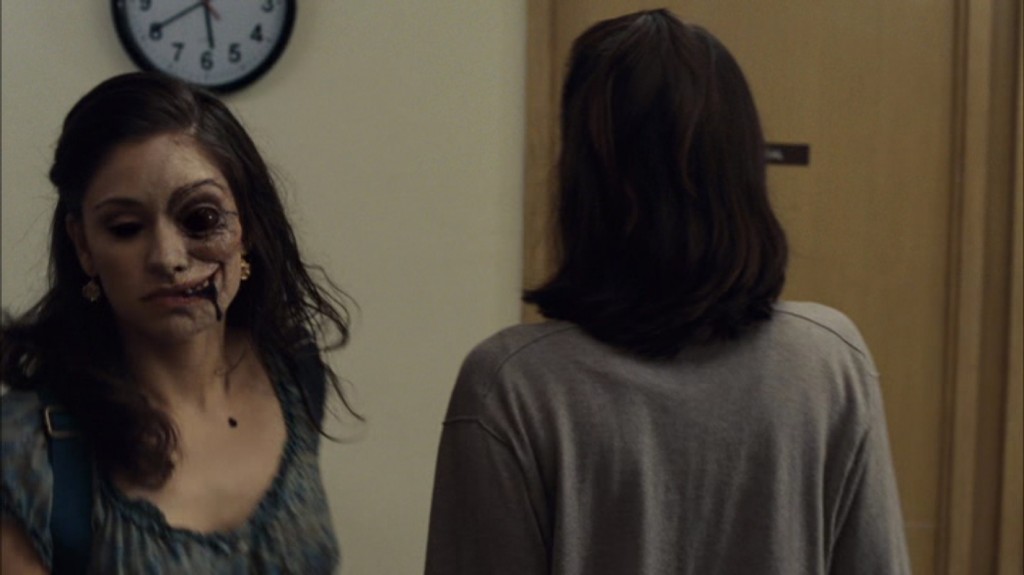 Don’t let them put you in the chair, Lori….

Watching One Missed Call, I was left with the disturbing feeling that I’d seen all this before – the disbelieving police, the amazingly obtuse friends, the clumsy and built-to-die ineptitude of construction workers and workplace safety, the amazing cell phone reception one gets when you destroy your phone and throw it away only to have it still ring, and of course, the final, “shocking” twist that seems to come at the end of every one of these terribly derivative films. Yes, One Missed Call swipes every genre cliche in the book, throws it up on the screen in a manner befitting shit of this magnitude and asks Ed Burns to slum it through what is, essentially, absolutely dire film-making. The opening scene, in which a hot young nubile is dragged underwater by an unseen assailant – only to be followed moments later by her cat (because cat’s are known to spread rumor and gossip, and possibly reveal the plot to other cats later in the film) – sets up the creep factor for the movie, but after that, when people actually have to start acting, the movie falls apart. 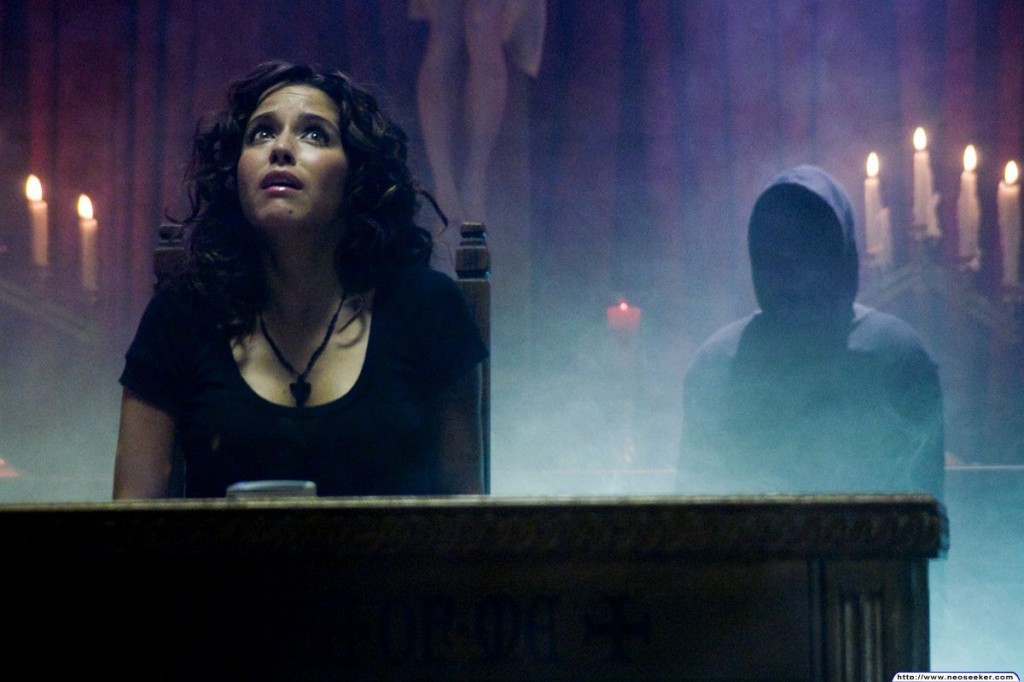 In place of actual characters, we have cardboard cut-outs of characters. Not one single real human being exists in this film, thanks to a woefully ham-handed script that avoids developing characters and instead gives us the stereotypes we crave so much. The weepy, possibly suicidal girlfriend, the disbelieving brother, the foster-mom who’s really nice, the police  officers who don’t believe what’s happening, and of course, the creepy, snap-jump-edited central ghost, who pulls weird CGI faces and hides in corners. Once you add these elements into the mix, shave the running time down to a (thankfully) brief sub-90 minutes, and it’s little wonder there’s no time for creatively adding any emotion or nuance to the story. Sossamon herself, as the central lead in this thing, is woefully inadequate. Her ability to convey convincing emotion is as believable as Justin Bieber’s career, gosh darn it. Sossamon doesn’t so much act as she reacts, with a wooden performance not too far removed from the front door of her house she’s so terrified of. Ed Burns does his best (and he’s not too bad) but can’t overcome a dearth of material with which to work that doesn’t involve running, looking confused, and more running. His relationship with Beth in the film is about as sexual as death. 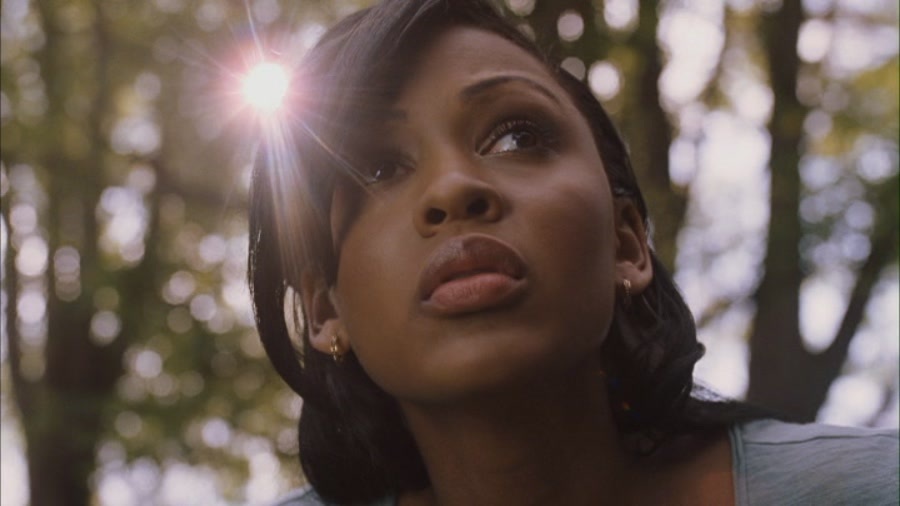 I’m only in this film for three minutes.

Director Eric Valette, who, to the best of by knowledge, as not directed a Hollywood production since this one, helms this thing with the subtlety of farting in an elevator. In place of coherence and logic, we’ve got shadows, rapid-jump cuts and vague notions of being scary. At first it might seen ingenious to play a creepy ringtone to indicate the ghostly messages have arrived, but it soon becomes dull and tedious. It might also seem cool to show a few Final Destination-style death sequences as well, although these are ill-defined and hardly as ingenious. One plot device is the addition of a reality television show trying to aide one of Beth’s friends, Taylor (Ana Claudia Talancon) by performing an exorcism on the girl’s phone (hint, it doesn’t work, because exorcisms are soooo 1970), which also gives us the generic television producer in Ray Wise (shoulda made more use of him, Mr Valette). The film bungles the red herrings and subtext of much of its material, eschewing sanity for generic thrills, all of which soon become just a blur of noise and light. 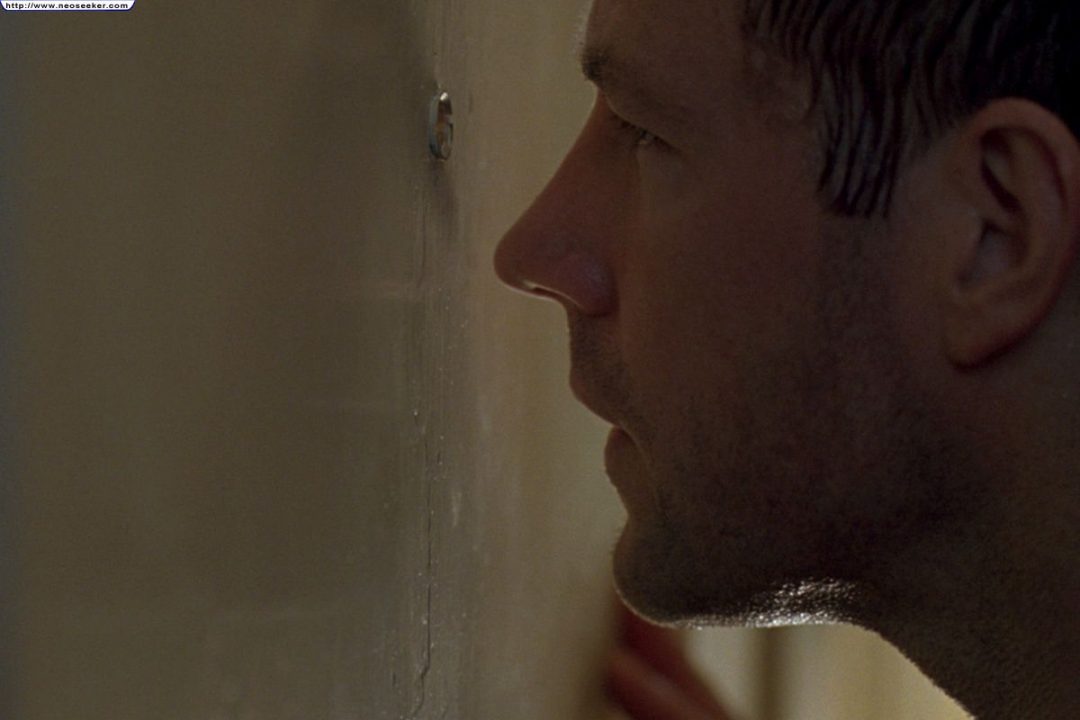 Yeah, making us all afraid of peep-holes since…well, forever….

One Missed Call might be a little freaky for the younger teen crowd who will undoubtedly watch it, but for normal, reasonably mature adult minds, it’s a dire, uninspired, generic knock-off of almost everything Hollywood’s given us before. With wooden performances, ordinary scripting and uninspiring direction, One Missed Call is a film you’re better off missing, indeed. Don’t take this call, just delete the message and get on with your life. You’ll thank me later.