Director :  Batlasar Kormakur
Year Of Release :   2012
Principal Cast :  Mark Wahlberg, Kate Beckinsale, Ben Foster, Giovanni Ribisi, Lukas Haas, Caleb Landry Jones, JK Simmons, Robert Wahlberg, David O’Hara, Diego Luna.
Approx Running Time :   110 Minutes
Synopsis:   Ex smuggler Chris Faraday must return to a life he left behind on order to stop his wife’s brother being killed after a drug run goes wrong. While he’s travelling to Panama to secure a job large enough to erase the debt, his wife and children remain in danger from a local criminal and his henchmen.
What we think :   Violent, nearly-awesome action/thriller plays more like a drama than an outright genre film, giving itself to the audience only in fits and spurts; the action is lackluster, the plot twists shocking (although perhaps not unexpected) and the production shrouded in darkness for much of its screen time. Contraband is an opaque look into the seedy underworld of smuggling between South America and the USA, although through the lens of Mark Wahlberg’s rather bland characterization of Chris Faraday’s stand-up criminal. While moments in this film are well made, there’s plenty of dull spots between them, resulting in a film which attains “so-so” status, not the exciting greatness the trailers would aspire to.

If Jason Statham is the go-to guy for dependable b-movies in England, then Mark Wahlberg must surely be his American equivalent. Wahlberg, who cut his teeth in action films on The Big Hit, Three Kings and The Perfect Storm, has managed to carve a fairly dependable CV from his time in Hollywood; he’s not what you’d consider a frontrunner for an action movie, but when he does transition from dramatic roles such as The Fighter to outright action, he does a commendable job. Wahlberg is an actor I normally consider “vanilla”; not quite as rough as a Bruce Willis or a Stallone, nor as slick as Statham’s brooding, menacing approach, but a softly-softly style that sets him apart from the majority of his film-making brethren. He lacks the raw intensity of other action stars, yet doesn’t seem to let that stop him giving it a red hot go. I don’t always enjoy a Wahlberg performance, but I give the dude props for always trying to step out of his comfort zone. So what of Contraband, an action/thriller set against the backdrop of New Orleans and the Panama smuggling trade? Does Contraband bring back the glory days of The Big Hit, or is it actually a Big Miss? 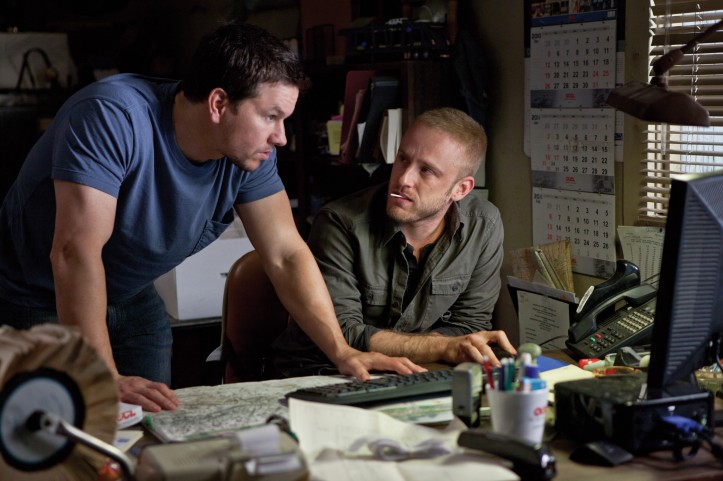 I’m just asking…. what the hell are you doing at The Bar None?

Chris Faraday (Mark Wahlberg) lives with his wife Kate (Kate Beckinsale) and their two sons in New Orleans. Chris is an ex criminal, known as a master smuggler in his day, and a guy whose father is currently locked up and doing time. Kate’s brother Andy (Caleb Landry Jones) is – against his sisters wishes – involved in the smuggling trade, although when a trip goes wrong and he’s forced to ditch a payload, those who made the payment come after him to extract their revenge. With a price on Andy’s head so large he cannot hope to pay it off, Chris decides to get back in the game to save his brother-in-law. Family friend, Sebastian (Ben Foster) takes Kate and the boys under protection, although local drug runner Briggs (Giovanni Ribisi) is intent on seeing Faraday succeed by putting pressure on him through his family. 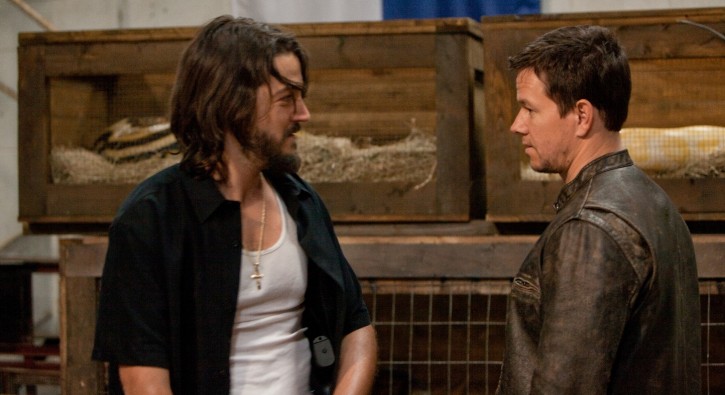 Ahhh, screw it. Okay, I love your sister.

Contraband is almost a great film. It’s almost there. The plot is tight, the characters well defined, and yet somehow the movie manages to miss the mark and really launch itself as a genre classic. The premise is simple: take “one last job” to save the life of somebody too stupid to know better, while putting your own family in harms way. The action, when it arrives, is brutal and chaotic. The direction is, by and large, solid. What makes Contraband less than great, though, is the fact that it’s often quite slowly paced, and nearly over-produced to within an inch of its life. When Wahlberg is on screen, the story bubbles along nicely and remains quite tense; when the action cuts back to his family and the tension back in the USA (Faraday spends a great deal of this film away from the USA) things run a little soft. Director Baltasar Kormakur, who starred in the Icelandic version of thus film (yes, Contraband is a remake of a foreign film) gives the film such a depressing, meandering visual style, in my opinion actually removes a lot of the entertainment in the story. The oppressive European stylings are out-of-kilter with a traditional Hollywood film, leaving the audience with a sense of melancholy terror throughout.

Seriously guys, which one of you punks took my Nintendo DS?

Reading the cast list in the summary section above, you’d forgive yourself for thinking Contraband is some kind of A-list project that would deliver large scale action and thrills with a top-tier performance group. Kate Beckinsale, no stranger to action herself, plays a run-of-the-mill housewife role, Faraday’s devoted wife, who finds herself way in over hear head when the Bad Guys start to encroach on her family. Foster, as Faraday’s best friend Sebastian, is as intense as usual (is there a role in which he’s not the most intense actor you’ve ever seen?) and brings a level of realism to the film that, had he been absent, the film wouldn’t have had. Ribisi’s role of Biggs, the strung-out drug dealer who terrorizes Kate and her kids, is not the creepy dude we saw in Ted, but rather a violent, sadistic thug, and he plays it well. JK Simmons steals the show as the ship captain on the boat in which Faraday smuggles his goods, bringing that gruff antagonism he does so well back in a big way. Lukas Haas and Caleb Landry Jones are commendable co-stars, although they resolutely add very little other than an emotional touchstone for Faraday to succeed. 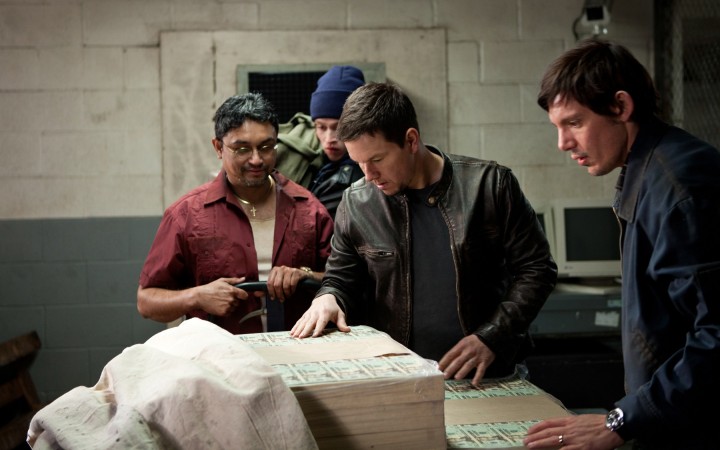 But it’s Wahlberg who leads this thing from the front: his Faraday is a stand-up guy, a take no nonsense, trying to live a normal life man who is placed in a difficult situation. Wahlberg’s always been a bland actor, as far as I’m concerned, and here he delivers yet another breathy, whispered performance as a guy who’s probably not the acting stretch for Wahlberg it might have been for others. Wahlberg’s acting style irritates me usually, with that wide-eyed childlike performance he usually delivers once again just sinking him as a genuine action star. His style seems to come from the Steven Segal school of acting: whisper a lot, sound menacing, and kick-ass when required, but lacking a genuineness to his performances that rob the film of any momentum. It’s a B-movie, I know, and the film doesn’t suffer from a lack of dramatic pathos from Wahlberg, but dammit, I’d at least like him to look like he gives a crap about what’s going on. 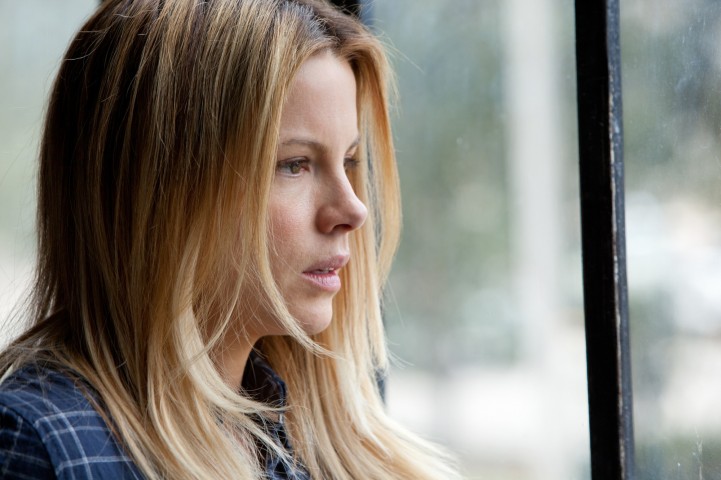 Emily knew she was pregnant – she just didn’t know who the father was….

I mentioned the oppressive visual style: there are times this film descends into darkness so completely you can’t tell what’s happening. The darkness is a true darkness, not a cinematic darkness – yes, there is a difference – and as such, sucks the light and life out of the film in a way that’s hard to quantify. The films visual tone is a parallel to the narrative tone – one of tension and desperation – and I guess if this is the style Kormakur was trying to achieve, he succeeded. Personally, I found it unsettling and jarring against the action-based structure of the film, and it tended to play out more like a violent crime-thriller instead. Perhaps my expectations were skewed in a direction the film didn’t go, but that’s just the way I felt. 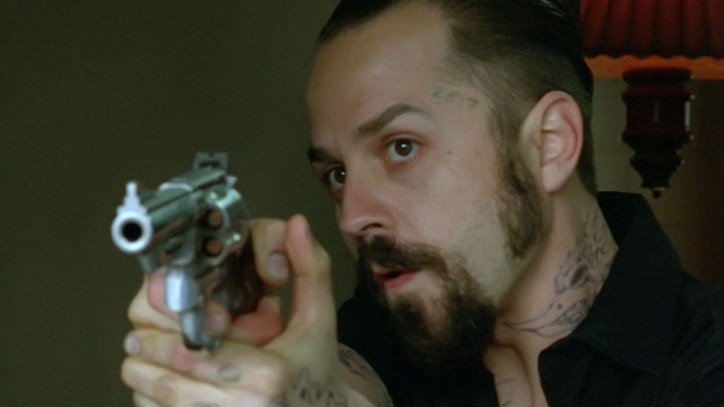 Contraband is a competently made, well acted film, although it doesn’t quite fit the mold we’re used to as an audience. If I was honest, I’d cut about twenty minutes of fat off this film and re-edit it as a more straightforward thriller; less emphasis on putting children in danger and the “meanwhile, back at the ranch” narrative, and more of the Faraday trying to make a deal and get back to his family. That’s the film I’d like to see. The movie I did see, wasn’t that great. It’s good, just not awesome. A bland leading man, giving a competent yet not convincing performance, while his co-stars out-perform him in every way, ensures Contraband remains merely a B-movie done with a better cast than it deserved. Recommended for Wahlberg fans only – everyone else can skip it.