Director :   Mans Marlind & Bjorn Stein
Year Of Release :   2012
Principal Cast :  Kate Beckinsale, India Eisly, Michael Ealy, Theo James, Stephen Rea, Kris Holden-Reid, Charles Dance, Sandrine Holt.
Approx Running Time :  88 Minutes
Synopsis:  Selene returns after 12 years in stasis, to discover she has a daughter and the Lycan’s have begun to resurface after the humans tried to wipe them out. Basically, more of the same.
What we think :  This uninspiring sequel delivers everything fans of the Underworld saga have no doubt been clamoring for, although for the life of me I can’t understand what that might be. Awakening never really goes for the jugular, content instead to remain a middling, flashy-yet-passionless story of a mother and her daughter that just simpers along, devoid of any sense of fun and unable to really make any kind of point. As vacuous entertainment goes, I guess if you’re interested in seeing Beckinsale firing guns every two minutes, and a secondary cast that just does nothing but stand around complaining, then Awakening is the film for you. A meandering, squandered opportunity to return Selene (and Beckinsale) to her rightful place as one of the top female franchise stars of the modern era.

A Vamp Flick With Limited Bite

After a disjointed threequel that never really added to the Underworld legacy, and was missing the central cog that made the franchise work – Beckinsale in a tight black costume – the fourth installment of the not-quite-True-Blood-but-better-than-Twilight vampire saga ekes out tentative entertainment that more often than not, misses the mark completely. Underworld: Awakening ties into the events of the previous Beckinsale episode, Evolution, but never really feels part of the same world, if that makes sense. It’s a lackluster affair, the kind of sequel that is now almost entirely riding on the goodwill of the viewing public without trying to generate any of its own – the film can’t stand on its own as a complete story, nor does it really add anything of import to the franchise overall other than to give Selene a daughter and reduce Scott Speedman’s character (he declined to appear in this film) to a series of flashbacks and poorly executed digital facial doubles. Fans of this saga will no doubt howl with protest at my assessment of this film, because it is basically a carbon copy of the two original films and I guess in that frame of mind this film is absolutely terrific, but as its own entity it remains a missable, unfinished effort that lacks both resolution and coherence. 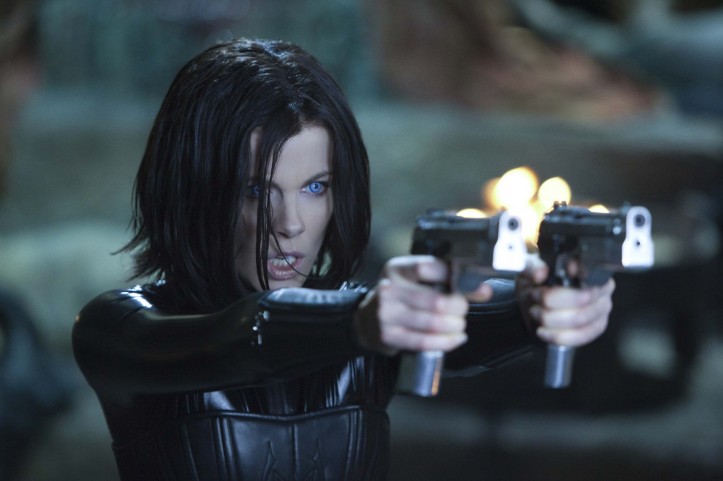 Look at me, firing my guns!!

Selene (Kate Beckinsale) and Michael (a digital Scott Speedman) are leaving by boat after the conclusion of events in Underworld: Evolution, when they are attacked by humans who have discovered what they are. Humanity turns on both Vampire and Lycan kind, systematically hunting them down and essentially engaging in ethnic cleansing to restore mankind to the top of the evolutionary ladder. After Michael is seemingly killed by an explosion, Selene wakes up in a laboratory some 12 years later, to discover that the world she knew has long since passed. Scientist Jacob Lane (Stephen Rea) is experimenting on Selene and an unknown girl (India Eisley) to try and find a cure for the “curse” of being a vampire, although both Seline and the girl, named Eve, escape into the shadows of the city. Together with another vampire, David (Theo James) and a sympathetic police detective (Michael Ealy), Selene and Eve must battle the new Lycan breeds to reassert themselves once again as the dominant species on the planet. 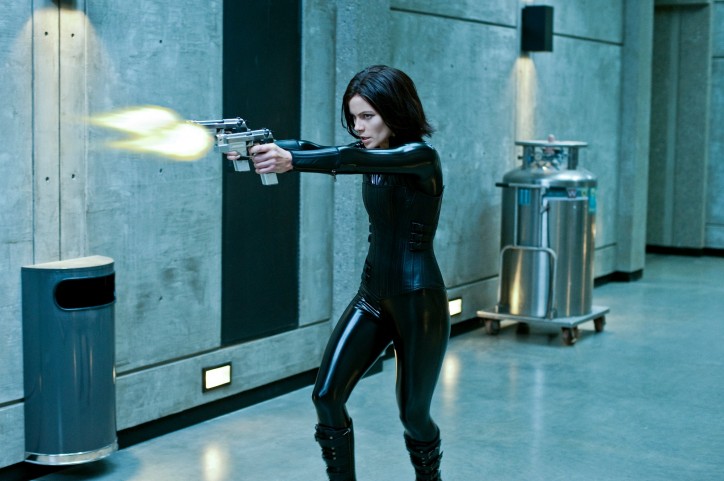 Just me again, firing more guns…. or are they the same ones?

Expecting the fourth entry into the Underworld saga to be an improvement on the increasingly confusing sequels was always an exercise in lost hope. This was never going to be a great film, nor did I really expect it to be. But I did expect it to be at least somewhat entertaining, even if it was in a mindless, slo-mo of Kate Beckinsale kinda way. Frustratingly, Awakening never really even went down the leading-lady-porn route much either, content to eschew original director Len Wiseman’s lascivious cinematic style for a more brutal, savage use of camerawork. Perhaps had it done so, the film might have at least been eye candy where the brain candy went lacking. Awakenings is a poor sequel to what was a relatively entertaining franchise – the second best female-led franchise currently on offer – and the problems stem from an unfocused story. While you can’t expect Meryl Streep-like acting or characters, and you’d be hard pressed to call any of the Underworld films “deep”, you always expect a certain amount of.. shall we say, humanity to these kinds of mindless action films… and Awakening doesn’t deliver. The story feels confused, lacking in direction and focus, cramming in too many underdeveloped characters and containing no real resolution to any of their arcs at all. Not even a (very) short-lived cameo by Wes Bentley, a surprise if ever I saw one, can salvage the movie. 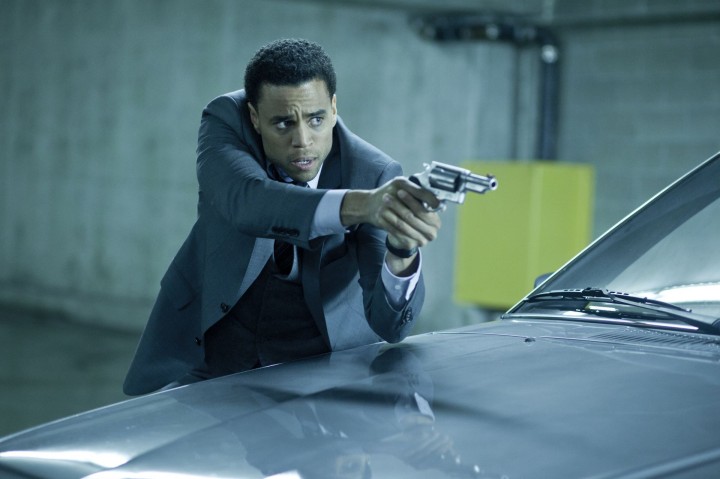 Beckinsale looks a little lost here, to be honest. Her character must surely feel second nature to her by now, but even she isn’t able to generate much empathy from the audience for her plight. She’s obviously annoyed that she’s a mother, the way she carries on here, and is devastated at losing her lover Michael, but the film offers little emotional resonance to this plot device. There’s no truth to it, it just exists to move the plot along a bit. India Eisly, as Eve, provides a fair degree of soulful, pouting childlike qualities to her innocent vampire kid character, but the story doesn’t quite know what to do with her. She’s alternatively frightened and kick-ass, scared and able to attack massive Lycans without a moments pause; the script paints her to be some kind of uber-powerful hybrid creature, and yet the direction and the dialogue only pay lip service to this. Michael Ealy, as the detective with a vampire link (he’s not a vamp, but was married to one) is this film’s approximation of the “human soul” of the story, although again the screenplay misses the mark here. Ealy is a solid actor, and he delivers one moment of explanatory backstory with visible credibility, but it’s a blip amongst the bullets and bodies, and ultimately never amounts to much at all. 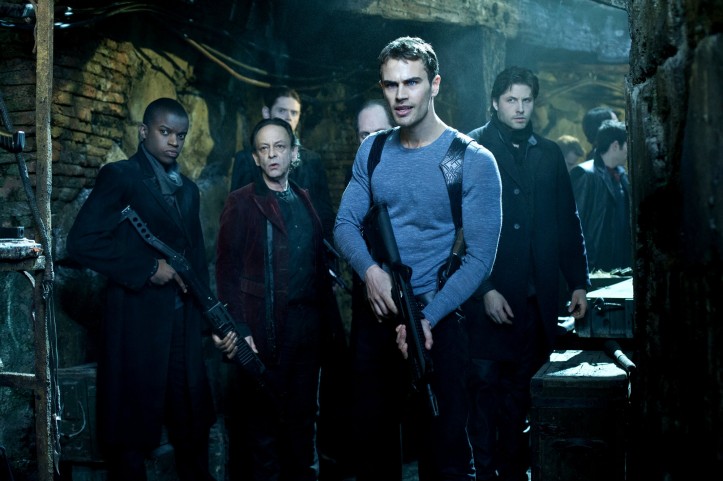 People with guns, ready to fire.

Indeed, much of the story and the characters are lost amongst the haze of continual gunfire, a pounding soundtrack and a general ambivalence to what’s going on. The duo directing team of Marlind and Stein bring a highly visual style to the franchise, sticking with what was established by Wiseman from film 1, and trying to bring a more grounded reality to things. Whether they succeeded or not is a matter of conjecture, I guess, largely due to the genre-specific audience who are most likely to even watch this movie, but I think the directors managed to bring some kind of fresh air to the franchise. The action sequences feel enormous, and considering the vast bulk of it is done with CGI for the Werewolf creatures, believable. The explosions and gunfire rips through this movie, the blood and gore are somewhat toned down (at least by comparison to film 2) and the bone-crunching fights between Selene and a giant, mega-Lycan pummel the senses into submission. Yes, Awakening isn’t a subtle film, nor should it be. I just wish that somewhere beneath the blue-hued cinematography and the glorious production design, some sense of purpose had been realized. The bond between Selene and Eve just isn’t enough to carry this movie.

Hey, you don’t have a gun I could fire, do you?

While I think the mindless fun of the Resident Evil films have the market in this sub-genre of film-making cornered, the Underworld saga isn’t far behind it. Sure, it’s mindless, invariably ineptly scripted, crippled by a deafening soundtrack and devoid of the subtle fun of the original film (and even the sequel, in parts), but there’s something about watching Kate Beckinsale kick werewolf ass in that skintight leather outfit which inexplicably keeps people coming back for more. Underworld: Awakening won’t change your world, it’ll barely be remembered until the collected BluRay sets start coming out, but as a diversion from the Twilight crud, at least this one has Vamps that don’t mind killing.