Director :  David Slade
Year Of Release :   2007
Principal Cast :  Josh Hartnett, Melissa George, Danny Huston, Ben Foster, Mark Boone Jr, Mark Rendall, Manu Bennett.
Approx Running Time :   109 Minutes
Synopsis:   During a month-long polar night, the northern Alaskan town of Barrow is invaded by vampires.
What we think :   Spooky, visually impressive vampire-themed horror film, 30 Days of Night has the unenviable task of trying to live up to the popular comic book miniseries that spawned it. David Slade directs the film with a kind-of perfunctory sensibility, without a lot of overt panache, leaving a more uninvolved viewer feeling a bit “meh”. As a fan of the genre, I was left a little cold by the rather large leaps of narrative the viewer is forced to go through; I’m all for giving the audience the chance to join the dots themselves, but leaving too much information out can lead to a case of “what the hell is going on” more than anything else. 30 Days Of Night is solidly acted, well filmed and is a more refined vampire story than we’re used to (no sparkly vamps here, folks) but much of the visual impact and dramatic flair seems lost with Slade’s rather unimpressive use of the camera and a jittery editing finger.

Oh how I wish Blade was here.

Like many, I’ve begun to deplore the gradual disintegration of the vampire film genre since the introduction into pop-culture of the twinkly, sparkly garbage masquerading as serious filmmaking in the Twilight saga. Long gone appear to be the days of Interview With A Vampire, Bram Stoker’s Dracula, and Blade. It seems that the tweenage market has taken it upon themselves to make vampires more “realistic” by giving them emotions and feelings; to the genre’s detriment, Twilight and its ilk have nearly buried the bloody, blood-thirsty vampire film genre within a coffin of angst and rebellion. Thankfully, however, things aren’t entirely lost. We still have film-makers willing to return the genre to its original horror glory. Vampires are a screen monster, not a lover, or a thing you can fall in love with. They suck your blood, they kill you, and they live forever. Bella Swan shoulda staked that Edward bastard the first moment she lay eyes on him. Who cares what a monster like that feels when you’re angry with them? Not I. 30 Days Of Night, directed by then-future Twilight: Eclipse (which is lesser vampire film indeed) helmer David Slade, is a gritty, well produced – if flawed – vampire thriller that sets itself apart from the pack by virtue of its location. How many vampires do you think originate in Alaska? 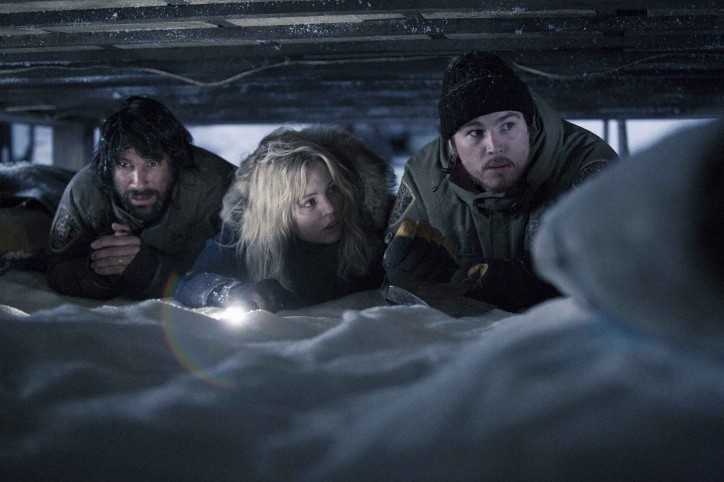 Darren, did you, or did you not, hit on my wife at the dance last night?

Sheriff Eben Oleson (Josh Hartnett) lives in the northernmost town in the United States, a town named Barrow, in Alaska. Recently split from his wife, Stella (Melissa George), Eben is preparing the town for the annual “30 days of night”, when the sun disappears for a month of polar night. However, mysterious events start to take place: the local sled-dog breeders dogs are all slaughtered, all the cell phones in town are stolen and burned out in the snow, and all forms of escape from the settlement appear to be either destroyed or wrecked. A mysterious stranger (Ben Foster) arrives in town, hinting at a coming danger, a danger which manifests itself in the form of a large gang of violent, super-human people intent on killing everyone. Eben and Stella, together with a rag-tag bunch of townspeople, attempt to wait out the month-long darkness by hiding in various houses and stores around Barrow, all the while being hunted by the vampiric creatures who kill with no remorse. As the numbers of living people starts to dwindle, and the month of night starts to draw to a close, the stakes are raised as the entire town is set alight by the vampires in an effort to draw the survivors out for slaughter. 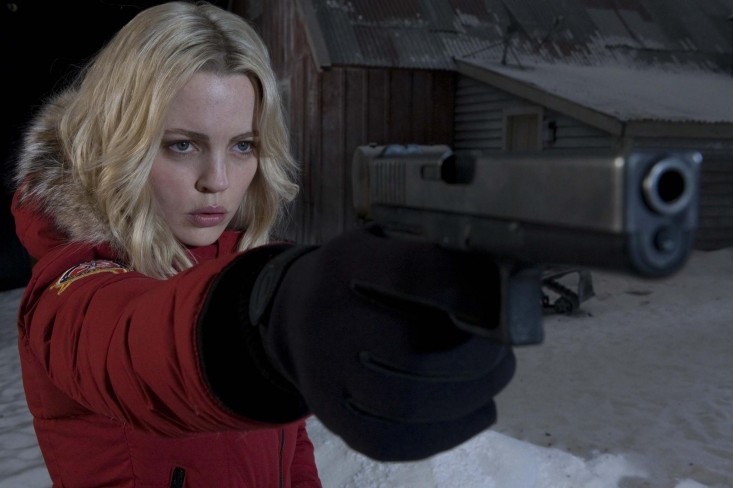 Confession to those of you reading this: I’ve never read the original comic on which this film is based, but from what I’ve gleaned from scouring the internet, apparently it’s a damn fine read. Comparisons in this review will not be forthcoming, however, because prejudicial side-by-side-isms aren’t possible this time round. What this film does so well is set the scene: Barrow is a desolate, barren wasteland of a town, right up in the Arctic circle, where you’ll die from hypothermia long before old age. Hard to imagine the near-entirety of the film was shot inside enormous sound-stages in New Zealand…. 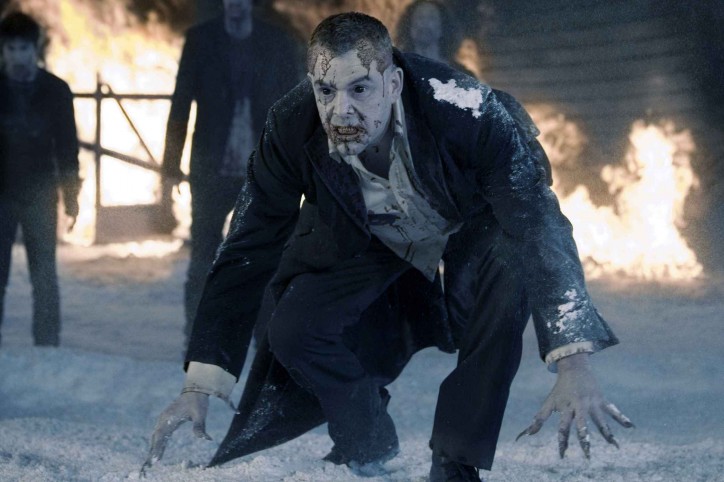 Say, you guys haven’t seen a sparkly vampire teen and his werewolf bitch around here, have you?

While the films visual component is solid as a rock, the story itself is equally up to the challenge of maintaining one’s interest. The premise, of a group of people trapped in their town with no way out and no hope of rescue, trying to survive against a stronger, faster and unstoppable enemy, is nightmarish in itself, but where the success or failure of the film lies is in its characters. Unfortunately for 30 Days of Night, the characters in the film feel more contrived and cliched than you’d expect. Eben is a solid, disbelieving-yet-resolute lawman, Stella is a strong-willed firebrand wife who, for reasons unexplained, left Eben shortly before the film opens. Ben Foster provides the creepy human/vampire historical context, wandering into town babbling about “them” coming to kill everyone. Danny Huston plays Marlow, the leader of the vampire pack, although he’s never named in the film (nor does he seem to develop as a character beyond hissing, growling and speaking an alternative language) and as a villain, he’s passably entertaining. The rabble of Barrow’s population fall neatly into the genre’s tropes with ease: the town outcast/nutcase, the young boy who overcomes his fear to save the day (kinda), the token black dude who must be sacrificed so the rest of the group might live, and of course the hysterical women, the Alzheimer’s-afflicted elderly who seem unable to stay quiet juuuust when the Bad Guys are prowling around downstairs, and the panicky “we gotta make a run for it” dude who inevitably makes a tragic run for it. 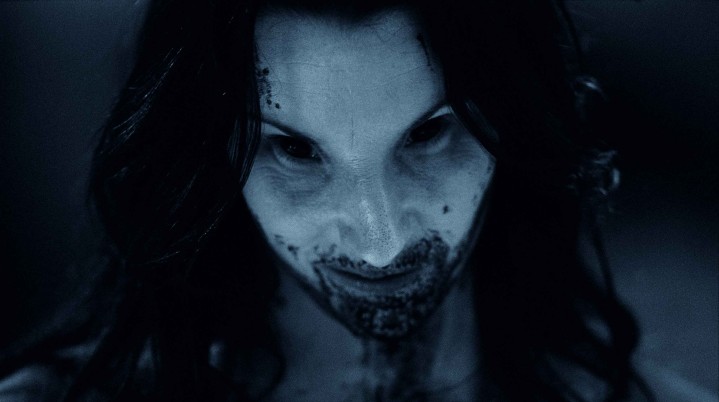 Creepy? You bet. Sexy? A little…. okay, not really.

30 Days Of Night’s premise is set up really well; the desolation of the location is evident, and Slade gives us a nice primer for just how barren and hopeless the ensuing conflict is likely to become. However, once the actual meat of the movie kicks in – the waiting for 30 days so the sun can come back and scare off the vamps – the film tends to fall back a little too much on genre generics. The blood splatter and rapid-shutter shooting style Slade employs to give the film a visceral quality works well, but it’s like paining over the cracks – eventually the cracks reappear. Character-wise, the film is too thin on the ground giving us people to really care for. Eben and Stella’s fractured relationship is never explained, seemingly existing only to be a story hook to provide some momentum for the actions of our characters, but Slade’s unable to generate much real interest in this aspect of the story. In the end, it’s a pause-kill-pause-kill film technique which, while admittedly stylishly executed, finds one wondering not if somebody’s going to get killed, but when. 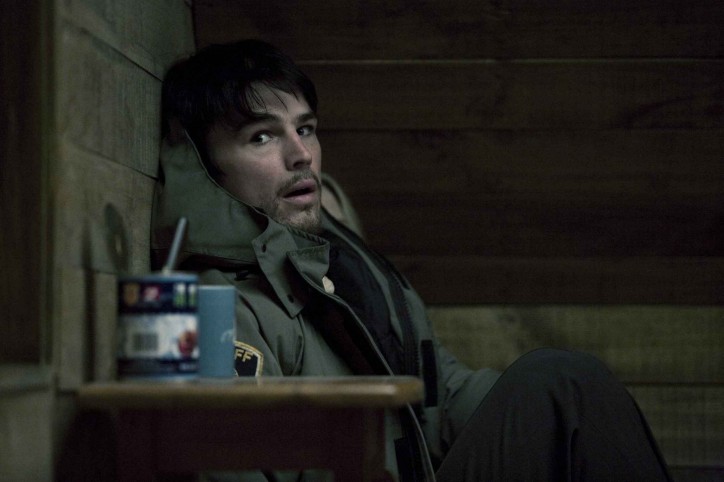 Alfred learns that farting during a scary scene really takes the tension out of it…..

Josh Hartnett gives his character, Eben, a sense of weight and believability with his square-jawed portrayal of the officer trying to keep his town together. Melissa George is suitably solid as Stella, although she never quite manages to give any emotion behind her eyes for what transpires. Ben Foster is suitably eerie, although again, he’s merely the harbinger of doom and as such, is typically obscure – his performance is resolutely impenetrable. Mark Boone Jr, who is nearly unrecognizable from his role in Batman Begins as Detective Flass (the crooked one Batman hoists up through the Narrows), has a great time chewing the scenery and stealing the show from the vamps and human meat, delivering one of the great action setpieces as he drives a trench-digger through an attacking gang of vamps in the most bloody way possible. Mark Rendall is emotionally solid as Eben’s younger brother Josh, who undergoes the most personal growth of the entire human cast, but he’s given little to do as payoff for it, sadly. 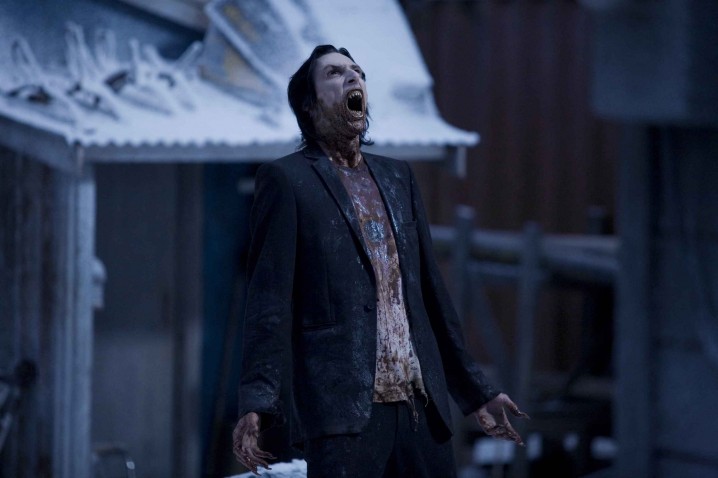 Darnit, that migraine is back again!

Problematic editing undoes a lot of the dramatic tension the film might have otherwise had. Slade, together with editor Art Jones, seem to resist showing much of the apparent extreme gore, and while this might work for the PG13 market, if you’re making a film where a vampire-kid has her head chopped off with an axe, then there’d better be gore to back up that rather horrifying plot development. Strangely, the long-shot gore is visible, but Slade eschews a lot of close-up viscera for sounds effects and a grimace on the visage of the perpetrator. 30 Days has a mixed-up mantra of what it will and won’t show, leaving the film languishing in the middle-ground of it being not bloody enough for a solidly bloody film. I’m no gore hound, but the dark, edgy visual style Slade employs, as well as the adult nature of the storyline, would seem to indicate a willingness to have a more brutal, more confronting image to display. Slade’s camerawork is… well, boring, actually. His angles seem flat, his use of shadow and light more a happy accident than a definitive choice, and the chop-socky editing style prevents the audience from figuring out what the hell is happening a lot of the time. I’m all for ramping up excitement with some shaky-cam frantic style, but often it’s overused and badly edited – it is here – when it doesn’t need to be. 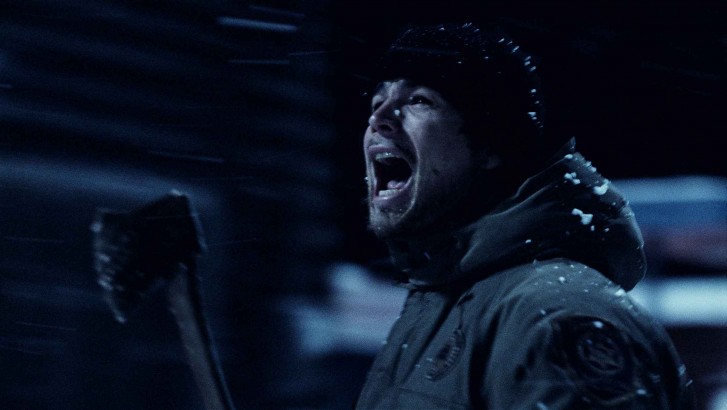 30 Days Of Night is a solid vampire film, even if it is slightly flawed (I mean, c’mon… none of those vamps ever heard a toilet flush or somebody snoring through the night while waiting 30 damn days for the sun to come up?), but the pacing and brutal kill-sequences provide at least something of a salve for any issues I had with it. I’m loathe to say it’s a great modern vampire film, but it’s a very well made, generally well acted, and certainly well produced one. I’d recommend it over and above any of the Twilight films, and look to it as a touchstone between the angst of Stephenie Meyer’s “literature” and a more brutal, angry style of vamp-flick. Solid, entertaining and commendable, definitely.