The 2013 Oscars are over for another year, and once again, we take stock of what we’ve witnessed, and round off on the films of 2012 with a salute, a hearty cheer, and a farewell for now. Now that the Academy has “rebaranded” the Academy Awards as “The Oscars” going forward, no doubt to ensure a youthful demographic remains interested (to me, you’re either interested or you’re not, and no name change is gonna fix that), we’ll have to spend some time revamping our Oscar logos on and around the site. Bummer.

So how about the ceremony itself? Well, if you followed out Facebook feed during the show, you’ll have a bit of an idea on what we thought as it progressed, but now it’s time to reflect on the entire thing collectively, given the benefit of hindsight.

Seth MacFarlane – I know many critics bashed Seth for his material, and considered him either a) too safe or b) too bland or c) both of them combined, but I found him to be easy to watch, likeable without being too smarmy, and withering in his assessment of the Kardashians. His introduction – or lack thereof – for Meryl Streep as presenter late in the evening made me sort my wine up my nose; funny stuff. Sure, he lacked the pizazz of a younger Billy Crystal, or the laconic dry wit of Whoopi Goldberg, but at least he was better than many of the “comedy” legends (Letterman, I’m looking at you) in recent memory. And he was a far safer bet than James Franco. Yeah, I liked his work. The only caveat: his opening bit with Captain kirk (cool) which wasn’t as funny as it should have been. The sock puppet redo of Flight was hilarious, however. I’m a fan of sock puppets. 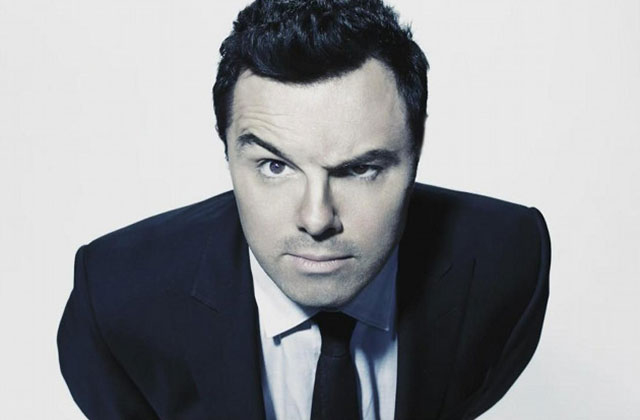 The Jaws Cutoff Music – Many bloggers hated it, but I thought it was a nice touch; the orchestra would start to play John Williams’ iconic Jaws theme motif when the acceptance speeches were running close to time. While it was only used thrice during the ceremony (and only once to completion, with those recognizing their time was up stopping well before the microphones were cut off) I felt it was a unique way to let folks know their time was up. At least it was a change from the swelling orchestral junk they normally do.

Grant Heslov’s Snipe At The Academy for Ben Affleck’s Directing Snub: It’s been the hot-button issue for film fans for a while now, the lack of a directing nomination for Ben Affleck, and Grant Heslov, one of the three producers of Argo (which won Best Picture), gave a pointed yet non-controversial snipe to the Academy for their oversight. It was always going to come, should Argo win Best Picture, although honestly I’d expected a big “thanks for nothing” middle-finger to the gathered alumni for their dissing of Afflecks work: thankfully, Heslov made the point that the Academy made a mistake, and made sure the crowd knew that he (and co-producer George Clooney) felt that the Oscar for Best Picture should also have been a Directing gong. Affleck’s part of the speech made no mention of his directing snub, and was heartfelt and humble at his film garnering so much critical praise. Classy work, gentlemen.

Shirley Bassey’s Bond Song – Shirley Bassey is one of the greatest singers ever (IMO), and her Bond themes (Goldfinger, which she performed at the ceremony, as well as Diamonds Are Forever, and Moonraker) are legendary, so to see her stride onto the Oscar stage and absolutely rip into Goldfinger live, and rip into it superbly, was magnificent. Just a shame Adele couldn’t quite do the same with Skyfall a while later.

A Lack of Presenter Awkwardness – With only one or two minor blemishes (and one major one, more on this later), the category presenters all did pretty decent jobs. Instead of the awkward shit that passes for “banter” between stars during the ceremony these days, as they try desperately to deliver some often dire segues into whatever category they’re presenting, this time the writers got it just right. And the presenters seemed to be having fun for a change, which made their “banter” a little less stilted and a lot more believable.

We Have A Tie: For only the third time in Oscar history, a tied vote meant an award for the same category was given out twice! While not in an acting category (which would have been more of a shock than it ended up being), Mark Wahlberg’s weird “oh my God” facial expression was priceless. Congrats to both lots of Sound Editors from Zero Dark Thirty and Skyfall, who shared the glory this year.

The tribute to musicals – Look, I’m a fan of musicals like the next guy, but Oscar’s infatuation with rehashing Chicago every time there was a bit of a tip-o-the-hat to musicals went a bit far. Musicals existed before Chicago, guys. Dreamgirls and Sound of Music were included to a degree, but where was Moulin Rouge? Or any of the countless musicals to come along before that? Admittedly, Catherine Zeta-Jones nailed her rendition of “All That Jazz” from Chicago, and Jennifer Hudson was obliquely dis-serviced during her Dreamgirls moment with some lackluster back-lighting and weird framing, but the fact that the telecast dropped the ball in really amping up the history of the musical genre glared like a missing sequin. The cast from Les Miserables performed solidly in their number from that film, but Adele, whose voice and powerhouse performance ability just fell flatter than squashed cardboard, was strangely lackluster with Skyfall.

The Bond Tribute: Aside from Shirley Bassey’s number, the preceding tribute to the Bond films was thoroughly underwhelming. A montage of clips, edited by what can only be described as somebody with access to MS Paint, coupled with the iconic theme, felt lazy and half-cooked.

In Memorium – Generally well done, but where were the rest of those who passed over the last 12 months? Oh, right. A link to the official Oscars website allows us to see the full listing of those who should have been up on the big screen anyway. Tacky.

Awkward Presenter Moment: Paul Rudd and Melissa McCarthy are two generally funny people (well, McCarthy is at least, I still hold Rudd in reservation as being a “comedian” of any kind) who brought their presenting category to a screeching, grinding halt. On stage to present Best Animated Feature and Animated Short, they engaged in some “witty banter” which struck me as going down like a lead balloon. I think the three or four scattered laughs were from people shifting uncomfortably in their seats. Silence at the Oscars doesn’t work so well when both presenters look like they’ve forgotten their lines.
Kristen Stewart – Who the hell invited her? Going for the youth viewer, were we? Terrible choice: Stewart looked like she’d shat out a turnip at having to be up on stage, and came across as a mixture of disinterested and disdainful, and she even managed to make Daniel Radcliffe look good by comparison. I’m not sure who (or what implement) she chose to do her hair, but that girl needs to have her management team fired, post haste.

Short film and Documentary categories – Look, I love a good short film and a great documentary as much as anyone, but were there any entries this year which had been seen by anyone actually in the Dolby Theater? Like the technical awards, which are given at a separate ceremony, I think the documentary films and short film categories should be removed from the main ceremony somehow. This would not only reduce the running time of the ceremony, but also stop wasting time of folks who have no interest in these categories. I applaud the makers of those films, but really, do they warrant a world wide audience in the billions?

Seth’s Final Song: Now, I had to try and YouTube this moment because the telecast here in Australia was abruptly cut off after the Best Picture award finished and the show cut to commercial (which in a weird way is representative of how much people would care about anything after the Big One anyway), but apparently Seth MacFarlane performed a number about all those who didn’t win an award, right at the end. Even if he’s trying to be funny, I doubt it would ever be seen that way by the folks actually in the chairs in the auditorium. A final song-n-dance routine after everyone just wants to go and get hammered? Don’t expect this mistake to be repeated in the future.

The 2013 Oscars (the 85th) weren’t horrible (I’ve definitely seen worse) and they weren’t as funny or entertaining as often as I’d have liked. The focus of the last few years seems to have been on the films and the actors themselves, keeping the bloat out and the runtime down, but this year, the excessive showboating about the Hollywood Musical and the ineptly run Bond tribute (Cubby would be highly displeased) caused the whole thing to sag and it couldn’t recover. MacFarlane wasn’t as bad as many have written (c’mon, I’d like to see some of those critics have a shot at hosting a show like this) because he couldn’t be as risque as he wanted, instead having to play things relatively safe. Some shock jokes kept the audience gasping (thank goodness) and perhaps it’s just me but the line about the only actor to get into Lincoln’s head was John Wilkes Boothe was actually pretty funny. Guess my sense of humor isn’t the same as Hollywood’s.

If the Academy folk want to make sure next year’s ceremony is a success they need to ensure a couple of things: Make sure the directors of the best films are nominated for best Director. Keep the speeches short (they are already, but keep at it!). Reduce the fluff and pomp by at least half, and ensure the Memorium segment broaches all the major stars who’ve passed, not just those somebody in a dark room thinks will suffice. And bring Seth MacFarlane back to host again, but this time, let him say and do whatever he wants. He’s not there to make people happy: he’s there to keep the show entertaining, and if you remove the very thing which makes him entertaining in the first place, why bother hiring him?