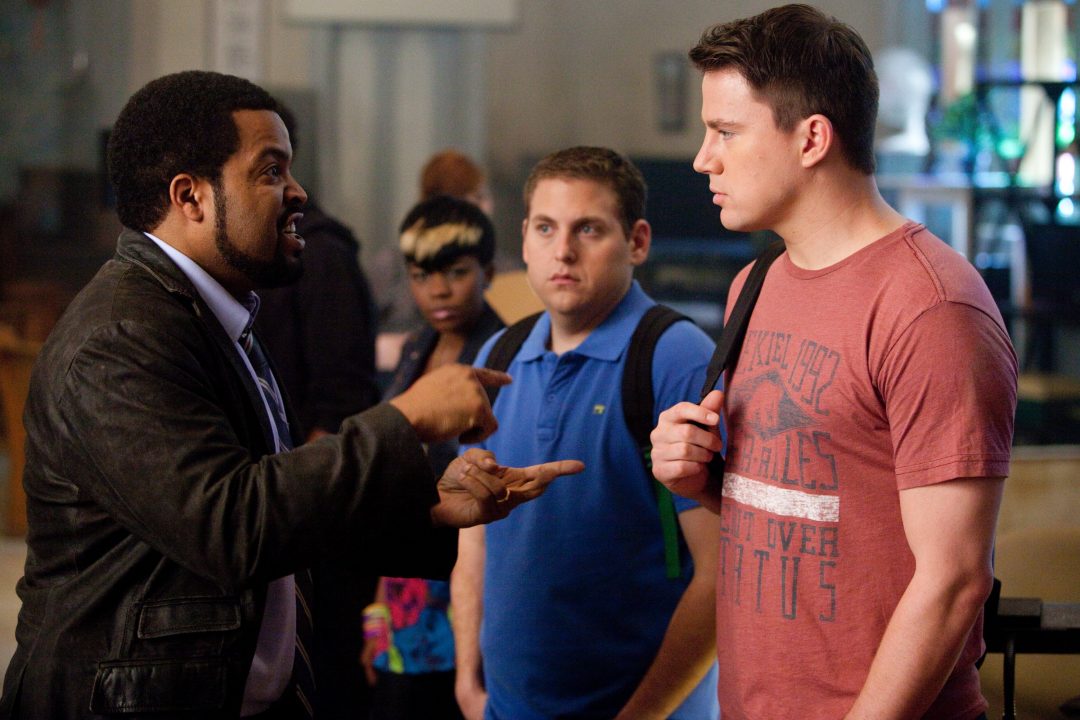 Director :  Phil Lord and Chris Miller
Year Of Release :   2012
Principal Cast :  Jonah Hill, Channing Tatum, Brie Larsen, Ice Cube, Dave Franco, Rob Riggle, Chris Parnell, Jake Johnson, Ellie Kemper.
Approx Running Time :   109 Minutes
Synopsis:  Two former schoolmates become police officers together, although after fumbling a bust they are given a special assignment – infiltrate a local high school, locate the drug dealers on campus and find the supplier.
What we think :  A complete surprise package of a film, directed with aplomb by two dudes best known for Cloudy With A Chance Of Meatballs, sees Jonah Hill in winning form alongside a considerably comedic Channing Tatum (who knew?), for this modern “update” of an 80’s classic television series. Hip-smart and filled with better performances than this had any right to, 21 Jump Street is one of the best comedies of the last couple of years. I had a ball with it.

When Kops And Kids Kollide.

I was in my early teens when the original 21 Jump Street hit Australian television screens in 1988 – it had debuted in the US a year prior – and it’s fair to say the show had a profound impact on me. It was the first time I’d been exposed to a “young adult” drama that pulled no punches (at least, that’s how I remember it) and I was blown away with what I considered to be startling performances from key leads Johnny Depp, Holly Robinson and Peter DeLuise. Looking back, it’s fair to say that with the benefit of hindsight I’d have smacked myself up the head for being overawed. When I heard that the series was being turned into a film, I was filled with the kind of dread accorded fellow television-series-to-film dreck such as The Avengers (the Uma Thurman film), Charlie’s Angels (let’s face it, the first film owned because of Bill Murray) and Fat Albert. Sure, there’d been passable attempts to rekindle old shows in cinematic format and quite a few successes, but surely the well was being dredged for smegma by the time somebody got around to 21 Jump Street. Even hearing that up-and-coming comedic superstar Jonah Hill (whom I’m completely opposed to as an actor, let me just say) was involved couldn’t even overcome my anticipatory shoulder shrug at the possibility of seeing this 80’s show being given the iPod update treatment.

Schmidt (Jonah Hill) and Jenko (Channing Tatum) are two former classmates who’ve graduated from the police academy together – Schmidt’s a nerdy type with limited physical fitness, while Jenko is the muscular jock-type with few brain cells between the ears, although through their mutual disabilities they assist each other in their goals. When they fail to make a solid bust of a drug deal, the pair are given the assignment of going undercover in district high schools to uncover illicit activities; this assignment puts them in the auspices of Captain Dickson (Ice Cube), a belligerent officer who threatens to have them kicked off the force unless they succeed. Their first assignment if to uncover a drug racket within a nearby school, to locate the supplier and stop the drugs hitting the street. Because Schmidt and Jenko look younger than they are, their ability to re-integrate into high school shouldn’t be a problem. Schmidt becomes involved romantically with schoolgirl Molly (Brie Larsen), while Jenko spends his class time fending off the advances of the Cougar physics teacher, Ms Griggs (Ellie Kemper). The school’s PE teacher, Mr Walters (Rob Riggle) has a son at the school, Eric (Dave Franco), the latter of whom is identified as the school’s distributor – the pair decide to follow him to uncover who is supplying the drugs to the school.

21 Jump Street makes no bones about what it is – hell, even the characters in the film make meta references to how stupid trying to remake old stuff new again is, which is a cool wink to the audience that “we’re on your side” – it’s a fast-paced action/comedy, with a slight lean more toward the comedy. What I really enjoyed about this film is the natural rapport between lead actors Hill and Tatum, neither of whom I normally rate highly as actors, comedic or otherwise. Hill especially grates on me, but here he’s actually kinda likable in this understated underdog persona, and he wields his natural awkwardness with skill this time around. Channing Tatum, whose performance ability I rank somewhere between a plank of wood and the box it came in, surprised me most of all here: his comic timing and ability to make himself look stupid is a refreshing change of pace from his more “serious” dramatic roles (have you seen The Eagle?) and I’m pleased to say that together, both these actors have a genuine screen chemistry together.

Brie Larsen delivers a fairly vapid turn as Schmidt’s romantic interest, although it must be said she’s hardly a pivotal character, so it’s a hard ask getting into her as a role anyway. Dave Franco, whom Wikipedia tells me is the brother of Hollywood stoner James Franco (you know, the guy who couldn’t give a shit about hosting the Oscars that year with Anne Freakin’ Hathaway) has the same winning smile as his sibling, although there’s something… off about Franco’s work here that just makes him feel creepy somehow. It worked for his character, but dang if it didn’t weird me out. Rob Riggle and Ice Cube provide more adult-centric laughs as authority figures with a variety of personality disorders, most of which involve profanity. Riggle is a scream as the school’s PE teacher, with an almost Vince Vaughn-esque quality about him that works so much better for me than the actual Vince Vaughn ever does. Ice Cube stands around and screams a lot, which is funny for a while but tends towards one-note by the end of the film; thankfully, he’s only in the film for a few minutes each way so it never becomes a major issue.

Director’s Phil Lord and Chris Miller, who’s debut feature was the animated hit Cloudy With A Chance Of Meatballs, bring their keen eye for sharp humor and timing to the screenplay (written by Michael Bacall) and really cram as many visual gags into this film than it even really needed. Much like Meatballs, which had the highest joke-per-minute ratio of any animated film I’ve ever seen, 21 Jump Street is a rapid-fire example of modern comedy thanks to a sharp script and funny casting, and even if you miss a few things along the way because your gut just busted, that’s okay, because there’s plenty more where that came from. Thankfully, there’s only a few minor slow moments in the film, where the script seems to lose its way and the comedy feels forced: in particular, a lengthy cop-vs-thug drug bust sequence early on when Hill and Tatum are on bicycles that just seems to drag and isn’t that funny compared to the rest of the film. Overall, however, you’d be hard pressed not to laugh at this entire film, because even at its silliest, it’s still played with just the right amount of sarcasm and inward stupidity that overcomes any deficiencies of pacing or humor.

21 Jump Street is a film without a care in the world. There’s an energy to it that’s missing from a lot of films of its ilk, borne out of the performances of Hill and Tatum, as well as the fun direction of Lord and Miller. Cameo appearances from original Jump Street cast are sprinkled throughout, so those of you who remember the show will be best served keeping an eye out, while the younger cast offer solid support to the leads. The humor is fun without being mean, nor is it ripe with overly sexed lewdness (thank God) or gross-out American Pie-styled baseness. This is a fresh, funny, fun update of a classic television show which easily stands alone on its own merits, while bringing an older generation of Jump Streeters into the present. 21 Jump Street is a blast. 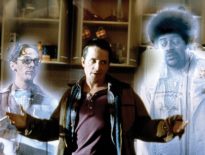 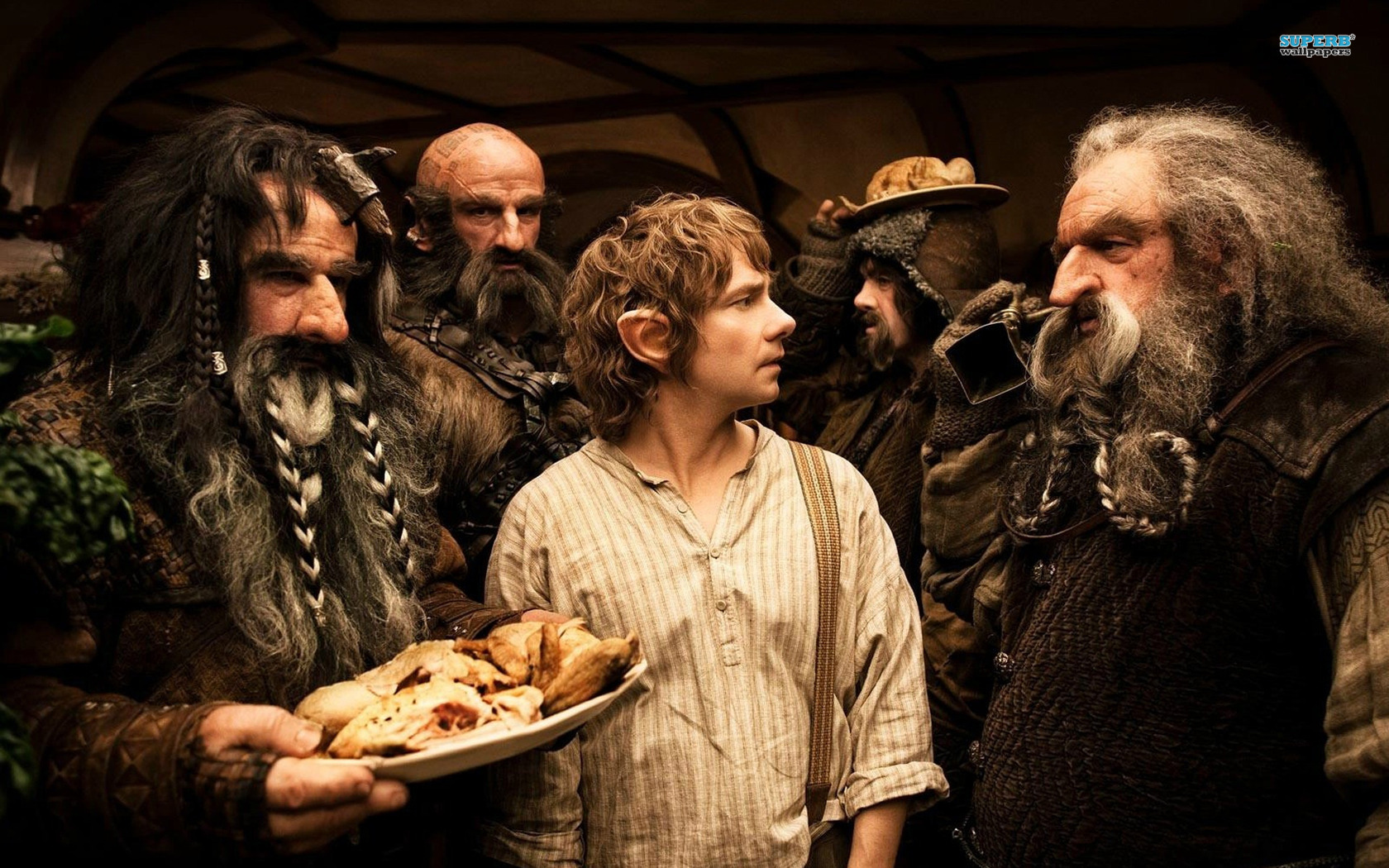