Director :  Shawn Levy
Year Of Release :   2011
Principal Cast :   Hugh Jackman, Dakota Goyo, Evangeline Lily, Anthony Mackie, Olga Fonda, Karl Yune, Kevin Durand, Hope Davis, James Rebhorn.
Approx Running Time :   130 Minutes
Synopsis:   In the not to distant future, boxing matches no longer include human beings – they star giant robots, controlled by humans. One man, former boxer Charlie Kenton, who owes several debts and loses robots in lopsided bouts, finds he now has custody of his young son after his ex-wife dies. Initially resistant to being a parent, as Charlie takes Max across the country on a robot boxing tour, they bond and learn to tolerate each other – although Max seems keen on being involved in the robot boxing scene, something Charlie thinks shouldn’t happen.
What we think :  While it’s often hampered by a cliched sporting story at its soul, the winning performances and astonishing visual effects (both digital and practical) more than compensate for deficiencies in the narrative. Jackman plays a thoroughly unlikeable character who’s this close to salvation quite well, and his chemistry with on-screen son Dakota Goyo is terrific. Their pairing makes this film work; it’s an entertaining romp with a heartfelt – if somewhat saccharine – message about… the power of love? The fact that giant robots are super cool? Check it out, and decide for yourself.

I’m an unabashed detractor of cliched sporting films – the kind where the last kick/pitch/throw/punt wins the game as the countdown clock winds into slo-motion to zero; I find them to become nearly a self-parody of sorts, because they all rely on the “last gasp” scenario that will inevitably result in the Good Guys winning against the odds. Boxing movies, aside from the recent Marky Mark effort The Fighter, are generally the last kind of film I’d actually enjoy, because I don’t find the sight of two grown men attempting to inflict brain damage on each other as a “sport” as such (don’t get me started on the “art of boxing”). I watch these kinds of films, sure, but I don’t derive the gleeful pleasure many others do in the raw human conflict they attempt to portray. Real Steel offers up another kind of boxing film – a film where humans aren’t even in the ring, so consider me impressed enough with this concept to give the film a go. Produced by Spielberg, and helmed by second-rate-comedy director Shawn Levy (Just Married, Cheaper By The Dozen, The Pink Panther remake, and Date Night), I was fully prepared to find this film a shallow, pointless exercise in effects over character; I ended up being much more impressed by just how …nice this film actually is. 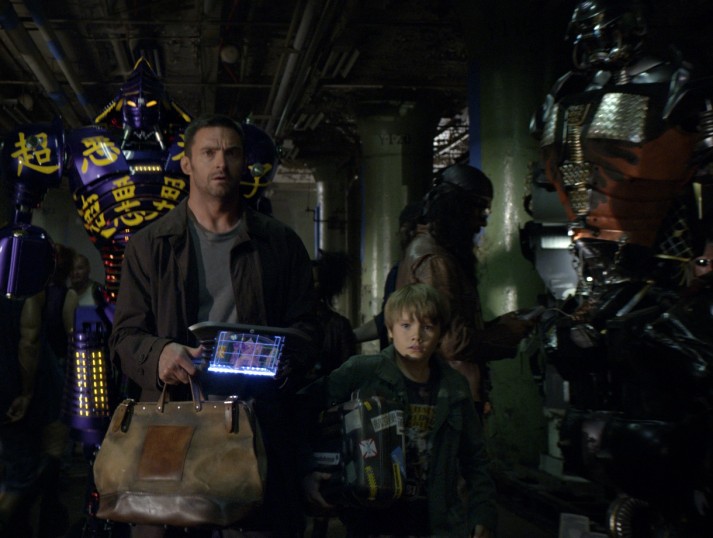 It’s the near future, and boxing has become a vastly different sport than we know it now: giant robots have replaced humans in the ring, robots controlled by humans duke it out to the adoration and glory of millions. Charlie Kenton (Hugh Jackman) is one such robot controller, plying his trade at fairs and back-alley boxing matches, with his robot Ambush. After a particularly bad loss against a raging bull, where Ambush is utterly destroyed and Charlie owes the organiser (Kevin Durand) $30,000, he takes off. His life hits an even larger speed-bump, however, when he discovers that his former wife has died, leaving him with custody of his young son, Max (Dakota Goyo). When his sister in law (Hope Davis) and her filthy rich husband (James Rebhorn) apply for sole custody of Max, Charlie is keen to sign the kid over – he wants no ties and doesn’t like the idea of being a father – until he realizes he can score some fast cash in order to purchase another robot and square his debts. Questionable ethics aside, Charlie agrees to take Max for the summer, traipsing him around the country with a robot to raise money by fighting; Max, however, is a robot boxing afficionado and fan, and when he scores himself his own robot – a sparring variant designed for the bigger robots to practice with – and actually becomes good at the sport, the pair decide to square off against the current world champion, Zeus, and his ice-cold Russian owners. 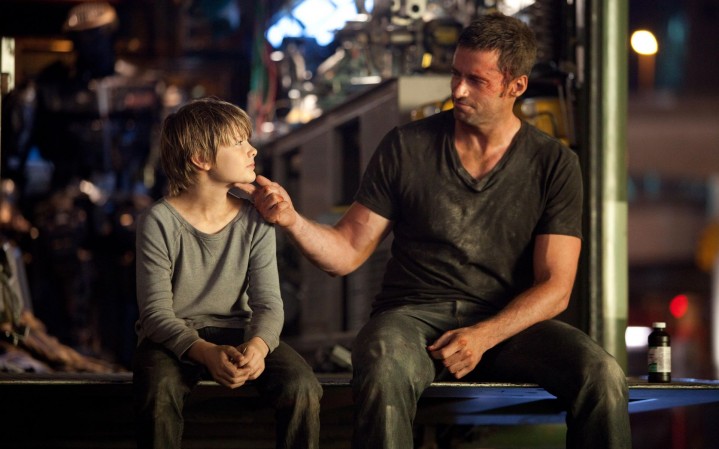 Laugh, kid, or I unleash my adamantium claws.

Real Steel has a pretty awesome concept at its core. Giant robots duking it like some kind of bizarre Rock’em’ Sock’em Robots game, with humans off to the side controlling the giant constructions like enormous Transformers. The very idea is enough to send me into raptures at the brawling carnage potential, let alone in a film starring Wolverine himself, Hugh Jackman. While the film never quite lived up to my expectations, it’s still a charming little time-waster that offers only tacit hard-core violence and a vein of sentimentality that will either gall you or produce a lump in your throat. Depends on your acceptance of hokey, cliched melodrama, I guess. Real Steel’s main problem is that it wants to be a darker, edgier film than it ends up being, thanks to the producers trying to attain that maximum-cross-section PG rating. The story, a washed up boxer lumped with a kid he didn’t ask for traipsing about the country trying to disappear into the fantasy of robot boxing, is an analogous sporting narrative we’ve seen plenty of times before (just without the boxing robots), so if you’re expecting an original story on that level you’re going to be disappointed. Jackman does enough with his character to make things interesting, and newcomer Dakota Goyo is wincingly charming and cloying all at the same time, with director Shawn Levy maximizing this pair for a winning combo of young-and-old to keep both the kids and the adults enjoying this can-see-it-coming-a-mile-away story. 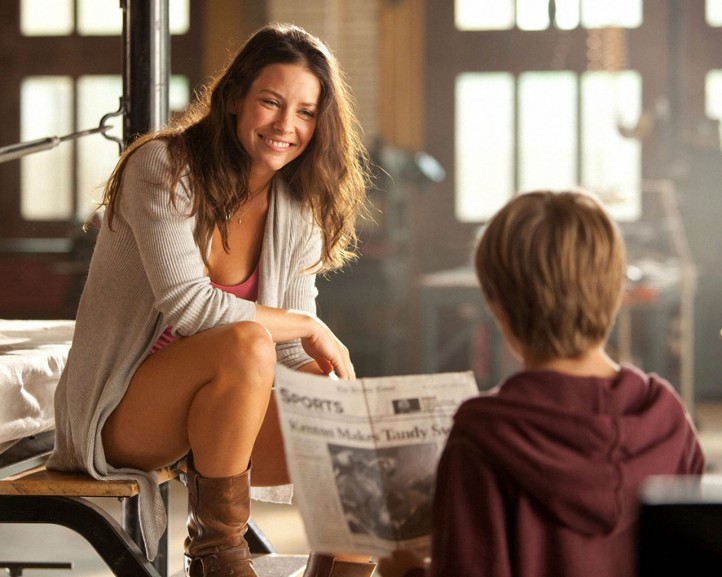 The script stumbles a fair bit in its proficiency at developing the story outside of the Charlie/Max coupling. Secondary characters, including Charlie’s on-again-off-again girlfriend Bailey (played by Evangeline Lily) have the emotional weight of a woolen scarf, with Kevin Durand hamming it up as the first half’s leering, screamingly annoying villain. The emotional content of the film is reliant more on Jackman’s performance and winning personality than what the script seems to provide, and Goyo often struggles to really hit a home run (to steal an alternative sporting metaphor) with what he’s asked to do character-wise. That said, the performances in the film really aren’t the reason you watch, if I was to be honest. The real attraction of this film is the robots, and man, they range from astonishingly cool to altogether awesome. 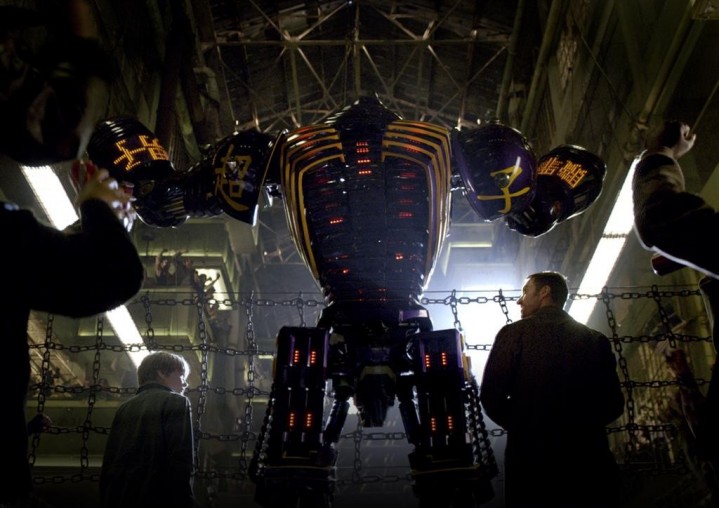 Personally, I could have done without the fluorescent backlighting…. but hey, that’s not my choice.

A mixture of practical effects and full CGI, the robots in Real Steel are the real deal – they’re entirely believable, and integrate perfectly into the setting of the film. It gets to the point where you can’t see where the real robots end and the CGI ones begin. The robot brawls, which play out like actual human boxing bouts, are chest rattling in intensity, and it’s just a wonder to watch these guys in action. If the films biggest hurdle can be overcome – the fact that the robots are supposed to fight like humans, with cries like “get up, get up” as they crash to the mat as if the robots can hear people and behave autonomously (they can’t, actually) – then you’ll really buy into the whole concept. If you’re like me, though, and find the way that the robot fights feel somewhat forced (I mean, c’mon, some of these fights are like putting a Volkswagen up against a Porche) then the suspension of disbelief may be unattainable, and as such reduce the film to merely being a bit of harmless, goofy fun. There’s a somewhat eerie sense of WWE about the whole thing, a kind of fakery to the robot brawls that the story – emotional or not as you find it – just can’t overcome. That’s not to say I didn’t enjoy them, because I did, but I think they resonated with me less because I couldn’t quite see this actually ever becoming a reality even with the most hard-core drugs in my system. 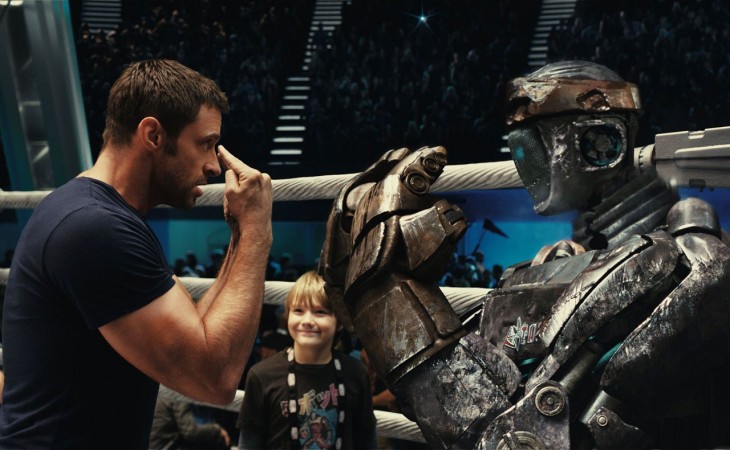 I want you to hit me right here, okay? Then I’ll never have any memory of being in this film.

Real Steel is hardly going to become a bona fide classic of the sporting genre (yes, it’s classed as a sporting movie), nor is it ever going to be a highlight of Hugh Jackman’s career. As a fluffy, harmless film with appeal mainly to kids and adults with a low threshold for sentimentality and a preponderance of doe-eyed “emotion”, Real Steel will probably be on high rotation in homes across the world simply because there’s no new Transformers films on the way. What it lacks in genuine soul or committed scripting and character development, it more than makes up for in classy, dazzling visual effects; it’s not a bad film, or even simply a good film…. I think it’s a very good film if this is your cup of tea, but for the rest of us with more discerning tastes, I can see Real Steel being watched once and then never again. The story scores a six, and the effects lift the final rating to a seven.

What others are saying about Real Steel:

Scott at Front Room Cinema found himself enjoying it: “Real Steel is made for parents, especially fathers and sons. It explores the good and bad of fatherly responsibility and parental roles. Jackman is on fairly good form, although his accent was a bit strained at times.”

Dan The Man had fun with it: “Just a two-hour long flick of Rock’em Sock’em Robots, with Wolverine.”

Sam at Duke & The Movies came out swinging: “While Real Steel may be entirely disingenuous (from its characters to plot), cobbled together with incoherency, and strung with action sequences you could only compute if watched one frame at a time… Yeah, sorry, I got nothing.”

Stevee at Cinematic Paradox liked it: “Hey hey, here’s a movie which I actually liked!”

Max at Impassioned Cinema found he enjoyed it more than he thought he would: “Real Steel did surprise me in a sense. I thought for sure the movie would be unforgivably terrible. Hugh Jackman is fine in the film, he plays the titular role of asshole quite well. If your looking for a special effects laden, Rocky spectacle, you could do far worse than Real Steel.”

Lesya at Eternity of Dream loved it: “Shawn Levy’s ‘Real Steel’, a knockout summery action thrill, and its star Hugh Jackman easily play off critics against each other, being a sentimental but still entertaining adventure.”

What did you think of Real Steel? Love it, or loathe it? Let us know in the comments below!!