Director :  John Erick Dowdle
Year Of Release :  2010
Principal Cast :  Chris Messina, Bojana Novakovic, Bokeem Woodbine, Logan Marshall-Green, Jenny O’Hara, Geoffrey Arend, Jacob Vargas, Matt Craven, Joshua Pearce.
Approx Running Time :  80 Minutes
Synopsis:  Five seemingly ordinary people become trapped in an elevator. as time passes, and one by one they begin to die, tensions rise and blame shifts throughout the tiny, confined space. Watching on, police and security staff can only try desperately to get to the trapped occupants before more are killed. Trouble is, one of the people in the elevator car is the Devil.
What we think :  What begins as an effective supernatural thriller ends up being an effective supernatural thriller. Devil, as its name might imply, is a film filled with lightness and fairy dust, the kind of film small children and the elderly might enjoy on a Sunday afternoon. Okay, seriously, Devil is a low budget yet pretty effective theological chiller, the kind of film I wish End of Days had been instead of the miasma it was. Devil may baulk at being intelligent, and it may feel like it’s kinda been around the block a few times, but the concept is interesting and the execution is better than I expected.

The first film in M Night Shyamalan’s projected Night Chronicles Trilogy, Devil is a sharply directed, occasionally scary, always effective chiller from the director of the equally impressive Quarantine. The premise is simple, really, and lends itself to John Erick Dowdle’s experience with close-quarters film-making, although if you have seen Quarantine, there’s a difference between being trapped in an apartment building and an elevator. An elevator has a greater chance of being more claustrophobic. Devil uses this natural fear of enclosed, tiny spaces, and ramps up the tension by throwing Satan himself into the mix. At the outset, this might seem a tad ambitious, but Dowdle eloquently handles the twists and nuances to make a reasonably effective thriller. It’s a face against time mixed with a test of faith, mixed in with an out-and-out scare fest. The Devil works best in the dark, so when the lights go out, the chills go up. 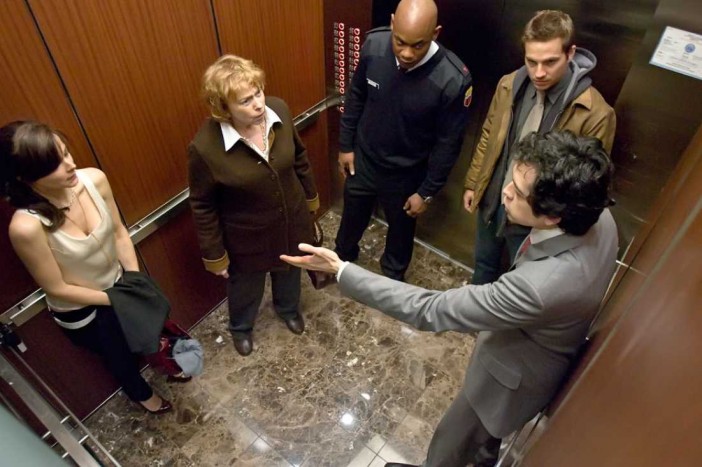 No, I swear, the one who smelled it, dealt it!

Detective Bowden (Chris Messina) is a recovering alcoholic assigned to a suicide case. After discovering that the jumper leaped from the higher floors of a massive office tower, things take a dramatic turn when he learns that five people have become trapped inside an elevator in the very same building. A security guard (Bokeem Woodbine), an old woman (Jane O’Hara), a young woman (Bojana Novakovic), a salesman (Geoffrey Arend) and a mechanic (Logan Marshall-Green), none of whom know the others. With the elevator trapped in the shaft, the power and lights flickering on and off, they bicker amongst themselves before the dark descends and one of them lies dead. The lights come back on, and as the security monitors play out the scene – to the horror of Bowden, his partner and the building’s security personnel – gradually, each of the occupants of the elevator meets a gruesome demise. One of the security men, Ramirez (Jacob Vargas) recognizes this scene as a Devil’s Meeting, thought to occur when Satan wants to take souls down into Hell; according to the legend, a Devil’s Meeting confines people to small locations so Satan can torture and torment them, and in the end – everybody dies. Bowden at first refuses to accept this, although his faith is shaky due to a previous family tragedy – his wife and young son were killed in a hit-run incident years earlier, and the driver was never located. He has little time for religion of any kind, and refuses to accept that the Devil (and therefore God) exists. But as the day wears on, and more people end up dying, Bowden must face the fact that he may not save everyone in the elevator. 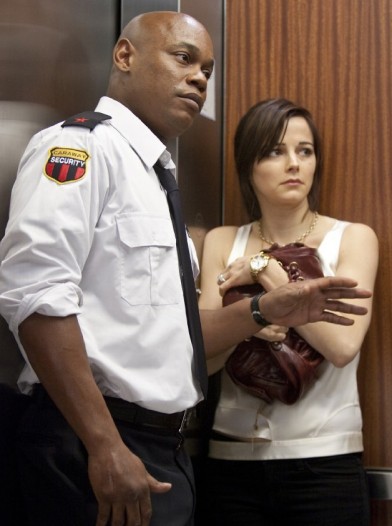 If somebody had come to me and said “I have this idea for a film. Let’s put Satan in an elevator with a bunch of people, and see what happens. Oh, and the elevator is stuck between floors, with no way out.”, I’d have laughed in their faces and told them to keep walking. The idea of having one of religions most iconic figures of evil stuck in an elevator is too idiotic to really comprehend – after all, if he’s the Devil, why would he bother with an elevator, right? Well, thankfully, I wasn’t a producer with this script sitting in front of me, because as it turns out, Devil is a decent enough film that uses this very concept. It’s the kind of film I’d have thought somebody like David Fincher might have enjoyed making, were he behind this, because this kind of close-quarters style is right up his alley. Have you seen Panic Room? John Dowdle handles the suspense of this scenario well, using almost all the cinematic tricks in the book to keep the audience guessing as to a) what the hell is going on, and b) who’s going to die next. He succeeds to a point, although Devil does have its fair share of issues. I’ll get to those in a moment. 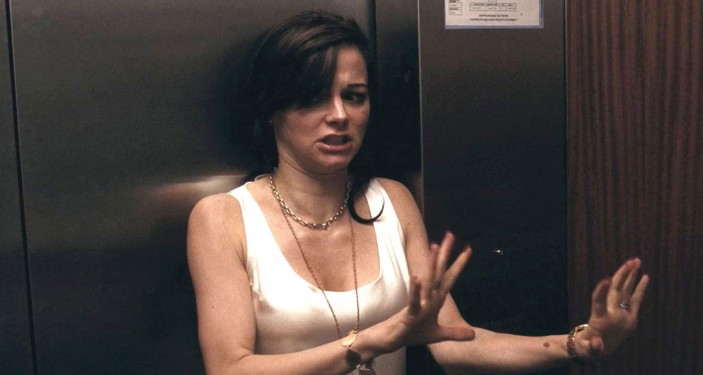 Not a happy camper.

The cast are excellent here, with what is a fairly B-grade script, involving characters who aren’t always as they seem (with the exception of Bowden) and who have to look frightened or confused a whole heap of the time. Bokeem Woodbine plays a jittery security guard in the elevator, and his ability to convey the frustration and restrained rage is superb. Logan Marshall-Green is equally up to portraying the mechanic, another of the three guys stuck in the elevator, and he has plenty to deliver emotionally before this film ends. The old lady, played by Jane O’Hara is as creepy as old ladies can be, because she’s not quite right either – heck, all the players in this elevator are in some way a little off, while Bowden is the most straight up of all the characters. Chris Messina delivers a solid performance as the fractured detective, giving what is really a nothing role some genuine heart and soul, as well as a no-fear attitude that puts him in the firing line for the Devil himself. 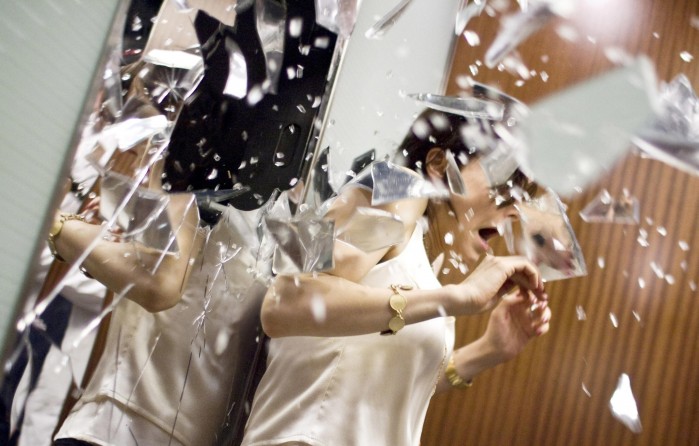 Where the film falls down is with the script, which is hampered by a dearth of quality character moments, instead relying on genre cliches and shorthand to deliver the information we need. And it also commits a major faux par as far as I’m concerned – the continual voice-over, with Ramirez retelling the story of a Devils Meeting and what happens there, is obviously intended as a foreshadowing of events to follow, but all it does is give away what’s going to happen next. Every time his voice starts in on the narration, the camera cuts to the next person about to meet some untimely, horrific death. Some of it is relevant, and some is not, but the creative choice for Ramirez to explain what’s happening in voice-over form was one that undermines the tension of the film from an audience perspective. And why they decided to go with a supporting character narrating it, instead of one of the main characters, is equally as baffling. Ramirez brings nothing to the film as a character, save to become the religious font of knowledge for the story. It’s a confounding decision, and one which works against the tension of the movie. 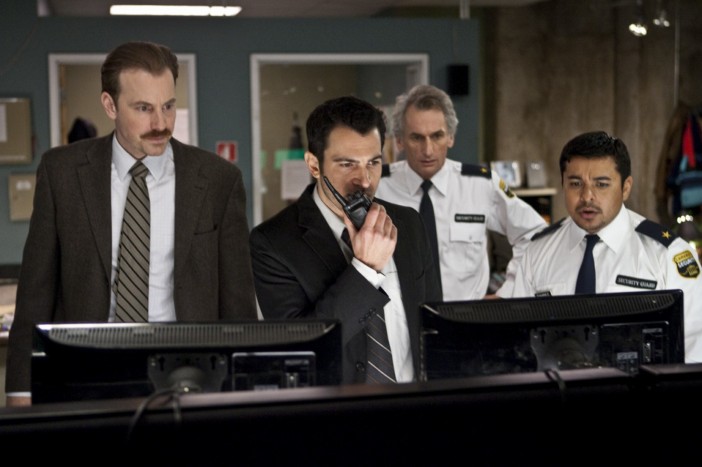 Aside from these issues, Devil is a decent enough genre entry to be worth a look. It’s nothing new, nor is it anything particularly special, but what it does do is chill the blood occasionally and keep you guessing (actually, that’s a real strong point to the film, it does keep you guessing) which is all you can ask for, really. It’s occasionally tense, often genuinely spooky (more often as a result of some excellent sound design) and while the downbeat ending is pretty ordinary, overall it’s a lot better than some of the other rubbish out there pretending to be scary. The Unborn, anybody? Give Devil a shot, you may find yourself surprised at just how good it ended up being.