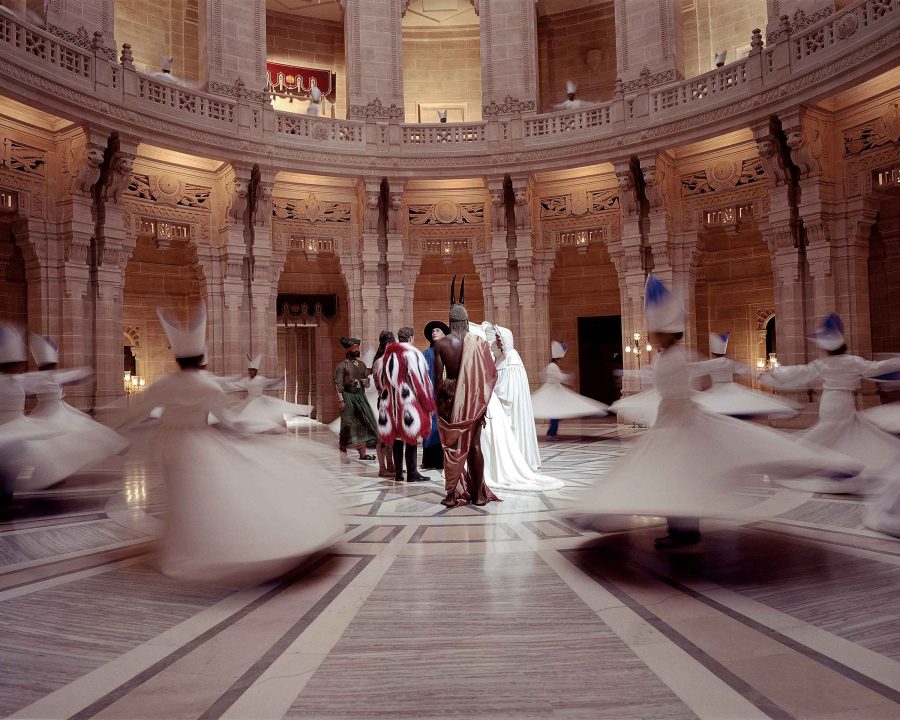 Director :  Tarsem (Singh)
Year Of Release :  2008  (Completed in 2006)
Principal Cast : Lee Pace, Catinca Untaru, Justine Waddell, Daniel Caltagirone, Robin Smith, Marcus Wesley, Leo Bill, Jeetu Verma, Kim Uylenbroek, Julian Bleach.
Approx Running Time :  117 Minutes
Synopsis:  While recuperating in a Los Angeles hospital, a young girl befriends a movie stuntman who is also recuperating after a nasty fall, and he tells her a story using the people from the staff and patients in the infirmary around them.
What we think :  Visually, one of the most astonishing films I’ve ever seen. Breathtaking cinematography almost threatens to overpower the elegant fantasy story, interwoven with a somewhat dark reality in which the girl and her stuntman friend live. The performance by then-6 year old Catinca Untaru is gorgeous, even if the spontaneous dialogue feels a little amateurish, and if for no other reason than to see Tarsem’s magnificent visual style in action, The Fall is essential viewing.

How could a film like this exist and not receive praise for its simply stunning visual palette? The Fall, which was completed in 2006 but only released worldwide in 2008, is directed by Indian helmer Tarsem Singh, who uses only his first name on his most recent projects. His debut feature, 2000’s The Cell, which featured Jennifer Lopez Vince Vaughn and Vincent D’Onofrio, was a bedazzling affair of imagery mixed with a rather creepy experiment in dream realization, and to this day remains one of Lopez’s most absorbing forays into film. Tarsem’s next film was this, some six years later, The Fall. The sheer breadth of scale and scope in this film, and the obvious use of substantial location filming across entire continents, is perhaps the most astonishing part of this entire film – the story isn’t Gone With The Wind, but the fantastical nature of the plot, and the desire to capture everything as much in-camera as possible, meant that green-screen was out of the question a fair part of the time. To say The Fall is a beautiful film is like saying the Sistine Chapel has some rough sketches on it. There’s nary a frame of this film that is not a true work of art – Tarsem’s command of cinema is undisputed, his use of lighting, framing and deep focus is spectacularly highlighted here, much like the magic he worked with in The Cell. And yet, as I often say, story is key, not the pretty pictures. Without a good story, any film simply falls apart, no matter how gorgeous the cast and locale. So is The Fall all style and no substance? Is it just so much window dressing without form?

In 1920’s Los Angeles, a film stuntman, Roy (Lee Pace) lies crippled in a hospital bed, after injuring himself while working on a new feature. A fellow patient, a young girl sporting a recently broken arm named Alexandria (Catinca Untaru) befriends him by illicitly obtaining morphine – drugs which Roy intends to use to commit suicide, knowing he will never work in stunts again. In order to gain her trust and loyalty, Roy spins Alexandria a fantastic tale of a group of men traveling across a mysterious land to kill Count Odious (Daniel Caltagirone), who has in one form or another caused them suffering. Roy takes on the key role of the Black Bandit, while his party includes freed slave Otta Benga (Marcus Wesley), explosives expert Luigi (Robin Smith), the Indian (Jeetu Verma), Alexander The Great (Kim Uylenbroek), Charles Darwin (Leo Bill) and his monkey, and a mysterious mystic (Julian Bleach). As they journey towards the city, and the palace of the Count, they encounter a number of bizarre sights amongst their battles with Odious’s forces, with the Black Bandit falling desperately in love with the beautiful Sister Evelyn (Justine Waddell), who is engaged to their sworn enemy. As Roy slowly succumbs to his depression, and becomes increasingly more delirious with the overuse of morphine, his story becomes more and more dark, with Alexandria herself left to save Roy, the Black Bandit from his own demise.

Loved it, loved it, loved it. The Fall has issues, namely pacing and a desire for style above all else, but there’s no denying, this is a terrific film to watch. This is pure eye candy at its most powerful, setting people up in the most massive of locations and throwing sword fights and gun-battles across the screen every few minutes. The use of the framing technique, with Roy relating his epic story to Alexandria in hospital, takes a while to get going, but one it does, becomes the most interesting part of the film. Roy’s suicidal tendencies are prominent in The Fall, although I can’t understand why they needed to be. The juxtaposition of this mans descent into depression between the glorious fantasy fable he weaves for the young girl is jarring, perhaps too much so, a sense of melancholy or soft-core bile within what is at the heart of it, a wonderful story of passion and romance. The story Roy tells is melodrama at its highest form, filled with eye-widening derring do, mystery, and magic.

Alexandria’s ingenue-like wonderment at this tall tale is the most central part of the film, and the young Untaru delivers the cutesy-pie with extra garnish. She’s cute as a button, this one, although her acting ranges from credible to pre-school recital level. You can see her acting her heart out, yet as with most child actors, their performances often range from amateur to daytime soap. Lee Pace delivers a serviceable performance as Roy, but it’s as the Black Bandit that he really shines, milking the fairy-story ethos for all its worth. His square jaw, deep eyes and dark complexion make him a “rugged” character to be the story’s hero, while ancillary characters from the hospital also double as members of the Bandit’s renegade band. Leo Bill gets a laugh or two as Charles Darwin (not sure why Darwin needed to be in this story, but I think it was more to ensure somebody with a scientific background was in the group to balance out all the testosterone!) and Justine Waddell looks suitably amazing in her stunning costumes as Sister Evelyn. The performances of the secondary cast range from acceptable to decent, and although nobody’s called upon to really go all out in terms of performance, the film isn’t any lesser for wont of quality acting.

I’ve raved a little already about the visual style of this film, and how breathtaking it is, and if I could spare a moment longer I’d like to gush more heaving praise upon it. Cinematographer Colin Watkinson has been given access to some of the worlds most stunning architecture and natural landscapes to tell this story, and he’s used them perhaps better than anybody I’ve been witness to in living memory. For a moment, just a moment, I was struck by the awesome beauty of this film and considered that it might all be a load of CGI, a lot of set-extensions thanks to green-screen – but it isn’t. The locations used in this film exist. They truly do, and Tarsem shoots them like a boss. Framing symmetry at every opportunity, using deep focus and oblique angles, as well as tracking and dolly shots in ways that make every scene sing, The Fall is quite simply one of the most breathtakingly beautiful films I’ve seen in years. Keen eyed observers may find the similarity between some of the material in this film and that of Ron Frike’s Baraka a little weird at first (there’s a scene with a tribe of muddied up men wiggling themselves in unison towards a focal point that is lifted directly from that 1992 opus, as is the use of the spectacular whirling dervishes towards the latter part of The Fall) but these moments are few and far between, and have no negative impact on the movie overall. If for no other reason than to see this films stunning cinematography, you need to witness The Fall.

My only real negative comment about The Fall, and I’ve already intimated at it previously, is the rather dark nature of the hospital framing sequence. It’s shot in muted tones to further accentuate the brilliance of hue in the “story” sequences, but the characters in these scenes feel out of balance with the rest of the film. Lee Pace’s portrayal of Roy is hampered by an insistence that he try and kill himself, and the reasoning for this is obscure at best – perhaps had he had more to lose, we might have felt more compassion towards him; as it is, he’s just a selfish douche trying to escape the easy way. Tarsem mixes up his use of the secondary characters, most of whom get hero moments in the “Story” sequences, although in the hospital framing scenes they’re little more than extras. According to Tarsem, a lot of the dialogue between Pace and Untaru is ad-libbed, with only the vaguest of directions to take things, and if there’s a fault to be found with The Fall, this is another.

Overall though, I found The Fall to be an utterly captivating, elegant and ravishing feast for the eyes and ears (the score is primarily motif’s based on the 2nd Movement of Beethoven’s 7th Symphony, and it sounds wonderful) and can easily recommend it to anybody looking for an alternative to Michael Bay blowing up the world again. While the story itself is hit-and-miss for the majority, I’d wager, the sheer beauty of this film shines through in every frame, and if you didn’t see this film at least once, you’d be missing out. Highly, highly recommended.