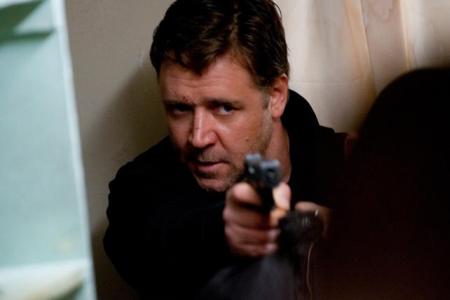 Director :  Paul Haggis
Year Of Release :  2010
Principal Cast : Russell Crowe, Elizabeth Banks, Brian Dennehey, Olivia Wilde, Ty Simkins, Lennie James, Daniel Stern.
Approx Running Time :  133 Minutes
Synopsis:  When his wife is imprisoned for a crime she may or may not have committed, in desperation, a man plots a daring escape with both her and their young son.
What we think :  Russell Crowe is solid in this plodding, unremarkable and entirely wasted opportunity, The Next Three Days. The story moves at a glacial pace, the expected tension with any “prison break” film never eventuates save for a few minor moments in the middle, and the characters remain distant and cold to the viewer even after the 2 hour-plus running time. Crowe commands the screen like he always does, but the film never rises to the potential the source material – a 2008 French film – inspired it to do.

Oh, how I lament the day we lost actual creativity in Hollywood. The long-gone days when screenplays weren’t merely rehashings of lesser known foreign language films, revamped for an American audience seemingly too petrified to read subtitles to watch quality stories in a different language. The Next Three Days is one of those films: a remake, and a poor one at that. You can’t blame Hollywood for trying though; after all, the success rate for remaking foreign films has been better than patchy, and a lot worse than superb. And those are good odds. So we come to this, a bloated, lamentably frustrating affair running just over two hours, based on a French film which ran for about 90 minutes. How you can hope to expand a similar narrative by the same time again and not lose the inherent momentum of the story, I don’t know, but director Paul Haggis’ brave experiment to try it has met with what can only be described as a Sunday afternoon failure.

Returning home from a dinner one evening, John Brennan (Russell Crowe) and his wife Lara (Elizabeth Banks) have their lives interrupted when police arrive and arrest her for murder. Three years later, John is still pursuing appeal after appeal, with Lara having been found guilty of the crime and sentenced to a significant prison term. Their son, Luke (Ty Simpkins) is growing up knowing only that his mother is in prison; after their last appeal is refused, John decides to break Lara out of prison and make a run for it. He slowly begins to plan the escape, from obtaining passports and documents for international travel, to weapons, and what to do with their young son once they are on the run. Once the plan swings into action, the police, led by Lieutenant Nabulsi (Lennie James), pursue them through Pittsburgh, blocking John’s escape at every turn – or so they think.

You know you’re in for a rough ride when the remake of a film is longer by nearly half again than the original – Anything For Her was directed by Fred Cavayé and released in France in 2008, and it’s this film that The Next Three Days lifts its story from. And by lifts, I mean steals. Outright. However, Haggis seemed intent on boring the audience to death with a lengthier, more languidly paced affair that does away with things like tension and thrills, and gives us Russell Crowe behaving like a person who’s never ever seen a prison break film. John Brennan isn’t an idiot, he’s a lecturer at a Pittsburgh college, so you’d think he’d have a better command of his intellect when dealing with trying to break his wife out of prison. Sure, we know he’s not a former Navy Seal or espionage agent (like Liam Neeson was in Taken), so we can assume he’s going to screw a few things up, but this film spends waaay too long getting to the point with this aspect. John’s learning to deal with the underbelly of the Pittsburgh crime world is a prominent part of the film, as his desperation begins to rise the closer his wife comes to being transferred away to a more secure prison. And with this prominence comes a lack of restraint on the behalf of Haggis – the film ponderously drags in a bunch of second-tier characters and events that serve little end-game purpose to the narrative, and little purpose to the growth of Brennan as a character. The film should move along swiftly, since it is inherently a thriller of sorts, it’s just that it’s not very thrilling in actuality.

Where the problem of pacing seems to stem from is both the script – which attempts to draw more characterization from these people than they probably deserved (and it fails to do so with any genuine result) – and Haggis’s inability to cut out scenes and story points which don’t matter as much as this film seems to think they do. Every subtle nuance of the plan, from John’s encounter with a former escapee, to the execution of the plan two-thirds of the way through the film, is examined with exhaustive detail, almost as if Haggis is afraid we might not understand what’s going on should he leave something out, and it forces the films run-time to extend to ass numbing proportions. It struck me while watching the end credits that through the entire film, there was no use of the most cliched (but most underrated) cinematic device known to man – the montage. Had Haggis used a montage to deliver shorthand versions of much of the planning of this escape, the films lethargic pacing could have been improved substantially. I hate to say it, but Trey Parker and Matt Stone were probably right. When you need to show things changing rapidly, you need a montage.

On the performance side of things, Russell Crowe delivers the requisite rage, frustration and subtle resolve his character needs to display when the chips are down. His character is driven, although I didn’t connect with him as a viewer as I hoped to, in order to really embrace his predicament. This isn’t a slight on Crowe, though; it’s more an indictment on the weaknesses of the script. Elizabeth Banks offers a fragility and innocence as Lara, who may or may not have committed the act she’s in prison for (don’t worry, we find out in the end…) and while her character isn’t really strong enough to elicit a response from this viewer, it did what was needed to hook John’s mission to rescue her, into the reality of the film. Olivia Wilde is utterly wasted as a friend to John, and mother to one of Luke’s classmates, while Brian Dennehy is also wasted in a bit-role of John’s father. Lennie James, who comes into this film in the final act as the Detective chasing John down through the city, does his best impression of a grizzled, Tommy-Lee-Jones-clone cop from countless other films, and although it’s a nothing role, he’s good in it.

Ultimately, I think remakes are merely an echo of true originality – they generally show a complete lack of respect for the films they steal from, and while a few may actually be pretty good (Quarantine, The Ring, as examples) the vast majority are lesser variations on the theme. The Next Three Days does little to staunch the influx of middling, unnecessary retoolings of great foreign films made to shore up the dearth of new material from the Hollywood screenplay pool. It’s slow going, this film, and quite a laborious procedure to get through for a fairly limp-wristed conclusion (Do they escape? By the end of this, you probably won’t care either way…) and I don’t really think it’s worth the effort. Haggis has trouble mixing his character development and the expectations to produce a tense, exciting thrill ride, and while he manages to eke out a minor amount of angry, the tepid scripting and lackadaisical pacing make for a pretty turgid affair. Yeah, this film feels like it lasts for the next three days.

What Others Are Saying About The Next Three Days:

Rory over at Above The Line gives us his thoughts: “The premise is weak boned, unable to advance beyond the baby steps of a heist film where the loot, as we’re told, is the righting of the wrongly incarcerated young mother and wife for murder.  This fact alone is the driving force of the film, the belabored starting place that feels too certain a finishing place for its own good.”

5 thoughts on “Movie Review – Next Three Days, The”