Director : Seth Gordon
Year Of Release : 2011
Principal Cast : Jason Bateman, Jennifer Aniston, Charlie Day, Jason Sudeikis, Kevin Spacey, Jamie Foxx, Colin Farrell, Julie Bowen, Ioan Gruffudd.
Approx Running Time : 98 Minutes
Synopsis: Three guys who hate their respective bosses hatch a plot to kill them off, if only they could manage it through their sheer incompetence.
What we think : Actually, this isn’t a bad film: it’s funny, has some winning performances from the entire cast (which is rare in a comedy film) and is razor sharp in the timing department. Slick, sure and very very black, Horrible Bosses is as good an adult-comedy from Hollywood as I’ve seen in ages.

We all have bosses that we’d like to see slip off the face of the planet, invariably with a bullet or blade between the ribs, right? The Boss From Hell, the guy or girl in your workplace who makes you seethe and grumble through each workday, putting their petty personal issues before your prescient professional ones. Bosses who deserve their comeuppance, right? Of course we all have, at some point or another. So what if you actually decided to go through with killing them? Then Horrible Bosses might be what you’d get. The British perfected the black comedy genre, and Hollywood has subverted it in recent years, so a film like Horrible Bosses could have trod the well-worn path of a Seth Rogen film or a Judd Apatow “comedy” (really, really, I’m not a fan of any of their films) and been merely another “adult” comedy featuring boobs, bodily functions and ribald language. This film has all that, and a bit more, and yet it manages to feel more like a British farce than a typical black comedy – a feat I thought impossible until now. Horrible Bosses is actually quite amusing! Color me surprised! 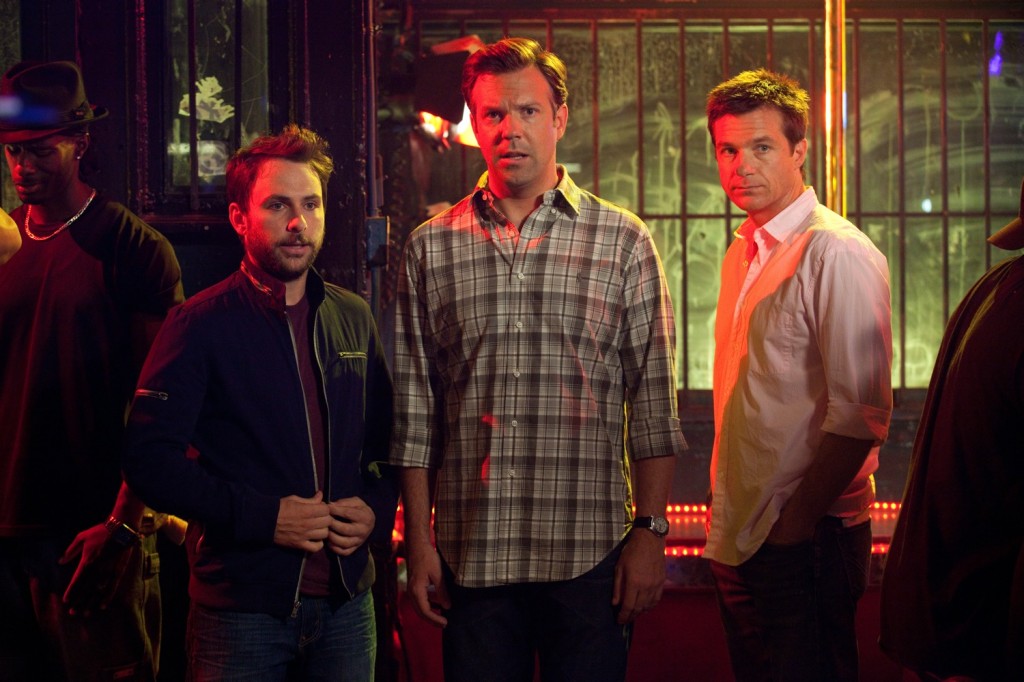 The wolfpack is back…… wait…. is this The Hangover 3?

Nick (Jason Bateman), Dale (Charlie Day) and Kurt (Jason Sudeikis) work for people they hate – Nick’s boss, Dave Harken (Kevin Spacey) is a power-mad psychopath, emotionally crippling and cruel, while Dale’s female boss, dentist Julia Harris (Jennifer Aniston) is trying to get him into bed using all manner of completely unsubtle workplace harrassment techniques; Kurt has a different problem – his lovely old boss (Donald Sutherland) has passed away and the son, Bobby (Colin Farrell) is a heroine-snorting immoral douchebag left in charge of the family business. After a variety of embarrassing, horrendous encounters with their respective bosses, the trio decide to get even by actually killing their nemesii – if only they knew how. Seeking help from the criminal underworld, they encounter one such person in the form of Motherf***er Jones (Jamie Foxx), who acts as their enabler in this mission. As they plot to off their bosses, events transpire that see them followed by police, engaging in bizarre sexual encounters, breaking and entering, and discovering that murder isn’t always the easiest thing to get away with. 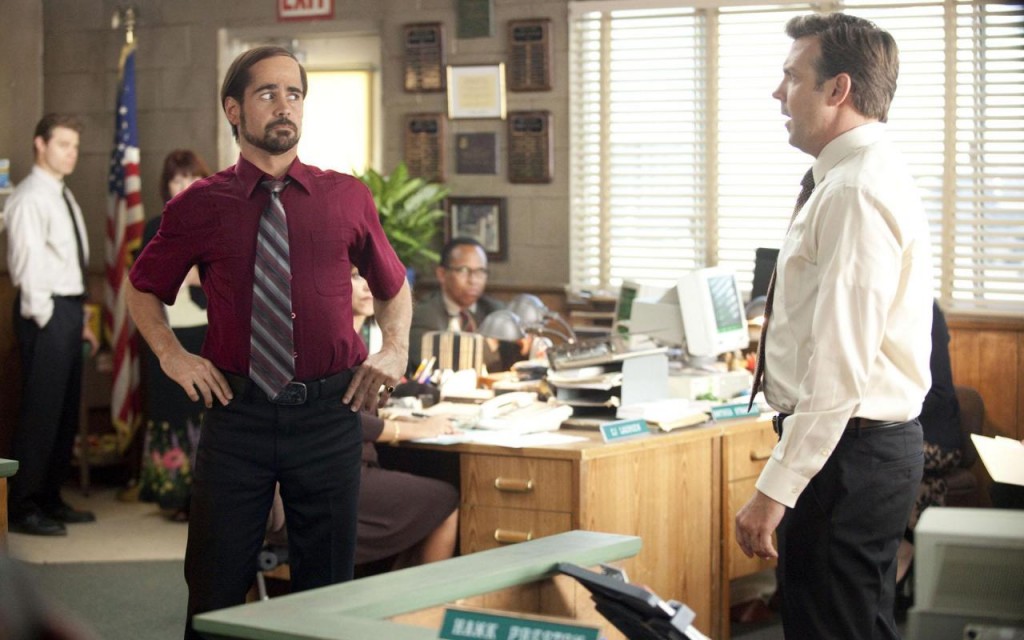 I know, I know, you’re the boss, man. But do you have to be such a douche?

What a blast I had with this! Horrible Bosses is damn funny, and considering my thoughts on Knocked Up, The Hangover and other films of this ilk, that’s amazing to me. Yes, I hated The Hangover, didn’t find Superbad very amusing, nor did I think much of Knocked Up, as all three films relied on crass language and bodily fluid jokes to get themselves through to the audience. Horrible Bosses is less about gross-out humor and lowbrow comedy and more about three average guys being put into extraordinary situations. I think the film’s fun factor came out of the performances from the three leads (and a jaw-dropping turn from Jennifer Aniston), all of whom give their respective characters the engaging personalities to make this story fly. Bateman, as Nick, is probably the most ordinary of the trio, and his ability to convey resigned, spiritless depression is sublime – Nick’s boss, played with effortless cruelty by Kevin Spacey, is the films major villain, a suitable foil for the hapless Nick and his mates. Charlie Day, as Dale, the dental assistant to Jennifer Aniston’s sexually aggressive character, seems to be channelling Steve Carell, both in look and style of acting; that’s not a bad thing, but I kept thinking of Carell while watching this, a distraction I don’t quite know how Day will overcome in future roles. Jason Sudeikis, as Charlie, also seems to be stealing his performance from another actor – Ed Helms from The Hangover. Sudeikis plays the “straight up guy”, the most mature of the group and the one who stands to lose the least should it all go pear shaped. Nick and Dale will lose everything if their bosses remain in place, while Charlie stands to lose only his position within the company he works for. 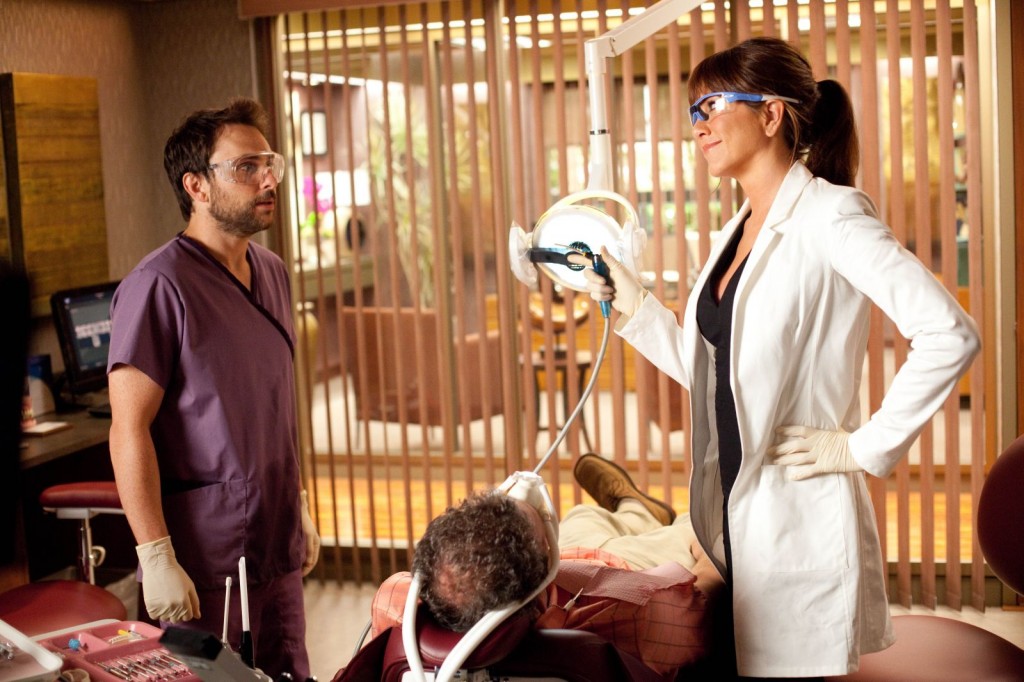 As mentioned, Kevin Spacey has a delicious time as the devious, cruel and violent Dave Harken, quite possibly the most realistic horrible boss of the three presented here. While Jennifer Aniston’s sexually amorous character and Colin Farrell’s completely over-the-top coke-head character are certainly amoral and (hilarious) suitably bad, Spacey’s character is the one that could happen. He’s emotionally crippling towards Nick, the kind of boss you can’t do much about or to, and there’s nothing more we’d like to do that smack him in the mouth. It’s a testament to Spacey’s ability as an actor to be able to portray a person to devoid of emotion, so lacking in innate humanity without becoming a caricature like Aniston and Farrell. Also worth a mention is Jamie Foxx, who is hilarious as Mother f***er Jones, a bar-dwelling reprobate of questionable morals who helps the boys come up with their plan. Foxx smacks the role out of the park, even though the role ran the risk of being a 2-dimensional part. Keep an eye out for Modern Family star Julie Bowen’s small role as Harken’s slutty wife – she’s also hilarious and playing against type. 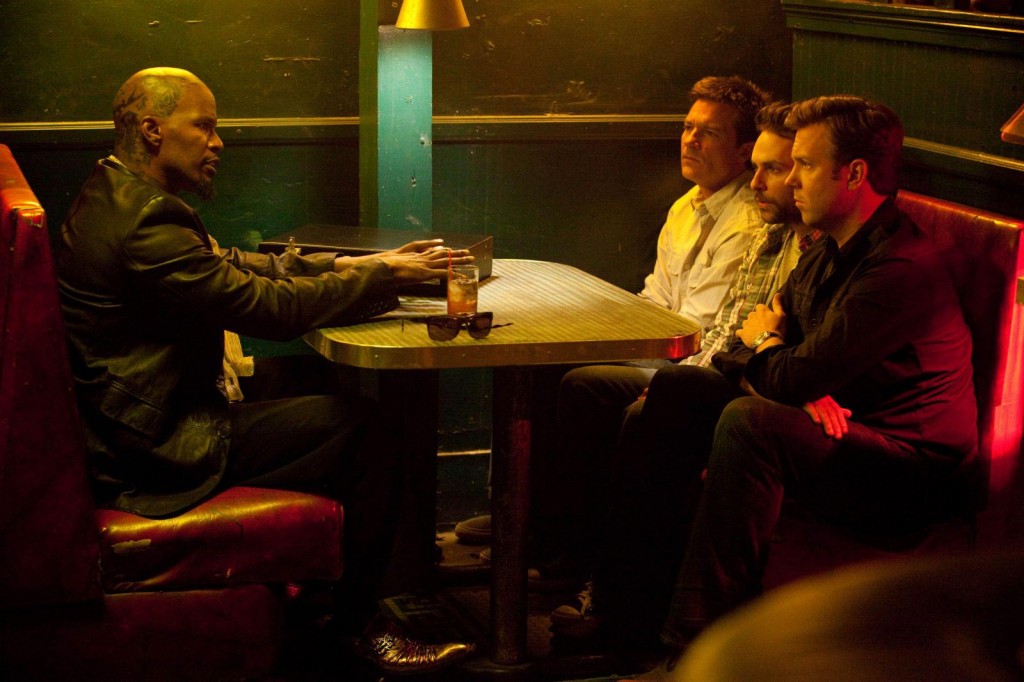 … and the little bear said: “somebody’s been eating my porrige, and she’s right here!”…

Horrible Bosses is definitely not a suitable film for younger kids – this is an adult comedy through and through. While the gratuitous sexual overtones are kept to a minimum for a change, they are present in the rather risqué and ribald dialogue sprinkled through the movie in contextually expected scenes. Specifically, Aniston and Day, who have a great chemistry while together on-screen. I normally find these crassly written films quite annoying; I hate to say it, but the proclivity of writers to find humor in constant use of the F-bomb seems to be increasing, much to my chagrin. Horrible Bosses does contain a fair amount of potential for expletives to bombard us in place of actual humor, but thankfully, the story rises above it – for the most part. Crude language aside (and please don’t think I’m some kind of prude who doesn’t appreciate a good curse word every so often – I do, just like you!) the film is cleverly written in much the same vein as an old British farce, and as such, the actors must eventually play that high-pitched histrionic style of humor to the brink of tolerability. The film is less funny in a traditionally straightforward manner than it is in its smaller character moments.

As a non-fan of previous adult oriented comedies (although why filmmakers feel the need to dumb things down for us adults is beyond my comprehension) in the vein of Judd Apatow and the like, Horrible Bosses is a surprisingly funny affair. More than once I chuckled to myself, and a number of times I laughed out loud – something I don’t do too often these days with many films masquerading as comedies. The fact that Horrible Bosses drew a laugh from me should indicate that it’s pretty damn funny.

What others are saying about Horrible Bosses:

Dan The Man had this to say: “The script’s laughs relies too much on weak punch-lines, conversational comedy, and a script that could have focused more on the solid premise, but much thanks to the great cast full of big-names and some funny laughs, Horrible Bosses is funnier than a lot of recent buddy-films that have come out.”

Aiden at Cut The Crap said this: “Had a great premise going for it and some great performances from some unlikely A-listers, but just didn’t get me laughing as much as I thought it would.”

The guys over at The Movie Brothers enjoyed it… : “This was an enjoyable comedy. It’s not particularly memorable. I didn’t laugh until my sides hurt, but it worked.”