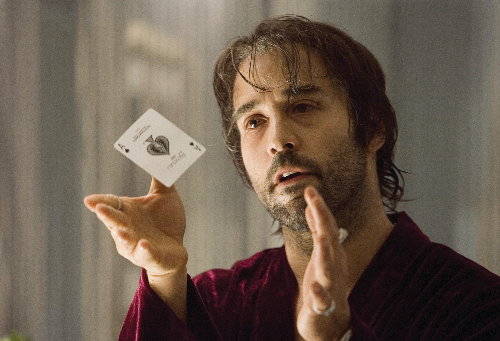 Confusing, contrived Tarantino-clone gab-fest sprinkled with over-the-top violence, Smokin’ Aces suffers a lot from too much style over a whole heap of little substance. It’s a clever plot, and a really cool premise, but let down by an unclear motive and a roster of characters less likeable than George W at a missile finding convention. Director Joe Carnahan, who would go on to helm A-list flicks like The A Team, has an awesome ensemble cast to work with, and then proceeds to screw us over by giving all but three of them sod all to do. The complex plot, as well as the underwritten characters, tend to overwhelm the film as it barrels along at top speed, blood and bullets flying. It’s another style over substance affair that entertains while in action, but is immediately forgettable.

There’s always been that old saying: Dying is easy, comedy is hard. Never has that truism been more reflective of the comedy offering here today. Of all the genre in film, it is perhaps comedy that is the most subjective. You either find something hilarious, or you don’t. Other genre, such as action, horror, drama or science fiction, for example, are either good or bad because of their story and characters. Comedy films, in the main, depend on a viewer’s sense of humour, as opposed to their attention span. For everyone who finds Monty Python’s Dead Parrot sketch hilarious, there’s a dozen who don’t. Which is a problem for any list purporting to state which is the best of a bunch of comedy films, because no doubt everyone will disagree with me on the below list in some way. So how to approach such a divisive and potentially controversial issue? Simple. I don’t. Instead of offering some trite platitudes about what I find funny, and what turns me off, I’m just going to offer my own choices on the films I find to be the funniest, most impressive comedy films to come out of Australia. So, without further ado, my choices for the top Aussie comedy films….

Stylish, yet curiously ambivalent action/adventure flick from British director Marshall, sees plenty of blood and gore spraying across the screen: the point of the film, and indeed the characters themselves, seem lost in amongst the Gladiator-styled carnage and chest beating testosterone. Local distributor Hopscotch should also receive a caveat for their deplorably horrifying BluRay transfer, which only exacerbates the frustration with this film.

A quick tip of the hat this morning folks, to acknowledge the passing of Oscar nominee (and Superman’s mum!) Susannah York, who passed away on […]

Diabolically scripted, acted and edited, yet filmed with the bloodthirsty glee of modern horror, Piranha gets the thumbs down for being, frankly, dumber than a box of hammers. With several tips of the hat to Jaws, as well as numerous other underwater-sea-creature features, and with the sense of glib carnage accorded modern blood-horror flicks these days, Piranha meets the requisite body part count about ten minutes in and keeps going from there. Horror fans will enjoy (if not entirely appreciate) the “fun”, but the rest of you have been warned: this film isn’t for you.

Terrific (if predictable) yarn featuring some truly awesome animation, Despicable Me is a pretty decent film by anybody’s estimation. Vocally adroit, stylishly executed, and featuring the coolest minions ever assembled in a film before, Despicable Me deserves more than a cursory glance from audiences everywhere. Great stuff.

Extraordinary animated film, the perfect final chapter in this toy-based triptych, and a resounding storytelling triumph.

I know, I know, we told y’all that we’d no longer be uploading trailers and such to the site: that was mostly true, but after […]

Afternoon folks. Just thought we’d put something up in recognition of those who are suffering at the moment across our great land, particularly in Queensland […]

My long awaited copy of Bullitt will get a special screening tonight. I received it yesterday in the mail, and now I learn of the […]

Depending on your tolerance for the fantastic, the bloody, and the completely insane, Ninja Assassin will either delight or appal you. Considering my favourite two films are Moulin Rouge and Armageddon, my credibility at detesting a film with less intellect than Showgirls is limited to say the least. Ninja Assassin is perhaps one of the stupidest, most predicable and nonsensical films ever to grace the Fernby Films screening room – but it also one of the most entertaining.

Very quick tip of the hat this morning regarding the passing of Anne Francis, the woman who starred alongside Leslie Nielsen and Walter Pidgeon in […]

Lovely, good-but-not-great return to hand-drawn features from the Disney studio, features some wonderful (but unmemorable) tunes sung by both frogs, ‘gators and firefly, as well as some menacing characters that threaten our heroes. While it will never reach the lofty heights of Disney’s modern classics, such as Aladdin and The Little Mermaid, The Princess & The Frog will delight both children and adults everywhere.

One of my friends here at fernbyfilms.com, a man by the name of Robert Nowotny, runs his own website Need To Vent, which publishes reviews […]

Sad news tonight, folks, with the news coming through of the passing of one of cinemas true shining lights. Pete Postlethwaite, best known for supporting […]

Welcome to 2011 folks! To kick of the new year, I have a trailer for y’all to enjoy, which is designed for the upcoming release […]

A special New Years tip of the hat to special effects legend Grant McCune, who passed away on December 27th, 2010. McCune, along with fellow […]

Welcome to 2011 everyone! It’s great to be here, and we hope you all enjoyed your holiday season as much as we did. We’re still […]