Director : Gore Verbinski
Year Of Release : 2011
Principal Cast : Johnny Depp, Isla Fisher, Abigail Breslin, Ned Beatty, Alfred Molina, Bill Nighy, Harry Dean Stanton, Ray Winstone, Timothy Olyphant, Stephen Root, Maile Flanagan, Ian Abercrombie, Claudia Black, Charles Fleischer, Blake Clark.
Approx Running Time :  107 Minutes
Synopsis: When he’s lost by his human owners, a lizard wanders into the desert town of Dirt and becomes the local sheriff. Western antics ensue.
What we think : Gob-smackingly beautiful film to look at is actually a hilarious pastiche of every Western film cliche under the sun, and while you might expect to know what happens next, there’s a sense of playful freshness to what is, essentially, a cobbling together of every Clint Eastwood film ever made.

This isn’t going to be a difficult review to write. Rango, the latest film from director Gore Verbinski, is a stunning animated piece of filmmaking that adults and older kids will absolutely love. With a fabulous voice cast, pitch perfect riffing on the classic Western genre, and a dynamite sense of adventure and fun, Rango will enchant anybody who loves movies, and entertain anybody who doesn’t. It’s got something for everyone. 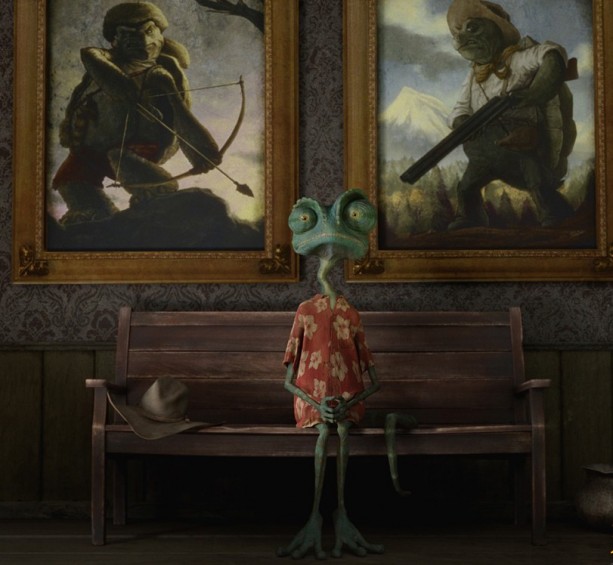 A lizard (voice of Johnny Depp) living in a fish-tank is accidentally ejected from his humans’ vehicle whilst they’re driving across the desert. Lost and abandoned, the lizard befriends a local armadillo, who advises him to trek off into the desert to the town of Dirt, which the lizard promptly does. There, he discovers a small desert town, populated by all manner of desert creatures, eking out an existence under the blazing sun. Dirt is a town on the edge, however, since the water supply is, or rather, has, dried up, causing plenty of townsfolk to leave. The lizard, taking on the name of Rango during a particularly hilarious encounter with some locals at the town bar, is soon promoted to sheriff due to his (fake) stores of grandeur. Rango, you see, has led a pretty lonely life inside the fish-tank, and now has an opportunity to make a name (up) for himself. His role as sheriff brings him into conflict with the town mayor (voice of Ned Beatty), a turtle who controls the water supply, and whom it appears has some crooked connection with some underhanded low-lifes. Soon, the battle for Dirt is on, as water becomes more precious than gold, and the townsfolk gather around Rango to succeed in finding it. 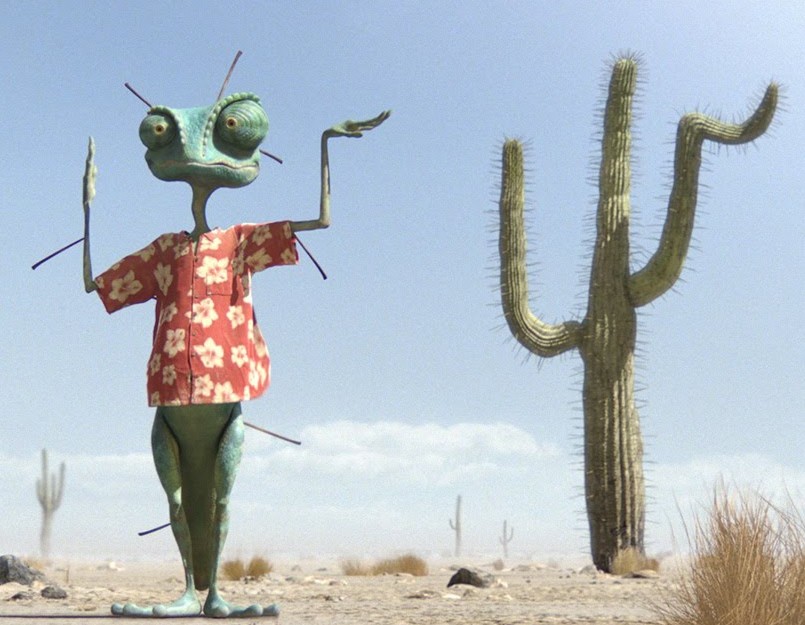 Rango isn’t a new story – not in the least. It’s a story by numbers, if you will, in that pilfers liberally from films as diverse as Once Upon A Time In The West, Pale Rider, The Good The Bad & The Ugly, A Fistful Of Dollars, and even The Quick & The Dead, among others (and one of those others includes Apocalypse Now, in a bravura bat/rodent chase through the canyons around Dirt). Keen eyed genre fans will find numerous nods of the hat to their favorite film style, as Verbinski takes a break from directing Pirates Of The Caribbean films to helm this charmer. Rango is a delight: the story is pretty simple, and the characters are fairly standardized, which means getting to know them isn’t exactly difficult. Where the film’s delicate balancing act comes in, though, is by making these characters feel fresh and new, a surprising facet of Rango which I was not prepared for. Rango’s the “everyman”, or, to put it in Western parlance, he’s a homage to Eastwood’s classic Man With No Name character, even if the lizard does take up the moniker Rango fairly early on in the piece. The script is written by John Logan, and anybody looking him up on Wikipedia will soon realize that he’s a prodigious talent: among his varied credits are films like Gladiator, The Last Samurai, Bats, and even Any Given Sunday for Oliver Stone. Logan taps into the pulse of the classic Western, ratchets up the cliches to the point where they’re funny, and lets loose with a giant cast of supporting talent to surround Rango as the central character. 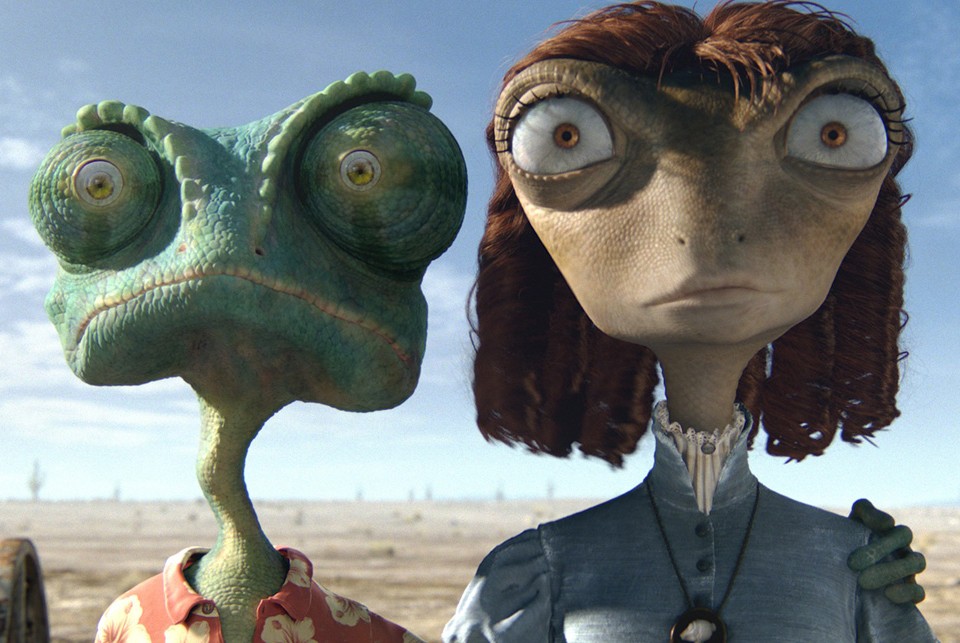 Puttin’ on the moves…

Isla Fisher, wife of Sascha Baron “Borat” Cohen, does a terrific job as the local loony woman Beans, essentially a pastiche of Once Upon A Time In The West’s Jill McBain (played in that film by Claudia Cardinale), although in this iteration blessed with a penchant for suddenly “freezing” solid for a few moments, as a kind of self preservation measure. It’s nonsensical, yet hilarious, at the same time. She’s Rango’s love interest in the film, although the characters’ chemistry isn’t as strong as it perhaps needed to be for that to work properly. Fisher is virtually unrecognizable in the role, and it was only during the end credits when I placed her voice. Ned Beatty reprises his “evil kindly villain” character portrayal (after Toy Story 3’s Lotso) with Tortoise John, the Mayor of Dirt, and the man responsible for the lack of water in the town. Beatty is solid here again, although his character is perhaps the least developed of them all. John’s henchman, a gila monster named Bad Bill, is voiced by Ray Winstone (Beowulf, Indiana Jones & The Kingdom Of The Crystal Skull) in what is, essentially, a cliche of every British-voiced thug ever seen on screen. Other big-name stars include Abigail Breslin as a cutesy child mole, Priscilla, Harry Dean Stanton as Balthazar, an older mole (but no relation to Priscilla), Bill Nighy as Rattlesnake Jake, the films key power-villain in the final act, and Alfred Molina (again, unrecognizable) as the armadillo Rango befriends at the films opening. The entire cast inhabit their roles perfectly, with leading man Johnny Depp proving an inspired choice for Rango himself.

Depp, as Rango, was a strange choice for an animated film, in my opinion, although he’s more than redeemed himself in my eyes with his spot-on portrayal as the guileless, lonely, unmotivated lizard set to turn things around in the town of Dirt. The patter and banter Depp delivers is both hilarious and on point for the role, bringing a modern zing to Dirt’s genuine Western aesthetic. As a character, Rango isn’t the most powerful, nor the most intelligent, and as with most simple heroes, often happens to be in the right/wrong place at the right/wrong time. Things happen around Rango, whether he wants them to or not, and Verbinski isn’t one to pull back from irony or sarcasm in an animated feature. There’s a sly wit to proceedings, almost as if the characters can sense this is all to be played with fun. That’s not to say Rango is a kiddies film, not in the least. This isn’t a film for the younger tots, what with Bill Nighy’s truly frightening Rattlesnake Jake tearing it up late in the piece as the films major, majorly scary, villain. One of the characters, in a non-threatening kind of way, walks around the while film with an arrow through one eye, and I’d hate to have to explain how that’s possible to a four years old. No, I wouldn’t let the really little ones watch this, because it’s too intense, and the animation is too realistic. 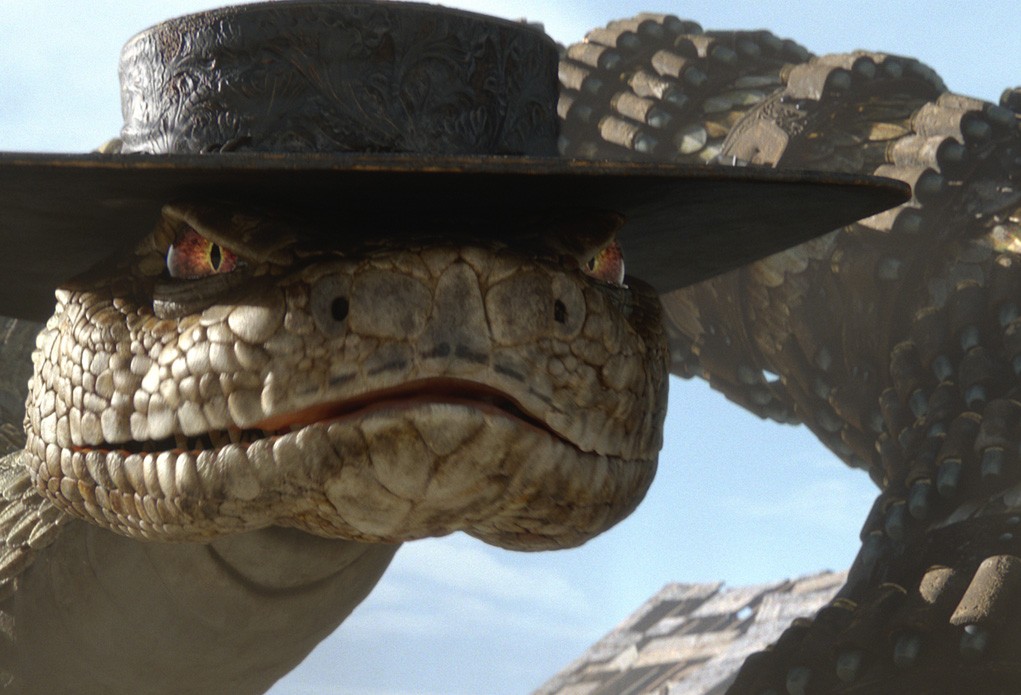 Ahh, the animation. There are entire scenes, nay, entire acts of this film which look so real that look real. I mean, they actually look like a real place. The visuals on this film make The Owls Of Ga’Hoole look antiquated by comparison, and y’all know how I raved about that. Every nuance of texture is vivid, detailed and amazing to witness, from the skin of Rango to the hair on the chin of the armadillos, Rango looks stunning. Breathtaking. Insert your own adjective here. Quite simply, if you didn’t know it was animated, you’d think it was real.That said, there is a problem with the film I can’t ignore. Rango’s motivation for helping the inhabitants of Dirt, indeed, for his journey of self-examination and mythical legend-building, is pretty weak. With his impetus reduced to some half-cocked idea about becoming somebody he’s not (or, not being somebody he is… something like that), Rango’s emotional journey isn’t as strong as it needed to be – especially towards the film’s narrative low-point, where his friends discover Rango’s secret, and he’s forced to confront his true self and feelings about what he’s been doing. It’s almost a cliche within a cliche – perhaps the filmmakers felt that the idea of Rango was more important than the character of Rango, and thus didn’t give him enough depth as a lizard, reducing our attachment to his emotional plight to a mere blip by comparison to his physical one. I’d say this is perhaps the only part of the entire film I found lacking, and it’s enough to reduce my overall score by a whole star. 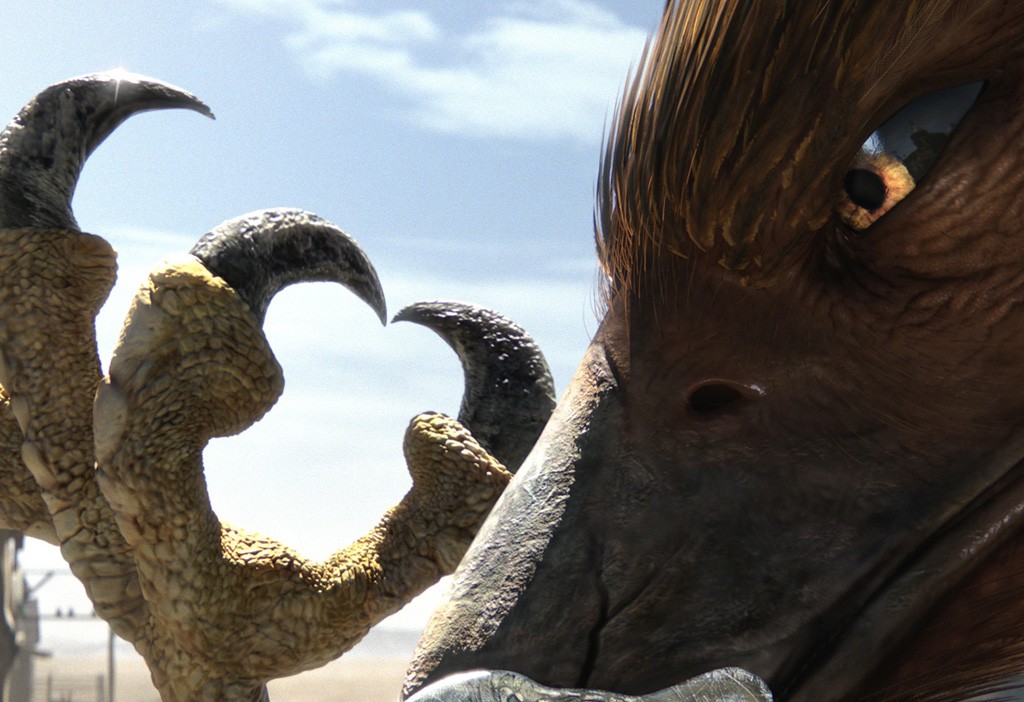 I loved Rango, although my wife, the gorgeous Lisa T, didn’t appreciate it that much since she’s not a fan of Westerns. I’d hesitate to say that Rango’s a film you can only watch if you enjoy or appreciate the Western genre – the film has a lot more going for it than just that, but if you don’t like Cowboy and Indian movies, then there’s a fair chance you probably won’t get a lot of the subtleties in Rango. As I mentioned, it’s got plenty to offer the casual viewer, and older kids will find the animation quite dazzling (as will adults), while the characters and plethora of action will also ensure viewers are kept in their seats. Rango, as an entertainment, is essential viewing.