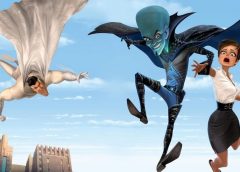 Director : Tim McGrath
Year Of Release : 2010
Principal Cast : Will Ferrell, Tina Fey, Jonah Hill, Brad Pitt, David Cross, JK Simmons, Ben Stiller, Justin Theroux.
Approx Running Time : 95 Minutes
Synopsis: After defeating his arch nemesis, Metro Man, Megamind finds that without somebody to thwart his evil plans, he’s unable to continue being the Bad Guy. So he invents a new hero, Titan, who turns out to be evil instead, meaning that the evil Megamind must turn to the side of good to stop him.
What we think : It’s just terrific. There’s a couple of slow spots, but otherwise, Megamind is both entertaining and hilarious. Which is all I ask of any animated film.

Ahh, the second film released in 2010 that told a story from the point-of-view of the Bad Guy. Alongside Despicable Me, which had a decidedly family bent, Megamind once more inhabits similar territory by focusing on Metro City’s resident Super Villain, Megamind. Unlike Despicable Me, however, Megamind feels more like the action-y bits of The Incredibles than Despicable Me’s more character-driven self-reflection. That’s not to say Megamind isn’t without some character development in this regard, it’s just like comparing the brutality of Saving Private Ryan with the more reflective Thin Red Line. Megamind isn’t the most subtle film, at least not as far as being able to pick where the story is going to go, but it’s sure as hell one of the most entertaining animated films I’ve seen in ages.

Metro City, Somewhere USA, has one resident superhero – Metro Man (voice of Brad Pitt) – and one resident super-villain – Megamind (voice of Will Ferrell), both of whom do combat relatively frequently across the city. Megamind’s plans often fall foul of ineptitude, or Metro Man’s heroic chin, while the popular hero seems a God amongst the inhabitants of the city he protects. Covering it all, erstwhile reporter Roxanne Ritchie (voice of Tina Fey), seems to be finding the constant antagonism somewhat repetitive – at least until Megamind manages to kill Metro Man after discovering (inadvertently) that the famed hero has one weakness – lead. With Metro Man defeated permanently, Megamind takes over ruling Metro City, only to discover that without a sparring partner, his life is essentially pointless, a rapidly darkening downward spiral of tension-free crimes for which he overpowers the local constabulary. Using his incredible brain, Megamind creates a new hero from Metro Man’s DNA – Titan, voiced by Jonah Hill, who he intends to use as the new savior of Metro City – only to find that Titan would rather perpetrate crimes and behave like an imbecile than become the new hero of the city. Megamind finds himself on the other side of being a villain, and must fight to save his beloved (?) city from the evil powers of Titan.

This film tickled all the right bits of my body, just the way I like it. Ostensibly a riff on Superman, complete with the modern female reporter torn between her job and her love for the Hero, as well as the adoration of the entire city, Megamind seems initially like it might tread the same ground as Brad Bird’s The Incredibles, complete with the hip-conscious self-referential humor and subtle winks to the audience at its own cleverness. While I was enjoying the film, I never ever felt that it was trying to be clever to me, however – rather, Megamind seemed comfortable in its own skin, developing the story and characters with a wry wit and nuanced delicacy. Hidden beneath the posturing characters – Metro Man and Megamind in particular – is a clever little morality fable (aren’t they all?) about being oneself, using ones abilities to help others instead of oneself, and how not to obliterate a major urban center by dropping a building into it. While the story and character templates may be a little cliched, and the overarching narrative perhaps a little too often slipping into pastiche instead of homage, Megamind treads the delicate balance of being both a riff on established archetypes, but an invigoration of those archetypes as well.

Megamind’s major success lies in its casting, and I have the pleasure of admitting that even Will Ferrell, an “actor” I could quite happily never see another film from again, is actually pretty decent in this. His vocal performance is, in a word, restrained. The usual lunacy and hideous man-child gurning we’ve endured in films like Talladega Nights and other supposed comedies (Anchorman notwithstanding, because that film is one of the better comedies of the last 20 years) is gone, replaced by a voice riddled with anxiety and disbelief – Megamind isn’t the most confident person in the world, for all his bluster, and Ferrel taps into this self-doubt with seeming ease. Ferrell seems to handle the demands of the character well, imbuing Megamind with both the soul of a tormented evil archvillain, and the personality of somebody who, Heaven forbid, we might actually like. Making a bad guy likeable is a big ask for any actor, as Steve Carrel could probably attest to, but Ferrell acquits himself honorably. I was impressed to much, I’d even go as far to say that I think Ferrell outdoes Steve Carrel in the Bad Guy As The Good Guy department, something I never thought I’d say.

Tina Fey, the films other main cast member, is appropriately feisty as Roxanne, although her character does feel a little thin in the natural arc area: her backstory isn’t developed at all, and why both Metro Man and Megamind have a thing for her is beyond me, but Fey has enough talent in her performance to overcome such shortcomings. Brad Pitt is as 2 dimensional as you can get in a CG film, although this is by intent rather than inaction. Metro Man is a facile, arrogantly self-loving lunk, living off his fame and existing on his powers – a grandiose pomposity which, were I to have the powers he has, would probably make me act the same way: Brad Pitt delivers a suitably vacuous vocal performance, all square-jawed puffy-chest with the arrogance the character inspires. It’s hilarious, I admit. The main bugbear character for me, though, was Jonah Hill’s Titan, a Frankenstein creation of Megamind’s when Metro Man is killed. Titan, otherwise known as Roxanne’s nerdy, hapless cameraman Hal, comes off as a near-identical clone of The Incredibles‘ Syndrome, down to the red hair and the nerdy-rage backstory. Titan’s rise annoyed me, because I kept thinking of the great work Pixar did to reinvent the classic superhero anti-hero – somebody who could use his powers for good, and at one point probably would have, but due to actions from the hero (or, in this case, Megamind, the villain) decides to turn bad. Even Jonah Hill’s snivelly performance, while apropos to the character, seemed a complete ripoff of Jason Lee’s Syndrome character; the whiny, “woe is me” faux-angst a virtual carbon copy of Pixar’s infamous baddie.

Megamind is directed by Tom McGrath, and while Dreamwork’s rubber stamp of technical superiority is all over this baby, the film is hamstrung by an over-reliance on knowledge of the Superman mythos for its humor; at least, that’s the way I felt while watching it. The film gives away plenty of its story points with the subtlety of a hammer in the forehead – it’s quite predictable. At one point, Megamind uses a device to transform himself into the curator of the Metro Man museum in order to get close to Roxanne, a plot device which rapidly becomes overused after the fifth, sixth and seventh transformation. And you just know that device will end up coming into play during the final climactic battle – it’s only a matter of how. McGrath’s keen eye for camera angles and lighting, as well as a fairly humorous editing choices, give Megamind an energy and enthusiasm for its source material which is impossible to fake. The guys working on this film were obviously invested in the story – a major plus. The problem lies less with the story itself, and more with the fact that it’s been done before, and quite recently. The trouble with superhero films, even animated ones, is that they’re often held up in comparison with those which have come before – in this case, the closest example would be The Incredibles. Megamind doesn’t have the character depth of The Incredibles, but it more than makes up for that in whiz-bang action and special effects. Critics will often point to a reliance on special effects and whiz-bangery as a deficiency in the film, and I myself have been known to tread this path as well – that being said, Megamind isn’t the broad-scale, epic adventure film that The Incredibles was. Instead, it’s a lighter, frothier, funnier Superhero Film than The Incredibles, so depending on your expectations and inevitable comparisons with Pixar’s work, you will either be entertained, or mildly amused, at what Megamind delivers. If The Incredibles is a cappuccino, then Megamind is a latte. Some people like latte.

Me, I loved it. Sure, the story did slow in parts, particularly with the somewhat clunky relationship building between Roxanne and Megamind, but the film leaps skyward when the tension unleashes itself into action. Megamind barrels along with a sense of true comic-book style, from its bright, shiny color palette to the explosive, impossibly illogical laws of physics this world enjoys. The concepts will float above the youngest viewers, however, but older kids will lap it up. In any case, if my young daughter decides to put this film on endless loop when she’s old enough, I’m not gonna put up much of a fight. It’s impossible not to enjoy and appreciate the work that went into this film, and I think anybody who says they didn’t enjoy it have no heartbeat.