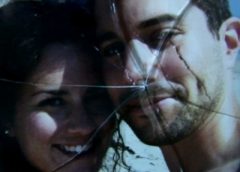 Director : Oren Pe
Year Of Release : 2009
Principal Cast : Katie Featherstone, Micah Sloat, Mark Freidrichs, Amber Armstrong.
Approx Running Time : 86 Minutes
Synopsis: A young couple is terrorized by a demonic spirit haunting them in their house. The guy decides to video it all.
What we think : Annoying characters populate this otherwise fascinating “haunted house” film, making a somewhat convoluted use of the “found footage” genre which appears to have sprung up in light of the YouTube generations fascination with filming even the most mundane stuff. Both of the leads in this film lack any kind of self-preservation response, and the guy in particular is an absolute douche, leaving me wishing with all my might that this coulda been a better film if he’d been killed off early or something.

Righto. Just, righto. It’s taken me a couple of years to get around to watching Paranormal Activity, mainly because my good wife didn’t want me bringing a “haunted couple” film into the house to watch while she was around. She’s a bit superstitious like that. Me, I’m not. Things that go bump in the night don’t scare me (normally, although I will admit to a few brown-pants moments during childhood) and unless they’re obvious Boo-Movie scares, generally I’m unaffected in any serious way. Paranormal Activity is less a character driven piece and more a scare piece, produced using the “found footage” formula we’ve become used to since Blair Witch Project and Cloverfield elevated the medium to an art-form. Does it work? Yes, it does do a solid job of delivering decent scares and chills to a more susceptible audience, but honestly, I found it wearying after the umpteenth bump-in-the-night event.

The idea is simple. A young couple, Katie (Katie Featherstone) and Micah (pronounced Mee-kah, like the singer, and played by Micah Sloat) are being haunted by a mysterious entity in their house. Or, should I say, Katie is being haunted by a ghost or spirit that’s been around since she was 8 years old. What the entity wants, we do not know. What it can do, well, as the film progressed, the danger to our leads increases as more and more powerful events take place. As the film opens, Micah has just purchased an expensive video camera (we want to catch all this in hi-def, right?) to film and document the mysterious “occurrences”, although he doesn’t believe they’re all that serious or dangerous. A few creaking doors, a few night terrors, nothing too serious. Katie, however, isn’t convinced, realizing that Micah seems more intent on getting footage to put on the internet than actually helping her rid them of this presence. Micah sets up the camera in their bedroom, filming them sleeping, which, at least initially, is when all the creepy stuff start to happen. Footsteps, banging, clanking and loud thuds penetrate the night, forcing Katie and Micah to go without sleep for extended periods. As their nerves and tempers fray, they become increasingly desperate, until the entity begins to manifest in a more malevolent way, leaving a devastating impact on both the young couple, and us as viewers.

This is the kind of film you could make on a weekend, actually. A cast of two people, inside a house, with a video camera, filming creepy, door-slamming stuff for a few weeks, act all frightened and tense, edit it together and add in a pulsating 5.1 mix, and there you have it. Deceptively simple, the film is a well set up, well executed piece of fly-on-the-wall material, utilizing some effective sleight-of-hand to undermine the audiences expectations of what they’re both hearing and seeing. Katie and Micah are young, attractive and apparently millionaires, because we see them with plenty of money but never going to work. They could be anybody, any of you, and that’s the crux of why this film is so effective. It could happen to any of us. That said, if it did, I think I’d behave a little less like a wanker than Micah did in this film. More on him in a second. Director Oren Peli takes us into a bland, unassuming apartment in the suburbs, gives us (relatively) bland and unassuming people to watch, and throws in a bunch of good scares to see what happens. Paranormal Activity manages to avoid the obvious cliches this kind of genre throws up from time to time (pun intended on The Exorcist folks, did you get it?) and delivers some genuinely effective moments of pulse pounding terror. The script seems ad-libbed, pretty much, relying on both Katie and Micah to develop their characters organically and with little constraints to draw us into their plight. And draw us in they do – Katie seems the more level-headed, while Micah is…. well, he’s a little shit, to be honest.

If there’s a major problem with Paranormal Activity, it’s the character of Micah. Micah is a douche, a stupid, imbecilic moron half the time in this, behaving like it’s all a big joke when it patently obvious to all and sundry that there’s more to these events than just the ranting of a crazed female at that time of the month. When things go bang, he jumps up startled, then acts like an idiot after finding nothing wrong. He treats his girlfriend like an idiot, almost as if he’s in denial about the presence’s effect is having on them, and at one point tries to be all “manly” about it: note to self – when shit happens to me that I can’t explain, and it looks like weird things are happening that can’t be explained by gusts of wind, un-oiled door hinges or weird sleepwalking issues, than get the hell out of the house, man. Don’t stay there, even if you’ve hot a high-end HD video camera recording it all, because if history and Hollywood have taught us one thing, electronic equipment is always the first thing to go in a major demonic event. Did you see all the iPhone’s in The Exorcist? Or the demon-killing laptop in Signs? Nope. Paranormal entities, especially the evil, cruel ones, don’t give a crap if you’ve got the camera on, they’re just gonna scare the crap out of you regardless. Micah, always the “cameraman” for this film, seems intent on annoying the audience by doing stupid things, and, as with most post-adolescent folk these days, not listening to his girlfriend. She says she’s scared (terrified) so he decides to experiment a little more to see if he can “make it happen again”… man, some people lack even common sense, don’t they?

Micah is such a dickhead in this film, it ruined the overall impact of their relationship starting to strain and buckle under the intense, sustained terrorism going on. To be honest, part of me hoped he did buy the farm just so we’d be rid of him. I can’t blame the actor for this, because I’m sure Sloat was doing as directed, but his character was so frustratingly obtuse as to be annoying, it took me out of the film a lot. Katie seemed typically female: trying to remain strong, breaking down and even, at one point, being possessed. She’s a decent person, a person trying to understand why she’s been singled out for this haunting, and finding it tough living with such an idiot boyfriend and lack of sleep. But Paranormal Activity isn’t a film about people’s feelings as much as it is about setting the tone for the frights and scares. And boy, are there some good ones. Doors slam, sheets flutter, footsteps thunder through the house in the dead of night, weird occurrences shock and frighten both the cast and us, all captured on that damn video camera.

Peli gets the premise, and what it takes to truly frighten people. Most people are scared of the dark in some way, especially when strange noises start occurring, so Peli wisely keeps the majority of the early scares to the dead of night (thanks to a handy time-code on the night-time footage), and long passages of silence and inactivity take place before the ghostly events start to wind up. Peli also saves some of his strongest material for later in the film; initially, the visitations are fairly benign, being mainly thumps, bumps and whispers. By the end of the film, however, let’s just say that the manifestations start to take on a more direct, chilling effect. I did find myself starting to almost anticipate these events occurring well before they did, mitigating much of the fright effects, and honestly, by the end it was more of the same. The clunks and clangs, screeches and thunderous banging throughout the film isn’t really enough to scare one after several scenes like this, and I was actually hoping for an actual visual manifestation of the demonic entity – instead, we get possession, something I tend to think undoes all the fear and terror which has come before by relying on the change of personality within the possessed, and in this instance, the effect is minimal. With Micah being an utter tool, and the perfunctory, shatteringly cliched ending removing much of the good build-up from the previous hour or so, Paranormal Activity is an often thrilling, ultimately convoluted affair that will scare the bejeezus out of newbies, but make the rest of us start to scratch out heads at what’s it supposed to be about.

If you like a good scare with your friends, then this is definitely one you should give a go: some beer, a pizza, and the lights off, and you’ve got a pretty effective film to use to hook up with that crush you’ve had for ages. She’ll be jumping in your lap for protection with this one. However, if you’re like me and feel a bit jaded with the jump-cut scares and constantly escalating “creepy” sound effects each time there’s an event, and if you have a low tolerance for watching stupid people make stupid character decisions on film, then Paranormal Activity will feel like painting a room mauve or taupe or something. It’s initially thrilling, but descends into cliched derivative-ness after a while; I enjoyed it, but I probably wouldn’t rave about it to my friends.