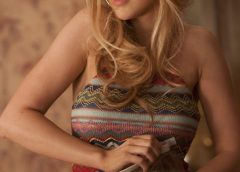 Director : Steven Antin
Year Of Release : 2010
Principal Cast : Christina Aguilera, Cher, Stanley Tucci, Cam Gigandet, Eric Dane, Peter Gallagher, Alan Cumming, Julianne Hough, Kristen Bell.
Major Award Wins : 2011 Golden Globes – Best Original Song: “You Haven’t Seen the Last Of me”, written by Dianne Warren, performed by Cher.
Approx Running Time : 119 Minutes
Synopsis: Young wannabe singer/dancer Ali travels to LA to live her dream – and ends up rockin’ it out at a burlesque club destined for development due to a ton of back rent and mortgage payments.
What we think : Not as bad as everybody told me it was, Burlesque has its fair share of issues, but is not unwatchable as entertainment. It’s no Moulin Rouge, or Chicago, but it’s worth a look if you’re a fan of musicals or Christina Aguilera, whose glorious vocals rule this film from top to bottom.

If Moulin Rouge and Coyote Ugly had sex, this would be their bastard child. Cliched, predictable, utterly contrived, Burlesque has no reason at all to be as entertaining as it is. Indeed, the critical mauling Burlesque received on release put me off watching this at all, until I sat down with the good wife to watch it the other night. Is Burlesque a crappy film? Did it deserve the vitriol sent its way? Yes and no. If you can fault it for being anything, it’s probably overly unoriginal. Smallt0wn girl leaves small town and travels to the big smoke with starry eyes and a hitherto undiscovered talent? Check. Is this small town girl hot as a box of matches? Check. Does she fall for the bartender who writes songs after hours and who, himself, dreams of making it big, but lacks the balls to try? Check. Cynical, motherly boss whose personal financial situation puts the entire club/bar/establishment at risk? Check. Cool gay secondary characters who bring humor to the film by playing upon Hollywood’s cliches of gay people? Check. Bitchy drunken “star” of the show who is put in her place by the hotter, better newcomer? Check. Burlesque ticks all the boxes, and ticks them in ink.

Alice (Christina Aguilera), a young waitress in Small Town America, up and leaves for Los Angeles to follow her dream of becoming a singer. Arriving in Hollywood, she lands herself a gig at a burlesque club owned by Tess (Cher), serving drinks, a job she uses as a steppi9ng stone to her real dream of performing on stage. Tess, meanwhile, has financial problems of her own, with the bank rapidly foreclosing on the club unless she makes mortgage payments. One of the clubs bartenders, Jack (Cam Gigandet) lets Ali sleep on the couch in his apartment, and (of course) the two ends up falling for each other, although that particular road of romance is kinda windy and steep. In steps property developer Marcus (Eric Dane) who wants to buy Tess’s club in order to build condominiums, and who also has designs on Ali himself. Tess’s ex-husband, and co-owner of the club Vince (Peter Gallagher) is trying to persuade Tess to sell to Marcus, although Tess won’t have it, under any circumstances. Cue musical numbers, Aguilera’s awesome voice, dancing and some pretty sexy people strutting across the stage.

Watching this, half of me was waiting for Piper Perabo to appear and start dancing on the bar. It didn’t happen, but if it had, maybe this film might have had the energy needed to elevate it from the big-budget music video it remains. Burlesque is, simply put, a vehicle to showcase Christina Aguilera’s amazing, powerhouse performing talent. Make no mistake, hearing Aguilera belt out some of the number in this show in HD surround sound is an experience not to be missed, especially if you’re a fan, but the rest of this movie is forgettable schlock. It’s entertaining on only the most superficial level, as director Steven Antin struggles with the pacing and energy of the non-singing parts of the narrative. And there’s a fair bit of that in this film. The plot is predictable, as I mentioned before, with characters stolen from other films and given only the barest development here: even Aguilera’s Alice and Cher’s Tess, the two main characters, are thinly developed and lacking in genuine emotional depth, which is a fatal flaw for the film. Stanley Tucci, seemingly reprising the same role he had in The Devil Wears Prada, minces his way through yet another campy performance as the quite gay Sean, Tess’s best friend and club stage manager. Tucci better watch out, otherwise he’s gonna be typecast every time out. Still, he’s the funniest part of the film, bringing a geuine levity to the otherwise leaden proceedings. None of the characters are worth investing in, because the script doesn’t give us any hook to cling to on any of them. They’re all two dimensional, stock characters whose motivations and story arcs you can see coming three miles away.

While the story and the script might be a pretty shallow affair, devoid of anything resembling an original idea, most of the cast gamely give their all in its execution. Cher, lacking any kind of movement in her face and ability to portray an emotion other than confused ambivalence, shows why she’s won an Oscar, giving one of the films most natural performances, elevating the material beyond what was printed on the page. Lead actress Christina Aguilera acquits herself pretty well for the material she’s working with, although it’s pretty safe to say she’s a better singer than she is an actress – that said, with a bit of time and training I think she’s got the makings of a genuine movie-star should she so choose. Her singing ability, which makes Cher look positively second rate, gives this film the hair-raising crackle missing from the character-driven moments. Cam Gigandet, as Ali’s bartender love-interest, smoulders convincingly, something fans of Twilight will enjoy but almost everyone else will find plain annoying. Gigandet does “hunk” well, I guess, it’s just that that’s all he is, and very little else. Alan Cumming is wasted in a very small role as one of the club’s performers, although he gives it his all when he appears. Kristen Bell, who starred in  Forgetting Sarah Marshall, all but obliterates her career as the former headline act Nikki, forced to pout and glower her way through a character so badly written and poorly developed it almost causes physical pain to watch. Grey’s Anatomy star Eric Dane does a pretty good job as the effectively ineffectual property developer: his character lacks spark or antagonism, making his hunt for Tess’s club a tepid, half-baked plot device. Is he a bad guy, or not? Initially, I thought so, but as the film goes on, it turns out he’s a nice guy, so the conflict in the film resolves itself without even a whimper. Even the supposed conflict between Ali and Jack, in which Jack must resolve an underdeveloped long-distance relationship with a girl in New York, fizzles quickly, with Antin’s direction unable to imbue the chemistry between the two actors with any real zing.

That’s the thing, I guess: the film lacks zing. Antin gives us a rendition of “Diamonds Are A Girls Best Friend” that falls flatter than a lemming at a cliff convention – dude, take a look at Bazz Lurhmann’s Moulin Rouge, or the “He Had It Coming” number in Rob Marshall’s version of Chicago for the answer on how to really mount a musical number, because the way Antin opens this film, it’s bereft of energy. Antin’s handling of the musical numbers is solid, although not cinematic, and his use of the widescreen aspect ratio is simplistic at best. The whole film feels like a glorified music video, with all style and no substance save the pulsating, pounding musical score. Antin stages the musical numbers much like Marhsall’s Chicago, although his camera angles and choice of shots in the editing suite feel… second rate, really. It’s like a midday movie filmmaking technique instead of a truly cinematic style.