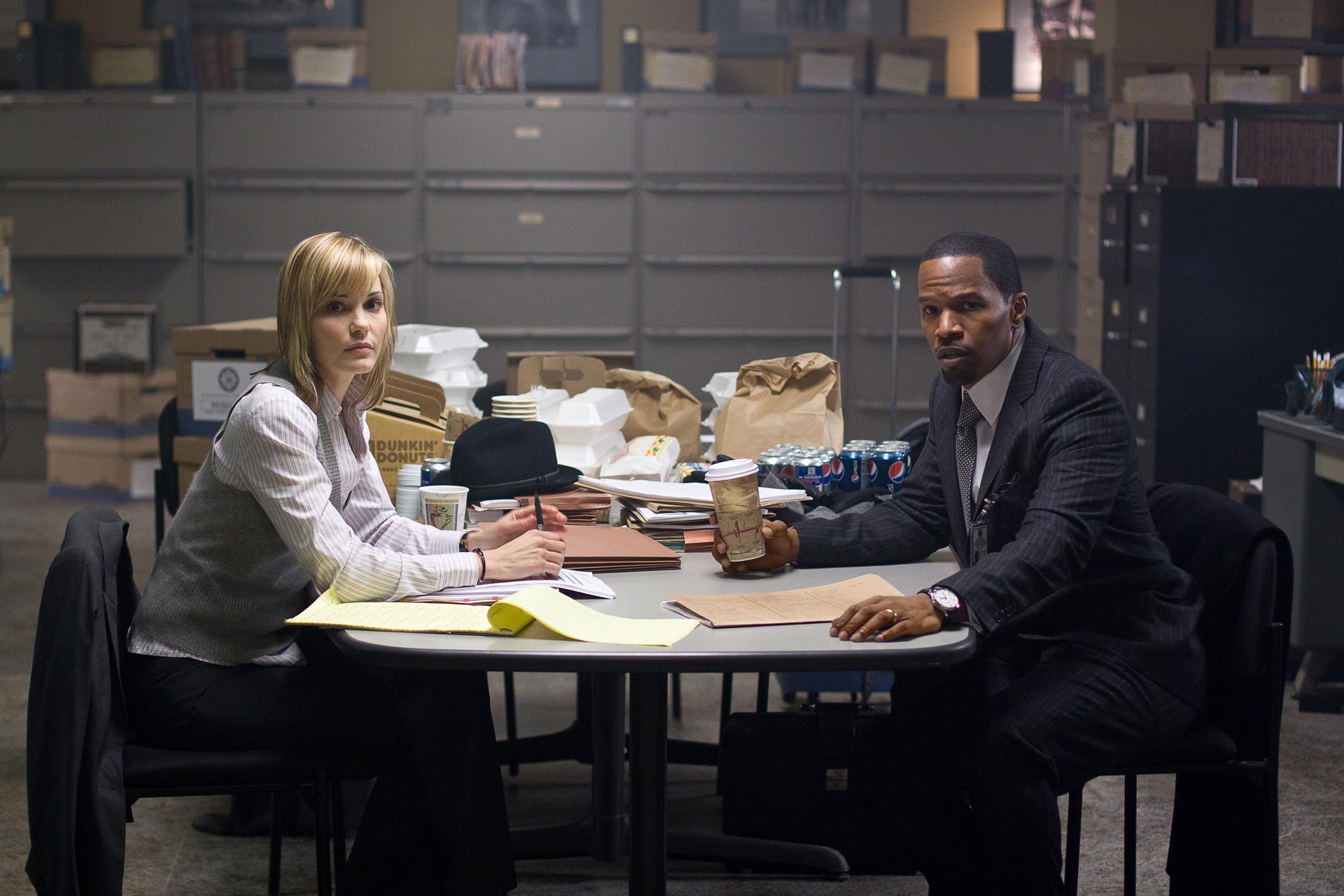 Director : F Gary Gray
Year Of Release : 2009
Principal Cast : Gerard Butler, Jamie Foxx, Bruce McGill, Leslie Bibb, Colm Meaney, Viola Davis, Regina Hall, Gregory Itzin.
Approx Running Time : (Director’s Cut) 136 Minutes
Synopsis: When his wife and child are killed, Clyde Shelton is shocked to learn his lawyer has done a deal for one of the murderers, which will allow the other to do a minimal jail sentence. 10 Years later, upon the execution of one of the killers, Clyde’s plan of vengeance begins, and it will bring a city to its knees.
What we think : Well developed, yet weirdly flat, revenge thriller putting Gerard Butler up against the always-reliable Jamie Foxx, as a man whose thirst for justice for his murdered family threatens to bring down a city. F Gary Gray, a reliable and perfunctory director (of such works as Frequency) often hits the mark here, but is let down by some moments of “meh”. Overall, a solidly entertaining thriller with a great twist, but it’s unable to make the transition to truly great.

There’s something about revenge films that polarises an audience. There’s the one group who side on the “eye for an eye” moral stance, while the others side with “do unto others as you want done unto you”, forgive and forget, and all that fluffy stuff. The brutal slaying of a man’s family would push the majority of audiences to have a degree of sympathy, if not understanding, towards the perceived need for justice. But when that system of justice lets you down, what then?

Law Abiding Citizen tries to be both an indictment on the current justice system in the US, and a thriller vendetta film; in some ways, it succeeds and fails. In the films brutal opening scene, Clyde Shelton (Gerard Butler) witnesses the murder of his wife and child, while he survives. After the pair of killers is captured, and brought to trial, Clyde’s lawyer Nick Rice (Jamie Foxx) tells Clyde that the case against both killers isn’t strong, although one of the men has agreed to testify for the prosecution in a plea bargain. One of the killers is sent to death row, while the other (the more violent offender) is given a 3 year sentence. Ten years later, and the death row killer is executed, although something goes horribly wrong and he dies in excruciating agony. Nick, present at the execution, discovers that somebody switched the canisters of lethal injection chemicals; and it appears to be the other killer.. at least, at first. Nick and his legal team, as well as the police, soon discover that it’s actually Clyde himself who has killed his family’s murderers, both in brutal, extreme ways. But this isn’t the end of Clyde’s plan of vengeance; he’s after everyone who had anything to do with the case, legal team included.

I came to this film keen to see the work of screenwriter Kurt Wimmer, the man behind one of my all-time favourite films, Equilibrium, and the debacle that was UltraViolet. He’s returned to the writing arena this time round (he also penned the Angelina Jolie action/thriller Salt) and I wanted to see what he came up with. Law Abiding Citizen is a decent enough effort, but it comes with a few flaws. As a concept, it’s a ripper: most audiences love to see a good vendetta film (even though Clyde himself states it’s not a vendetta) and Law Abiding Citizen delivers the emotional goods in that regard. You want to see justice done. And when it’s not, you want those who committed this heinous crime to pay. Particularly, you want them to pay in agony. An eye for an eye, after all. Clyde Shelton isn’t the straight up family guy we think he is at the film’s opening; but to reveal more would be to give away a pretty major twists in the story. Suffice to say: Clyde is a pretty dangerous man to piss off, and he’s now more than pissed off. I was keen to find out if the film would be a standard revenge thriller, or something more creative….

The film isn’t a full blown action thriller, at least not in the way the trailers promote it; Law Abiding Citizen relies more heavily on character development and an emotional bond with the audience, rather than vicarious thrills to get its point across. Unfortunately, we don’t have enough of Clyde pre-vendetta to generate a connection; and it’s this critical missing material that ultimately keeps the film from being truly great. Clyde’s eventual journey into angry madness is less a sympathetic trip and more a decline of his moral standards, with the ends in no way justifying the means and motive. By the end of the film, we get the idea that Clyde is so super-smart that he’s outsmarted even the audience, a critical error in judgement. Butler gives Clyde the shuddering rage required for a man bereft of anything to live for save revenge, you can see the anger swelling behind his eyes as he goes toe-to-toe with Nick. Foxx, as Nick, is a man caught between the system as it is, and the system as he wishes it to be. Foxx gives his character the requisite confused ethical strength to justify his initial belligerence without coming across as arrogant. He is arrogant, he’s just not a total bastard. Nick’s trying to work the system as best he can, the legal system of America coming in for the biggest swipe by Wimmer and his screenplay; the somewhat “blind eye” judicial prejudice that comes from hysterical minorities and flip-flopping politicians having an influence on what constitutes adequate justice. Nick, as the protagonist, should be the “bad guy” here, and it’s a credit to Wimmer’s script and Gray’s direction that he’s not. Instead, Nick is simply a man trying to do the right thing in the system he’s involved with. He’s caught in the cat-and-mouse game with Clyde, and it’s not entirely his fault.

Where Law Abiding Citizen tends to fall a little flat is its “character” moments. Nick isn’t the most approachable character in the film, he’s somewhat distant and underdeveloped outside of cinematic cliché. Clyde comes off somewhat psychopathic, which probably wasn’t the intent of Wimmer’s script. Due mainly to a lack of backstory (a trade-off for the major twist half-way through the movie) we’re never really involved in Nick’s plight. He’s barely developed beyond the superficial – a family man who now probably regrets his actions, but a man whose sense of right and wrong are gradually cleared by Clyde’s situation. Foxx gives it his all, but the ham-fisted writing of the second-tier characters undoes all his hard work. Nick’s female assistant Sarah (Leslie Bibb) seems to be an underdeveloped romantic interest (of the unrequited kind) and yet doesn’t get much to do through the film except ask questions that get Nick to explain what’s going on. Bruce McGill does a great job as DA Jonas Cantrell, but again, he’s vastly underused. The entire cast, save for Foxx and Butler, seem to be merely going through the motions, barely stretching themselves as performers, which is a problem I lay directly at the feet of a script more intent on its main leads. Fair enough, I’d normally say that that’s probably a good thing, but in this instance a little more character balance between Nick and his team, as well as his family, might have been conducive to a more emotional script. There’s some slight development of Nick’s relationship with his wife and daughter, the latter of whom has (pointedly) never seen her father attend one of her music recitals (a fact you just know will come back in the final reel), but it feels forced and ham-handed, the scenes feeling manufactured rather than organic and natural.

All this isn’t to say that Citizen is a bad film in any stretch: in point of fact, the film is still quite entertaining despite its flaws. Director Gray can certainly develop some tension on screen, as a few times Foxx and Butler come face to face in a verbal sparring match. It’s no repeat of the DeNiro/Pacino face-off in Heat, by any means, but Butler and Foxx are admirable enemies. The gob-smacking twists towards the end of the film, the grand reveal of “how did it all happen”, are particularly good, although slightly telegraphed (my wife managed to figure it out a few moments before the reveal). The finale, however, lacks genuine tension, due mainly to a rather anticlimactic confrontation in the last act. It’s a downer of a twist, a kind of “well, this is the best we could hope for” finale that ultimately isn’t as fulfilling as it should have been, considering the stakes the film gave us. While Law Abiding Citizen has many things to say about the legal system of the USA, it’s point isn’t well handled under Gray’s direction. Wimmer’s script lacks a real heart, even for a high-concept idea as this, and the characters seem distant and wishy-washy. The film still manages to make you think, though, and I guess if it stimulates your brain a tad, that can only be a good thing.

Look, for a solid little thriller Law Abiding Citizen has a lot to offer, and no doubt there’ll be some who enjoy the hell out of the film. I’ll admit that after I watched it, I felt that I should be impressed. After a night or two to think about it, however, I felt that I’d been short-changed into thinking that its pedigree made me expect it to be better than it was. Considering the talent in front of, and behind, the camera, I’d have thought Law Abiding Citizen was intended to be a tense, exciting and twisting thriller. It wasn’t exactly that, rather, it felt more like a movie-of-the-week effort that ultimately, didn’t do the concept justice.