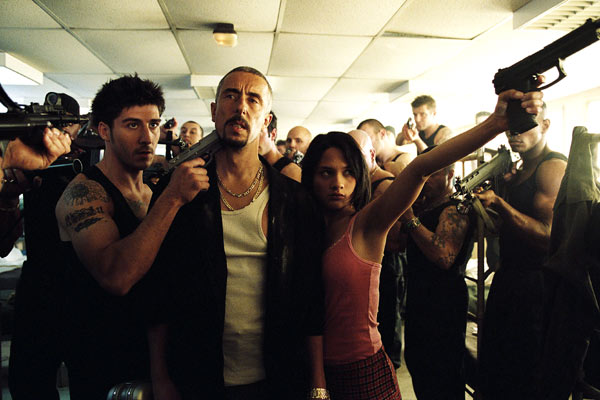 Director : Pierre Morel
Cast : David Belle, Cyril Raffaelli, Bibi Naceri, Tony D’Amario, Dany Verissimo, Francois Chattot, Nicolas Woirion, Patrick Oliver, Samir Guesmi.
Year Of Release : 2004
Length : 90 Minutes
Synopsis: When his sister is kidnapped by a violent drug lord, Leïto must team up with an undercover cop to get her back and disarm a stolen neutron bomb. Chaos ensues.
Review : Vivacious, ludicrously plotted action thriller, District 13 is a film where the story and characters are subservient to the style: normally a catastrophic combination, yet here, it works wonders. Director Morel understands that a film like this shouldn’t dwell too heavily on emotional plot and development, rather, it should keep the frantic pace up and the whizz-bang camera angles moving everywhere at once. Spectacular stunts far outweigh the limited character development and stock characters: this is a film with plenty of “cool” factor, and you should give it a shot.

Surprisingly cool action flick from the director of Taken and From Paris With Love, Pierre Morel, District 13 (retitled District B13 in some markets, due to the “b” referring to the French use of the word “Banlieue” to designate a suburb) features the amazing art of “free running”, or as it’s known in France, Parkour, as it’s centrepiece, a concept which was showcased at the beginning of recent Bond flick Casino Royale. Initially, I thought a film with this as its main audience draw might seem a tenuous way to make a film, but amazingly (for me), it works! Filmed in Paris, in French (subtitles for those of you who can’t speak French!) and with a slick, high gloss production ethic, District 13 is one of those films you never hear of except through word of mouth, and generally enjoy in spite of yourself. So it is with great pleasure that I regale you with the beauty that is this film.

Filmed in 2004, and set in 2010, District 13 features an somewhat apocalyptic look at Paris in the “near” future. Society has decayed, and local slums have arisen, leading the government of the time to wall off entire districts, the most infamous of which is the titular District 13. Local District 13 lad Leïto (David Belle), a good guy who lives in the drug-ridden slum with his sister, finds himself mixed up with drug lord Taha (Bibi Naceri), a nasty piece of work who wants to control the district so he can increase his supply of illicit drugs. However, when Leïto steals a shipment of drugs from Taha’s henchmen, and destroys it, Taha kidnaps Leïto’s sister and holds her to ransom. Leïto, of course, swings in to rescue her, and almost does, before being double-crossed by besieged (and crooked) cops who have little interest in apprehending the drug baron. Outside B13, undercover cop Damien (Cyril Raffaelli, whose work we’ve seen before in Luc Besson produced films such as The Transporter, Kiss of the Dragon and The Messenger, as well as Hollywood backed cinema like Ronin and Live Free of Die Hard) makes an arrest on a high profile drug lord himself, and is seconded by a powerful politician to go undercover into B13 to disarm a stolen neutron bomb. Leïto, currently in prison due to killing a corrupt police officer (who handed his sister over to Taha to escape a confrontation earlier in the film) is supposed to be Damien’s partner, but the two distrust each other initially. Gradually, though, mutual hatred of Taha brings them to work together, to rescue Leito’s sister, and stop the bomb from exploding.

District 13 doesn’t dwell on character development: the characters of Damien, Leïto, Taha and the others are all generic stock good-guy/bad-guy types made famous in other films. You’ve got your local hero guy trying to do the right thing but not having the legal power to do so, then there’s the square jawed cop who has to buck authority a little to get the job done, the slimy, fur-coat wearing drug lord with a thousand henchmen (none of whom are competent at all), and of course the thick headed, gun-toting 2IC henchman who tries hard to accomplish what Taha asks, but never quite can. These character have appeared a thousand times in other films, but director Morel doesn’t care. These characters are simply a means to an end. And that end is to showcase the stunningly cool art of free running, in which this film succeeds brilliantly. The stunts, the action sequences, the super-slick editing and razor sharp production values overcome the inherent story limitations of poor characterisation and average (over)acting, to deliver a film that’s big on thrills and small on intellect. Some films try and accommodate both in their structure, and more often than not, fail to do so at all. But Morel strips away the characters enough so that the film’s tone and narrative hook isn’t about them; heck, the small matter of a soon-to-explode neutron bomb is relegated to second place behind the ballsy, sweaty palmed stunt-work. Gunfire and car chases aside, the main stars of the film are most certainly Belle and Raffaelli; their prowess at free running and utilising their environs to jump, swing, leap and fling themselves across the screen in all manner of ways is superbly filmed and choreographed. It’s tense, exciting and utterly thrilling. If you thought that opening chase sequence in Casino Royale was cool, you need to check this film out.

The actors all know what’s going on, and none of them try and evolve their character beyond the thinly developed script. In fact, this film is almost (I reiterate, almost) so predictable you can see what’s going to happen about ten minutes before it does. Which I’d normally go to town on as a problem with the film: if in fact the film bothered to even try and correct this oversight it’d be applauded more often than not. But Morel knows his audience isn’t here to see great acting, no, they’re here to see people perform amazing feats of acrobatics and endurance, and lets rip with an almighty directorial frenzy. There’s gunplay, some terrific scene stealing dialogue (as well as some genuinely dreadful dialogue, I must admit) and the production value on this film is obviously high. The action sequences are marvellously staged, a cross between the Bourne Ultimatum frenzy and the slick, widescreen scope of some earlier Asian martial arts flicks; both Belle and Raffaelli move so quick at times you may find it hard to figure out what’s actually going on. Morel pulls out all the camera tricks he knows, including a faux bullet-time shot, to enhance the story and bedazzle the audience.He keeps the plot logic problems to a blessed minimum, or at least passes over them so quickly you don’t have time to mutter “wait, how’d he know that?” in disbelief, before moving onto the next sequence.

I used the term “surprisingly” in my opening sentence, you might notice, because I want to reiterate that I enjoyed this film a lot more than I probably should have. With all that you can find to criticize this film on, there’s a tonne that will make you smile with the euphoric glee of encountering a film that so totally baffles you as to why it works, you simply sit there stunned. I’ve never been so enthralled with such a dismally scripted film as I was with this, because for all its faults, District 13 has style and testosterone to spare. Its slick, stylish sheen makes the slam-bang action sequences seem somewhat fantastical, and if you look and harder than mere superficiality at the film as a whole, you’ll find it’s riddled with inconsistency in both plot and character; it doesn’t matter.

I enjoyed District 13, a lot more than I expected. It’s not an intelligent film, not by a long shot. But it’s definitely entertaining. If you ever get the chance to watch this film on DVD or on TV, it’s worth at least one look. Genuinely fun, District 13 is a flat-out gem.