Second verse, same as the first. The sequel to the cult favourite, The Boondock Saints, starring much of the original cast and original director troy Duffy, All Saints Day represents one of those films that sounded like a great idea at the time, but never makes it across the line as a good film. Duffy has crafted a film that’s almost identical to the original, with a rag-tag sidekick and copious slo-mo gunfights, “banter” infused with plenty of bad language, and a plot that mirrors the original film in so many ways it’s amazing Duffy didn’t also include a scene involving a cat being killed.

I, along with many others, have been awaiting the sequel to The Boondock Saints for years. The anticipation that the return of the MacManus brothers would bring with it another heady, super-cool action masterpiece was so high, that perhaps Duffy could never hope to achieve success with this film. A little like the Star Wars prequels, All Saints Day takes everything that was good about the original film and cornholes it into little more that a rip-off. At least if Duffy is copying anyone, it’s himself.

The gang is back. Nice Reservoir Dogs homage here…

All Saints Day begins with the murder of a local Boston priest, which brings the brothers back to the city from their hideout in Ireland. It seems the son of the last Mafia don of Boston, Yakavetta, has himself become a powerful crime figure in the city, and so the MacManus boys (Neil Patrick Flanery & Norman Reedus) decide to take him out in order to discover who killed the priest. But Yakavetta Jr isn’t the only one they have to sort out: a mysterious new threat has arisen, and appears hell bent on a confrontation with Noah, the brother’s notoriously psychopathic father (Billy Connolly). When Murphy and Connor travel back to Boston, they encounter a crazy fighting machine known as Romeo (Clifton Collins, in snarling, teeth baring form) who joins them as they go up against the Mob. Also returning to the fray are local detectives Dolly, Duffy and Greenly (from the previous film), as well as Agent Smeckers protogè, Agent Eunice Bloom (Julie Benz), who appears not in the least twice as crazy as Smecker was.

According to the story, after the events in the first film, the brothers have been granted special protection from a section of the FBI, and Bloom appears to ensure that the Brothers are not caught and prosecuted, since their actions take them above and beyond the law. The three detectives assigned to the case are desperate not be linked to assisting the brothers in their execution of Yakavetta Snr., and so work against Bloom to cover their tracks, even though essentially they’re on the same team.

One of the bright spots in the film is the back-story afforded to Connolly’s character, Noah, as we begin to see his past and what made him the terrifying individual he is. We learn how he came to be the driven, malevolent man he is, and what drives him. Problem is, this flashback storyline links into the films finale, and about half way along the connection can be made, spoiling the “grand reveal” at the end. Duffy simply isn’t clever enough with his scripting to hide the identity of the kingpin of crime is who’s pulling all the strings. Then again, All Saints Day isn’t a subtle film by any stretch. 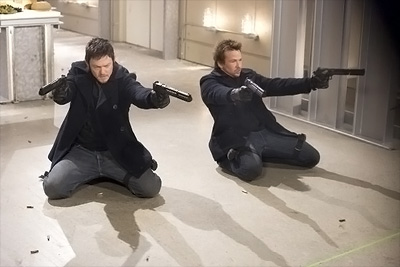 In fact, the film is so utterly devoid of real emotion and heart that it simply sinks under the weight of it’s self-indulgent nature. At least the first film had the balls to wink at the audience occasionally: here, the film is played as straight as possible, a lack of fourth wall humour that generates almost no empathy. The characters are all badly written this time around, and both Flanery and Reedus work hard against a script that gives them nothing new to say. Connolly simply glowers his way through the film, a one-note performance that deviates little from his dialogue-free moments in the first film. Clifton Collins, as the replacement for the now deceased Rocco (from film one) is little more than the comedy relief, even if he lacks the warmth David Della Rocco infused his character with the first time round. Rocco appears again in a cool dream sequence, and in this moment you can tell Duffy probably regrets killing the character off in the first place: Rocco is one of the best sidekick characters ever invented, and All Saints Day misses his presence.

Julie Benz (who appeared in the TV show Dexter, as well as with Stallone in Rambo), while certainly pretty decent an actress, is no Willem Dafoe. Her role of Eunice Bloom is meant to parallel Dafoe’s Smecker, and although definitely as crazy as her progenitor, is nowhere near as likeable. Benz does a good job, but the material she’s given is appallingly written. Judd Nelson, as the young (and paranoid) Yakavetta, is pretty solid, I have to admit, and his scenes are genuinely entertaining. Peter Fonda, appearing towards the films’ conclusion, appears devoid of life, his performance obviously taken from a pile of dead wood somewhere.

Overall, the cast do a great job with the limited material they’re given, and the direction from Duffy. It’s this direction which made the original film such a bizarre mix of comedy and action, and yet doesn’t gel properly here. The obvious self-referencing of the first film, coupled with the “same for same” character mix (Romeo = Rocco, Bloom = Smecker, Yakaveta = Yakavetta etc) does nothing to move these character anywhere new, simply recycling the same stunts and dialogue in what I can only describe as a piss-poor sequel in almost every conceivable narrative way. A lot like Guy Ritchie, who appears stuck in his Lock, Stock/Snatch film-making style, Troy Duffy lacks the creative nous to recognize that in order to make an effective sequel, you can’t simply recycle the ideas and concepts that made the original great. You have to develop them, enlarge them, take them in a different direction. Duffy, doesn’t do this. He takes his characters and simply gives them more of the same to do. 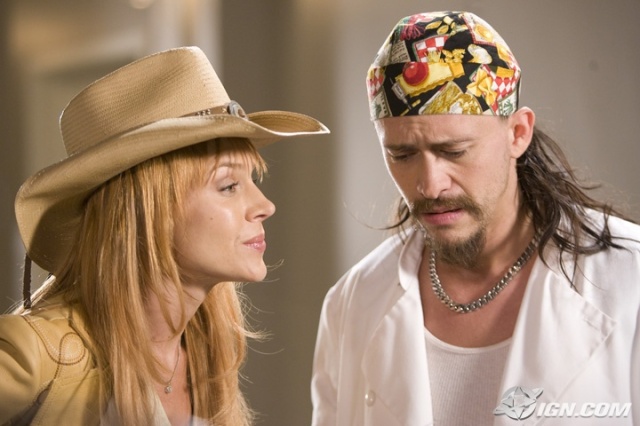 The single caveat with the story, as I see it, is the “twist” at the end. Without giving it away, the films finale is devoid of anything resembling logic and character development. There is a scene between Connolly and Fonda, in which they “discuss” their history and potential futures, which seems forced into the film like a badly written school play. Nonsensical, illogical and an utter disappointment to an otherwise mediocre film, Duffy comes undone at the final hurdle. Not even a wonderful cameo at the films finale can save it. The action, such as it is, seems forced and fake; unlike the wonderful exuberance of the original film, All Saints Day lacks energy in it’s most energetic moments, which effectively ruins the momentum of the movie. Ill-defined character development also prevents us from attaching emotionally with any of the characters, so what we’re seeing is simply a bunch of unlikeable thugs cavorting across the screen. The two leads, Flanery and Reedus, are enjoyable but completely unmemorable, perhaps due to Duffy trying to shoehorn in as much carnage and crass thematic material as he can. Overkill on this is what eventually brings All Saints Day to its knees.

The film is ostensibly a great little action piece, and I guess at a certain level is enjoyable if only to see these characters go round again. But if you’re looking for anything intelligent or thoughtful from this Boondock reprise, you’ll be sadly let down. For all it’s sturm und drang, it’s a molehill out of a mountain. And a woeful attempt to capitalize on the first films’ cultish success.