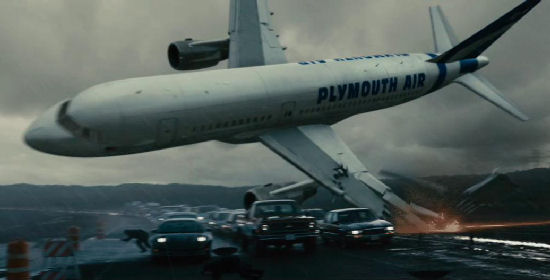 Director : Alex Proyas
Cast : Nicolas Cage, Rose Bryne, Chandler Canterbury, Lara Robinson, Nadia Townsend, Ben Mendelsohn, Alan Hopgood, Beinta Collings, Adrienne Pickering, Liam Hemsworth.
Year Of release : 2009
Length : 120 Minutes
Synopsis: When a piece of paper is uncovered that can predict major catastrophes, one man must seek to uncover the knowledge behind it, and what it means for the fate of mankind. In other words, we’re screwed.
Review : The apocalypse is approaching. Trust us to get Nic Cage as our only saviour. Ultimately fruitless, Knowing is Aussie director Alex Proyas’s first major misstep in cinema. A great opening stanza is undone by a truly ham-fisted ending.

Okay, I’ll bite. Nic Cage’s presence in a film is almost a kiss of death. How he’s gone from stratosphere busting super-stardom and Oscar winning ingenue, to appearing in mish-mash crap like Ghost Rider and now, The Knowing. Alex Proyas, the director such awesome acclaimed fare like Dark City and I Robot, has finally put a foot wrong.  Knowing is a glum, conceited affair riddled with lacklustre performances and half-baked concepts; and one of the silliest endings I’ve seen in a very long time.

To say the film is complete garbage is to do it a disservice; Knowing is not that bad, overall. But some of Proyas’s choices as director leave a lot to be desired. And some of them undo any of the good work that Proyas and his team have done to get this film into the mainstream. Casting Nic Cage is the first big mistake. I’m sorry, but the man looks like he’s perpetually depressed, and often, his acting reflects this. As an Oscar winner, you’d think his range would be a little wider. Nope, it’s the single-note Cage again, the same performance he has done in every film since the halcyon days of Face/Off, his last truly awesome movie.

The films premise is simple, if a little silly. A magic piece of paper is removed from a Time Capsule at a local school, and apparently has predicted major catastrophes throughout history (it was written some 50 years prior, according to the film) and still has a couple to go. Cage, as some kind of mathematical genius (aren’t they all?) decodes the numbers on the paper, and decides to try and stop the oncoming catastrophes from occuring. Ultimately, though, as in most sci-fi films, the hero eventually comes to learn that time cannot be changed by screaming at the oncoming tide.

The fundamental issue I have with Knowing is just how silly the final revelation is. The initial period of the film, with Cage doing his best “please believe me even though I know I sound insane” shtick throughout, is actually pretty good. Aussie actress Rose Byrne gives us an unremarkable turn as the granddaughter of the girl who write the mysterious fortune-telling paper, and her connection to Cage (both romantically and platonically) is tenuous at best. Both leads try their best to elevate a rather humdrum script beyond it’s roots; try and fail. Regardless of how much style and class Proyas brings to the film, he’s unable to generate any real emotional connection with the viewer, mainly due to an increasingly sloppy script. The beginning is excellent: spooky, tense and well edited. The middle of the film tends to sag under it’s own weight, as the key cast begin to get more frantic in the race to save the world. And the ending blows all that away.

I’m not into spoilers here at fernbyfilms.com. We don’t like to give away key plot developments, for those who haven’t seen the film to enjoy the surprise. But Knowing’s ending staggers belief. Without giving it away, it’s probably the single most disappointing ending to a well set-up film we’ve seen in a while. The revelation of the root cause of Knowing’s key conceit is lumped upon us like a bad b-movie subplot. Admittedly, the effects in Knowing only get better as the film becomes more sci-fi and less sci-fact; Proyas’ magnificent closing moments on Earth are simply devastating to witness, even if the emotional content rings hollow. Also of particular note: the trailer-featured air-plane crash, and a stunning subway train derailment, are key moments of brilliance in an otherwise generic apocalypse flick.

I guess what it all means is that Knowing is an opportunity missed, which is kind of ironic considering the theme of the film. Proyas’ style is undeniably cool, and the man knows how to shoot a good looking film. But here he’s let down badly by both misguided casting, and a script devoid of decent characterisation. The dialogue is fairly generic,  a mix of X-Files-esque techno-babble and soap opera pronouncements. Cage himself delivers a risible performance, only barely scraping the surface of what he could have achieved in this film. The effects are excellent, the music and production values top notch. But the story itself, and the Close Encounters riff it encompasses, is simply bad cinema.

On watching this film, I can recommend it only as a curiosity, and only for fans of Proyas. Nic Cage has fallen a long way from the top of the heap, and it’s sad to watch the gradual disintegration of a career that was sub-orbital at one point.  There’s not too many major films these days that would risk having Cage in them… in much the same way Nicole Kidman is the kiss of death in the films she’s in.

Knowing isn’t great storytelling, but it’s good enough for a time-wasting Sunday afternoon in front of the TV.