Director : Stuart Baird
Cast : Patrick Stewart, Jonathan Frakes, Brent Spiner, Tom Hardy, Ron Perlman, Dina Meyer, Whoopi Goldberg, Marina Sirtis, Michael Dorn, Gates McFadden, LeVar Burton, John Berg, Kate Mulgrew, Shannon Cochran, Jude Cicolella, Alan Dale, Wil Wheaton, Majel Barrett, Bryan Singer.
Length : 116 Minutes
Synopsis: Captain Picard and the Enterprise crew must battle a scheming, vengeful clone of the famed Captain before he can destroy the Earth and build a new Romulan Empire. One of the Enterprise crew must make a choice between life and death to stop him.
Review : Action packed, if flawed, Trek film, and the final of the Next Gen series, Nemesis is a fitting finale to the now stagnating Trek franchise. Stuart Baird directs this film with an eye for action and style, something the Trek universe could have badly done with about six films ago. Nevertheless, this is a dramatic, dark and melancholy finale to the original Trek Universe film series.

Generally unliked by hard-core Trek fans, Nemesis remains perhaps the second favourite Generations era film for me, behind only First Contact. Directed by Stuart Baird, who also helmed such successes as Executive Decision and US Marshals, Nemesis represents the closing of a chapter in Trek history, the final film in the Picard-era series. Now, a lot of criticism was levelled at the film for trying to urbanise it, to gritty it up a little for action-audiences, Nemesis is most definitely a slam-bang thrillride (in Trek style, of course) without being slavish to the conventions the franchise had, until then, become frustratingly thrown by. Baird managed to straddle the fine line between outright action, and a genuinely exciting (if somewhat baffling) Trek film, to give us the finale in the Next Generation‘s efforts on the big screen. 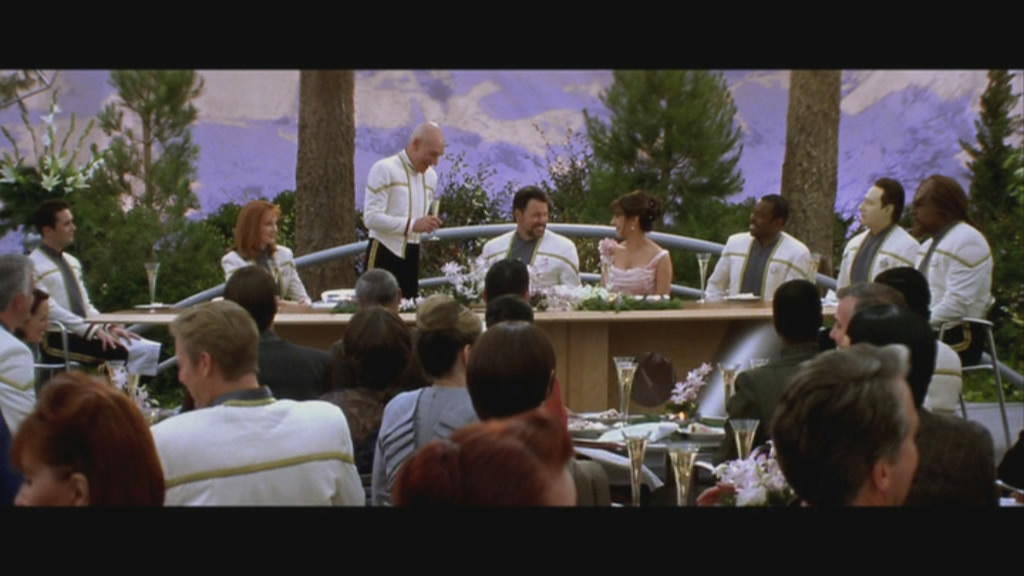 Picard toasted the Groom, but he kept the photos of the naked bride hidden… for now.

Our story takes us to Romulus, stronghold of one of Starfleet’s former adversaries, now uncomfortable friends, where we meet Shinzon, a Reman worker who has a particular stone in his shoe over Captain Picard. The Remans, a sub-class of Romulans, have been the worker drones for as long as they can remember, and Shinzon has managed to steal for himself an almighty Reman battle cruiser named the Scimitar. Shinzon pertains to be friendly to the Federation, although this façade is soon uncovered by Captain Picard and the crew of the Enterprise. It seems Shinzon wants to destroy both Earth and Picard, using a dangerous and unstable form of energy, which (as shown in the films prologue) is capable of disintegrating almost all forms of flesh. But Shinzon carries with him another secret, which makes him particularly dangerous to Captain Picard. It seems Shinzon is a direct clone of the famed Captain, and he is somewhat of a match for Picard due to being able to think and act like him as well. When Shinzon makes a play for Earth, to detonate his radiation weapon, Picard and the Enterprise crew must use all their guile and skill to defeat him.

Tom Hardy is a snarling, defiant, arrogant Shinzon, the films central villain. His performance is over-the-top, a little wooden for my liking and detracts from the emotional impact Picard has as his genetic father. Not having seen Hardy in anything else makes me wonder if he is capable of a truly emotional performance, other than his grimacing, spittle-producing antithesis of Picard. I’m not sure, but since the film revolves completely around Shinzon’s motivation and gravitas, having a performance as woefully inadequate, and to be honest, pantomime-ish as this one, it hamstrings whatever point screenwriter John Logan was trying to make. And it’s this one flaw in Nemesis that prevents it from achieving greatness within the Trek franchise. 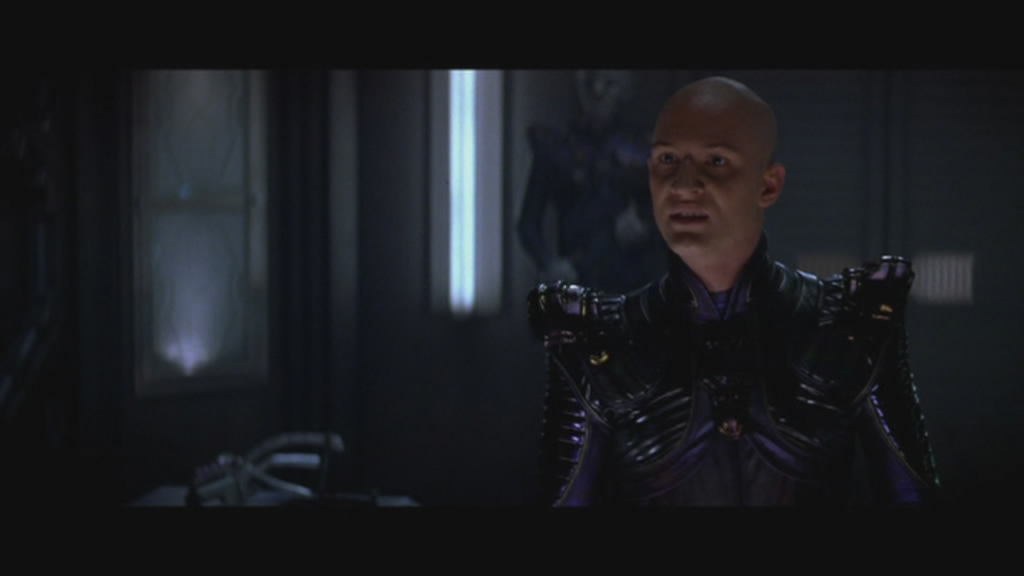 I dress in back, I glare, I spit abuse at you, I have the power to destroy the universe… why are you not afraid of me????

The rest of the film is genuinely decent, with the entire Next Gen cast returning for their last hurrah. As usual, Patrick Stewart (as Picard) and Brent Spiner (as Cmdr Data) get the bulk of the character arc in Nemesis, aside from Shinzon, and the much talked about finale is a real stunner. Stunning because you’re neither expecting it, nor hoping it’s all a dream or something similar. It involves the death of a major character in the series, and it’s a noble, heroic death. For those who haven’t seen it, I will not spoil it here, but suffice to say, if you go into this film expecting an untarnished cast lineup to walk out the other end, you’re in for a shock. The point of the film builds up to this moment, and the final sequence involving said characters is poignant, if a little perfunctory in it’s execution. The great thing about the death of a major character is that in this case, it’s final. Too often in sci-fi we have characters returning from a supposed death by some fantastical means; here, that character is dead, although a little coda indicates that his/her memory will live on. 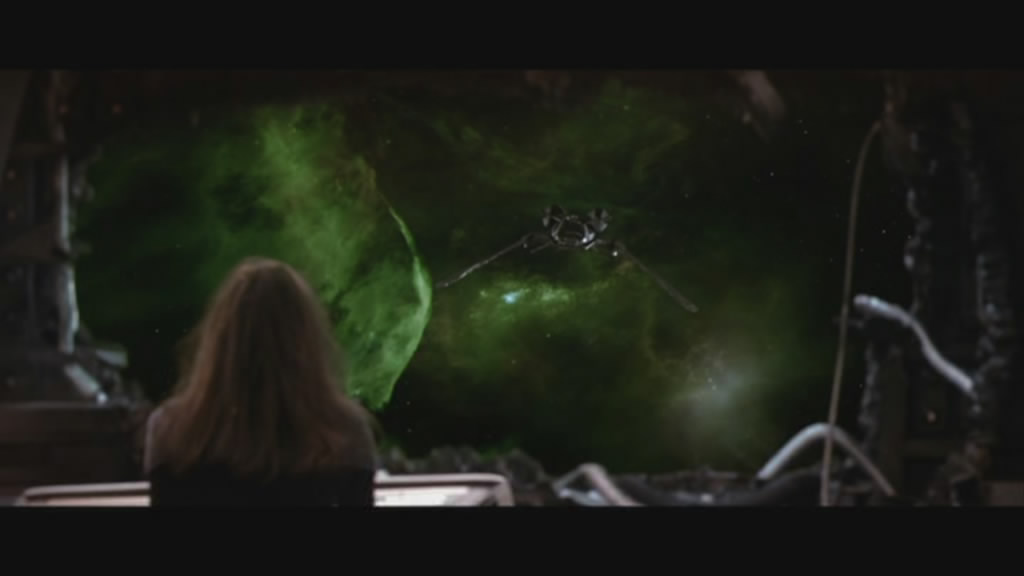 As Jackie watched, the enemy watched right back.

We also get to see (finally!) the wedding of long time lovers Commander Riker and Deanna Troi, whose nuptials at the films opening give away nothing as to the darker nature of this movie. Indeed, once Shinzon arrives on the scene, the film turns into a somewhat darker, serious Trek than we’ve come to expect. In both Generations, First Contact and Insurrection, there was a sense of fun and a gleam in the eye throughout; here, that glint is replaced by a steely, no bullshit glare. Screenwriter John Logan has infused his Trek effort with a wry sarcasm, a sense of gritty, dirty masochism: a futile conflict seems to be on the cards as Picard and his direct opposite go head to head in a battle of wills. I can understand the possible conflicts Logan must have played with by pitting the stoic, heroic Captain up against a direct clone of himself, and it must have seemed like a great idea. Problem is, the narrative leads us nowhere in terms of Picard’s growth as a character. Shinzon is merely a nasty piece of work, the script unable to convey just how dangerous he can be as Picard’s opposite. Indeed, Picard seems all too able to confront and defeat Shinzon, compared to battles he’s had before around villains with half the hype. You’d think that a man who is cloned from Picard would be a pretty invincible adversary, considering he has all your genetic traits: but Shinzon isn’t Picard, not really. He’s a mere shell, a wannabe Picard-esque villain, and his ultimate plan and fate seems quite laughable when you look at it objectively. Destroy the world? Been done sunshine. 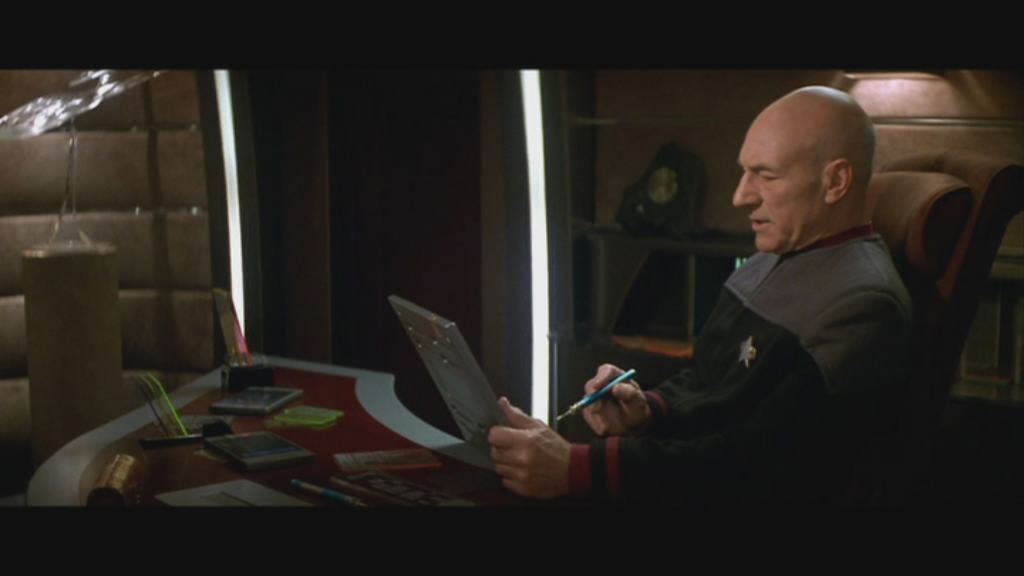 The Captain was having trouble with Google Earth….

Generally, the film is directed with brutal efficiency from Baird. He’s neither flourished or inept; he gives the script the energy it requires and the characters the direction they need. With the exception of Hardy, nobody in the cast puts a foot wrong, and Baird manages to even leave a lot of the Trek-isms alone to concentrate on the action and darkness. Indeed, Baird manages to evoke a more character driven Enterprise crew this time about, with almost all the cast involved somehow in Picards ambiguous clone-war. Worf, Troi, Crusher and LaForge all come into their own in this film, adding to the genuinely moving finale by building upon their characters and drawing the audience into their plight. Bairds editing is ambitious, an action-film style mixed with the more traditional Trek method, making the more exciting sequences a whole lot more involving for the viewer. Baird relaxes the Trek-isms enough to allow a non-Trekkie to enjoy it, although essentially, a non-Trekkie probably won’t watch this film anyway. Baird’s sense of occasion at the grandeur and nobility of space travel is minimal, opting instead for the grim, scary, death-at-any-moment mentality to which, until now, Trek seems to have escaped. Still, the film bubbles along nicely with a renewed sense of energy and ambition.

Technically, the work on Nemesis is superb. Musically, the score from the always wonderful Jerry Goldsmith is sublime, a traditional Trek score interspersed with both darkness and energy, a more bombastic Trek score than in recent previous films. You can really sense a growth in Goldsmiths Trek scores between each of the films he worked on, and while Insurrection and First Contact were more heroic scores, this time, there’s a sense of finality to Goldsmiths work, a kind of fate acompli mentality that permeates the film to the very end. The last sequence, especially with the coda between Picard and a duplicate Data on board the Enterprise, is among the best score work Goldsmith has ever done. The effects, meanwhile, are first rate, and again we see the partial destruction of the Enterprise for the good of the Galaxy, as Shinzon’s ship and our favourite Starfleet vessel coming nose to nose in a spectacular game of chicken. While Trek espouses a potential pathway for human society to grow, the limitations of actual space travel appear reduced in the name of a really cool action sequence; it’s funny, but like Star Wars, you never question the science. It’s not worth it. 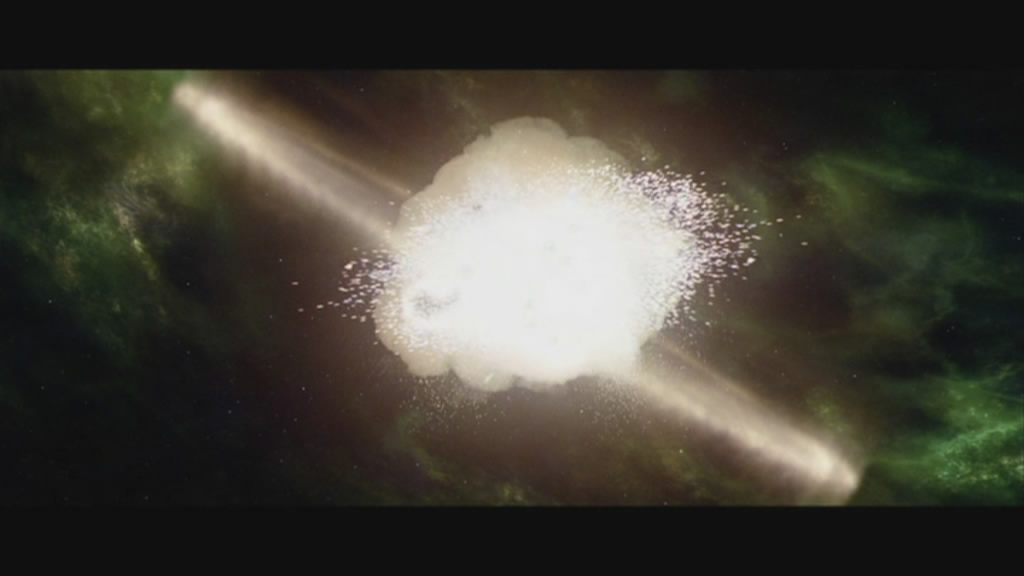 Finally, Paramount knew what they had to do to get JJ Abrams to direct a Trek film!

Overall, there’s a great deal to like about Star Trek: Nemesis. The film is well directed, well acted (except for Hardy’s performance) and produced as a bottler of an action film. Interestingly, it was mauled by both critics and fans alike as being one of the weaker and less well received Trek films, although it’s hard to see why. Standing in the shadow of the acclaimed First Contact, Nemesis does indeed come up short, but as far as Trek films go, it’s one of the better ones; an exciting, action packed and ambitious Trek entry that brings to a close the Picard era of films.