Director : David Carson
Cast : Patrick Stewart, William Shatner, Jonathan Frakes, Brent Spiner, Malcolm McDowell, Mirina Sirtis, Michael Dorn, Gates McFadden, LeVar Burton, Alan Ruck, Jaqueline Kim, Barbara March, Gwynyth Walsh, Patti Yustake, Whoopi Goldberg.
Year Of Release :  118 Minutes
Length : 113 Minutes
Synopsis: The Next Generation crew assemble to stop a plan to wipe out half the cosmos by a renegade scientist, with the help of an unlikely source: a once-thought-dead Captain Kirk.
Review : Mild, innocuous outing for the Next Gen crew, being handed the baton (in a way) by the outgoing original Trek team, particularly William Shatner. Should have been iconic, instead is rendered somewhat mediocre by a poor storyline and a hodgepodge of Trek-lore which would baffle any newcomers to the franchise. The cast give their all, but an obtuse screenplay renders this adventure an opportunity missed.

With the enormous success of re-defined franchise entry Star Trek: The Next Generation, giving us Captain Picard, Commander Riker, and Lt Commander Data, it would go without saying that eventually Paramount studios would get around to big-screening their largest property. In a kind of “pass the baton” affair, Generations is the initial foray onto the big screen for the Next Generation Trek crew, and while many had hoped it would revitalise the film side of the Trek franchise, it is ultimately regarded by many fans as a bit of a flop. Since the film was released in 1994, Generations became the defining moment in the career of the legendary Captain Kirk, in which he finally succumbed to undertake that last, great journey we all must eventually do; death. Yes, in Generations, Captain Kirk dies. Bites it. Buys the farm. Kicks the bucket. You’d expect nothing less of a fitting finale than for Kirk to be killed in combat, or flying the Enterprise into the heart of a supernova, somehow saving not only the Federation but the entire Universe with it. Unfortunately for those wishing for a heroic send-off, Kirk is slain by a no-name criminal in a canyon on some desolate moon, a far from inspiring moment that leaves a bitter, hollow, taste in your mouth. 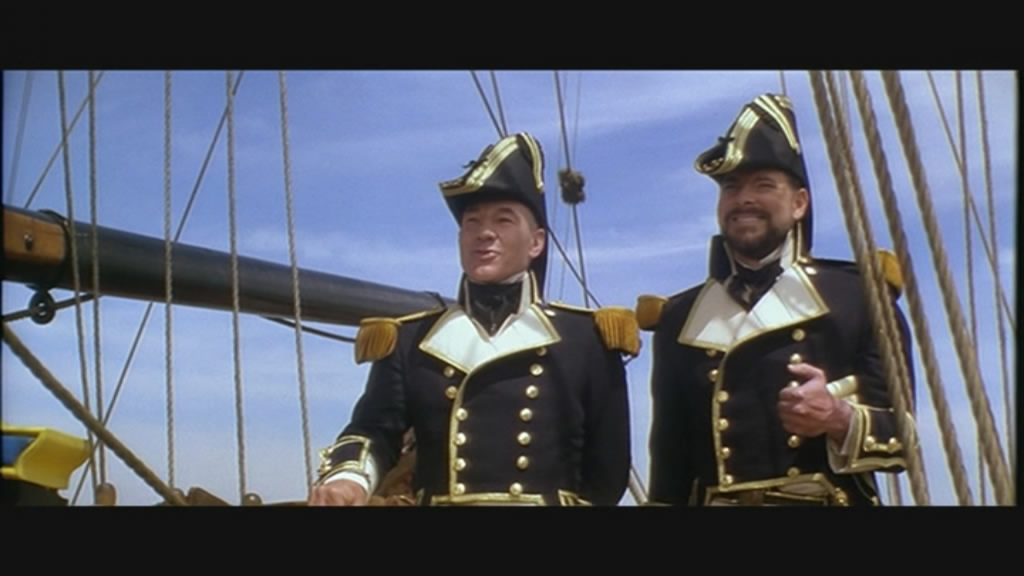 The film begins so promisingly, with Kirk, Chekov and Scotty doing the rounds of a new Enterprise, before she begins her maiden voyage under the command of a new Captain. The humour, the sparkle, the gentle nod to past legends; it’s all there, before being torn asunder by a bizarre energy wave which seems to kill Kirk as he saves the vessel. However, we soon discover Kirk isn’t dead, he’s merely been transported into the future, a future now taken up by Captain Picard and his crew of the Enterprise D, lifted straight from the small screen and given a lavish, anamorphic scope to play with. Picard, abruptly bereaved with the death of his only nephew, finds himself seconded to rescue the inhabitants of a space station, among the inhabitants is the renegade scientist Soran, who hints at a dastardly plot within his frantic babbling. Indeed, Soran has a scheme that will soon see the end of millions of lives, as he seeks to control the deadly wave of energy as it arcs through the galaxy.

Kirk often wondered what people said about him behind his back….

Generations does not suffer from a lack of effort. It doesn’t suffer from a lack of name stars and quality performances. Each of the cast give their all, and the production values on this film are as you’d expect from a flagship release from Paramount. So why, oh why, does Generations manage to stifle its sense of grandeur with a haze of mediocrity? The story, which feels a lot like a padded TV episode from the series, seems decidedly dull and lacking in spark, a kineticism which the film so sorely needs. Patrick Stewart somehow bores the audience as Picard, whereas on TV he’s brilliant. Only when Kirk arrives on the scene, his older space-dawg mentality throwing the Generations crew for a loop, does the film really pick up it’s stride; it’s just that it takes an eternity to do so. 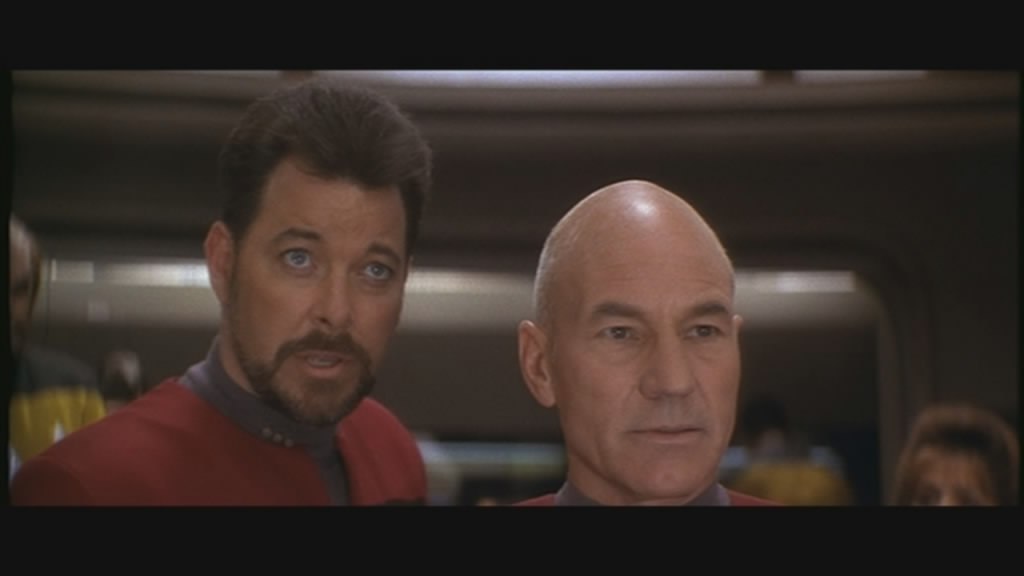 I swear if you touch my ass again I’ll beam you into outer space!

The main problem I found with Generations is simply this: the film lacks the awe-inspiring chutzpah of previous Trek entries, mainly due to a thoroughly insipid plot, scenes that play like bad episodes of the TV version, and a villain so overplayed by the normally great Malcolm McDowell that it’s almost cartoonish in the execution. In fact, the films “gripping” finale, in which Kirk and scientist Soran battle it out over a chasm (with Picard running about trying to help), the fate of the galaxy in the balance, simply lacks any kind of excitement. Rather than a blowout of effects and thrills and spills, we’re left with a barely coherent story thrust upon us like somebody was let into the Trek history museum and told to cobble something together out of old, rejected episodes. The Next Generation cast, all undoubtedly at the peak of their fame, are given little to do beyond what they got up to on the TV show, and it shows here. It’s a pity, because with the scope of the films canvas, the franchise could have been kicked up a notch with a truly exciting outing. Instead, we get some badly written (and acted, McDowell) villain who lacks any connection with the audience, and seems for all the world written into the film as a singular plot device for the inevitable outcome. Had the Generation crew been able to really take hold of the film and get some meat onto the plot, this could have been a truly awesome Trek film, but the story seems mired in emotionless gorming to the studio executive who thinks that by simply putting a TV show on the big screen, and limiting them to a TV-like environment, then that will ensure the fan-base isn’t upset. Of course, the almighty fan-base don’t want to be upset, but neither do they want to be let down by a half-hearted storyline. You can almost feel the inadequacy of Carson’s direction in every frame, and considering he’s a director more known for his TV experience than a wide-screen film format, one could almost forgive him. But to approach a film in the same way you’d approach a TV show, is an act of restraint that will taint this film forever. 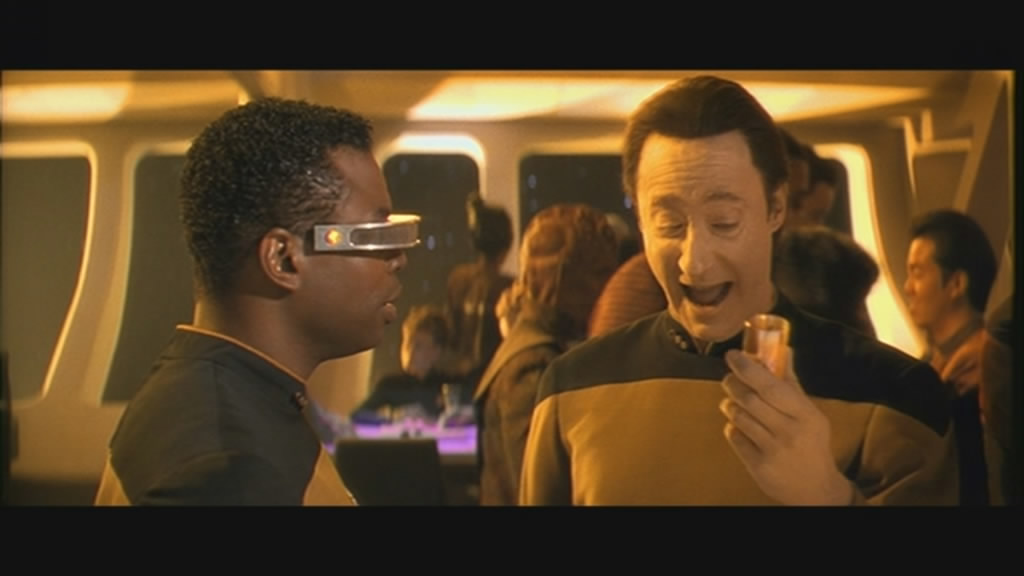 Man this stuff is WHACK!

I’d like to point the finger solely at Carson for his somewhat plain style of directing (admittedly, the film’s show-piece of the destruction of the Enterprise D is spectacular, but doesn’t go anywhere near recovering the film by that stage!) but I cannot. Blame must surely lie in this instance in the screenplay, by Ronald Moore and Brannon Braga, who were both alums of the TV series at the time. While it may have seemed like a great idea at the time to shoehorn Kirk into the film, and tip the hat to the previous film entries, in hindsight it probably wasn’t the best idea. Kirk’s braggart contrasts badly with the more reserved, calm platitudinous efforts of the Next Gen universe,and while I would normally give plaudits for attempting to do something like this in the Trek-iverse, in this instance it didn’t work. Shatner is all over this film, his eye glint and strongarm tactics akin to taking a bludgeon to a baby seal: the fish-out-of-water ethos of having Kirk mixed with Picard and Co somehow doesn’t quite gel. Perhaps it’s more the direction, but I tend to think it’s the fact that the audience find themselves watching almost two different films run concurrently. First, the familiar and laconic original Trek crew (or, part of them in any case) doing their usual shtick, and then the more recent Nex Gen team trying desperately to find themselves as feature film stars. Braga and Moore undoubtedly know their characters back to front, especially the Next Gen ones, but they seem unable, or unwilling, to take any real risks with their characters on a larger canvas. Only Patrick Stewart and the always delightful Brent Spiner make the most of their anamorphic transition to the big-screen, which is a direct result of both the chemistry the two have, and the dialogue they are given by the screenplay. But even Kirk’s lines feel forced, less natural than before, even with the obnoxious Shatnerisms being played out large once again. 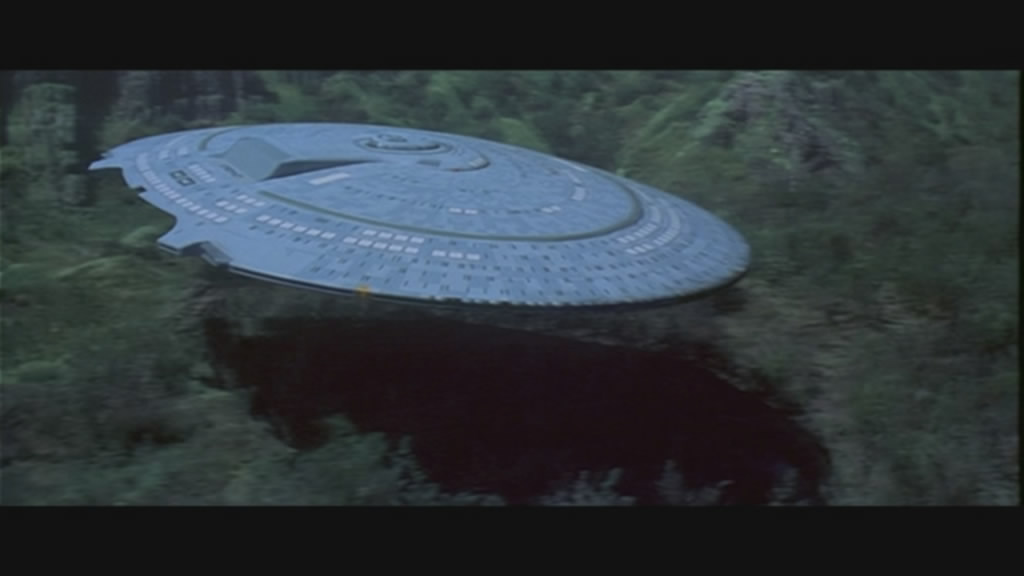 On the positive side, there is plenty to enjoy about this film if you don’t find the story all that exciting. Musically, the score by Dennis McCarthy, who is perhaps best known for his work throughout the Trek television franchise, is quite decent, particularly the opening credits, which is among my favourite themes written for Trek outside of Jerry Goldsmiths iconic masterpiece. The film uses McCarthy’s score well, even if at times it feels like he’s copied it from a template on how to write action/sci-fi scores he downloaded from the Internet. Soft and subtle as required, the film never beats a theme to death (something which the aforementioned Jerry Goldsmith was occasionally wont to do) and remains one of the more nuanced Trek scores I’ve heard yet. Of course, you won’t go far without discussing the special effects, something which I am quite sure Carson had dealt with before in his work on the TV show. The effects here are dated by the standards of the new millennium, however, they still hold up under scrutiny for the most part, particularly the scene involving the Enterprises’ saucer crash on a distant planet: the model work here is absolutely first rate. Generally, you’d be hard pressed to find anything to complain about in the effects department. 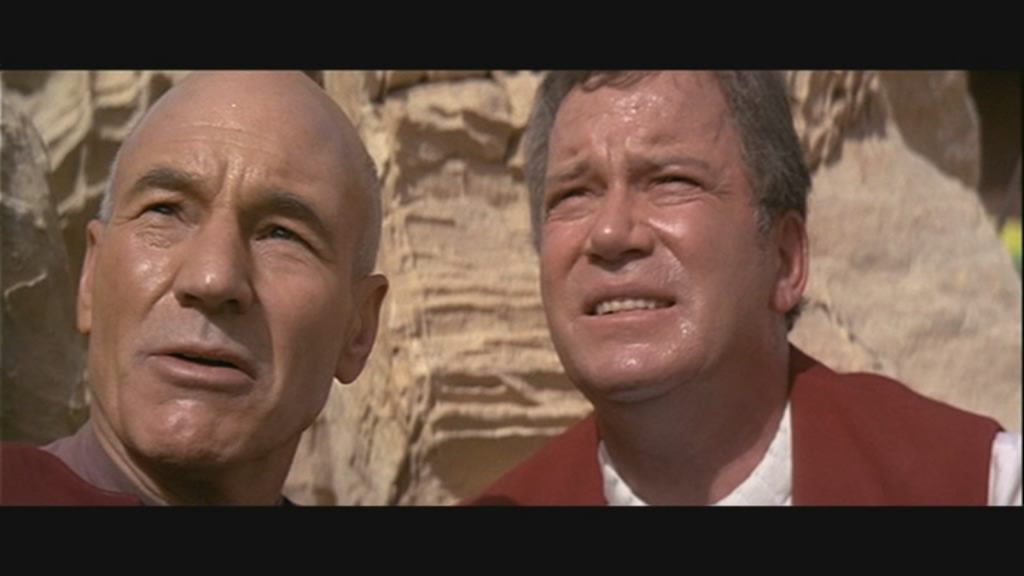 How and sweaty. Just the way Kirk liked it.

Ultimately, though Star Trek: Generations is a little bit of a lame duck, predominantly due to the reasons outlined above. If you’re a Trek newbie, you’ll approach this film with the caution forum chatter and fan-based emotion grants you. If you’re a non-Trek convert, then you can probably skip this and move on to First Contact, which is where the Next Gen team really hit their straps. Overall, a passing grade, but without distinction.