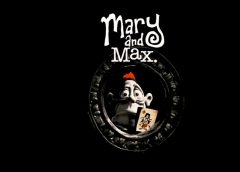 Local boy made good Adam Elliot has brought us a whimsical, beautiful, gorgeously simple film in Mary & Max. Made using the claymation animation method made famous by the Aardman Studios, Mary & Max was made right here in Australia and released back in 2008. Elliot came to prominence a few years back when he won an Oscar for directing the short film Harvey Crumpet, which also used the claymation style, in 2003. Since then, his time had been taken up producing this little gem of a film, which, while perhaps not as well known as Wallace & Gromit, has just as much warmth and depth as the British duo, and in fact is a vastly more emotional journey for an audience.

Mary, an 8 year old girl living in 1970’s Mount Waverley in Australia, sends a letter to a random person in America while waiting for her kleptomaniac mother to finish stealing envelopes at the post office. The letter arrives in the mailbox of Max Horovitz, an overweight, middle aged New Yorker who suffers from Asperger’s Syndrome. Max, who has panic attacks while reading Mary’s letters, becomes her pen-pal, since they are essentially both lonely souls pining for human contact they can appreciate. Mary’s family is utterly dysfunctional; her father engages in taxidermy as a hobby, and her mother is a sherry drinking, chain smoking thief, and not a very good role model. Mary’s other major issue is her poo coloured birthmark on her forehead, something which other children delight in abusing her over. Yes, Mary’s life is quite sad, although her communication with Max allows her to begin overcoming life’s little difficulties.

Max, meanwhile, attends his regular overeaters anonymous classes, watching his favourite TV show (which happens to be the same as Mary’s favourite show!) and eating chocolate hotdogs. Max lives alone, although he is accompanied through his life by his imaginary friend Mr Ravioli, as well as numerous short-lived goldfish and a housekeeper seemingly older than time itself.

I’ll admit I’d never heard of this film prior to Lisa bringing it home from the video store the other night. And when I looked at the cover, I distinctly remember screwing my nose up in “oh what B-grade rubbish have you brought home” style. I wasn’t looking forward to it. But the film is a genuinely excellent one, one of those small gems that creeps up on you when you’re not ready and amazes you at just how smart, entertaining and wonderful film can be. Mary & Max is a true delight, and while I could wax hysterical about the film all day, you simply need to check this undiscovered gem out.

Elliot’s story, which, according to the opening credit, is based upon a real one, is so simple, so elegant, it’s surprising the film runs as long as it does. Who’d think a film about pen pals would thrive and be as lovely as this? Mary, the young girl, is an every-woman character, the kind of childhood displayed that fantasy films often do: the unloved, loving girl-child who dreams of better things (including her wedding day) and yet, is stuck in a world filled (she thinks) with cruelty and sadness. Poor Mary often cries herself to sleep, her heartbreak mellowed somewhat by the friendship she strikes with somebody on the other side of the world. The boy who lives across the road, Nick Popodopolous, becomes her first crush (and love), a charming and heartbreaking side-story which eventually becomes a key plot twist in the films final act, and is voiced by a twangy Eric Bana. Max (pitch perfect vocals by Philip Seymour Hoffman), a strange-headed man with interesting peculiarities, is sad in his own way, as well as being accident/danger prone, and often his problems result in being incarcerated in various prisons and mental institutions throughout the films timeline, which effects Mary in ways he can’t fathom since she doesn’t get letters from him while he’s not home. The relationship between Mary and Max is strange, at first, although the kinship the two characters, and the time Elliot gives us to enjoy their bonding, is enough to hold this film together.

The film does begin quite slowly, which is a little unsettling at first, given the style of the film (narration from start to finish can be annoying if done badly: here, it’s done brilliantly!) and the way in which the story unfolds. Alternately sad and euphoric, Mary & Max does what many animated films fail to do these days: take you on a truly emotional journey. The way this film generates feelings in the viewer is hard to quantify, yet all the way along you tend to empathise with both these weird characters. Elliots dynamic script, coupled with the brilliant vocal performances of the key cast, allows us to percolate in the world in which the film is set and saturate ourselves with the mood, the tone and feeling the story provokes in us. I don’t think I’ve seen an animated film which has moved me emotionally so well before.

Technicallly, Mary & Max is superb to watch. the animation is genuinely jaw-dropping at times, the subtle nuances here match anything achieved in a CGI film, if not bettering them with the laconic stylings of the Aussie sense of humour. The visual palette of the film is almost monochromatic, a kind of 70’s film sensibility, with only the most tentative splashes of colour on emotional pivot points, similar in effect to Spielberg’s use of red in Schindlers List. The detail in the film, especially the wide shots of New York (an enormous model) and Lamington Lane in Mt Waverley is exceptional, this world has been stunningly brought to life. Yet it’s a caricature of reality, not a fully-fleshed carbon copy of the real places, and the fantasy of the film engenders a sense of wobbly, Far Side kind of aesthetic that’s a joy to see on screen. In fact, had Gary Larson been credited with the design of this film, I’d have not been surprised at all. (He wasn’t, the designer was Adam Elliot himself.) Max’s New York is starkly dark and depressing, matching the mood of Max throughout the film and giving us the dank, emotionally retarded feeling we need whenever we cross to Max in his spartan apartment. The look of the film does exactly what it should: transport us back in time and into the story, although rather than focusing on the ancillary stuff, the films colour scheme and tonal qualities enhance the story in a minimalist, utterly effective way.

Musically, the film is heartbreaking. The film uses no traditional score, instead relying on more common orchestral pieces to generate the required mood as the film progresses; that being said, Elliot uses music in the film sparingly, more often than not to either set a scene (establishing a change in location) or subtly evoke a mood (such as at Mary’s parents eventual funerals) or in the film’s dark, atmospheric final act. A version of  Que Sera Sera is used that, while being somewhat contrived and cliched, remains amazingly powerful in the context in which it’s used. It’s here that you may find yourself actually crying. And the final scene itself: simply heartbreaking in it’s representation of friendship and love.

I don’t really want to spoil this film for you by revealing too much of the plot, which means much of what I wanted to say will have to remain unsaid; since to explain key moments would be to spoil the enjoyment of discovering this film for the first time. Rather than dwell on story specifics, let’s just say that if you have a chance to watch Mary & Max, then can I urge you to do so with my highest possible recommendation. Altogether heartwarming and heartbreaking in equal measures, with an ending that could even make you cry with it’s un-saccharine non-sentimentality borne of simple friendship and understanding, Mary & Max is a visual, emotional delight.

What others are saying about Mary & Max:

Al over at The Bar None had this to say: “Mary and Max was beautifully tragic, tragically dark, darkly beautiful, beautifully sad, sadly gorgeous and gorgeously ugly.”

Will at Silver Emuslion raved about it too: “Mary and Max is a truly human, adult tale of two lonely characters and surprisingly it makes for one of the best animated films you’re ever likely to see.”

Nostra at My Film Views enjoyed it: “Its unique look, story and charming and sometimes dark story had me glued to the screen and I can understand why it’s in the IMDB top 250.”