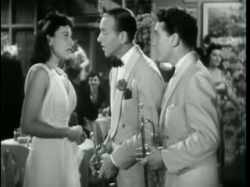 Director : HC Potter
Cast : Fred Astaire, Burgess Meredith, Paulette Goddard, Charles Butterworth, Artie Shaw
Year Of Release : 1940
Length : 80 Minutes
Synopsis: Two trumpeters vie for the attention of an attractive young lady by attempting to upstage each other at every opportunity. When she becomes the secretary for Artie Shaw, famed band leader of the era, they must fight even harder.
Review : Mediocre scripting cannot hamper the magic every time Fred Astaire arrives on screen. The camera just loves everything he does (even if the man himself once said Second Chorus was the worst film he’s ever done… I’d say that sentiment could go to Towering Inferno!) and he’s ably backed up by Burgess Meredith in fine comedic form. Paulette Goddard is solid as the female love interest, although this role isn’t meaty enough for her to get her comedy teeth into. Nope, it’s Astaires show pretty much, and if you throw in some awesomely cool talent behind the camera in the musical department, as well as a solid sense of direction from HC Potter, and Second Chorus is a sentimentally second-tier comedy film with a vibrant cast giving this story much needed chutzpah.

God bless the ABC. For ages now they’ve been running classic movies on their second digital channel here in Australia, and it’s a great chance to be exposed to films that you might not ordinarily see. Recently they screened this pearler of a film from Paramount, starring a very young Fred Astaire and Burgess Meredith, entitled Second Chorus, a comedic musical co-starring Paulette Goddard and big-band superstar Artie Shaw. Filmed in 1940, Second Chorus tells of two misfit college band trumpeters, Danny O’Neill (Astaire) and Hank Taylor (Meredith), who try to win over the affections of Ellen Miller (Goddard) when they spot her at one of their performances. Ellen, who is employed by a debt collection agency, uses her feminine charms to serve a summons notice to Danny about some costs for an encyclopedia he once purchased and never paid for. Both Danny and Hank arrive at the collection agency and swindle Ellen out of her job and into their employ, as their band secretary, a job that sees Ellen soon become defacto band manager.

Danny and Hank both try to further their employment with legendary band-leader Artie Shaw (who, funnily, plays himself throughout the film, a nice touch!), but end up themselves being swindled out of a secretary by the famed musician. With Ellen now effectively out of reach, both Danny and Hank come up with various plans to try and win her back, although throughout the film, it’s fairly obvious which of our leading men she’s going to end up with. Throw in the plot device of a Shaw-led concert, a doddery bottle-cap manufacturer (a wonderfully deadpan Charles Butterworth) bankrolling the show and a whole slew of wonderful cinematic treats for the interested viewer. The key musical motif, the song Love Of My life, was nominated for an Oscar for Best Song, and is a delightfully fitting (if somewhat belabored) theme for the film’s sense of fun. Astaire gets to do his thing, dancing up a storm during a few genuinely entertaining musical numbers, especially the grand finale, where he tap-dance-conducts Artie Shaw’s orchestra, winning the heart of his girl. Did I give away the ending? Yep, but you all knew that anyway, didn’t you. After all, this is Hollywood.

The films wit isn’t in it’s sparse script, which is a fairly try-hard imitation of a farcical, rapidfire delivery known through cinema of the thirties and forties. The script is actually fairly pedestrian, although Astaire and Meredith more than compensate with some wonderfully sparkling delivery. Their comic timing is impeccable, their gurning and mugging to the camera (especially from Meredith, who most younger folks might remember as the Penguin in the Batman TV series from the 60’s) is spot on, raising the value of this otherwise ordinary material. Scriptwriters Elaine Ryan and Ian McLellan Hunter seem to have figured out that they don’t need to write anything particularly funny, they just need to give Astaire and co a start, and the the screen talent have enough potential to do the rest. There are a few moments of genuinely ribald humour, a line from Astaire about being “all warmed up for a while now” is jaw-droppingly cool in it’s flippant, off-handed delivery, and Burgess Meredith’s slick dialogue delivery adds a sense of zest to his rather forgettable role.

Paulette Goddard, who would go on to marry her co-star Meredith four years later (in an ironic twist of fate considering their characters here don’t work out!) is workable as the love interest, and while she doesn’t compare to her cinematic contemporaries, like Bergman or Becall, she’s solid enough to stand with Astaire and bask in his limelight. Goddard would go on to receive an Oscar nomination a few years later for So Proudly We Hail!. Butterworth, meanwhile, who was a reasonably popular character actor at the time (and according to Wikipedia, is credited with the line “Why don’t you slip out of those wet clothes and into a dry martini?”, so for that he gets the thumbs up from me!) is a standout as the buffoonish, bumbling entrepreneur who is conned into backing a concert by Artie Shaw, a show which both Danny and Hank try and score jobs in. He isn’t given great material to work with, let’s face it, but what he does do is amusing enough to warrant applause. His scene with Meredith counting time to a metronome is hilarious: both actors know just how far to push it without going too over-the-top.

The direction from HC Potter, himself no stranger to comedy films, is testament to the limitations of technology at the time. The camera remains fairly disinvolved from the actors, the “stagey” style (which accompanies a lot of films from this era, since moving the camera wasn’t always easy to do) starting to loosen up during the energetic dance and musical numbers. There’s a lovely tracking shot towards the beginning, where Astaire and Meredith walk along a path musing with thoughts on their alternative employment post-college, which really brings the film to life: something the interior studio shots don’t quite manage. The cutaways and fades are a little jumpy, to be honest, which could have something to do with the quality of the print shown by the ABC. But generally the editing (by Jack Dennis, who worked on 1936’s The Last Of The Mohicans, The Flying Deuces with Laurel and Hardy, and director Potters documentary masterpiece, Victory Through Airpower, which to this day remains a defining moment in doco filmmaking) is razor sharp, with Potter tending to opt to let the film roll while Astaire does his dance thing, and Shaw does his bandstand thing. While today’s young cinema audiences might find a lack of cuts a chore to watch, considering that the average number of edits in a modern film ranges in the thousands, the more discerning viewer will find a simple, elegant magic awash on the screen. Occasionally, the camera will tilt and pan as characters run or walk through a shot, and the close-ups on the main cast, especially Goddard in the more romantic moments with Astaire, are famously cliched. You know, the soft light, the slightly raised camera ensuring the female star must tilt her head back slightly, allowing her neck to appear longer and that sparkle to appear in her eye: it’s all here. But the framing and perfunctory camera angles (which almost never vary from a waist height angle, truth be told) allow the actors to bring their performances to the screen, rather than any kind of cinematic trickery (much in vogue by a certain Alfred Hitchcock!). Potter’s use of fade-to-black is distracting, although I can’t determine if this was a product of the time or something intended. Film reels tended to be shorter back in the early days of film, so a fade to black was a clever way of reducing the glaring jump to a new reel in the cinema playback. It also gives the film a “chapter” feel, a kind of methodical storytelling design that, if taken in the wrong way, can be quite annoying.

But where the film really shines isn’t in it’s comedy, which I have to admit is average at best. No, for Second Chorus the true standout is the music, which was contributed to by Artie Shaw himself, along with the legendary Hal Borne (Wiki him sometime and prepare to be gaggled at just who this guy worked with!), and the equally legendary Johnny Mercer, who wrote the lyrics for the magical Moon River, sung in Breakfast At Tiffany’s, and co-founded Capitol Records. Shaw, who plays himself in this film, often said that Second Chorus turned him off acting completely, probably due to the serious nature with which Astaire famously crafted his career, his dedication to each role perhaps signifying that Shaw wasn’t ever going to be that good as a thespian. I have to say, I think Shaw does a rather fine job as himself, which goes a long way to arguing for stunt casting in a film. He plays a fairly benign version of himself, I think, in that he never competes for Ellen’s attentions (and he should, considering he’s a good looking man in his own right and could possibly have had a shot, had he been game) and isn’t really too vindictive when Danny and Hank upset and upstage each other during a live audition during a set. But again, it’s not the acting here that you really want to see. It’s the music and dancing.

Second Chorus isn’t trying to be a great Hollywood film, or even a great film generally. It’s a simple musical comedy, and to try taking more from it is to short-change yourself. Sit back, appreciate the dry wit with which Astaire and Meredith deliver their lines, check out Goddard’s somewhat lithesome frame against the wonderful lighting, and production design of Helen Taylors wonderful costuming and Boris Levens art direction, and imagine yourself back in the 40’s, when everybody wore a suit (or a tux) and women dressed conservatively. To see Fred and Burgess working in a film this mediocre is somewhat of a shame, and the talent both on-screen and off should have made this movie a cracker, but it’s half-hearted overall and this is disappointing. Still, you can do a lot worse.