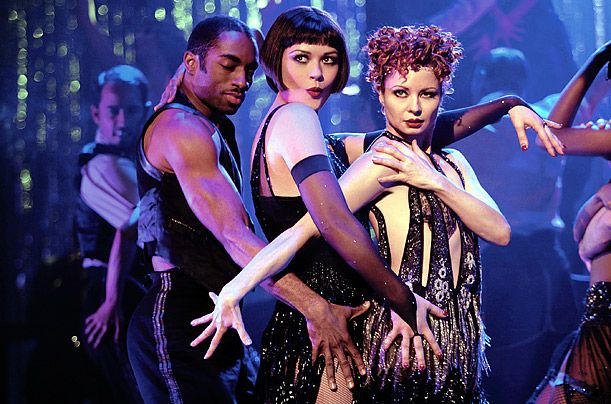 Winner of Best Picture at the 2002 Academy Awards, Chicago is a delightfully artistic, musical extravaganza based upon the stage musical of the same name. Featuring star performances by Catherine Zeta-Jones (who was pregnant at the time of filming, apparently), Richard Gere, chipmunk-cheeks herself Rene Zellweger, and a truly exceptional John C Reilly, Chicago is a fast paced, well made version of the famous story. Set in the titular city in the early 20’s, young starlet Roxy Hart visits a club to watch a performance by Zeta-Jones, while her lover is (apparently) seeking to get Roxy a gig at the place. When Roxy discovers here lover is only interested in her for sex, and has no intention of getting her into a show, Roxy kills him in a fit of pique, her dreams being shattered before her eyes. However, killing the man makes her more famous than she could have dreamed, as her story makes the front pages of the local papers. Roxy’s husband, Amos (Reilly) tries to take the rap, but when he discovers that his wife is cheating on him, sends her down the river.

The fame Roxy seeks, which has come to her now she’s a killer, is hard to maintain in prison, where she’s leaned on by the head matron, “Mama”, played by Queen Latifah. Using bribery and sex to achieve their ends, the women of this prison engage in a cat-and-mouse fame game with the paparazzi of the city, each striving to become more “infamous” than the other and thus secure their release at the mercy of the court. Roxy, believing herself to be up for the death penalty, acquires the services of Billy Flynn, local super-lawyer who promises to get her out of the clink and back to making money as a famous ex-inmate, and murderess. Roxy becomes a little full of herself, thinking she’s all that, when in fact, the power to grant her fame rests squarely with those on the outside, and her haughty demeanour soon comes crashing down when others become more famous then her. Faking a pregnancy buys her a little time, but it’s fast running out. Together with Flynn, Roxy fanagles a way to get out of prison, however, she soon finds that her fame wanes quite quickly.

Chicago is a great film, period. It was only a matter of time before Hollywood got it’s claws into the famed musical. Honestly, I’d never seen or heard to much about the original musical, prior to seeing this film. I knew of the shows most famous number, “And All That Jazz“, which is a truly iconic piece of music in the theatre world. But I hadn’t actually had any experience with the story as such, and so, when viewing Chicago for the first time, was pleasantly amazed at just how cool the thing was.

Rob Marshall’s thunderous direction of the musical numbers, especially during the opening sequence of All That Jazz, and the famous Cell Block Tango, goes for a vivid, “wow” factor, which really captures your attention and prepares you for the style of film your about to see. Musicals, where people on screen often break into song in the middle of a dialogue sequence, can bee seen as a little kitschy by younger, modern audiences, who are more attuned to seeing this occur in Disney cartoons. However, with the recent resurgence of the popularity of musical films, and their acceptance into the mainstream, this cinematic convention is now accepted and appreciated by those watching the film.

If I was to be utterly truthful with you, loyal reader, I’d have to submit to you that I detest Rene Zellweger, not as a person, but as a screen “beauty”. I find her looks utterly unattractive, personally, and due to the fact I find her acting style bordering on high-school play quality, I generally avoid film’s she’s in. Sounds awfully shallow, I know, but every time she smiles, her eyes disappear behind her cheeks, which makes watching her eyes particularly difficult. Yeah, we all know she managed to bag Jim Carrey at one point, but that shouldn’t mean she gets all the great acting roles forvermore.

The fact that I find her unappealing as a “talent” doesn’t mean her ability as an actress is reduced: on the contrary, she’s able to deliver a performance that has both depth and realism, even if it is in a musical show like Chicago. her naturalness and refreshing innocence in front of the camera is what has endeared her to her legion of fans. Her portrayal of Roxie Hart is dead on the money, a perfect combination of guile and minx, the kind of woman you’d almost expect in the 20’s. Zellweger was nominated for an Oscar for her work here, and in one of those rare instances where I have to bite my tongue and simply nod in agreement, I have to agree with the Academy with this.

Catherine Zeta-Jones also acquits herself well, in the supporting role of Velma Kelly, another murderess imprisoned for killing her sister and husband after she found they were having an affair. Zeta-Jones is your classical Hollywood beauty, enormous eyes surrounded by pale skin, topped off with a great figure and some dazzling hair. Here, she plays that up to the max, her pouty, crafty performance akin to some sort of witch-ish cackling, delighting the audience with her disdain and almost conscience-free lifestyle. Her singing voice ain’t so bad either. her rendition of All That Jazz, as well as I Can’t Do It Alone, where she tries to convince Roxie to start up a double act with her, are powerful and well executed. I cannot claim to be an expert on singing, since my own voice sounds like a strangled kitten, however, in laymans terms, I’d say she nails it. And watching Zeta-Jones strut about in that black latex during the films opening number is breathtaking. Zeta-Jones won herself a Best Supporting Actress Oscar for her part here, and while I think Queen Latifah’s Oscar nom for Mama in this film was perhaps more worthy, I am glad one of them got the nod. The competition for that Oscar was fierce that year, given Julianne Moore, Meryl Streep and Kathy Bates were also up for gongs in the same category.

Somebody I had great reservations about, going into this film, was Richard Gere. In the same way I felt about Ewam McGregor in Moulin Rouge!, I thought he was an inapporopriate choice for the role of Billy Flynn, the toothy, smarmy, self-obsessed lawyer who makes a living out of showy trials for people of questionable guilt. However, I am glad to say he has proven me wrong in my doubt. I don’t have any reservations about saying that he is a terrific Billy Flynn, and Marshall has directed him well in his screen performance. Gere’s natural screen charm is a perfect foil for Zellwegers innocence, the two playing off each other with an ease that’s reminiscent of the old Hollywood musicals of the 50’s and 60’s. Throw in a particularly layered and heartbreaking turn from John C Reilly as Roxy’s meal-ticket husband, Amos (especially in his solo musical number, Mr Cellophane, which is staggeringly brilliant), and you have yourself a great cast, doing this classic musical complete justice.

Marshall directs the film with the utmost style and panache, his eye for lighting and choreography, as well as the conventions of cinema itself, is superb. From the sets to the costumes, the lighting and the camera movement, Chicago is a tour-de-force of how to make a great film. While the film does sag slightly in the middle act, this doesn’t detract at all from the overall triumph of a film that sets out to enthrall and entertain for it’s entire runtime. You’ll have your foot tapping throughout, and that’s probably the highest recommendation I can give you.

Chicago is an unadulterated good time. It plays on the fixations of fame that never seem to wane, and what lengths people will go to, and how much of their soul they’ll sell, to achieve it. Stylish, brash and enthusiastic, this is a grab-you-by-the-collar musical that, unlike a few other films of recent times, actually deserves its Best Picture Oscar status.