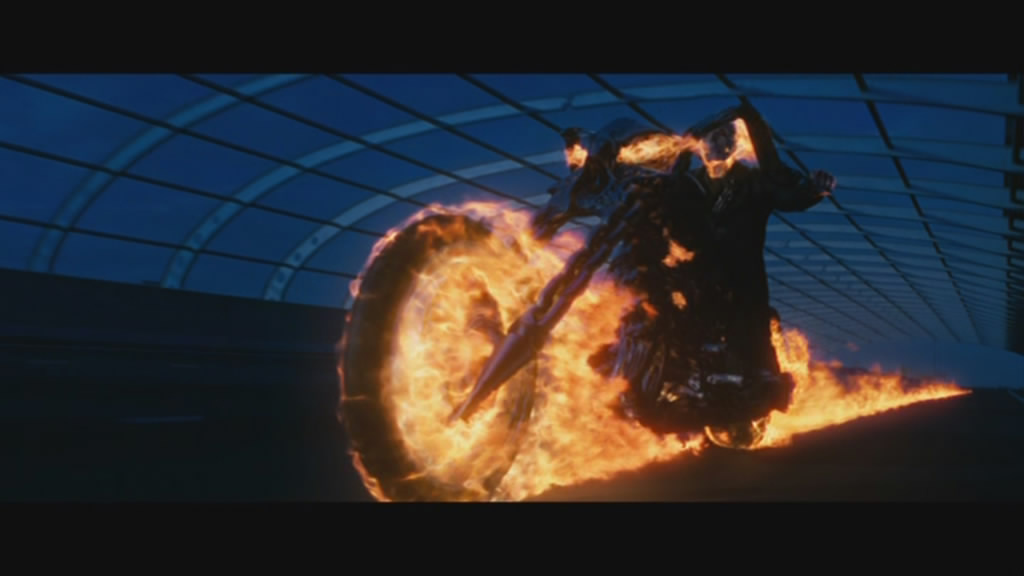 Review : Abysmal comic-book film that should have been awesome, is instead a tired, dreary and almost incomprehensible mess. Lacklustre beginning only gets worse as it goes along. None of the cast are aware of how stupid it all is, and it’s a shame, because they play it so seriously it’s painful. Flat direction and awful script ensures this is bottom-shelf garbage for all eternity. For fans of the character only, and even then, you’ve been warned.

Laborious telling of the Ghost Rider comic book story, with Nic Cage doing his best po-faced emotionally tortured routine (yet again) as he sets about battling demon Mephistopheles for control of an ancient curse. Ghost Rider was always going to be a hard sell, for me at least, as I always felt it was one of the least accessible Marvel comic book characters, and after watching the film, I think I have been proven right.

Directed by Mark Steven Johnson, the man behind scripts for Daredevil and the lite-weight Elektra, Ghost Rider is a strangely hollow film, lacking in any kind of structured character development and quite obviously cut to ribbons during post production. The film gives off a vibe of being incomplete, almost as if they ran out of time and just went “well, screw it, we’ll shove this out and see what happens”.

Problem is, Ghost Rider is such a cool idea, that had it been executed well, would have easily become one of the great “dark” comic book movies. We’ve had our fill in recent times, with The Punisher, Spawn and Daredevil telling stories of human souls being tormented, lost and overcoming the odds. Still, it goes to show that these kinds of films must have a limited audience, as none of the aforementioned films performed well at the box office.

Johnny Blaze is only a young man when his father, a stunt rider doing motorcycle tricks, is killed after Blaze strikes a deal with the devil, Mephistopheles. Growing up knowing that he will one day be called upon by the demon to fulfill his contract, Blaze becomes obsessed with the occult, and depressingly morose about the death of his father. Cage imbues the character of Johnny Blaze with a more righteous sense of good and evil, unlike the comic book characters rather loose definition of such things. Whether this is right or wrong for the character is probably not really the point: the fact of the matter is Johnny Blaze comes across as such a shallow portrayal, thanks to a clichéd and awful script, that you don’t care one way or the other. Eva Mendes, playing Blaze’s romantic interest Roxanne, is a lot better than the script deserves, although even Mendes is hamstrung by the ludicrous lines she’s forced to spout.

American Beauty star Wes Bentley is awful as Blackheart, a rogue demon (if there is such a thing) intent on claiming the curse for himself and ruling the world. Which is always the way. Bentley grimaces and howls his way through the film, lacking even the most basic screen presence as an evil dude. Sam Elliot is again typecast as a cowboy type, looking after a cemetery and filling Blaze in on his new role of the flaming Ghost Rider. Elliot needs to get a new shtick, really. It’s getting old, real fast. After essentially playing the same role in this film and The Golden Compass, plus a whole slew of other films he’s been in, he’s essentially become a parody of himself, a walking cliché for director’s to pull in when required.

Perhaps the most remarkable thing about the film are the stunning effects, particularly the Ghost Rider flames, and the motorbike used throughout the film. The flame effects are amazingly realistic, and add a sense of menace to a character that needs it to get his point across. The problem is, the rest of the film cannot possibly hope to use this to keep the story cranking along. The film meanders wistfully between setpieces and truly diabolical dialogue scenes between Cage and Rozanne, and Cage and everybody else.

There’s almost a sense of half-hearted-ness about the whole show: it’s slow, lacking in pace and energy, and ultimately comes across as unfulfilling. The action scenes are almost in slow-motion, they move so slowly, with almost no sense of threat and vitality, which is death on screen for a film of this genre. The breathtaking flames and effects help a little, but not enough to save the film.

Johnson seems to lack the ability to coherently direct a conversation, although he has mastered the grandiose wide shot quite well. Problematic scripting means that nobody on screen really ever gets a chance to lift the film above mere mediocrity, and it’s a shame, as the concept could have been done so much better.

The script is dreadfully stupid, with dialogue so inept and wooden it’s impossible to understand or even like the characters, and director Johnson lacks the ability to put together an action sequence worthy of the Marvel branding. Ghost Rider is an exercise in effects over story, in a concept that sounded cool but needed a lot more work to pull off properly. Dreadful.