I want to spend a moment, if I may, discussing a topic that I feel has been set aside for far to long. It has to do with film classifications (ratings) and the slow creep of inadequate, incorrect ratings for childrens films

Here in Australia, we have a 8-teir classification system. Most people are aware of the major ones, like G, PG, M, MA and R. The one’s a lot of people aren’t aware of, or ignore, are X, E, and RC. X rated material, usually pornography, is found in certain states of Australia, and can be purchased legally online and via selected outlets in those states. E rated material is usually material of a nature that is exempt from classification: that is, contains no material that will be offensive to anybody at all, or objectionable in anyway. Childrens programming and selected documentary material is often classified E. RC, which stands for Refused Classification, is material which cannot be rated under the current guidelines used by the Classification Board, which means that the material cannot be shown, sold or otherwise displayed in Australia. RC, which is essentially banning said material, has been used extensively by the Classification Board in recent times, and while appeals can be made to a film or product which receives an RC tag, invariably this is upheld in most cases.

While the topic of banning films with subject matter that is controversial is an article all on it’s own, I felt it necessary to touch on the unique nature of childrens classifications, and what I percieve as a slow creep of incorrect ratings used by the Board currently.

Recently, I watched the Disney movie version of Aladdin, a great film filled with wonderful songs and even better animation. While watching it, I was struck by the violent and dark nature of certain scenes, and wondered what it was rated. It’s rated G, which, by definition is suitable for general audiences. There was no subclause to that, ie the statement that “some scenes may frighten very young children”, which worried me given that at one point in the film, the villain looms over the heroine and proclaims that the hero is dead after being beheaded. Dark and sinister, and for some reason, it struck me that if I was to have a young child, this would be a concerning theme I wouldn’t want to broach with them until they were older.

The concept of beheading, like most violence in animated films, is treated as simply a storytelling device by filmmakers in this instance. Now, in Arabic culture, common punishments for criminals include stoning, beheading and having your hands cut off. This is a traditional stuff that’s been going on for centuries. While I doubt the inclusion of this kind of material is valid in context, one has to wonder if it’s entirely necessary in a film watched by impressionable young children. This kind of material may be fine in the country they are portraying, but is it suitable for children from a country where this stuff isn’t. 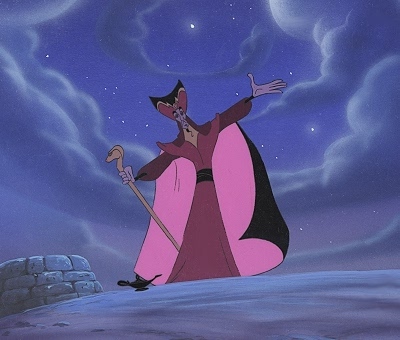 Violence in animated form has long been the whipping boy of anybody wanting to discuss censorship: the Looney Tunes are a prime example of entertaining our kids in the most violent possible way. Strangely, though, the concept of verbal violence is hardly mentioned. Threats by characters to commit acts of violence, in a tone and style not in the least comical, are often brushed aside as we think that showing an animated rabbit firing a gun at a reprobate duck is more horrifying.

Yes, the way characters talk to each other is of equal importance, and it raises a valid question: if we are prepared to show our children violent animated material, which we assume is harmless due to the fact that it’s “animated” and not “real”, what do we do when those very same animated characters start threatening to do all sorts of violent things to each other. Our “monkey see, monkey do” children may wander out into the schoolyard and say the same thing to their friends, which could lead to all kinds of unpleasantness.

I take umbrage to the scene in Aladdin in which Jafar, leaning over a cowering Princess Jasmine informs her that Aladdin is dead, by beheading, which in terms of it’s visual style is not overly violent, but the intensity with which it is drawn and spoken leads to a very dangerous emotional state for children watching it. Should this film be categorised (as established by a G rating) suitable for all? Would you let your kids watch a film in which one of the characters makes a statement about beheading? Perhaps if they discussed rape on Hi-5 we’d all stand up and applaud them for broaching topics our kids need to know about? Crikey, that’s a big leap from Stranger Danger. There’s a reason Captain Feathersword is named just that on The Wiggles. His sword is a feather, and it’s about as dangerous as melted butter.

How many other films have dialogue in them that is unsuitable for young children? And does our classification board rate the dialogue in a kids film as much as the latest Eddie Murphy swear-a-thon? Thematic dialogue can be as dangerous to our kids as showing violence, and we need to be careful what we allow our kids to hear as well as see.

Some films created in recent times have a rating that reflects this growing trend: the aforementioned “some scenes may frighten young children”, or something like that. Fair enough, you think. As a parent, you want to be sure that your kids aren’t going to have social or emotional issues after watching some of this material if it is indeed objectionable.

In the US, the PG13 rating was created after the release of Indiana Jones & The Temple Of Doom, after it was given the equivalent of an M rating before Spielberg and Co went to bat about what was suitable for certain audiences. Here in Australia, we have no such middle-of-the-road rating for slightly more violent material. Here, all the Indiana Jones films are rated PG, which means they’re suitable for all ages but adult supervision is recommended for viewers under 13 (I think). 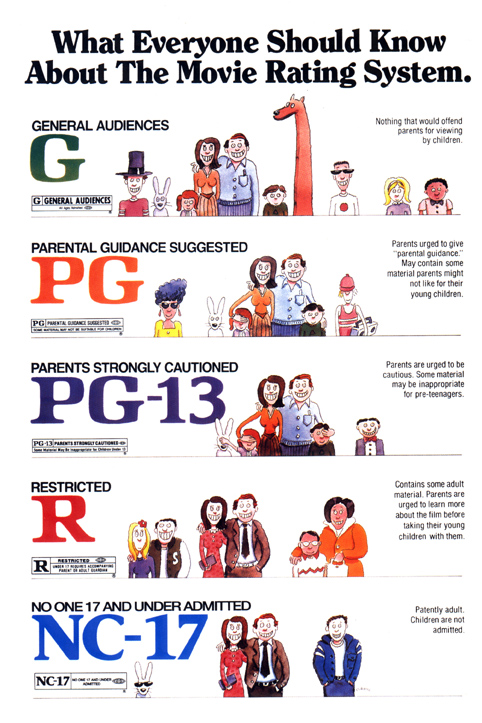 While I am old enough to objectionably censor my own viewing habits based on film ratings, children aren’t. They rely on us, as parents and sensible adults to make those kinds of decisions for them. The problem with classifications as they stand at the moment, is that in the lower categories of PG and G, they seem inadequately suited for the thematic material and dialogue that comes in some of these films. While classifications determining how many corpses litter the screen and how many F-Bombs are dropped throughout the story, when it comes to kids films, it seems that while we’re still hot on the bunny/duck gunplay, but less concerned about what they’re actually saying. I’m not saying that we should censor Aladdin for simply it’s dialogue, but we need to overhaul how classifications review films for children that tackle themes and contain material that were it to be physically shown would be equally objectionable.

I’d be keen to know what you think.

As a soon-to-be father, it would be remiss of me not to look at kids films and TV programming (most of which is harmless) and ensure that not only are my kids not subjected to seeing objectionable material, but also that they don’t get to hear stuff that’s perhaps a little overly unsuitable.