It’s hard for most to imagine, but I never really got into Joss Whedon’s stuff. Buffy as a TV series always had the taint of that godawful movie about it, so I never bothered. Even with a bunch of nerdy friends saying it was must-see TV, I never bothered. Angel, the resulting spin-off of a secondary character from Buffy,  was even less appealing.

Then came Firefly. Never watched it, knew all about it. When you are a sci-fi/movie/book/TV fan, you get to hear about controversies and well performing material. To be honest, the first I heard about Firefly was that it was also by Whedon, and had been cancelled by FOX in the US after broadcasting only 12 episodes, leaving two unscreened. 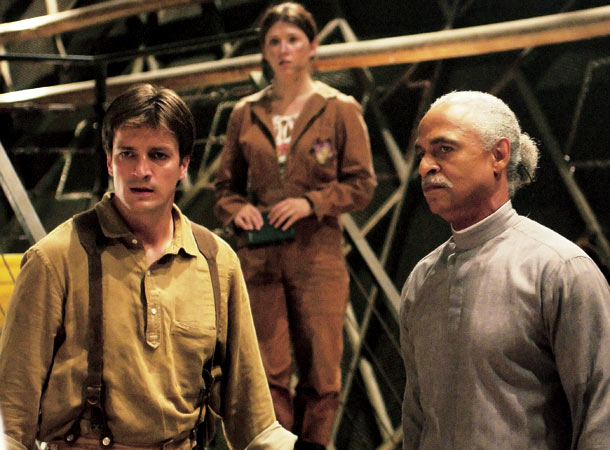 Clearly, this show is just brown.

Generally, when a TV series gets cancelled, it’s for low ratings, and apparently Firefly sufferred abysmally. Plenty of words and ink have been spilled about the why’s and the wherefores, which I will not specify in this forum.  Who cancelled it, why it was cancelled, and how come it never came back, are questions best left to more qualified people who were there at the time.

I wasn’t, but having now seen the TV series in its complete format, on DVD, I wanted to share my thoughts about it.

I would also briefly like to point out that the follow-up feature film, Serenity, I already had seen. Some friends whose reputations I hold in high regard as to the quality of movies they watch, told me it was the best sci-fi film they had seen all year (at the time it was released). When I got around to watching it on DVD eight months later, I found I had to agree with them. I watched the film knowing that it was based on a long cancelled TV series, so understood that I would not get all the little in-jokes, the subtle references to the TV series, yet still found myself smiling with delight at what confronted me on screen. 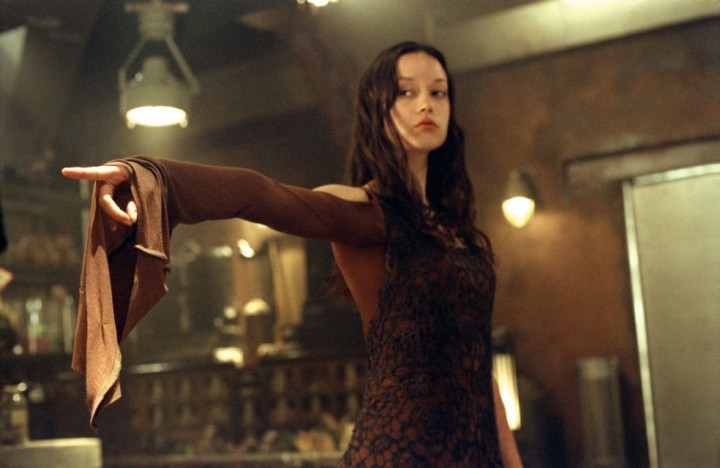 Look, over there, it’s imminent cancellation!

Cut to last weekend, where I watched all 14 episodes over a two day period, and I again found myself back in that wonderful universe.

Of course, if I were to recommend people watch the film before the TV series, it would be a substantial effort of subversive misconduct on my part. Serenity, as a film, is certainly more enjoyable if you have seen the show its based upon.

Firefly, the TV series, is a strange beast. A mix of western and sci-fi, with action, subtle (and not-so-subtle) sexual tension underplaying some of the characters, it dares to do what conventional sci-fi TV series out of the US do not. It grounds itself in a sense of reality that is, at first, unusual, and then liberating. 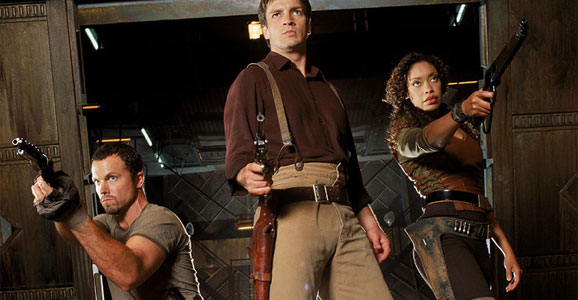 There are no aliens in Firefly. In any single episode, we see no alien beings. No Vulcans or Wookies of any kind. It’s all human, all the time.

The ship, named Serenity, is a cargo vessel, and consequently has no armaments. Which means there are no blazing phaser fights, photon torpedoes or green beams that crisscross the screen. The occupants of the ship have to rely on wits and subterfuge (and occasionally, talking) to get out of peril.

One of the characters is a hooker.

Sounds like an intriguing show, right? Firefly manages to be humorous, subtle, and gleefully anachronistic all in the same moment.

According to the show, the two major civilizations at the end of the century where China and the US, who formed an Alliance (subtle hint at the Empire there, methinks) which essentially divided the Galaxy into political factions. Of course, there were those who opposed said alliance, and consequently war broke out. 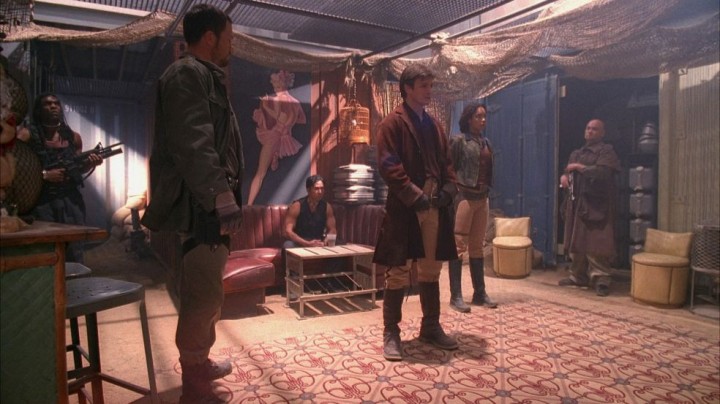 This day just gets better and better.

Firefly takes place several years after this war, when humanity is spread far and wide throughout the galaxy, and the series generally centers around the fringes, the lesser populated worlds, to paraphrase from Obi Wan, around hives of scum and villainy.

Mal, the captain of Serenity, leads his eclectic and rag-tag crew from one misadventure to another, seeking to build their meager fortunes by taking cargo jobs others won’t touch.  Legality isn’t always a high priority either.

Along for the ride is the ships pilot, Wash, and his wife (and second in command on the ship) Zoe. Jayne, the thug of the ship, is less of a crew-member and more of an unknown quantity, ready with fists and guns, rather than conversation. He’d sell his own mother for a buck.

Mechanic Kaylee keeps Serenity running, amongst other things, and when she’s not trying to make her feelings for the ships doctor known (Simon) she’s in her room contemplating life and all that. Simon’s sister, the crazy River, has recently been rescued from imprisonment at a government facility, where she was experimented upon and consequently suffers from what appears to be schizophrenia. A traveling religious man, Shepherd Book, comes along for the ride, although he is not quite the man we think he is bu the time we get to the shows final episode. 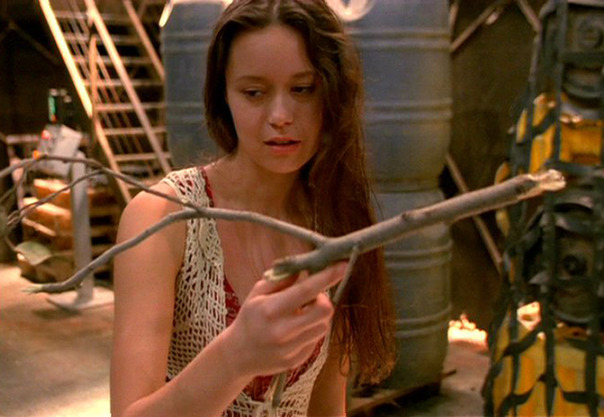 Remember me mentioning the bit about the hooker? Well, she’s there too, except in this series, women who offer themselves for profit are known as Companions, and it’s now a legitimate business. They even have their own union. And boy, is she hot! Hubba hubba!!

Inara, the Companion, harbors feelings for Mal, the captain, although will not admit it to his face, and of course, Mal’s feelings for her are kept hidden.

The problem with Firefly as a series, is that it’s left unresolved, which is perhaps the greatest crime of all. It must be said that by the time the credits roll on the end of episode 14, you are left with a profound sense of emptiness at not being able to see what happens next to these characters. Unless you watch the film, in which case, you will. But it behooves me to point out that a film should not be merely a continuation fo a series in itself. Ideally, the TV show should have run its course, had a finale episode where a lot of loose ends are tied up, before embarking on new adventures in a film; instead, the film relied heavily on those who had seen the TV show in order for it to be successful.

So be prepared. You will watch this show and come to love and care for these characters. But knowing that 14 episodes is all there is, is simply heartbreaking. Oh, what might have been, had it continued.  The care and affection that went into the show is palpable, from the scripting (which, truth be told, is dynamite!) to the effects (which are occasionally hit and miss, but effective) to the casting (I doubt I’ve seen a TV show cast this well); everything about Firefly crackles with an energy and class that put it in a league of it’s own. 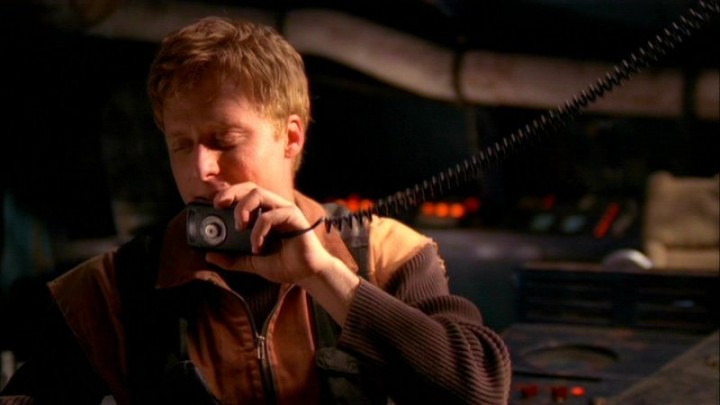 It boggles the mind as to why FOX, in their infinite wisdom, didn’t see how good this show actually was, and persevere with it. Whedon’s track record with success had, until this point, been unblemished. Buffy and Angel were going great guns, and here was another successful, if somewhat obscure, formula that worked so well.

It’s a pity that we’ll never see more Firefly episodes.  I am thankful that we got to see what we did. Firefly is a TV show that, I think, transcends the genre pastiche it exemplifies; it is a show that can be enjoyed by anybody with a love of quality television. It’s easy to see why these 14 episodes spawned a feature film and rapidly growing cult following. I have to say, I am among that number.

And I might have to revisit my earlier thoughts about Buffy, too. Haven’t had this much fun with a TV show since… well… ever.